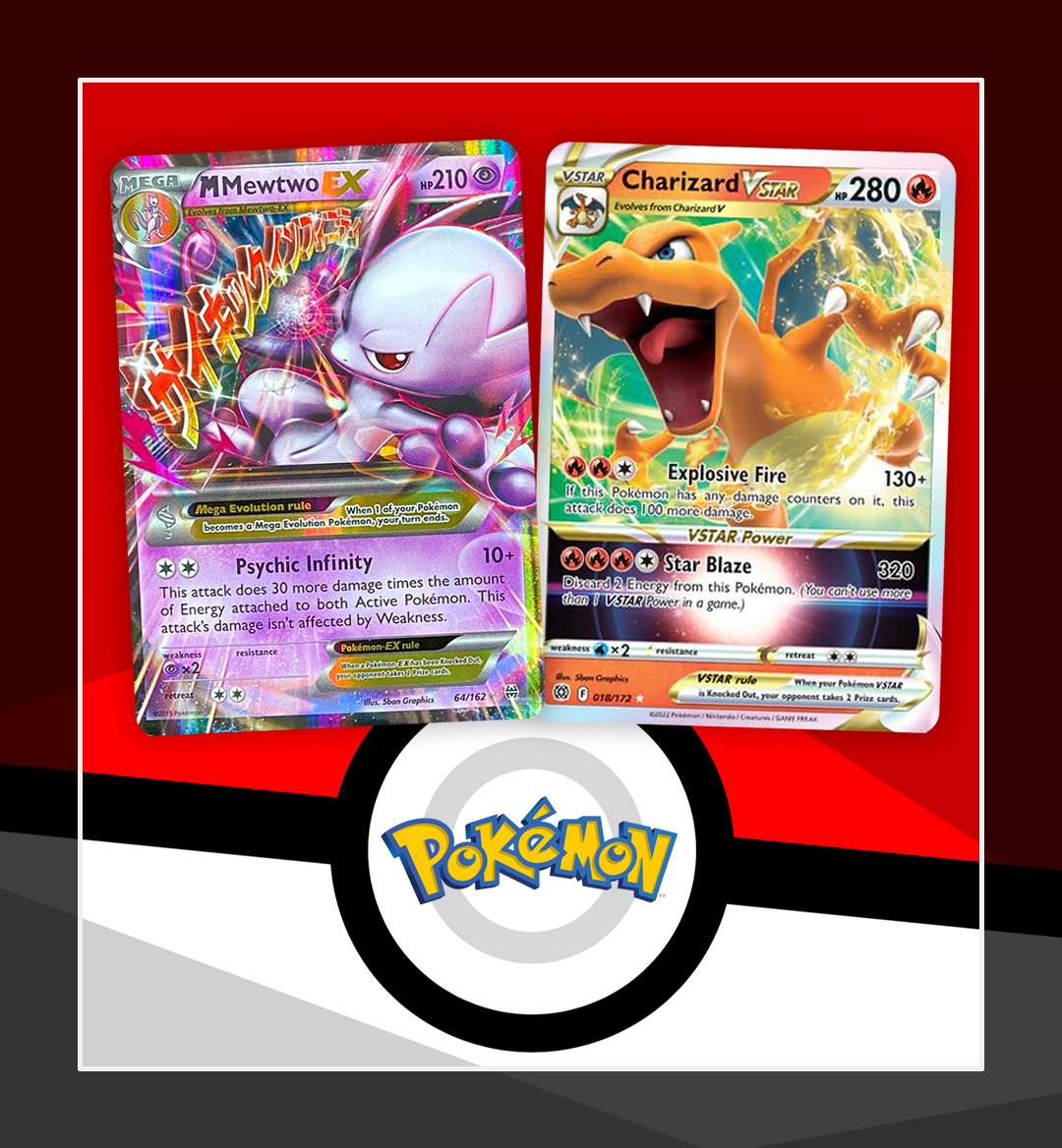 What are the most powerful Pokemon cards? Let's first discuss the franchise!

The Pokemon franchise is one that encompasses iconic video games, anime, merchandise and a beloved trading card game. While we’ve witnessed the TCG grow exponentially in its market valuation, many still stick to the roots of the game: battling. Some like to see their base set Charizards in a shiny PSA holder; others want to compete with their cards on a world championship stage. If you are in the latter category, this one's for you.

Related: The 30 Most Powerful Pokemon of All-Time

Sword & Shield, the latest main expansion series for Pokémon TCG, is at the tail end of its printing. Sets from the series like Evolving Skies, Fusion Strike, and Vivid Voltage were met with a great reception, giving collectors and deck-builders more characters to chase after. As a result, new high-HP cards have been added to the mix.

Today, we will be showcasing the ten most powerful Pokemon cards that you need in your deck. These are sure to perform well in battle, and they may be worth a pretty penny as well! 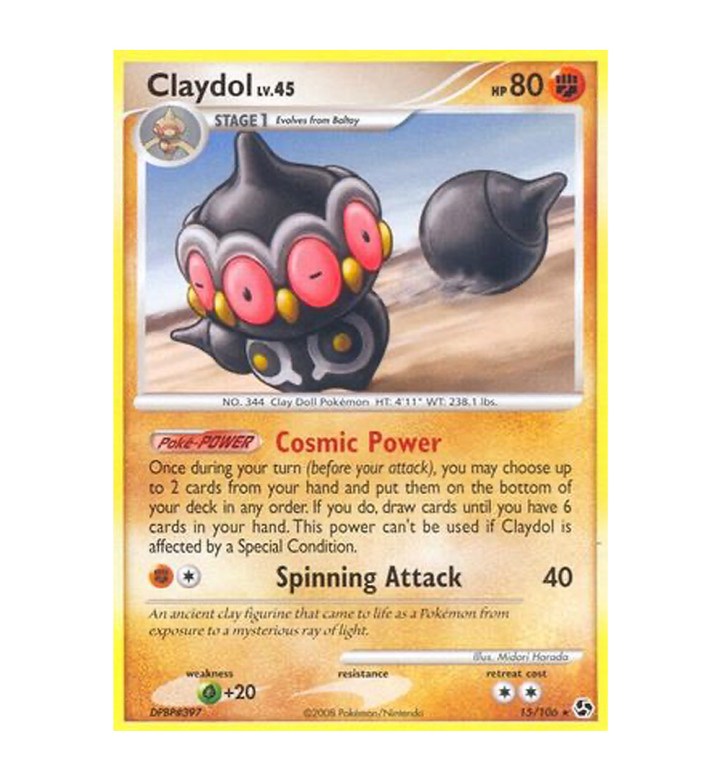 Collectors and battlers from the late 2000s will remember just how essential Claydol is to a deck. This card may not be much aesthetically speaking, but the “Cosmic Power” move is almost overpowered in a game. This ability enabled players to discard any two cards and then draw six more. You can see how easy it became to stack a deck and beat opponents.

This card was originally released in 2008’s Great Encounters set, but it was also found in the recent Celebrations set as well. Claydol can also be picked up for $2-3 online, marking an inexpensive yet powerful addition to a battle deck. 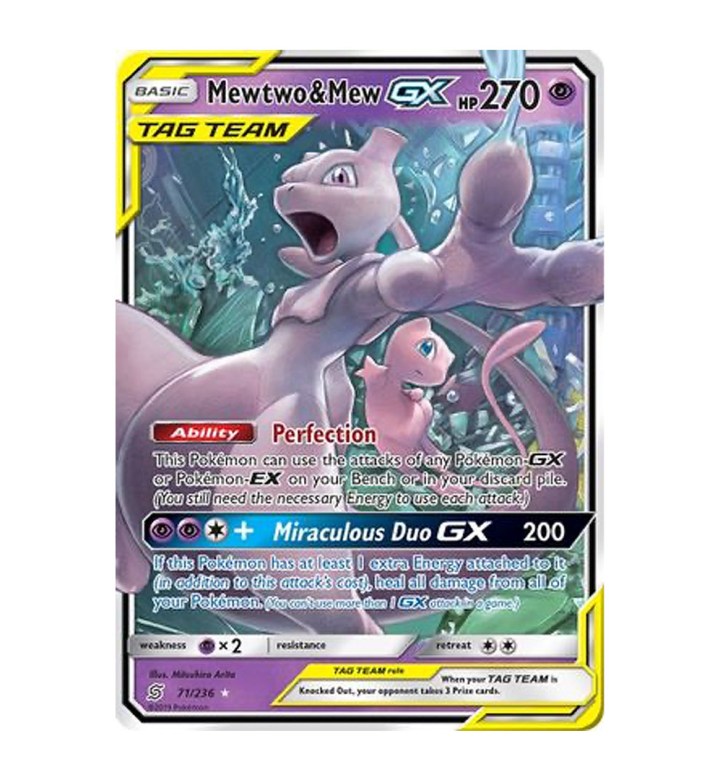 Here is another card with an exceptional set of moves. Mewtwo and Mew are both heavily revered and almost mythical in Pokémon’s lore. This tag team card possesses an impressive 270 HP, but it is the “Perfection” ability that has battlers raving. Perfection utilizes any move from a GX or EX Pokémon on the bench, creating a sneaky strategy in battles.

The card is also popular for everyday collectors, and it trades for around $15-20 based on condition. 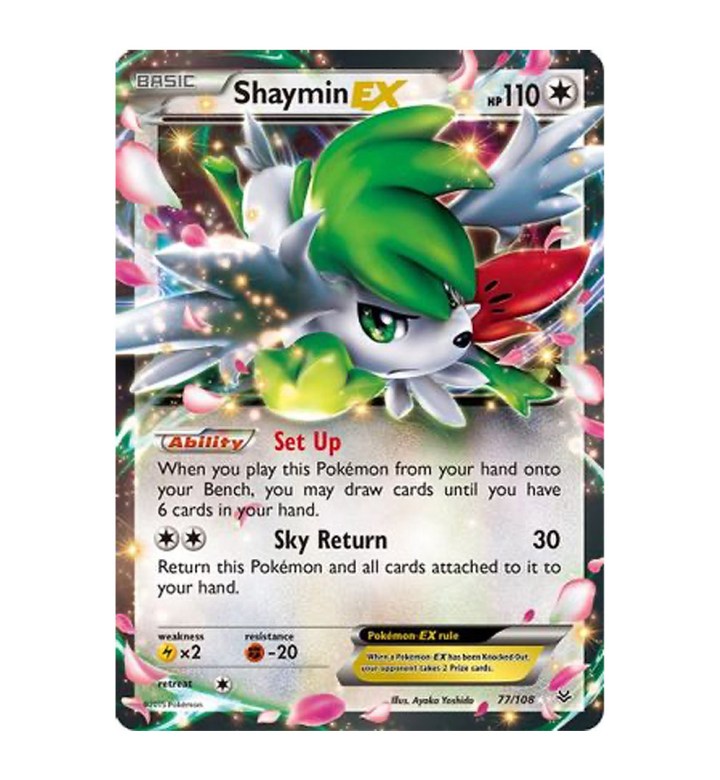 This Shaymin EX card is a perfect team player. Released in the acclaimed Roaring Skies set, Shaymin is capable of being exchanged for six cards once placed on the bench. This is extremely useful for players with an array of powerful characters in their deck.

The card can also be purchased on TCGplayer for $4-10 based on condition, marking a worthy investment towards winning battles. 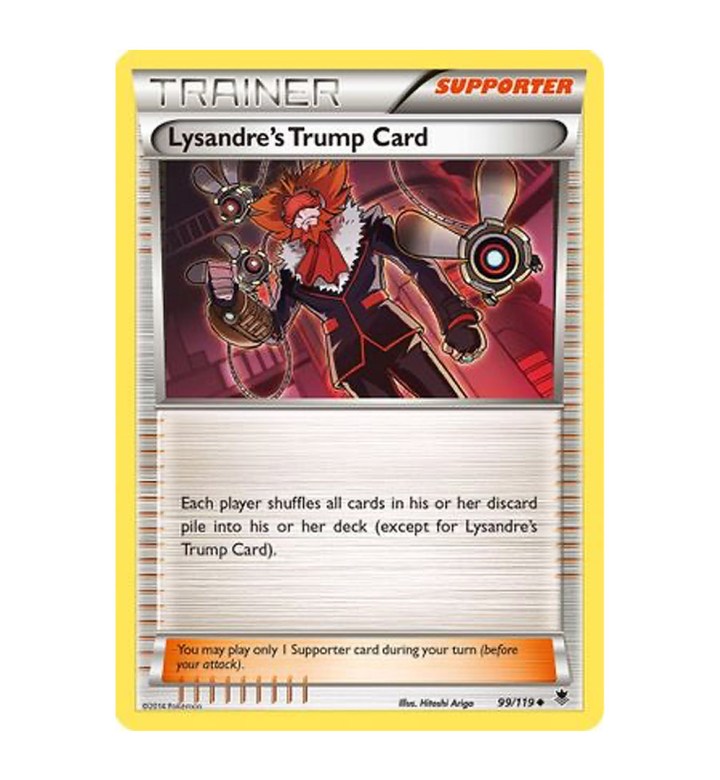 While this one is not a beloved pocket monster, Lysandre’s Trump Card packs a punch in battle. The only problem is that the card is so powerful that it was banned from competitive matches altogether; however, we still figured it deserved a mention on this list. Essentially, this card resets the match, as it forces every battler to reshuffle their deck. This is a huge momentum-shifter in gameplay, so we see why it isn’t allowed on bigger stages.

Since this is a common trainer card, it will only run players a couple of dollars if purchased online. Our only advice is to use the Trump Card responsibly. 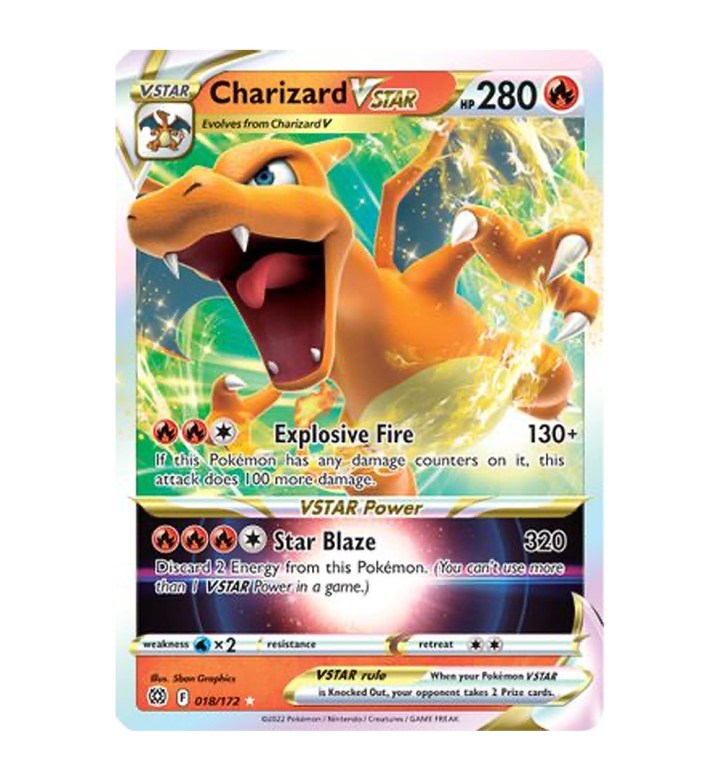 Another recent addition to the TCG, the Charizard VSTAR from Brilliant Stars was an immediate hit. Charizard has been one of the most powerful and collected characters since the first edition set, and this card highlights the dragon’s untamed power. “Star Blaze,” the card’s VSTAR ability, deals a whopping 320 damage to opposing players. However, it can only be used once during any given match.

This one trades in the $10-15 range online, so be on the lookout for it in local shops or in a Brilliant Stars booster box. 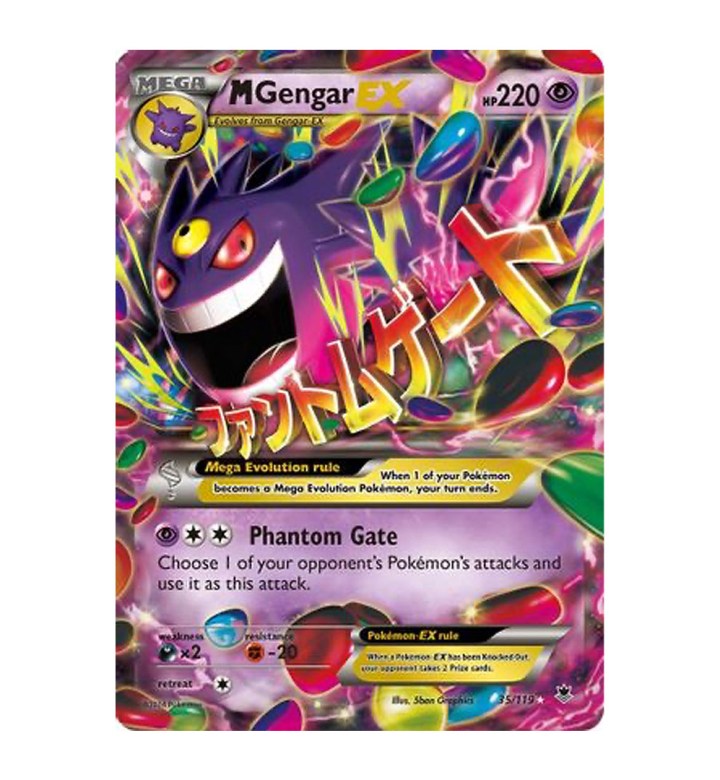 As a ghost-type Pokémon, Gengar always has a few tricks up its sleeve. In this case, Gengar swaps attacks with an opponent’s Pokémon, which can be deadly in battle.  This ole switcheroo will change the entire course of the match if your opponent has an overpowered card in their lineup.

This card, covered in remarkable artwork, is pricier than others on the list at $20-30. However, Gengar could be the difference-maker in your next battle. 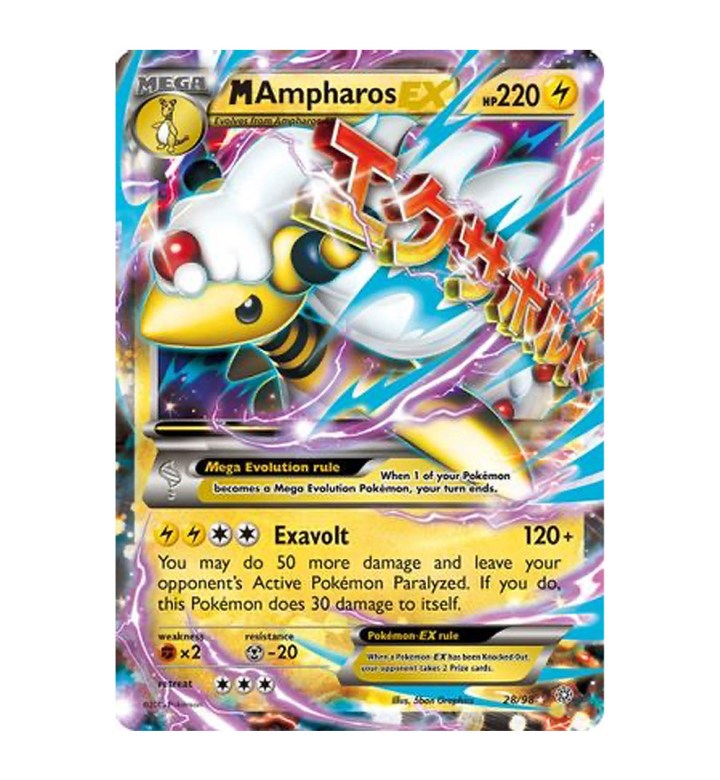 Ampharos possess the resourceful power to paralyze opponents with the “Exavolt” move. This gives the card a unique advantage in games, especially if your opponent has you on the ropes. The move does deal 30 damage to Ampharos, but the upside is just too much to not use.

You can find this card for $4-6 online, so it may be the best bang for your buck on the entire list. 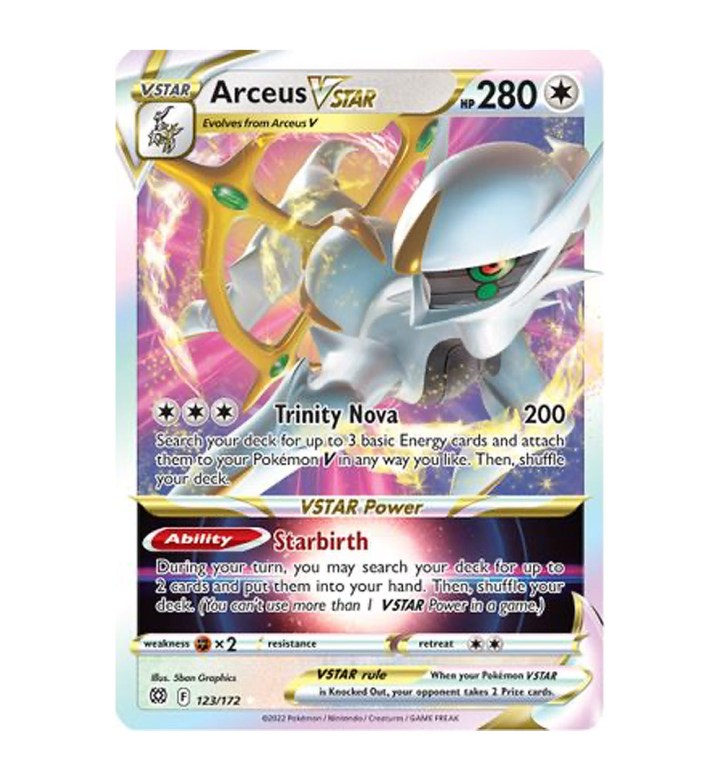 This Arceus VSTAR is another opportunity for players to use strategy for a chance to win. In addition to 280 HP, the “Starbirth” ability enables the owner to search their deck for any two cards that will go into the player’s hand. Yet, just as it was with the Charizard, you can only use your VSTAR power once in a game. Choosing the right moment is paramount.

This chaser from Brilliant Stars will only set you back around $10-15, so we recommend adding it sooner rather than later. 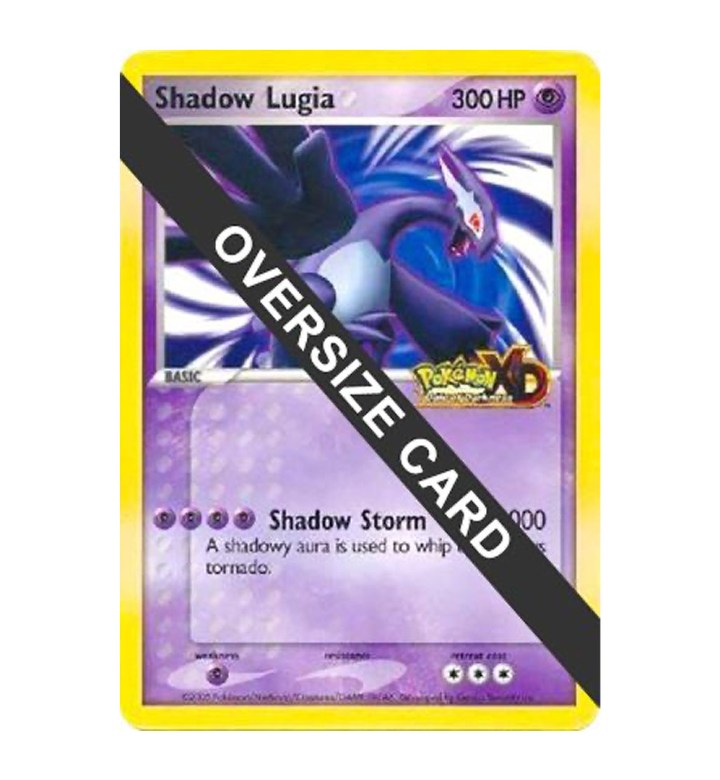 While this card may not be practical for the everyday deck, we would be remiss if we did not mention the Shadow Lugia. Released as an oversized promotional card, this psychic/legendary combo can deal 1000 damage to opposing pocket monsters. A number that high is almost unheard of in battle, so you may want to pick this one up if you want to leave a mark in matches.

Since this promo is a bit rarer, it sells for $150-250 on eBay or TCGplayer. Checking in with local collectors and shops is another way to track this mythical Pokémon down. 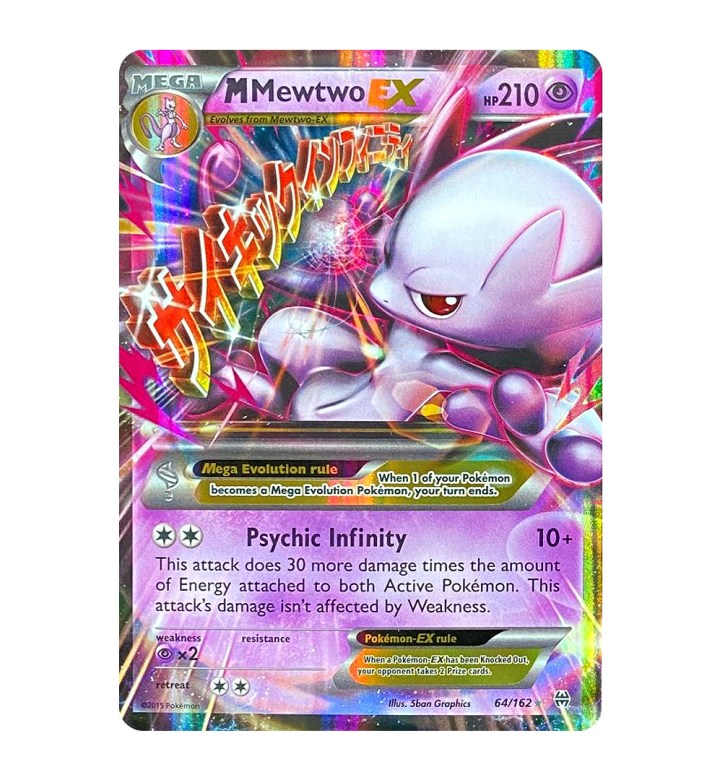 Finally, number one on our list of most powerful Pokemon cards, we have this Mega Mewtwo EX, a card that wields one of the most absurd abilities we’ve ever seen. “Psychic Infinity” does 30 more damage times the number of energy cards attached to the Pokémon on hand. If you’ve stacked some energies and played your cards right, this move can single-handedly win a match.

This card also possesses striking designs, and a holofoil version can be acquired for $6-10. If you are building a deck, it is plain and simple: you need this card.

Did we miss any must-haves for the battle deck? Let us know @CardTalkPod on Instagram and Twitter!

How many of the most powerful Pokemon cards on our list do you own? Shoot us a message on Twitter @137pm and let us know!