The 11 Top Trading Card Companies to Look Out For 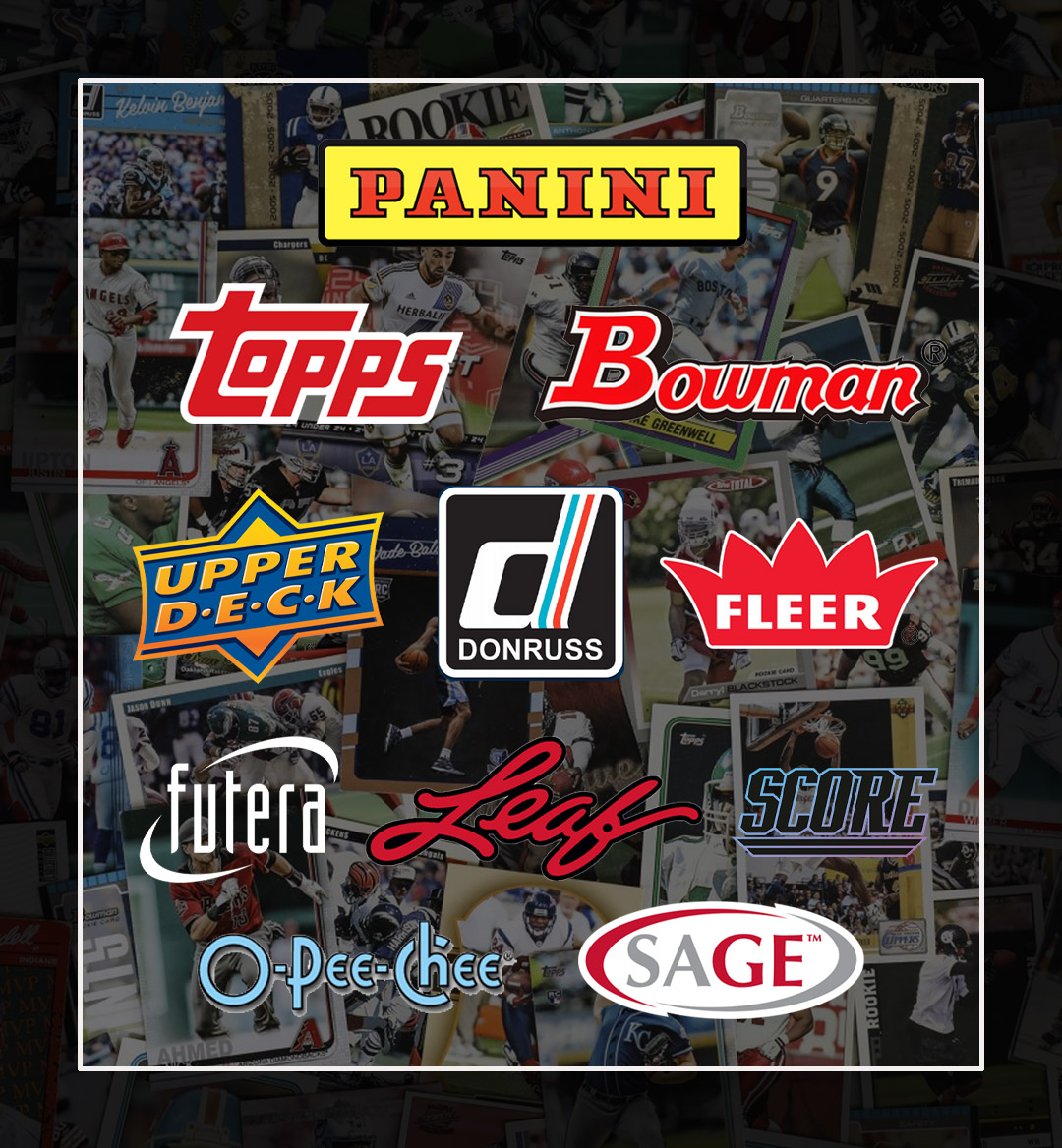 Wondering what the top trading card companies are? In the hobby, the only constant is change.

Those who started collecting in the last ten years know all about Panini, the current leading manufacturer of NBA and NFL cards. But over time, the top dogs in the industry have frequently changed based solely around who was the current owner of the league licenses.

It’s important to note that the hobby is in the midst of yet another massive shift, with Fanatics set to take over the rights to three of the four major sports (NFL, MLB and NBA). Their first hobby altering deal took place in August of 2021, when they acquired the MLB rights away from Topps, causing their $1.3 billion dollar SPAC with Mudrick Capital to collapse in a matter of days. They would later purchase the sports and entertainment division of Topps, meaning that they will continue to produce the iconic Topps brand.

These new Fanatics licenses cut the leagues and their player’s associations in on the action as partners, a move that will likely ensure collectors even greater access to players, game worn memorabilia and autographs in the future. For the first time ever, the leagues and players will have some skin in the game.

While the future of the hobby looks very bright, let’s take a look at the top trading card companies of the present and past. 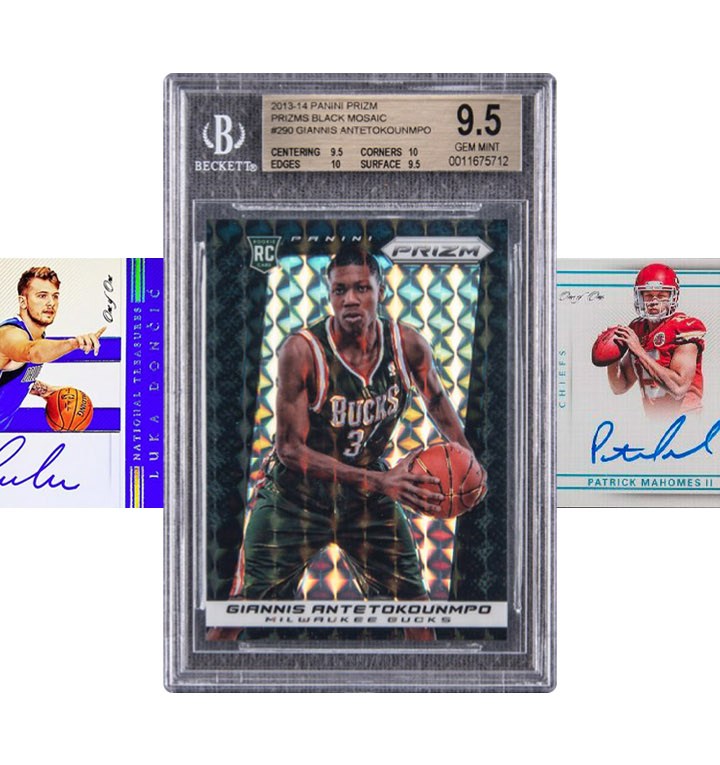 Perhaps none of these trading card companies have made as big of an impact in the modern era of the hobby than Panini. Originally founded in 1961, Panini first found its footing in the FIFA World Cup. The group partnered with FIFA in 1970 to produce a World Cup sticker collection, which is still manufactured today. These stickers have even served as rookie cards for prominent players like Diego Maradona, Ronaldinho, and Cristiano Ronaldo.

Many U.S. collectors are familiar with one of Panini’s subsidiaries, Panini America. They began printing NBA-licensed cards in 2009 after acquiring Donruss, another revered trading card company. This led to the creation and expansion of some of today’s most prevalent products like Panini Prizm, National Treasures, and Flawless.

A Luka Doncic rookie card sold for $3.12 million with buyer's premium, the most ever paid for a basketball card at a public auction.https://t.co/ab8zhdZzCg

Today, Panini remains one of the premier names in collectibles worldwide. They have kept their grasp on the soccer world while expanding into football and basketball in the U.S. While the state of the hobby may alter in the next few years, these aforementioned products will be sought after for years to come. 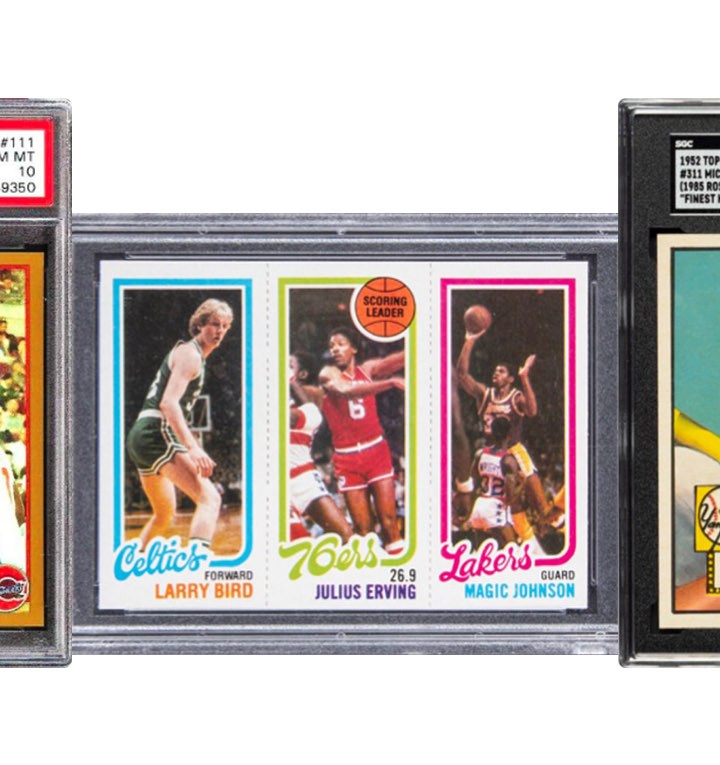 Topps began producing trading cards in 1950 as a way to increase sales of their flagship product, Bazooka Chewing Gum. These cards featured Western character Hopalong Cassidy. Their first baseball cards were released in 1952, with that set featuring the hobby’s most iconic and recognizable card, the Mickey Mantle rookie which recently sold as an SGC 9.5 for $12.6 million dollars.

The 1952 Topps Mickey Mantle SGC Mint+ 9.5 closes at $12,600,000, a world record price for any sports item. A huge night for The Hobby and sports collectors everywhere pic.twitter.com/A8nFVimLsP

Throughout the last 70 years, there have been many subsets under the Topps umbrella. We’ve seen the brand dominate the sporting world, but they’ve also delved into popular culture. Batman, Elvis, Luke Skywalker, and Queen Elizabeth all have a valuable card made by Topps.

Moreover, they’ve encouraged innovation with products such as Topps Stadium Club and Topps Finest, which were both huge hits in the 1990s. In recent years, the company has maintained relevance in Formula 1 and soccer. And of course, they still create quality baseball products with their flagship releases and Bowman Chrome boxes. 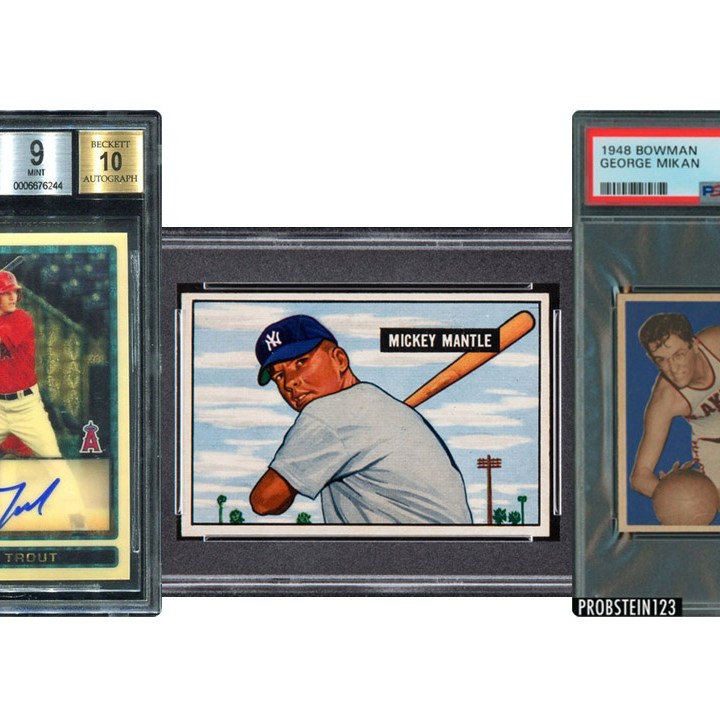 Bowman reached the height of their early popularity in the 1940’s, over a decade before Topps came on the scene. The 1951 Bowman Mickey Mantle is technically Mantle’s true rookie card, and even though it doesn’t command the type of value as the 1952 Topps, a PSA 9 sold for $1.4 million dollars.

Bowman actually sued Topps in Federal Court in 1951 over alleged infringement on their trademarks, unfair competition and contractual interference, but the claims were rejected by the court.

In 1956, after years of contractual fighting, Bowman was acquired by Topps, which shelved the brand for over 30 years before reintroducing it in 1989. These cards were bigger than normal Topps cards, with the chase being a rookie phenom named Ken Griffey Jr.

In the years following, Bowman has become a mainstay with Bowman paper and Bowman Chrome rookies typically being the first cards produced of young up-and-coming players. 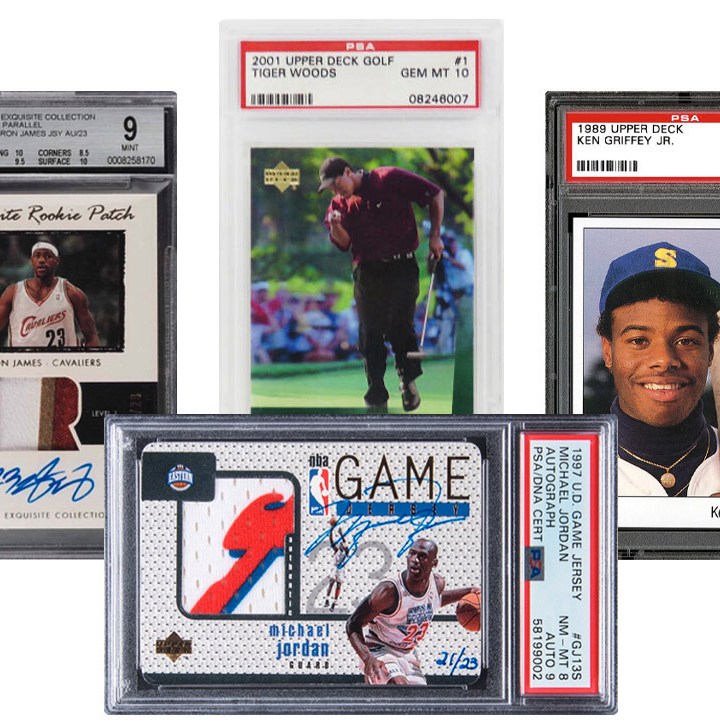 Upper Deck was founded in 1988 and introduced some brand new concepts and a greater attention to quality in the hobby. Their inaugural 1989 set featured foil wrappers instead of wax paper, as well as a small hologram on the back of the card that made it near impossible to counterfeit. The iconic Ken Griffey Jr. Star rookie card was in this set and is currently the second most graded card of all-time by leading grading company, PSA.

In 1990, Upper Deck was granted licenses by the NFL, NHL and NBA, becoming the first on this list of trading card companies in over a decade to own all four licenses at the same time.

Seven years later, they were the first company to introduce game-used swatches of jerseys into cards in their 1997 Upper Deck Basketball set. This completely changed the collecting game, and in 2003-2004 (LeBron James’ rookie year), Upper Deck Exquisite was born. Packs of Exquisite sold for $500/each, which was an astonishing amount at the time. They contained just five cards, including one rookie patch auto card numbered to either 99 or 225. There were also RPA parallels numbered to the player’s jersey number.

One of these LeBron James RPA’s numbered to /23 sold at PWCC in April of 2021 for a staggering $5.2 million dollars.

JUST IN: @PWCCmarketplace says it has sold a LeBron James signed rookie card for $5.2 million, ties sale of 1952 Topps Mickey Mantle for most paid for a trading card https://t.co/a4iDpcWOuE pic.twitter.com/5pPWA8Wmqe

Currently, Upper Deck only has the rights to produce NHL cards in the four major sports. They also produce some golf cards, as well as entertainment cards such as Marvel, Space Jam, AEW and a few other smaller sports.

They are currently most well-known for their exclusive memorabilia contracts with iconic athletes such as Tiger Woods, Michael Jordan, LeBron James, Wayne Gretzky, Connor McDavid and Serena Williams. Because of these deals, no other trading card company can include autos of any of these players in any set. Michael Jordan’s $14 million dollar deal that he signed with Upper Deck in 2000 included his trading card rights, meaning Panini has not been able to feature MJ on any of their cards. 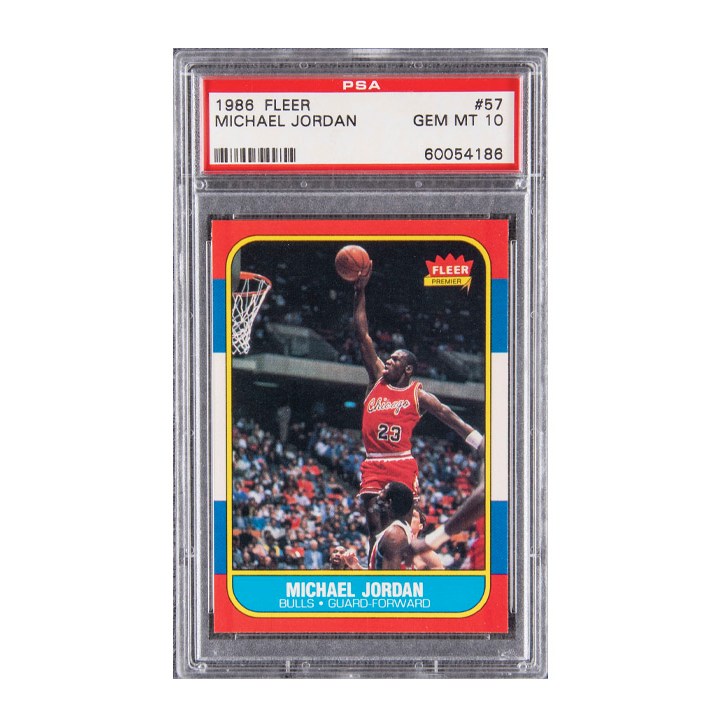 Fleer Trading Cards is a now-defunct company that was founded in 1885. They are rumored to be the first trading card brand to integrate gum into packs of cards. If you were dared to chew on a 30-year-old stick of gum from an old wax pack, you can thank Frank H. Fleer for that.

Throughout the brand’s history, they were a titan of the hobby and responsible for some of its most valuable cards. Widely regarded rookie cards of Michael Jordan, Wilt Chamberlain, and Jerry West all have a Fleer logo on them.

The company was eventually purchased by Upper Deck in 2005, but their influence on the hobby cannot go unnoticed. 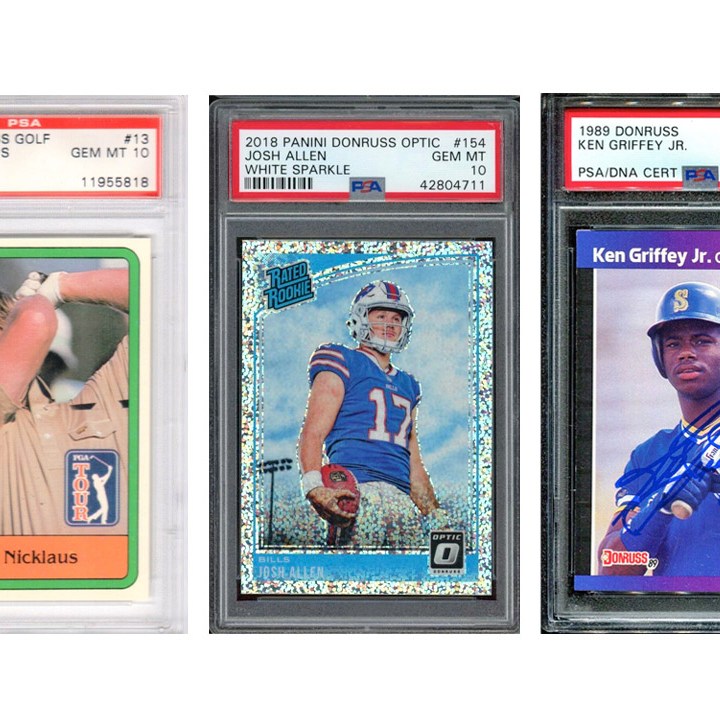 Donruss was another one of the major trading card companies of the 20th century. Founded in 1954, the corporation created many staples of the hobby today, including the “Rated Rookie” emblem.

We mentioned that the brand was acquired by Panini in 2009, but its name and likeness is still used today. Football, basketball, baseball, and soccer all have their own Donruss flagship product. Furthermore, Panini introduced Donruss Optic in 2016, a set that utilizes the iconic design of Donruss with an opti-chrome coating for the card. 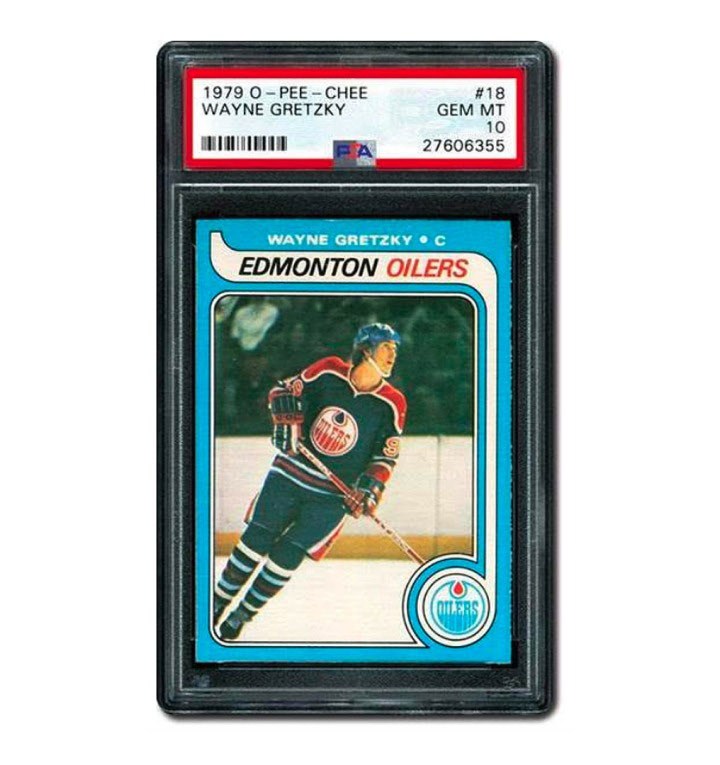 O-Pee-Chee, a brand widely known for their imprint in ice hockey, began creating trading cards in the 1930s. In that time, they partnered with Topps to release flagship designs with the O-Pee-Chee branding in Canada. The group had Canadian roots, so they were able to dominate collectibles in the northern markets.

The most popular and valuable O-Pee-Chee card is a 1979 Wayne Gretzky rookie. A PSA 10 graded example sold privately for $3.75 million. Today, the company no longer exists, but their name is still used for many Upper Deck hockey products. 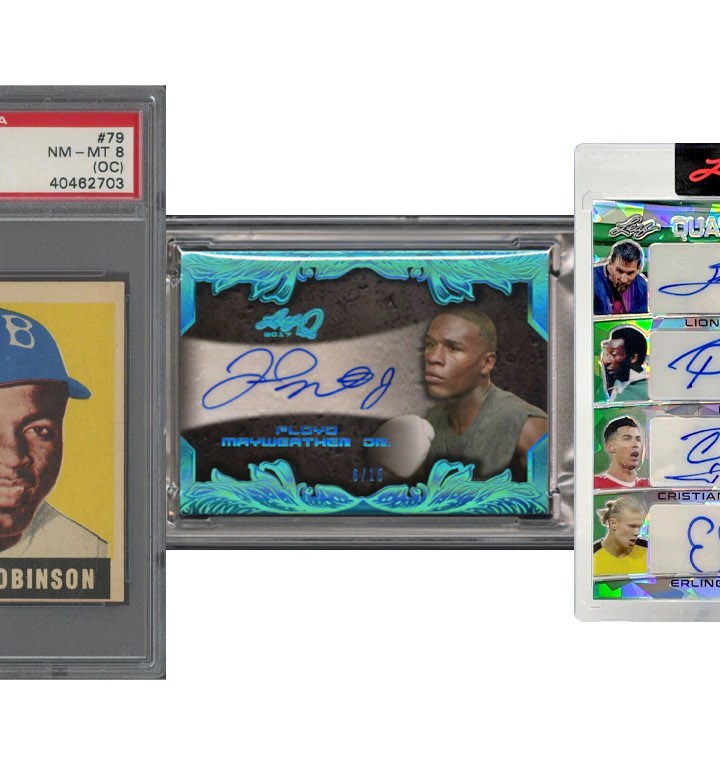 Leaf Trading Cards was founded in 2010 by owner Brian Gray. However, the brand has no affiliation with the Leaf cards of the 1940s and 1950s. While Leaf lacks many of the logos and licensing for professional sports, they are able to make many products that center on autographs.

The group produces football, basketball, hockey, baseball, MMA, and non-sport products that contain an abundance of autographs. This has proved to be an alternative for collectors who want a signature of their favorite player for an inexpensive price. 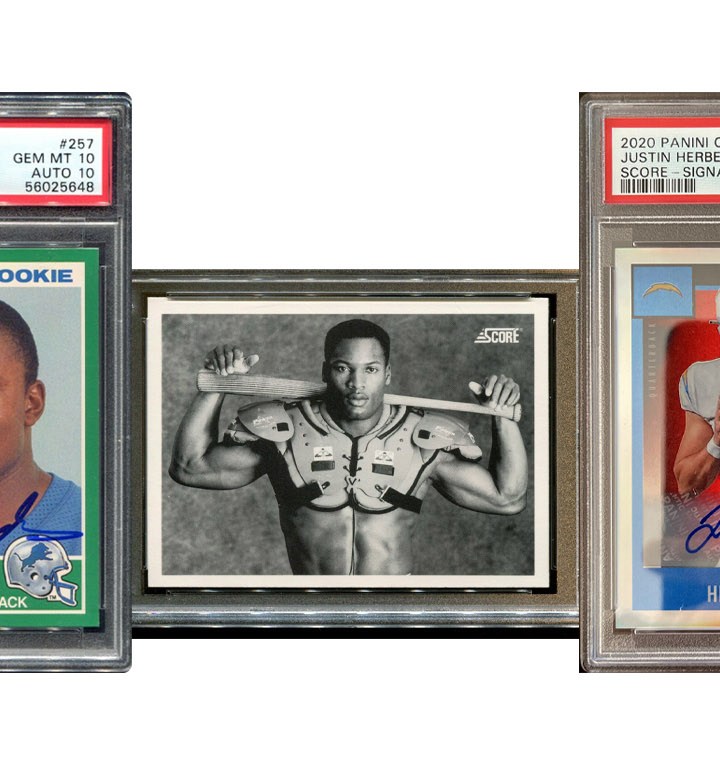 Score trading cards first burst onto the scene during the junk wax era of the late 1980s. Their products were praised for its bright bordering and extensive player biographics, which weren’t often seen in Topps, Fleer, or Donruss cards at the time.

The set was originally a subset of Pinnacle Brands, who were later purchased by Donruss Playoff. Today, the Score logo is still seen on some lower-end football and basketball products. 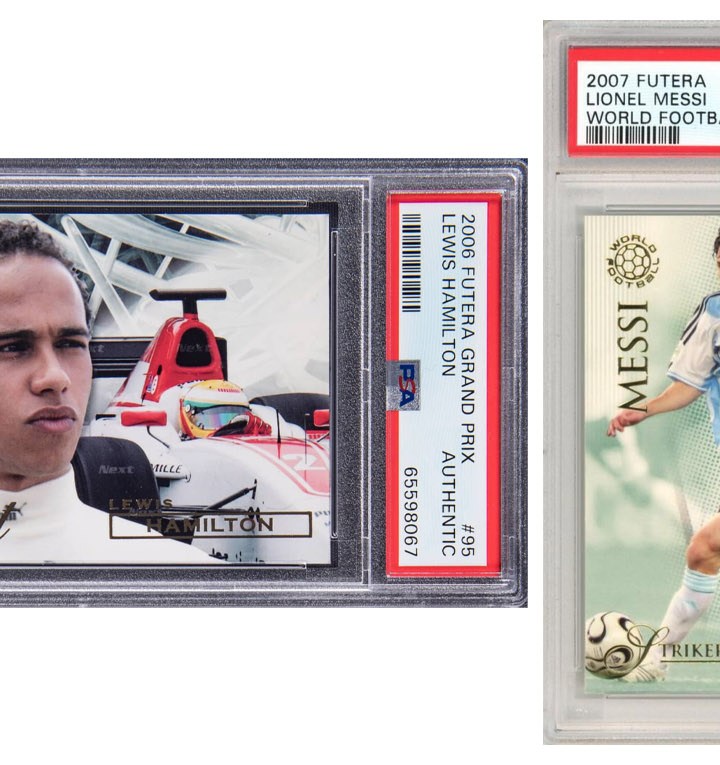 The Futera brand was established in 1989 and currently positions its markets in Europe, Asia, and the U.S. The company is primarily known for their soccer production, but they have some baseball releases as well.

They also have a foothold in the NFT world with their Futera United set. The brand allows collectors to purchase a physical copy of their own Futera avatar. This enables a new level of personalization in the hobby that we don’t see anywhere else. 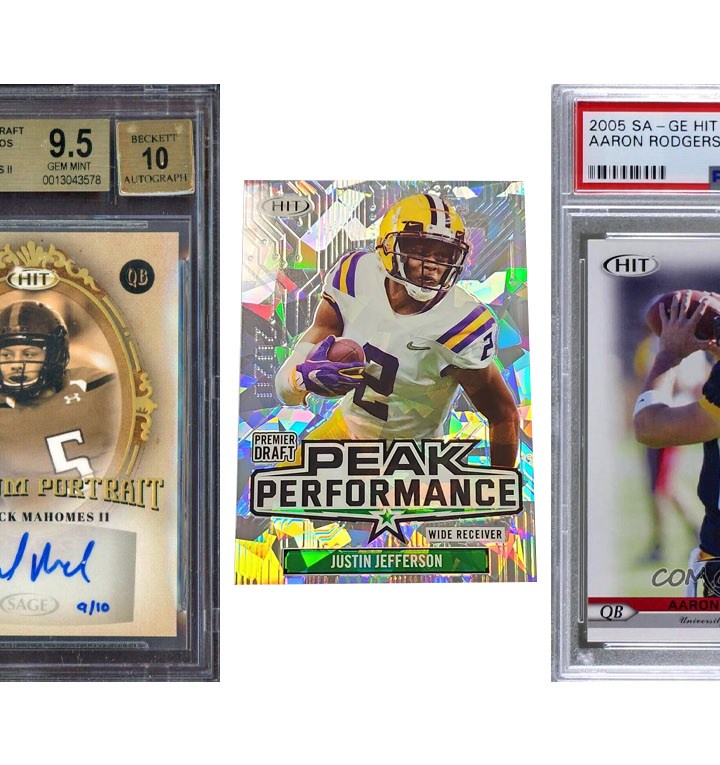 Finally, we have Sage Collectibles, a group largely focused on the collegiate sports market. While their cards do not have logos of NCAA teams, they are able to secure autographs of players before they blossom into professional stars.

Sage products are often sold in major retailers as blaster boxes, which are a cheaper alternative to pricier hobby boxes.

Which one of these trading card companies is your favorite? Did we miss one of the smaller ones that you enjoy? Shoot us a tweet @cardtalkpod on Twitter or Instagram and let us know!