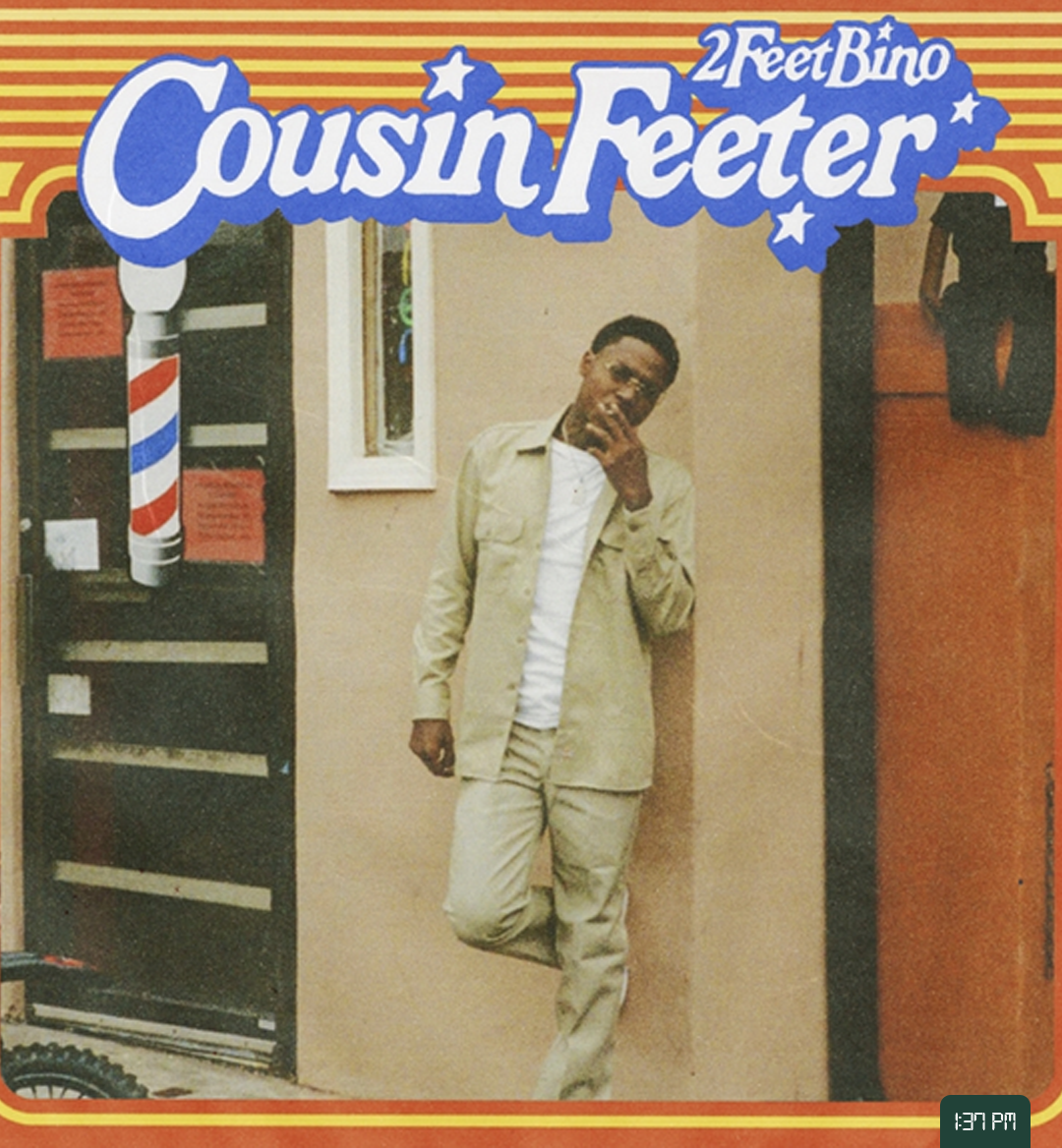 2FeetBino is a rapper, songwriter, and artist based in Atlanta, Georgia. Signed to Paradise East Records, the versatile artist is a frequent collaborator with Young Nudy. If you are not familiar with the buzzing artist, we previously did a profile on him last week, diving into his music.

On December 9, 2021, Bino released his latest album Cousin Feeter. The sixteen-track project contains Young Nudy, Seddy Hendrinx, Cristo4L, and 4l Quan features. The tracklist runs for around forty minutes and includes a lot of versatile flows from both Bino and his collaborators. Be sure to tune in below.

The album opens up with "Be The One," a song that features a melancholic piano and a soft backing vocal pad. Bino then dives into his self-realizations, talking about where he is in life, the people he surrounds himself with, and haters. This track is a model album opener for its introduction to the sound he is developing with his natural and informal flow. This is just one of the many attributes that make this project an easy-listen for a new listener.

The next track, "How I'm Comin," was initially released as a single back in September 2021. This track quickly became a fan favorite, gaining over two hundred thousand streams on Spotify before the album release. What makes this a standout song for Bino is the seamless transition between his verses and choruses. This can be heard explicitly at the end of the hook, when he spits, "​​Told her call me when you need me. We spinned his block and doubled back 'cause we got greedy. I can watch my own self on TV now. They got my **** on repeat now."

On "Just Because," we hear a more vulnerable vocal performance coming from him. The beat, produced by DatBoiGetro, Andyr, and 8goincrazy, contains sorrow-filled elements contained throughout, such as the melody and violin that makes spontaneous appearances throughout the track. In the song, he acknowledges his self-confidence in himself and his career. This is evident early in the song with the lyrics, "Yeah, yeah, let's get it. Customized fitted, don't need no co-sign 'cause I'm different."

The song "Show Me Love" shifts to an upbeat and energy-filled beat, matched with unique adlibs from Bino. This track is a perfect example of Bino's versatility as an artist. He crafts clever rhymes and a stable flow on the verses, then on the chorus offers distinct, catchy singing performance loaded with vibrato. This is a song you're going to want to tune into.

In "Settle," Bino is joined by Seddy Hendrinx, a fellow emerging artist from Florida. This song goes into the grind of never being content in life and constantly grinding, hence inspiring the song's title. Seddy and Bino's chemistry runs rampant in this track, as it is a perfectly executed collaboration. Bino delivers soulful, melodic bars, and Seddy contrasts that with raw and isolating vocals.

The next piece, "Naked," has Bino diving into a more sensual and lust-filled theme. The song runs a little under two minutes, but that only adds to the replay value. This song contains a highly catchy hook that will be stuck in your head only after one listen. Additionally, Bino tries out different flows throughout the track, with a loose, unsecured flow and his melodic flow found throughout the project so far.

Following, "Above The Rim" offers a refreshing and new sound that Bino is experimenting with. The track opens up with a plucked guitar melody, followed by a new asperous flow by Bino. What makes this delivery unique and contemporary is its ever-changing annunciations methods by which he crafts his lyrics. This is a common theme that is heard throughout the whole album.

Young Nudy hops in to appear on "Can't Contain" on the next piece. He opens up with a combative and fresh flow. This sets up Bino to shine, displaying nothing but pure rapping capabilities. Bino experiments with new flows and deliveries throughout the album, but his track is the crown-jewel to prove that he is a force to be reckoned with for years to come. It would be best if you tuned in.

He follows up with "Absolute," "No More," and "Never Seen," all songs that explore different themes that tie back to the overarching story of the album. In "Absolute," you can hear him rapping about his confidence, musical capacity, and staying authentic to himself. He backs this up with "No More," a song where he dives into what he did for an ex-lover, no longer doing it, creating the title. Furthermore, he delivers subliminal flexes in this song, acknowledging the fruits of his labor. Finally, in "Never Seen," he talks about he wishes he never changed for somebody else and what he's going to do when he makes his mark.

Following these songs comes "Sex, Money, Seafood," a song that was previously released as a single. The song gives off the energy of Bino bossing up as a person and is a must-listen. The song was initially released in October and had over one hundred thousand streams before the album was released. He also dropped a music video, which you can watch below.

Bino then closes up the album with "1G Freestyle" with Cristo4L, "Palm Trees," "Got Me Started," and "In Da Spot" featuring 4l Quan. Bino, along with the featured artists, continues to push their sounds out in new mediums. In conclusion, this album feels like a coming-of-age moment for Bino in his music career thus far. As we look to the future, I'm sure we can continue to expect diverse flows and storytelling in a new way that'll set him apart from the rest. The future is bright for 2FeetBino, to say the least, so be sure to keep an eye out for the emerging artist as he is poised for a big 2022.