The 12 Best Batman Suits of All Time 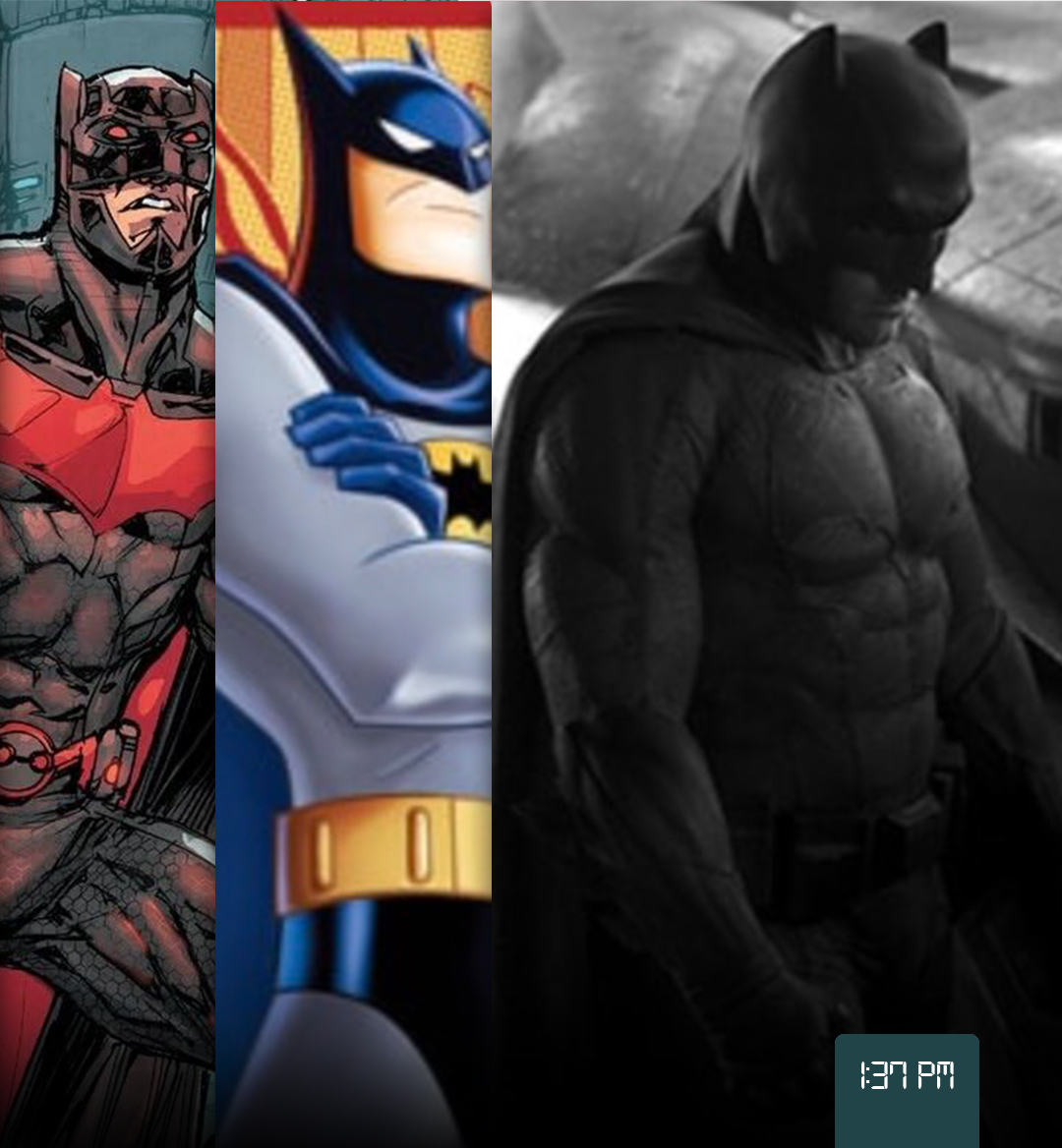 While one of the purposes of the batsuit is to blend into darkness, we've seen quite a few standouts in the years since Batman's first comic was released in 1939. The suit has seen many evolutions since its creation, first starting out as a simplistic costume to today's more bulked-up versions. In anticipation of the upcoming release of The Batman on March 4, we've rounded up 12 of the greatest Batman suits of all time, from niche editions of comics and classic films to Batman's forays into the video game world. 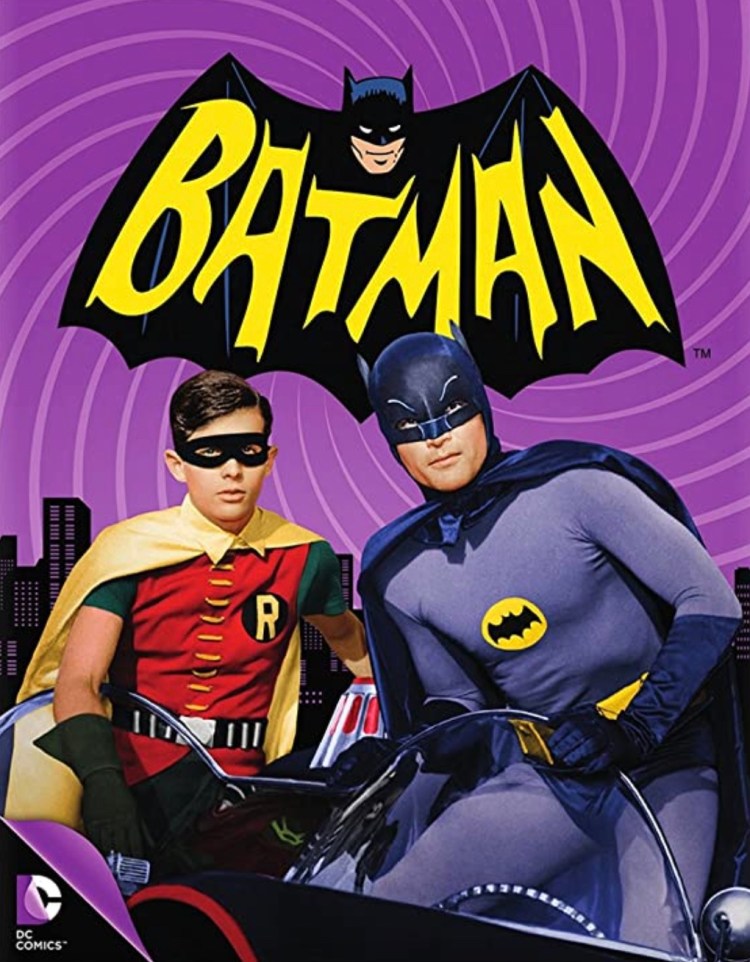 It's not a true list of the best Batman suits without Adam West's iconic get-up from the 1960s TV series, Batman. The color scheme on this suit is impeccable, as the classic dark grey perfectly complements the small bursts of yellow on the logo and belt. Today, the suit looks like something you'd pick out at Party City for a toddler on Halloween, but there's something to be said for the classics; it's Batman at his most Batman-y. 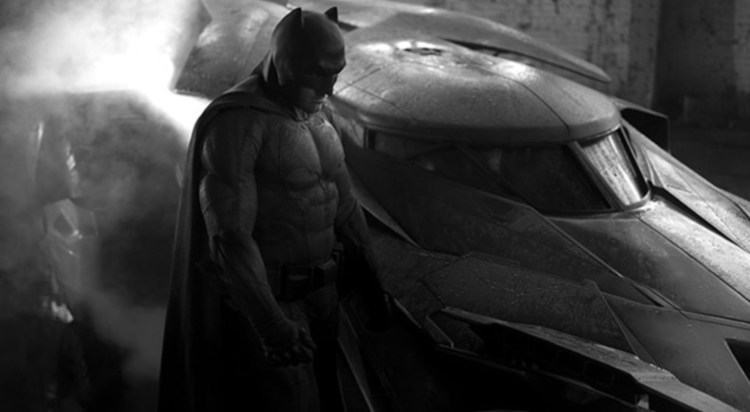 You can practically feel the fabric of this suit straight through the screen. While Batman v Superman: Dawn of Justice received some mixed feelings from fans, there's no question that Ben Affleck's suit in this film is outstanding. The texture is like no other we've seen before—a true modern re-make of the batsuit, using a much lighter fabric as opposed to the previous amped-up versions. The suit even features a wider Batman logo taking up much of the chest, which is vastly different from the more slender logos of the past. 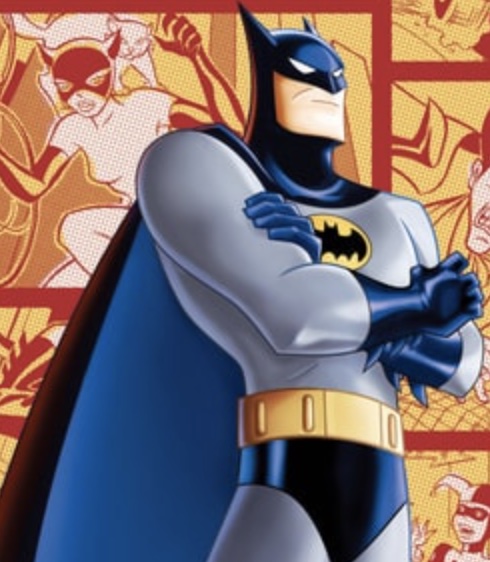 Playing off Adam West's suit, the batsuit in Batman: The Animated Series has a modern touch of sleek to it, yet still remaining true to its OG origins. A bit more bulked-up than West, this new Batman hit the scene in 1992 and introduced a completely new audience to the world. While West's suit strictly used black, grey, and yellow as its main colors, this version incorporated navy blue into the mix, setting a different tone for the new series. 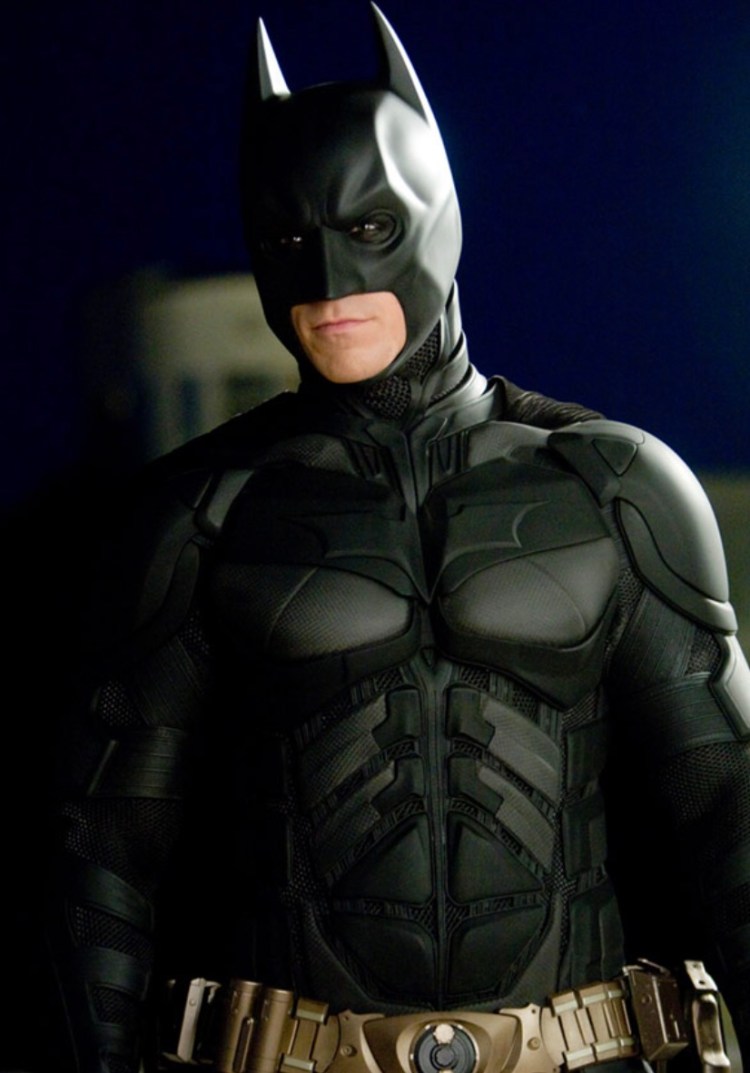 When Christian Bale stepped out as Batman for The Dark Knight, it instantly became an entirely new era for the superhero. While it's nowhere near simply due to his new suit, it certainly didn't hurt the darker image that Christopher Nolan was going for in his trilogy.

One of the most menacing batsuits we've seen, The Dark Knight's fit not only looks modernized and updated but also has a functionality to match. Bruce Wayne transforms into a hulking figure in this one, which is built up with extra armor and perfectly accented with detachable gauntlet fins. 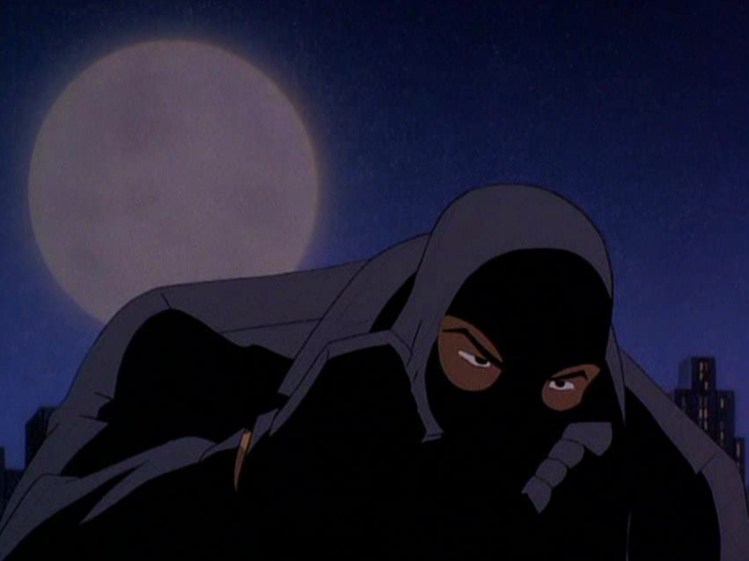 There's nothing I love more than a good ole DIY-superhero costume. At one point in Batman: Mask of the Phantasm, Batman throws on this sick get-up along with a ski mask, truly making him a vigilante on the run. In Batman Begins, we see Batman create his first batsuit in a similar fashion as he spray paints his suit black, throws on some dual belts, and puts on the final touch: a black ski mask. There's nothing better (or more gritty) than starting from scratch. 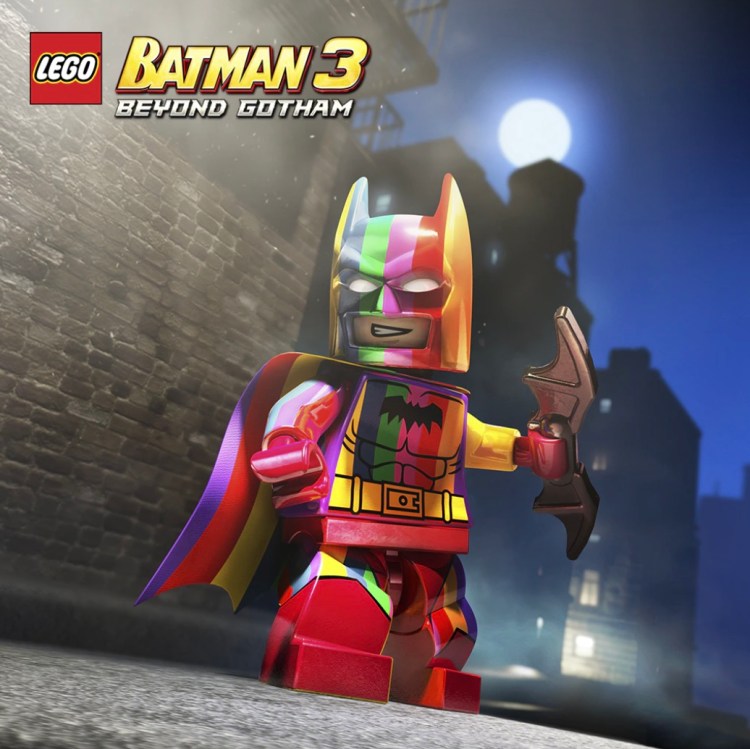 The LEGO Batman video game series has come out with a ton of different character suits over the years, but I'd have to argue that Rainbow Batman might just be the most chill of the bunch. It's something you'd never expect from Batman given that he's someone who prefers to blend into the background. So, he decided to go with the exact opposite: rainbow. Looking like a snow-cone fresh out of an ice cream truck, there's no denying that this suit is the most unique take on the classic figure. 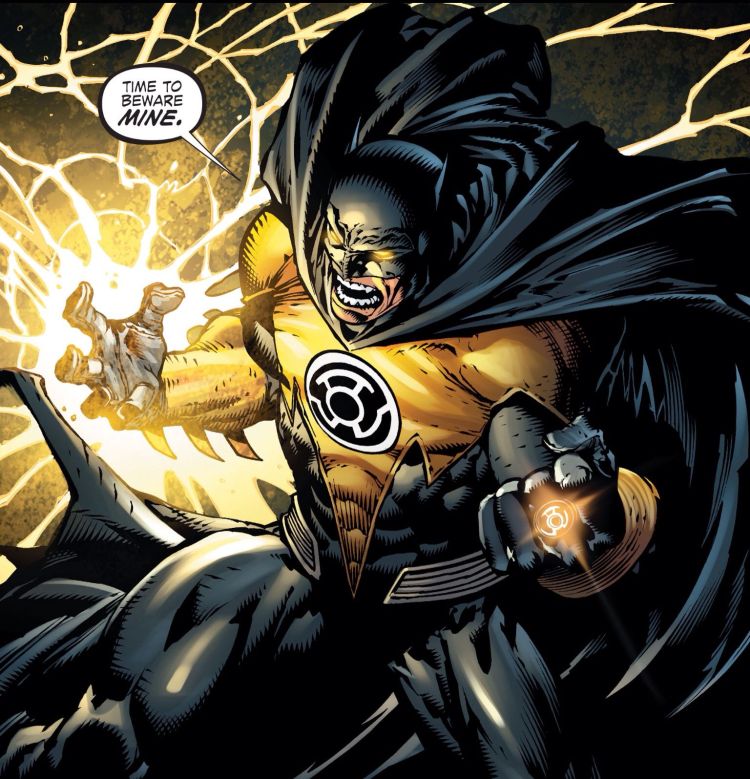 The Sinestro Crops relies on the power of fear to power its rings and wreak havoc across the galaxy. Batman knows a thing or two about instilling fear into the criminal base of Gotham City, which is why he was targeted by the Sinestro Corps in hopes of becoming one of its members. While he ended up being strong-willed enough to deny the ring's power hold over him, Batman looked pretty damn cool in his new Sinestro Corps fit for a split second. The yellow tinge seen on the top half of this costume matches up surprisingly well with the signature black fit of Batman's signature costume. 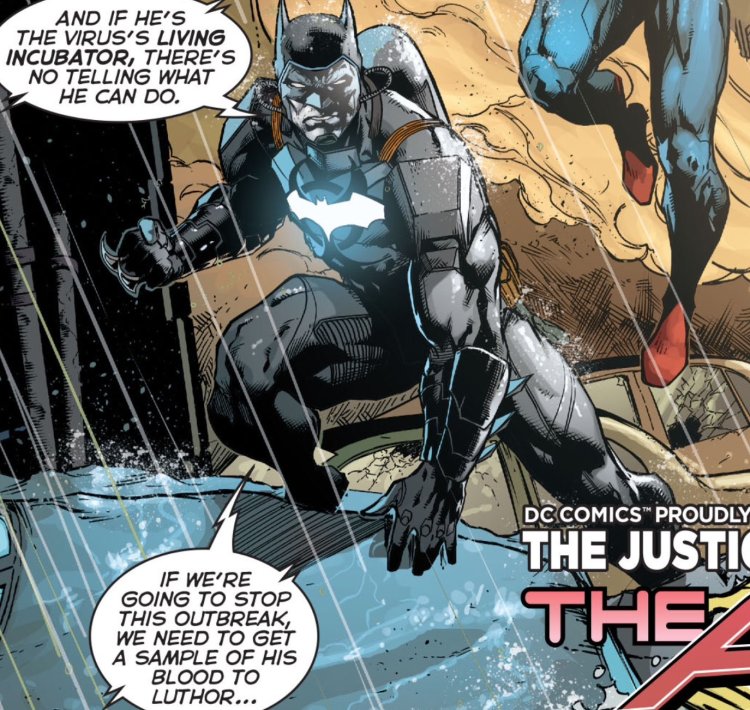 During Batman and Superman's mission to hunt down patient zero of the Amazo Virus, Batman decided to break this bad boy out to keep him safe from the viral infection himself—and it actually looks way better than it has any right to be. The glowing Batman logo on the chest area truly shines like a beacon of hope, the thick shoulder plates give the whole suit some extra bulk, and the addition of a face protector is a fine final addition to the whole ensemble. 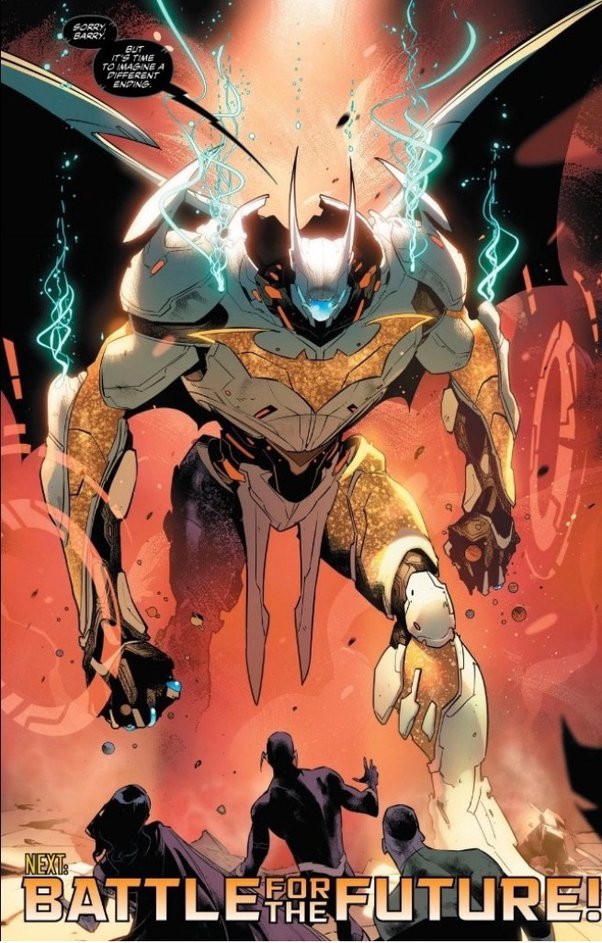 Batman's final Batsuit is recognized in the comics as the most powerful one of them all. On a cosmic level, its power is limitless as it's capable of allowing its user to peer into one's mind and also change it if they see fit. As it was built to be the Son Box itself, this suit comes off as an all-powerful outfit that showcases its strength through its overall appearance. This thing looks equal party divine and interplanetary, which gives it that "best of both worlds" sheen. 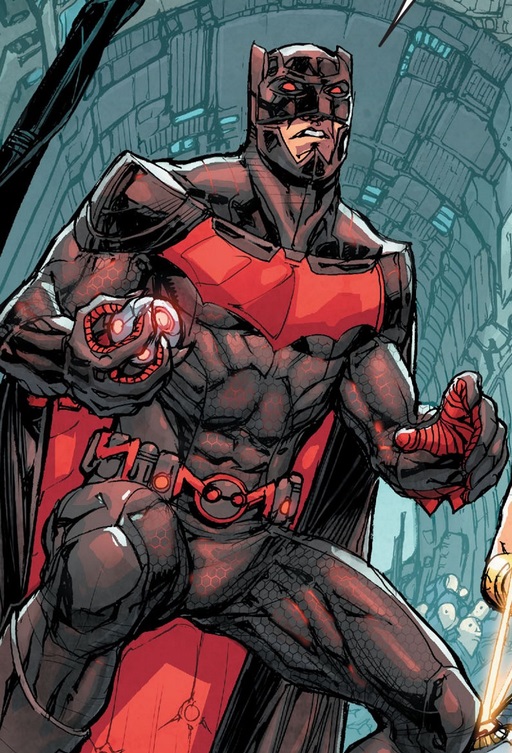 The Justice League 3000 comic series featured a clone of Batman fighting alongside a far-flung futuristic rendition of DC's iconic superhero contingent. This suit reflects the time period this version of Batman exists in, which gives it a very sleek cyberpunk design. The red and black color accents are extra clean, plus the redesigned mask nabs some extra brownie points for the overall design of this awesome-looking suit. 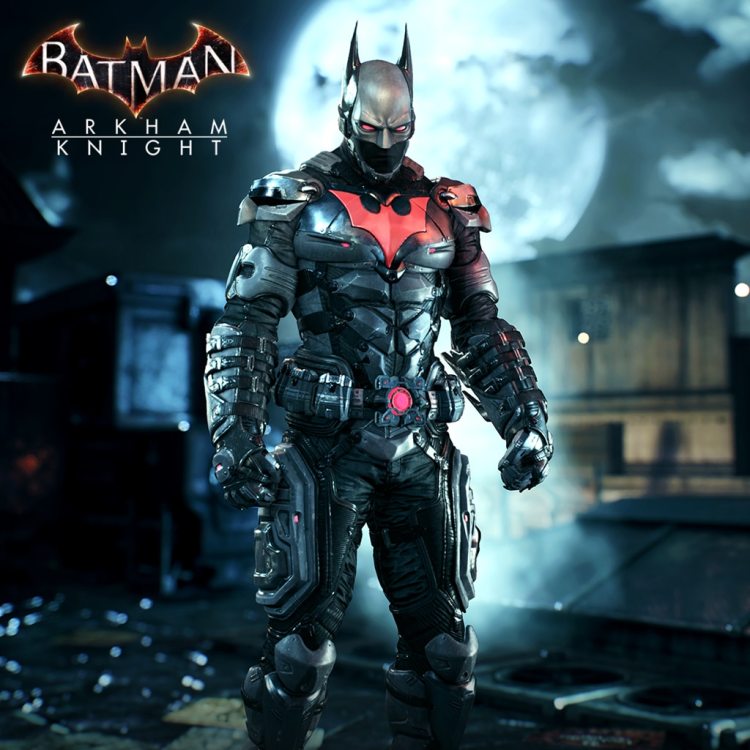 The original Batman Beyond cartoon will forever be goated. And to see Terry McGinnis' Batsuit pop up as an additional suit in Batman: Arkham Knight was such a cool tribute to one of the greatest superhero costumes of all time. Seeing Bruce Wayne don this suit fills it out even more and makes him look all the more intimidating. The addition of Batman's waist belt, shoulder pads, knee pads, and wrist gauntlets improves Batman Beyond's beloved suit design even more. 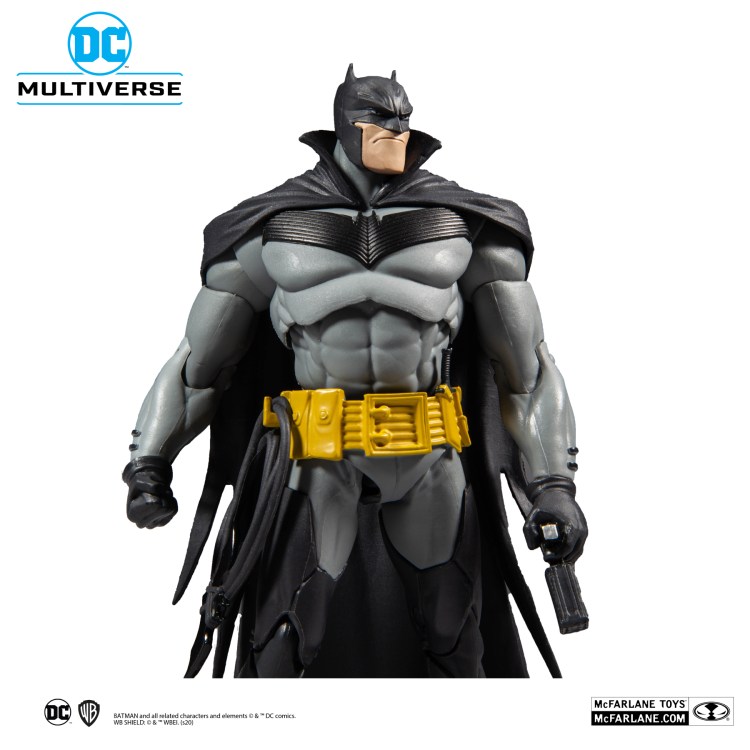 If you haven't done it already, make sure you seek out the DC Black Label storyline Batman: White Knight. Speaking of that standalone comic book, the Batsuit prominently featured in it comes off as a new and improved rendition of the Batsuit seen in The Dark Knight Returns. The stretched-out Batman motif on Bruce's chest exudes fear and the extra-long cape does a great job of increasing the fear factor attached to this suit tenfold. Batman gives off some badass Dracula vibes here with this one! The extra-large waist belt compliments this Batsuit so very, very well.