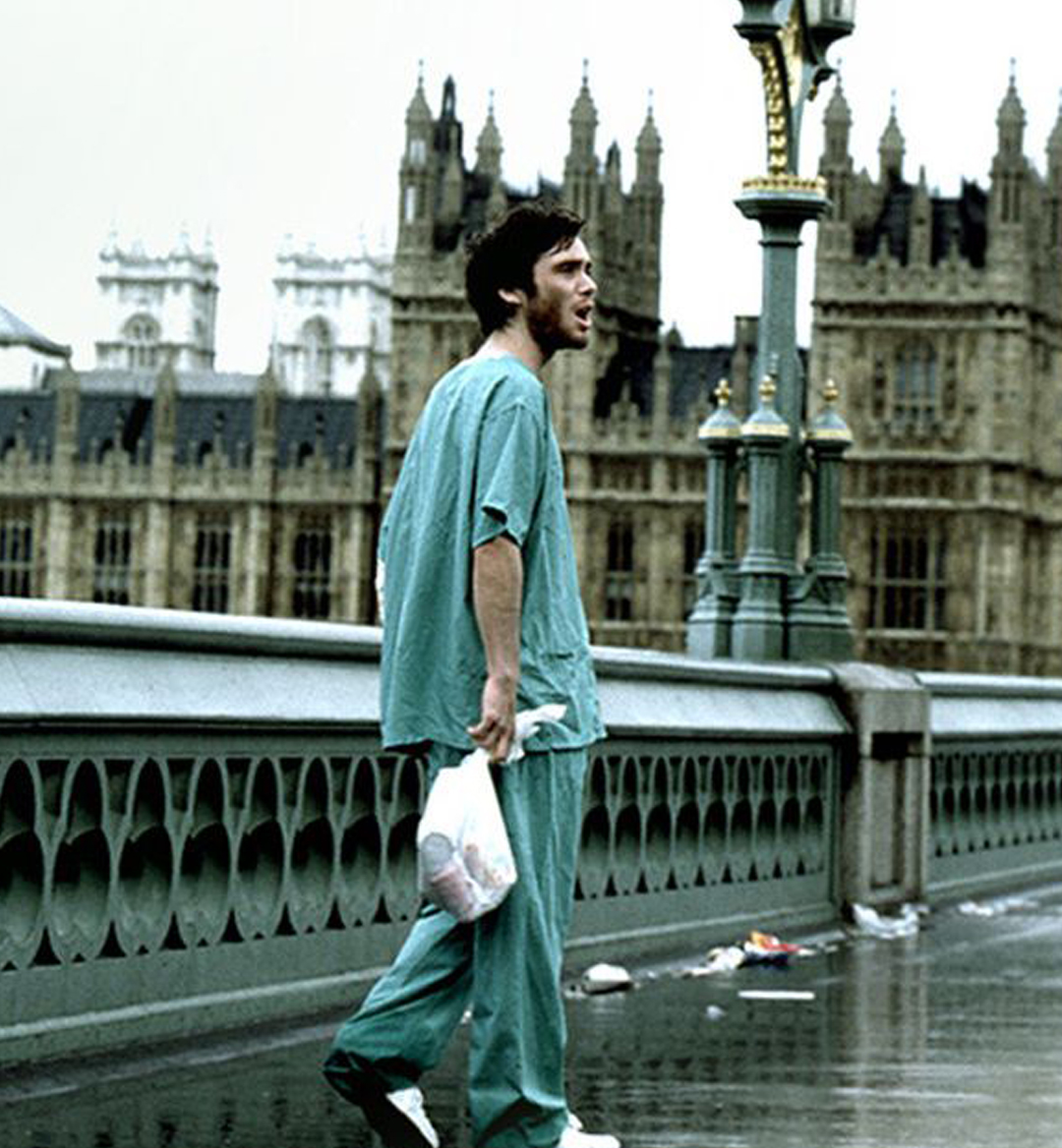 Although Netflix was at one point the dominating force in streaming for all genres, their horror selection as of late has been a bit lackluster. Services like Shudder have filled in some gaps with an overwhelming selection of indie and foreign films, while HBO Max has a substantial list of classics. Hulu’s selection is pretty varied: the streaming service has a collection of under-appreciated arthouse movies alongside Oscar-winning thrillers.

Just ‘cause it’s almost summer doesn’t mean the spirit of Halloween is waning for real horror junkies, so we’ve curated a list of the 20 best scary movies we could find on Hulu. From sci-fi dystopias to home invasion to postmodern thrillers, here are 20 films that’ll keep your blood curdled.

Although needlessly gritty revampings of previously campy genres have become so totally overdone, Danny Boyle’s reinvention of the zombie sub-genre in 28 Days Later is absolutely astounding. Shockingly artistic and with breathtaking cinematography, this film is one of the best zombie movies ever made. Don’t expect slapstick humor or silly misadventures a la Return of the Living Dead, the Oscar-winning director’s clever take on post-apocalyptic terror remains a dark standout in a genre otherwise beaten to death.

Danny Boyle did not return for the sequel to 28 Days Later, but director Juan Carlos Fresnadillo did a fantastic job of holding up the previous film’s aesthetic and tone. 28 Weeks Later is a post-post-apocalypse — it tells the story of what happens months after the world ends, and how humanity’s last survivors have since reshaped a rudimentary form of society. It’s equally as gritty and artistic as its predecessor, and about as violent. There are a few clever twists on the zombie mythos in here too.

At least one reviewer had described Blair Witch as “the worst of any 2016 release.” It’s definitely not — and figuring out why there’s such antipathy for this film is difficult. Perhaps critics are still angry they were duped by the avant-garde viral marketing of the original Blair Witch? In this reboot of the franchise which began in 1999, there are some pretty clever plot devices introduced to the Blair Witch cinematic universe: apparently, the entity commonly known as The Blair Witch can manipulate time! Either way, Blair Witch (2016) certainly doesn’t measure up to the pure terror of the first movie, but it’s a clever twist on the now-infamous urban legend nonetheless.

Bug flopped big at box offices upon its release in 2006, partially because it was advertised as a traditional horror movie instead of what it actually is: an artsy and melancholic thriller about severe mental illness. But even though Bug is lacking in obvious scares, it’s one of the most frightening — and emotionally devastating — movies ever made. Based on the play by Tracy Letts and directed by horror master William Friedkin (best known for helming the original Exorcist film in 1973), Bug tells the story of two depressed drug addicts whose utter loneliness draws them into mutual madness and shared delusions of government conspiracies. It’s oddly prescient in the age of QAnon, and the human story — about a mother’s loss and longing — is extremely touching. Excellent acting from Ashley Judd and Michael Shannon would make this an Oscar-worthy film — if the Oscars weren’t so averse to anything resembling horror. (Note: there’s another, entirely unrelated horror movie also titled Bug on Hulu that is absolutely not worth watching.)

A post-modern love letter to the horror genre, Cabin in the Woods is a Scream-adjacent deconstruction of obvious horror tropes. Like Scream, the movie has a pretty good sense of humor that doesn’t take away from the more serious scares. We won’t get too much into the plot — there are too many twists and turns to reveal — but it also means that re-watches are equally as rewarding as first-time viewings. Writer Drew Goddard, who was behind some of the best episodes of Buffy The Vampire Slayer, provides excellently witty dialogue throughout.

A24’s Midsommar was hailed as a highly original horror masterpiece shortly before the pandemic, but more casual moviegoers might not be aware there’s an entire sub-genre of harvest horror. An early example of this is Stephen King’s Children of the Corn, an occultic tale of rural terror. The movie itself is appropriately unnerving — lots of creepy children worshipping a mysterious agricultural deity — but the bombastic finale is pure silliness.

It’s hard to imagine straight-up monster movies could still be scary in the new millennium, but director Neil Marshall’s claustrophobic nightmare actually delivers. In The Descent, an all-female crew of cave explorers encounters a cannibalistic species of underground humanoids, as they’re picked off by the creatures one by one. It sounds pretty corny, but the amazing acting and use of darkness and shadow help this movie transcend its pretty simplistic concept. There’s also a shocking amount of emotional depth to the movie, too.

The Haunting (1999) is based on the iconic horror film of the same name from 1963, which itself is based on the 1959 novel, The Haunting of Hill House, by Shirley Jackson (confusingly, none of these are actually related to The House on Haunted Hill movies). This Y2K era movie has a star-studded cast and shockingly good special effects considering the year it was released. The acting is all absurdly over-the-top — as is the violence — but it’s a supernatural joyride filled with campy pleasures. Like a carnival ride in Hell.

Although the sequel to Hellraiser is pretty incomprehensible without knowledge of the first film (which, itself, is pretty incomprehensible without reading the Clive Barker novel on which both are based), the special effects and insane character design of the perverse world of the Cenobites is undeniably enthralling. In Hellraiser, demonic entities who pursue pleasure and pain to their absolute limits enter our dimension to find new victims. An extended metaphor for forbidden, queer desires, Hellraiser 2’s surreal and gruesome imagery is hard to forget.

Casual cinema-goers finally recognized the immense talent of director Boon Joon-ho when he won a much-deserved Oscar in 2020. Horror fans have been aware of him for a while, partially thanks to his beloved monster movie, The Host. Laden with social commentary about the hyper-competitiveness of post-war South Korean capitalism, this movie is a sympathetic story of survival, featuring much more three-dimensional characters than you normally see in Western cinema.

Director Paul Verhoeven is known for both ultra-violent social commentary in movies like Robocop and Starship Troopers — and for sleazy sensuality, as in Showgirls. Hollow Man was a particularly salacious and sexually nasty movie, especially for the year 2000. In it, rogue scientists discover a chemical that can turn people invisible. But when the lead researcher realizes he can’t return himself back to normal, he begins going insane. The special effects are impressive to this day, and the story’s damning statement on masculinity’s corruptibility is starkly pessimistic.

Little Joe is a slow-paced, psychological sci-fi/horror film about scientists who genetically modify a plant so that its scent cures depression — but everyone who smells the flower starts acting really strange. Are they being driven to propagate the plant through its olfactory mind control, or are the protagonists becoming increasingly paranoid? Think Little Shop of Horrors, but taken totally seriously. Ben Wishaw and Emily Beecham star as the lead researchers in this Jessica Hausner-directed slow burn.

Based on the graphic novel of the same name by Derf Backderf, this film adaptation explores the childhood and adolescence of the serial killer Jeffrey Dahmer. Backderf was, in real life, a classmate of Dahmer’s and had a unique insight into his lonely life. Although the film depicts no actual violence whatsoever, the build-up to Dahmer taking his first victim is intense — and quite emotionally complex. My Friend Dahmer was criticized for glamorizing serial killers, but perhaps the film is a test of our capacity for empathy more than anything else.

Often put in a pantheon of classic horror alongside Rosemary’s Baby and The Exorcist, The Omen is a Hitchcockian suspense movie about a creepy child who may or may not be the Antichrist. The devil is afoot as a diplomat and his wife try to solve some unexplained deaths in the area — and begin to fear their own child is to blame. It’s all for you, Damien!

In this extremely well made 2009, German/British, sci-fi/horror movie, humanity has built an interstellar ark to carry 60,000 people on a 123-year trip to colonize an inhabitable plane. Some time into the mission, flight crew members awaken from their hypersleep chambers, leaving them with partial amnesia, while possibly suffering from Pandorum — a space-related sickness that causes psychosis when under emotional duress. With seemingly no one else on board, and no memory of their mission, it quickly becomes clear that they’re not alone. While searching the massive ship, the space cadets encounter an alien race of hunters, as well as other crew members who’d thawed from their sleep too soon. But have they encountered a terrible future or are they all going totally insane?

Bong Joon-ho’s Parasite was so good that even the Academy had to overcome their statistically-proven racism to give it proper accolades. Although it’s not as conventionally scary as most of the films on this list, the movie’s chilling commentary on the cruelty of capitalism — and some actually stunningly violent twists in the film — make it far more impactful than your standard horror fare.

Although it’s probably unfair to compare Brandon Cronenberg to his father, David Cronenberg, the pair’s movies — at least so far — have a lot of thematic similarities. Exploring body horror, psychedelia, postmodernism, and the implications of technology on identity, Possessor tells the story of a near-future spy agency that can insert an agent’s consciousness into another person’s mind. It’s a deliriously deranged movie with a devastatingly original aesthetic.

Adrien Brody plays an unexpectedly buff action hero in this reboot of the classic sci-fi franchise which began in 1987. Although Predator is often remembered for its stylized 80’s aesthetic and iconically excessive performance from Arnold Schwarzenegger — this reimagining is deadly serious. The action scenes are well choreographed and the plot is pretty engaging considering the not-so-sophisticated subject matter.

Horror movies directed by women are rare gems, thanks to the misogyny of Hollywood — and they’re are usually considerably better than the mediocrity produced by most men. Celebrating horror from a female perspective, this collection of four short films is hyper-stylized and varying in subject matter and brutality. “The Box,” directed by Jovanka Vuckovic, is the most disturbing of the tetralogy and deals with trauma and anorexia — but Annie Clark (better known as Saint Vincent) also showcases a dark quirkiness with her entry, “The Birthday Party.”

It’s unclear what was happening in pop culture around 2010 such that home invasion horror had such a moment, but You’re Next is one of the standout entries in the sub-genre that became oddly popular at that time. The movie is deeply nihilistic — it’s never exactly revealed why the murderous masked individuals are so bloodthirsty — but the clever violence throughout is darkly humorous while still staying pretty scary. There’s a story of family dysfunction buried under a thick layer of blood.