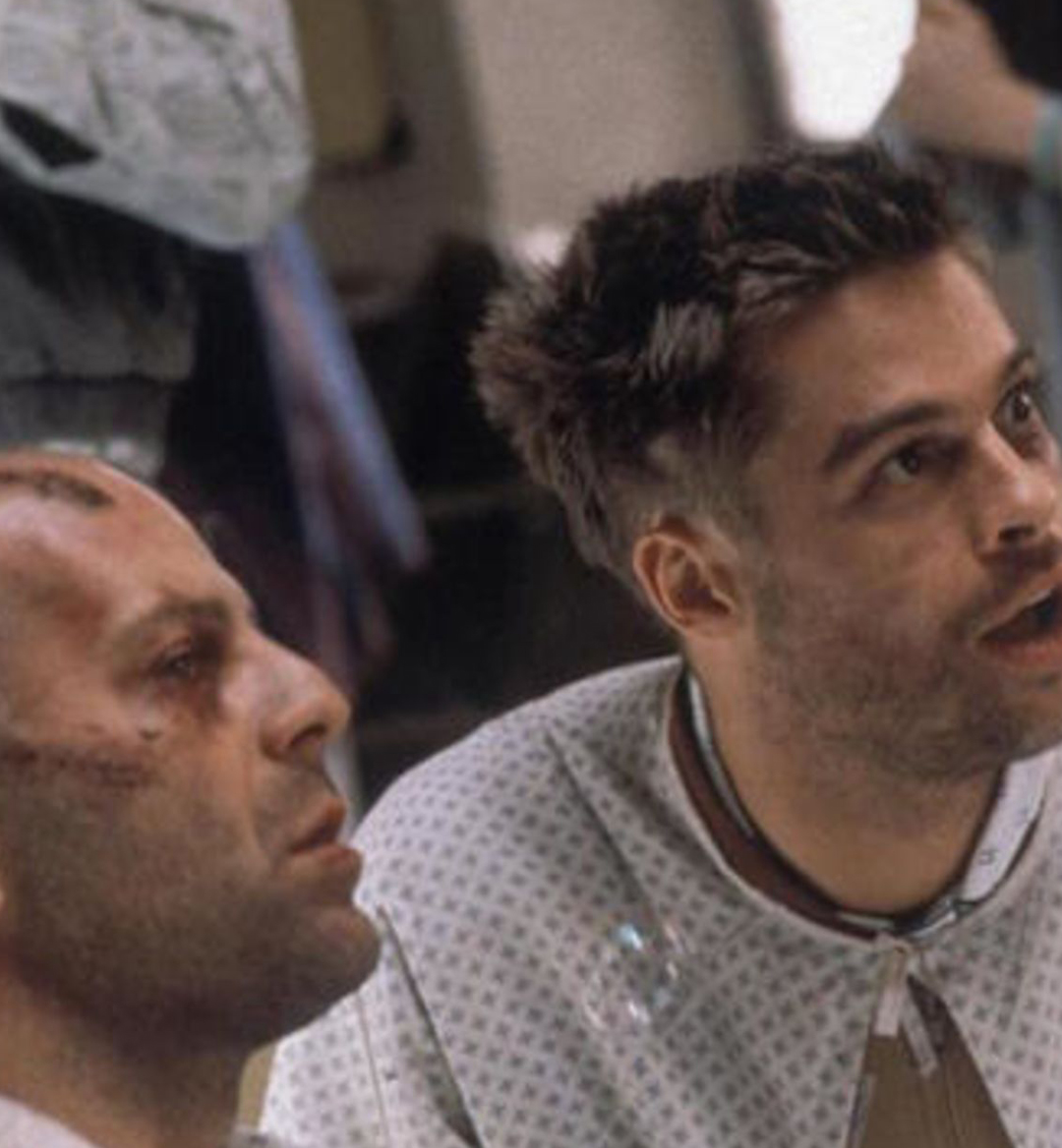 Whether you look towards sci-fi for space-opera escapism or incisive questions about identity, there’s an appropriately overwhelming amount of media currently available for streaming. Hulu’s selection in particular is impressively expansive. Ranging from anime classics to original spins on important literature to trashy reboots of beloved franchises, we’ve picked out the 16 best TV shows and movies we could find — all currently available to be beamed directly into your brain!

After the Earth becomes uninhabitable, an ark of survivors travelling to Mars is thrown off course, causing them to drift through space for eternity. A device used to calm the anxiety of the passengers begins malfunctioning, causing the ship’s passengers to hallucinate. This existential space drama’s vision of humanity is pretty ghastly, but its visual styling and shockingly dark ending are impressive, especially for a relatively under-the-radar release.

It’s a shame Possessor never got a proper theatrical release and thus flew under the radar in 2020, as it’s easily one of the best films released in that accursed year. In this hallucinatory, cyberpunk noir by Brandon Cronenberg — yes, he’s the son of legendary auteur David Cronenberg, and yes his filmmaking style is quite similar to his father’s — a shadowy agency invents a way to implant an undercover agent’s consciousness into a human vessel. But traversing various identities takes its toll on the agents, and some begin to lose their minds. Fleshy, dispassionate psychedelia abounds.

The third movie in the Tetsuo series, Bullet Man continues the nightmarish and absurdist non-narrative sequences of the previous films. In each movie, men’s sexual problems are metaphorized through complicated animation sequences in which tortured bodies become cyborg monstrosities without warning or explanation. Rife with psychoanalytic symbolism, these deeply strange movies have been shockingly influential on contemporary cinema and anime.

Netflix’s choice to reboot Cowboy Bebop is almost insulting considering the beloved anime series is actually perfect in every way. Why bother trying to improve on something with no flaws? This legendary 90’s anime uses a rousing jazz score to set the mood for various space-age, neo-noir adventures. The handsome but curmudgeonly Spike Spiegel leads a crew of misfit bounty hunters including a non-binary super hacker, a buxom femme fatale, and an adorable Welsh corgi on a series of ill-fated raids while slowly confronting his haunted past. Despite its seemingly shallow, action-oriented premise, the story is emotionally compelling and plays with both typical sci-fi themes about the ramifications of technology and more complicated questions about existential meaning and the ephemerality of identity and love.

From the production company that created Buffy the Vampire Slayer and Angel, Dollhouse is a precursor to the near-future sci-fi of Black Mirror. When a rogue scientist discovers a way to temporarily wipe peoples’ memories and replace them with modular personality traits, a nefarious entertainment company begins renting out living humans as dolls to be used as sex workers and assassins. Although the first few episodes are a standard monster of the week sci-fi, the story unravels quite quickly into a post-apocalyptic nightmare when the technology of this agency is used as a weapon. Eliza Dushku plays the protagonist and is ultimately quite overworked — she essentially has an entirely new personality every episode — but a talented supporting cast rounds out this shockingly intelligent cyberpunk hellscape.

When Margaret Atwood looked around at the growing Christian fundamentalism of the 1980s, she worried that the wild fanaticism of conservatism could result in widespread violence. She wrote The Handmaid’s Tale as a warning about the inherent misogyny of the American right — and frighteningly, many of her predictions came true. The first season of this Hulu original series sticks pretty close to the novel, but subsequent seasons veer in a different direction as the show moves through a handful of genres including torture porn and espionage thriller. It’s sci-fi in the sense that it takes place in some dark near-future, but don’t expect robots or space aliens.

From the makers of FLCL and Neon Genesis Evangelion, Gurren Lagann is another giant robot anime with stunning hand-drawn animation. The story plays out like Gundam on methamphetamines as the protagonist frees himself from an oppressive underground society to find himself involved in intergalactic warfare. What it lacks in intellectual sophistication it makes up for in heart and excess: the fight scenes are beyond over-the-top and the characters’ iconic outfits are often totally absurd.

Originally debuting in 1999, Futurama is a long-running sci-fi comedy cartoon series created by Simpsons mastermind Matt Groening. When a pizza delivery guy wakes up 1000 years in the future after accidentally cryogenically freezing himself, he discovers how different the world he once knew has become. Hijinks ensue when he joins a motley crew of misfit space travelers including an alcoholic robot and an aging mad scientist. Don’t expect too much incisive social criticism — the show is mostly politically anodyne — but a few episodes are absolutely heart-wrenching and the cast is totally lovable.

Guillermo Del Toro’s Academy award-winning sci-fi film is a postmodern pastiche of creature feature tropes. In Shape of Water, a cleaning lady at a shadowy government facility discovers a captured aquatic monster — and begins to fall in love. Del Toro uses monstrosity as a metaphor for otherness so as to critique the emotional impact of racial discrimination and segregation. The anachronistic art direction is magically creative and stunningly executed using old-school special effects and makeup design.

Hulu and the legendary horror studio Blumhouse (the production company behind contemporary horror classics like Get Out, Paranormal Activity, The Purge, Sinister, and many more) have partnered for an ongoing series of feature-length “installments” titled Into The Dark — basically, every episode is a stand-alone movie. Although the series is mostly more traditional horror, All That We Destroy You mixes in some elements: in it, a mother clones the same woman repeatedly to see if she can finally help her son conquer his murderous urges. All That We Destroy is one of a few sci-fi movies in that franchise along with I’m Just F*cking With You, Culture Shock, and a few others, but the other mini-movies in the franchise are worth investigating if you enjoy horror.

Linda Hamilton and Arnold Schwarzenegger reunite for this 2019 continuation of the Terminator franchise. It’s far from the best in the series, but the campy pleasures of this dynamic duo’s return are worth the price of entry. Schwarzenegger in particular hams it up — there’s a bizarre running gag that the T-800 has been reprogrammed to be an interior decorator? — and Linda Hamilton remains a butch icon. The special effects and action are all decadently cheesy and the plot is totally incoherent, but it’s a mindless, fun watch nonetheless.

Although Mobile Suit Gundam Wing was not the first series in the sprawling Gundam franchise to be translated into English, it was the first to be aired on television in the United States — thus garnering it immense popularity. Wing is technically the sixth installment in this idiosyncratic universe, but no knowledge of the previous characters or continuity is necessary. The characters and design in Wing are all multidimensional and the animation — although sometimes a little cheap looking — is often stunningly dynamic and graphically impressive. The story is also far more politically complex and adult than what you’d expect from a show that was ostensibly geared for children — in fact, the series is essentially an ongoing depiction of the psychological trauma caused by neverending war.

Terry Gilliam’s surrealist sci-fi masterpiece from 1995 is the main inspiration for this psychological, future thriller. Gilliam’s cult classic, which starred a young Bruce Willis, was a sort of steampunk-inflected nightmare world. The show is a bit less dreamlike than its source material but won multiple awards for cinematography nonetheless. Although its first season was not exactly warmly received, critics realized what a fully imagined universe it contained by the time they got to later episodes.

12 Monkeys is set in a post-viral, post-apocalypse: following the spread of a deadly disease that wipes out most of humanity, clandestine networks begin experimenting with time travel in the hopes of averting widespread destruction. It all sounds a bit nauseating — especially in the age of Corona! — but the multiple timelines of the show make it a fascinating and visually stimulating puzzle box of a series.

Katsuhiro Otomo’s legendary 4000+ page manga was adapted into an astoundingly epic film in 1988 — with the help of every animation studio that had existed in Japan at the time. The story, an extensive exploration of the unwieldiness of youth and the atrocities of atomic weaponry, is hard to digest on a first watch-through, but subsequent viewings make the brutally ultra-violent scenes more legible. The stunningly crisp HD version currently available on Hulu makes every hand-drawn frame look impossibly beautiful and often gorgeously grotesque.

Lars Von Trier, a pioneer in the cinema of evil, infamously suffered a nervous breakdown through the making of this movie. Upon its release, the director offered strange and controversial statements about artistry that caused the star of the film, Kirstin Dunst, to hesitantly disaffiliate from the auteur. It’s obvious this movie came from a place of immense suffering and sadness, but it’s truly a work of terrible beauty.

In Melancholia, a massive planet is hurtling towards the Earth and destined to destroy all life. With absolutely no hope for survival, humans totally give up and wonder if their lives are even worth grieving. An extended metaphor about the deep hopelessness caused by major depression, this masterpiece is far more emotionally complicated than your average big-budget sci-fi.