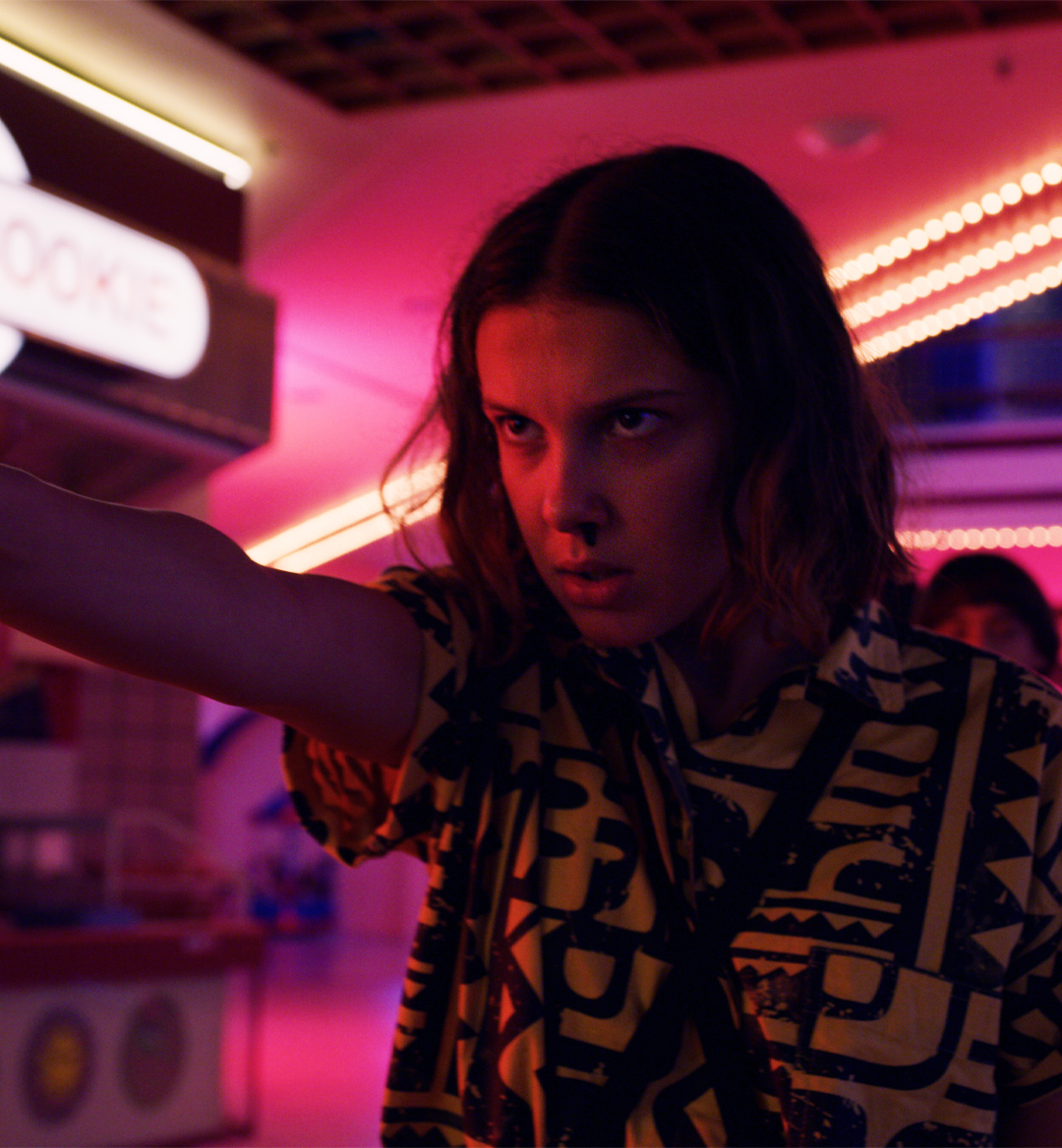 We’re currently surviving about 8 separate armageddons all at once — so there’s something oddly comforting about fiction in which humans have to deal with only one doomsday at a time. Netflix’s sci-fi section specifically has been an unlikely balm for the radioactive burns of this current dystopian moment, with selections ranging from cyberpunk adventures to philosophical meditations on the difference between man and machine. Unfortunately, there’s a whole lot of garbage on there, too, so you might be wondering: What are the best Sci-Fi series on Netflix?

Like a diligent robot farming for minerals on a distant planet, we’ve sorted out the valuable resources from the detritus and curated a playlist of Netflix’s greatest sci-fi series for your post-apocalyptic viewing pleasure. Check out our (superhero free!) curated list, below.

David Lynch’s psychotic TV show somehow charmed American audiences in the late ’80s with its bizarre combination of fantasy, sci-fi, neo-noir, and surrealist tropes. What starts as an investigation into a homecoming queen’s mysterious death unravels into an oneiric journey into other dimensions and unknown realities. It’s not exactly hard sci-fi, but the show’s influence is patently obvious throughout the genre in the ’90s and beyond.

Near-future dystopias are the name of the game in Black Mirror. For a moment, it was easy to dunk on the show’s premise for its facile predictions about the future of social media, but as the real world increasingly resembles the program’s darkest realities, there’s something nauseatingly prescient about even the earliest episodes. The violence and nihilism have gotten toned down a bit since the show’s inception (there are even a few romance episodes thrown into the mix these days) and the quality isn’t always even — but there are few series willing to give such dire warnings about our current digital hellscape. Each episode is a stand-alone story, so feel free to hop in wherever and skip around.

The speed with which Stranger Things became a ubiquitous cultural phenomenon would have been downright irritating if the show wasn’t precisely as charming as it’s die-hard fans profess it to be. Stranger Things is essentially a pastiche of 80’s sci-fi cliches executed with precision, deftness, and a whole lot of heart. It’s far from original—and the quality takes a dip after Season 1—but the excellent acting from the show’s adult and child stars elevate what could have been rather corny into something extraordinary. The series’ supporting protagonist, Eleven (Millie Bobby Brown) even became an unlikely streetwear icon.

Gainax, the studio behind the greatest Japanese cartoons of all time, brought forth this bizarre shonen series in 2007. Gurren Lagann follows the same beats as most giant robot anime — but turns the speed and intensity up to 11. It’s filled with a lovable cast of miscreants, fast-paced action sequences, endlessly endearing character design, and a truly hyped soundtrack of next-level J-rock. Considering how unapologetically stupid some episodes are, the final emotional moments are shockingly powerful. We bet you’ll be sobbing by the last episode!

What if eighty minds suddenly became one? The seemingly simple conceit for this series, helmed by the legendary Wachowskis, contains far more political and social commentary than one might immediately assume. A deep and meaningful exploration of identity, sexuality, gender, and embodiment is hidden not so subtly beneath the show’s action-oriented exterior. The series functions perfectly well as a post-cyberpunk thriller as it does as a contemplation on posthumanism.

Widely viewed as the greatest anime series of all time (and often hailed as a sci-fi masterpiece), NGE is a both a Freudian and existentialist meditation as much as it is a story about child soldiers fighting for the world’s survival. What starts as a typical anime quickly devolves into something far more strange and avant-garde. The series’ conclusion doesn’t make much sense as a result of major budget constraints at the time, so expect to follow up with the supplementary film, The End of Evangelion (also currently available on Netflix), which provides more clarity. (Note: due to ongoing licensing issues, the version currently streaming has been re-translated, re-dubbed, and re-scored from the original series that had at first aired on [adult swim] in the early aughts. The general consensus is that this new version is good enough, but not quite as impactful as the original).

GITS began as an obsessively detailed manga by Masamune Shirow in the late 1980s and spurned several films and TV series since — all of which have become essential texts in the cyberpunk canon. SAC_2045 is the latest offshoot of this story, and although it doesn’t quite pack the same punch as the first entries into the franchise, it’s still pretty amazing. The CGI rendering is certainly a step down from the gorgeously animated films but there’s something delightfully uncanny about watching the doll-like figures navigate the treachery of various virtual realities. In this iteration, cybernetic super-soldier Motoko Kusanagi attempts to thwart a post-human threat as multiple cyber brains suddenly and spontaneously go rogue.

Dark is a nexus of sci-fi concepts, a post-apocalyptic show, a time-travel show, a moody forest show (with advanced technology), a show rooted in German esoterica. It asks the viewer to watch like a detective from a timeline continuity bureau, taking copious notes to keep the story intelligible as characters create their own futures by their travel to the past. Often compared to Stranger Things.

How could one possibly summarize this truly strange series in just a few sentences? Near-death experiences, alternate realities, miraculous dance routines, extensive torture sequences, some kind of dimensional-bending clandestine seance: throw it all in a bizarrely emotional blender and you get The OA. There are definitely high art aspirations in the show’s somewhat avant-garde premise and presentation, but it’s a sci-fi story at heart. That being said: where the show begins is extremely far from where it ends up. Comparing it to any other film, book, or TV show is simply doing this shockingly original program a disservice. You really have to see it for yourself.

12. 'Godzilla (Planet of the Monsters, City on the Edge of Battle, The Planet Eater)'

We’re cheating a little here: this latest Godzilla anime is technically a trilogy of films but they function as a self-contained mini-series more than as stand-alone movies. Think of it as a total re-imagining of the Godzilla mythos: What if the original Kaiju was so powerful that humans had to flee the planet to escape his wrath? And what if they came back thousands of years later to find the monster still stomping around the globe? Does the human spirit really have enough resilience to endure such serious calamities and humiliations? Or would it be better to just … give up? It’s hard to imagine Godzilla as an existential parable, but it somehow works here.

Jaden Smith stars as the main character in this Afro-centric, postmodern parody of anime’s most obvious cliches. This ultra-fashionable show is unexpectedly hilarious and winkingly smart while still featuring absurd action sequences: in one scene, for example, Smith’s label-obsessed main character battles a possessed Damien Hirst sculpture during a hyper-futuristic art gala. How Academy Award-winning actress Susan Sarandon even got involved in this project is beyond us.

Would we even have contemporary sci-fi without The Twilight Zone? Seems unlikely. This expansive original program, the first series of which aired from 1956 to 1964, spanned the gamut of sci-fi subgenres — exploring dystopias, alternate timelines, near futures, alternate dimensions, the supernatural, psychological terror, and more. Each episode is a perfectly self-contained little nightmare. With powerful, expressionist aesthetics and ultra-sharp dialogue, every moment of this intelligent show is absolutely iconic.

The premise of Dragon Pilot sounds absolutely infantile, but the show has a surprising amount of emotional complexity for something so seemingly stupid. Air Defense rookie Hisone Amakasu is far from the best soldier, but when she pair-bonds with a mysterious dragon that can miraculously transform into a fighter jet, her whole world changes. Obviously inspired by Hayao Miyazaki’s anachronistic steampunk fantasies, Japanese studio Bones turns a goofy adventure story into a moving metaphor for growing up.

Gundam is the paradigmatic giant robot anime and the franchise is comparable to the Star Wars in how far-reaching and detailed the mythology really goes. MSG: UC follows a different continuity from most of the other series in the same universe but has plenty of outer space fight scenes to keep regular fans satisfied. The interplanetary politics are not always the most accessible, but the lushly gorgeous styling of the mechs are something to truly obsess over.

Attack on Titan is often hailed for sparking yet another resurgence in American interest in anime, with its ultra-dark plot about giant, skinless humanoid beings attacking major cities. It’s much more gritty and far less colorful than your standard anime fare, but the series is often hailed for its gut-wrenching storytelling and high-stakes action sequences.

Deep Space 9 is a bit of a departure from your standard Star Trek series: Instead of tracking the adventures of information-gathering spaceships, this iteration of the iconic franchise is about a space station located on the outskirts of a wormhole. Playing with the standard formula of the show allowed for creators to take interesting creative liberties, leading to plenty of unexpected moments.

The so-called “Ultra Series,” an expansive sci-fi franchise starring the eponymous tokusatsu cyber-soldier, Ultraman, and his various allies and nemeses, has garnered a massive cult following since its inception in 1966 — and Netflix’s adaptation is a perfect update of the original program’s thesis. Despite it’s very 2019 looking sheen, this new Ultraman is shockingly faithful to the original manga on which it’s based. Expect bonkers action and quintessentially Japanese transformation sequences.

There’s something impossibly lazy about “grimdark” updates of camp classics — but who could possibly resist Parker Posey starring as a duplicitous space vixen?! Not entirely humorless, this reboot of the 1960’s sci-fi classic (itself a reimagining of the 1812 novel The Swiss Family Robinson) is pretty clever, if not a bit expected.

Aesthetically reminiscent of the Final Fantasy video game franchise in its blending of steampunk fantasy and harder SF elements, Hunter X Hunter is remarkable in that zero out of its 148 episodes are filler. The more sci-fi stuff doesn’t really begin until the second season, but the fast-paced action of the first plot arc will surely keep even cynical audiences interested until then. Hunter X Hunter tracks the journey of Gon Freecss, a young boy from a fishing village, hoping to find his long lost father. During his misadventures, he befriends Killua Zoldyck, the heir of the world’s greatest family of assassins. The duo somehow becomes humanity’s last hope as they fight off various super-powered enemies — while also, of course, discovering the power of true friendship.

Ryan Murphy’s campy horror anthology series doesn’t too often veer into sci-fi territory, but the show’s 8th season took an expected turn with its strange and sometimes delightfully silly ventures into a post-doomsday scenario. The first episode depicts a nuclear holocaust, during which the world’s smartest teens have been whisked away to an underground bunker run by a suspiciously satanic matron. Then, it turns out, humanity’s last hope is a bunch of very trend-aware witches living in New Orleans. It’s hard to tell how much AHS: Apocalypse makes sense if you haven’t been keeping meticulous track of the program’s extensive lore, but there’s a good amount of easter eggs, fan service, and throwbacks for attentive viewers.

What Evangelion is for giant robots, Madoka is for magical girls. Although the show at first seems like a frivolous fantasy story about fanciful female fighters in frilly dresses, Madoka unravels into a deeply nihilistic allegory about the meaninglessness of human life: What if all the earth’s inhabitants were just livestock for another planet all along? Stunning, experimental animation and reality-bending plot twists are plentiful in this bizarre mini-series.