The 20 Best Tyler, The Creator Songs Of All Time 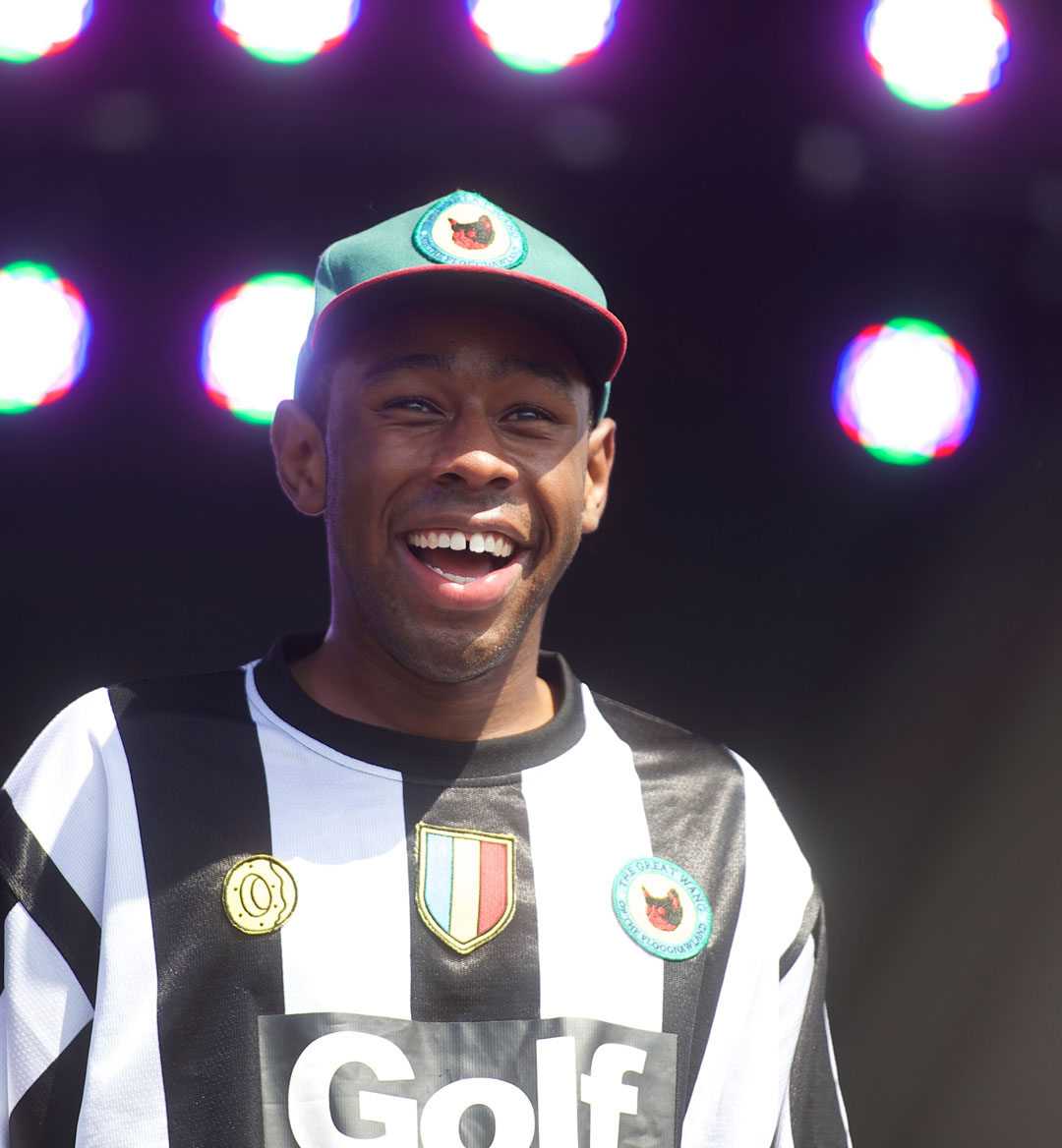 Earlier this month, a billboard appeared which read “CALL ME IF YOU GET LOST” and had a number written on it. Naturally, people called it, and it didn’t take long for people to realize that the voicemail that you could hear was Tyler, The Creator, and his mother talking. When fans tried uploading the voicemail to SoundCloud, they got a takedown notice, which is how we learned that it was actually a track called ‘MOMMA TALK.’ After a long silence, it felt like an album was near.

Not too long afterward, we got the first single ‘LUMBERJACK’ and then Tyler announced that CALL ME IF YOU GET LOST was actually the name of his album and that it would be out this Friday, June 25th. Of course, DJ Drama was on the single and is on ‘WUSYANAME’, so perhaps the new project is a Gangsta Grillz. While we look forward to the new body of work, in anticipation of it, let’s take a look back at the best Tyler, The Creator songs of all time.

This dual-track was basically our first impression of Flower Boy and in hindsight, it set the scene pretty well. Though they’re not credited, Frank Ocean, ScHoolboy Q, A$AP Rocky, Steve Lacy, and Anna Of The North all appear on the song. There’s an interesting dichotomy between the content of the lyrics and the feel of the production going on here which is classic Tyler.

In spite of the intentionally offensive content that Tyler was going for in those early years, his albums always still have some nuanced subject matter. ‘Answer’ is that track on Wolf. On it, the artist talks to three people who won’t answer his call, all for different reasons. The first is his father, who Tyler has only met a few times in his life. The second is his grandmother who passed away in 2012. The third is a girl who Tyler claims hates his guts.

‘Colossus’ is a story from Tyler which according to him, really happened. It’s named after the ride at Six Flags, which is where the scene is set. Tyler gets recognized by some fans and one, in particular, is especially excited to see him. The song has drawn comparisons to Eminem’s ‘Stan’, which Tyler insists he didn’t think of while making it.

‘Cowboy’ is a track on the first portion of Wolf that introduces us to Sam in the album’s narrative. You don’t need to know about that to enjoy the song though. There are a bunch of great quotes on this one. “Wolf Haley got more methods (meth heads) than Pinkman” is one. “Life ain’t got no light in it, darker than that closet that n*gga Frankie was hiding in” is another.

One of the standouts from IGOR, ‘EARFQUAKE’ has an impressive history. The song’s title comes not only from the chorus but from the fact that there was an actual earthquake while Tyler was writing it. It was also offered to Justin Bieber and Rihanna, who both declined it. Now, we couldn’t imagine anyone else on these vocals. 10 points to anyone who can recite Playboi Carti’s verse word for word without checking the lyrics first.

‘FUCKING YOUNG / PERFECT’ deserves a spot on this list based on its sound alone, but its content is also somewhere that not a lot of rappers would go. Tyler was 24-years-old when he released it and it’s a song about him falling in love with someone six years younger than him, which would be an 18-year-old. But it’s possible he wrote the song at 23, which gives the lyrics more weight. He sings “a six-year difference is a ten-year sentence”.

This smooth cut from Tyler’s Flower Boy album is considered by many to be Tyler’s coming-out song, although it couldn’t be argued that Tyler hadn’t tried long before it. Even taking Tyler’s personal investment into the song out of it, ‘Garden Shed’ is an incredible commentary on being in the closet. Estelle was a strange but perfect choice for a feature.

‘I THINK’ is a wonderful look into the mind of someone falling in love. The beat feels purposely chaotic to convey those emotions, but Tyler and Solange’s vocals feel like peace within the commotion. They go perfectly well together.

‘IFHY’ stands for ‘I Fucking Hate You’ and features one of Tyler’s biggest musical inspirations, Pharrell. It’s another common favorite amongst Tyler and Odd Future fans for its vibe and the musical journey it takes you on. The N.E.R.D. influence is present all over Tyler’s discography and especially so here.

In July of 2016, Tyler called this his favorite song he’s made (although that seems to have since been replaced by a song that comes later on this list) and it’s the favorite for an overwhelming portion of his fan base too. Of course, Okaga is not a real place in California and when he was asked about it around the time that CHERRY BOMB came out, Tyler said people would know in a few years. A few years later and we’re still guessing.

This is just one of the Tyler, The Creator, and A$AP Rocky collaborations on this list. The two were rumored to be working on a joint album called WANG$AP a few years ago but Tyler shot down dreams by saying it doesn’t exist. ‘Potato Salad’ is a preview into that and we love it. Some of the gaming wordplay is on the nose but welcome anyway. Honestly, a freestyle over Monica’s ‘Knock Knock’ could be in anyone’s top 20.

You haven’t truly experienced this song completely if you’ve never seen Tyler, Domo, and Earl’s performance of it on Late Night With David Letterman a few years ago. At a time when Odd Future’s brashness was still at a height and it still felt like they said controversial things for the sake of it, Tyler’s verse here pierces through everything with some refreshing honesty and consciousness. It’s as much of a statement as any Hip-Hop verse can be.

Though he called ‘OKAGA, CA’ his favorite song on Twitter in 2016, in 2017, Tyler called ‘See You Again’ his favorite. It was originally written for Zayn Malik, who missed two different studio sessions, so Tyler ended up keeping the song for himself. It’s a quintessential love song about a dream-like partner who Tyler only sees when his eyes are closed.

Listening back to Tyler rapping as a hungry 17-year-old is insane. ‘Seven’ is one of the standouts from his debut album Bastard and still holds up to this day.

To this day, ‘She’ remains one of the signature songs in Tyler’s discography. It’s a cult classic. Frank Ocean plays a girl’s lover and Tyler is her obsessed stalker. Tyler’s gritty voice and edgy lyrics contrast beautifully with Frank Ocean’s silky chorus. A few days ago, Tyler released ‘WUSYANAME’ and had fans wondering if it’s part of a trilogy that starts with this song.

On one of the covers for Wolf, you’ll see Tyler on a bike. That bike is called Slater, and this song is named after it. The song’s themes are broader than that though, and act more like a stream of consciousness for Tyler. He covers being on Kanye West’s private jet listening to ‘Cowboy’ (which appears earlier on this list), not needing to be high to come up with creative music and his own clothing.

It wouldn’t be right if SMUCKERS didn’t make this list. The song features Rap titans Kanye West and Lil Wayne, but Tyler holds his own with his charisma and wit. There’s no individual show-stealing here, but one of the many highlights of the song is Wayne and Tyler’s back and forth in the second half. Sharp punchlines over vintage production, what more could you ask for?

I remember the first time I heard this track like it was yesterday. I couldn’t have been older than 15, and the idea of someone deepening their voice and rapping from the perspective of Dracula was insane to me. The lyrics go out of their way to be ignorant, and it fits so well here over the loud production.

54 seconds. That’s how long it takes for us to hear any vocals on this song. Everything before that is a suspenseful intro that works so well because the beat drop is stupid. It’s songs like these that have us hoping that Tyler goes back to doing gritty Hip-Hop again. ‘LUMBERJACK’ is right in that lane too.

Most people’s first impression of Odd Future in general, Yonkers was an oddly perfect introduction to the world of Tyler, The Creator. The beat was somewhat haunting and the lyrics matched. While people loved the instrumental, we later found out that it was made as a mockery of New York beats, hence the name. That this song was Tyler’s breakout despite its controversial lyrics says everything it needs to about what we’ve experienced since 2009. Really, we shouldn’t be surprised.