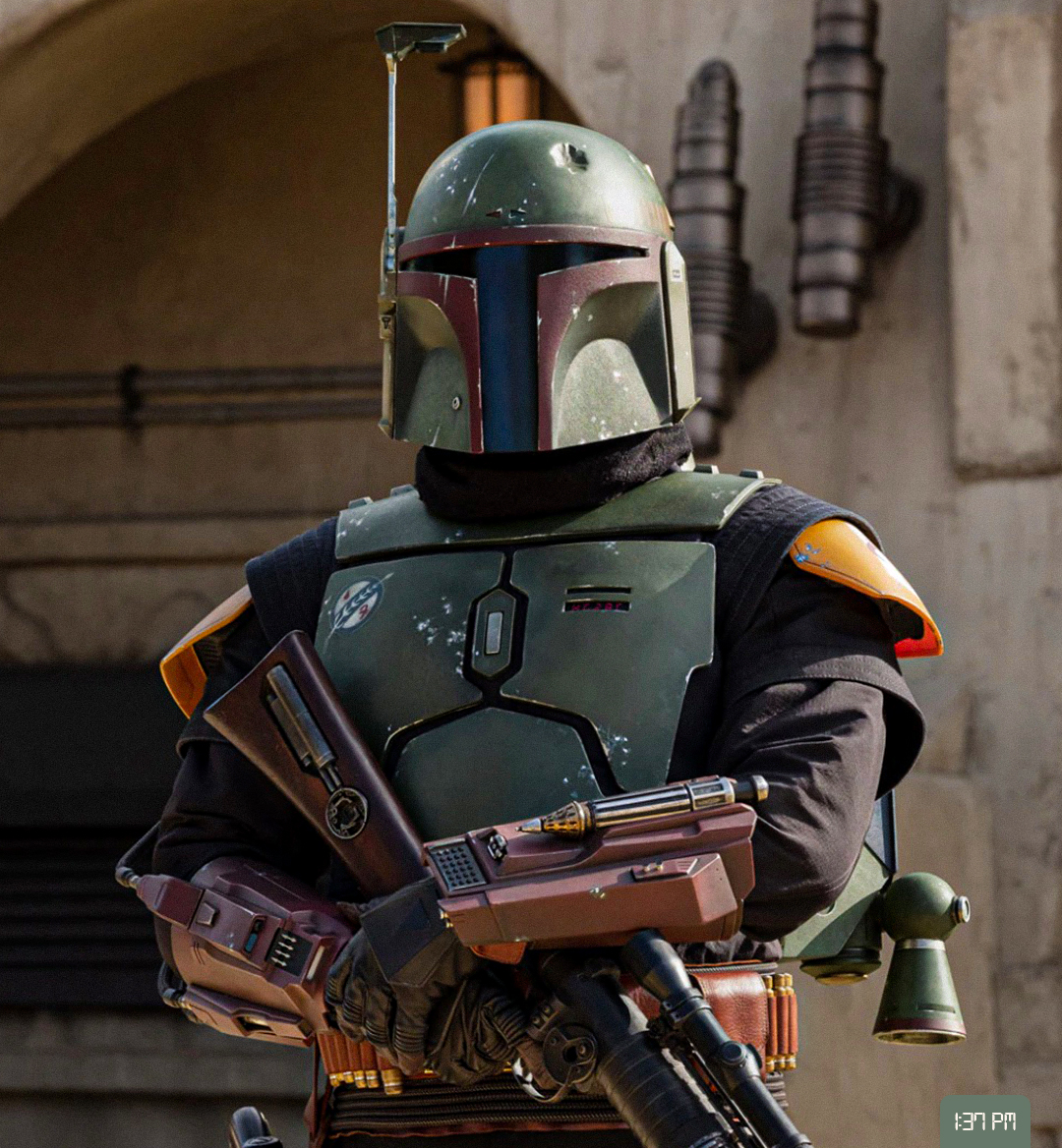 For another 38-minute episode (sigh), this one sure packed a ton of storylines in it, as 'The Streets of Mos Espa' walks us through the more gritty parts of the city.

At Jabba's (Boba Fett's) palace, the 8D8 Droid is standing in front of a projected map, giving Fett and Fennec Shand some history regarding the areas that were previously under the protection of Jabba and Bib Fortuna. He notes that Fortuna had Mos Espa divvied up into three sections by three families: the city center was taken by the Trandoshans, the Aqualish had the worker's district, and the Klatooinians controlled the upper sprawl and starport. Given this, 8D8 makes it known that the people of Mos Espa are waiting to see how Fett will lead the area.

Fett also reflects on their meeting with Mayor Mok Shaiz from the previous episode, where he denies sending the assassins to kill him. With this, Fett now believes that the Hutt Twins were behind the attack.

Interrupting this meeting, a local water monger and shop owner, Lortha Peel, comes by for an unscheduled visit, letting Fett know that a gang of local teenagers (who are half-human, half-robot) stole some of his water inventory from him. He begs Fett to get rid of them, and finally, he agrees to look into things. 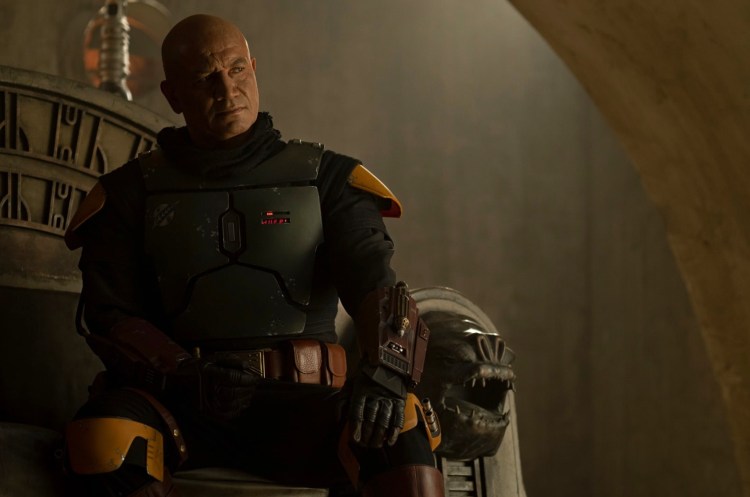 At night, Fett, Shand, and the Gamorrean Guards head into Mos Espa to track down the teens. Outside of the Peel's shop, he finds the group of grungy kids hanging out and decides to confront them. Expecting them to lie about their stealing, one of the leaders of the crew, Drash (Sophia Thatcher), openly admits to stealing the water. She explains that Peel is charging an exorbitant amount for water, which Fett is surprised by.

After Drash tells him that there's no work in the area to make the money to actually pay for the water, Fett suggests that she and her crew come work for him, which they agree to. Overhearing this, Peel comes rushing out of his shop and is outraged by it. Fett calls him out for charging too much for water and reimburses him for the gang's stealing by paying him a more acceptable amount: 500 credits instead of 1300. After that, the gang follows Fett back to the palace on multicolored sand scooters that resemble Vespas. Or, if you're a fan of the older Nickelodeon show, Zoey101, they basically look like the Jet-X.

In his medical pod, Fett has a quick flashback back at Kamino, watching his father fly away on Slave-1. In a more recent flashback, Fett is once again back with the Tusken Raiders, where he heads out on a Bantha to go to Mos Eisley and look for the Pykes. In the background, we get a quick glimpse into The Mandalorian as Peli Motto (Amy Sedaris) walks by in the background with a few of her robots.

Fett meets with Pyke Syndicate, where they talk about the protection arrangements in the Outer Rim. He's expecting to receive payments from the Pyke, though he refuses to pay Fett as they're already paying another party for protection: the Kintan Striders (the speeder bike gang). As the Pyke won't budge, Fett tells him that he won't be hearing from the striders anymore.

Upon his return, a billowing line of smoke clouds fill the air above the Tusken Raider camp, and upon further investigation, it turns out that the entire camp was burned down by the Kintan Striders. Their infamous symbol was painted onto one of the tents, and although Fett thought that he got his message across to them in last week's episode, they decided to take revenge on him for his actions. With this, Fett departs the camp, though he's brought back to the present day abruptly, as Black Krrsantan unloads him from his medical pod and throws him across the room.

The two fight in the medical pod room, with Fett making unsuccessful efforts to take the Wookiee down, as he's basically unstoppable. The gang of teens come running into the room to assist him and are mostly unsuccessful, even though there are so many of them. However, they're able to lead the Wookiee to the main room in the palace, getting him to stand over the trap door. At this point, Shand unlocks the trap door, though Black Krrsantan is able to hold on with one hand. She takes out her small knife and throws it at his hand, which finally traps him downstairs.

With that fight concluded, the twin Hutts show up to apologize to Fett with a massive gift (that they forgot to wrap, might I add): a "baby" rancor, fit with a trainer, portrayed by Danny Trejo. The Hutts also reveal that the territory they thought was for them was actually promised to a different Syndicate by Mayor Mok Shaiz. With that, the Twins have decided to go back to Hutta (Nal Hutta), their planet, instead of vying for the territory on Tatooine.

The Gamorrean Guards bring out Black Krrsantan, who is handcuffed, and Fett offers him back to the Hutts if they renounce their claims to Jabba the Hutt's land. They don't care about what happens to the Wookiee, so Fett simply releases him back onto Tatooine.

The rancor is brought to the lower level of the palace; its eyes are masked, as the first person it sees will become its leader. Trejo's character finally removes its mask and the rancor sees Fett, which he quickly becomes attached to.

Fett, Shand, and the teenage gang head over to have another impromptu meeting with the Mayor, and the Mayor's Twi'lek majordomo heads back to fetch him. However, he locks the door behind him; upon noticing this, Fett and Shand are able to break their way into the back room, though they find it completely empty.

Having to act quickly to catch the majordomo, the gang of teenagers take off on their sand scooters and begin to chase after him, who has taken off in a land speeder. They follow him through the cramped and crowded streets of Mos Espa constantly dodging droids, markets, and falling crates. It's not a super-high-speed chase, as one can only go so fast through such small streets, though I feel like they could've been going a little faster just for the sake of action.

The gang is finally able to corner the majordomo after he crashes his landspeeder into a fruit market, filling his vehicle with exotic fruits. Fett catches up to them with his jetpack, landing right beside the landspeeder, and finally asks where the Mayor is. Apparently, he decided to take off with the Pykes.

Elsewhere in Mos Espa, dozens of Pykes arrive on a starliner. Shand believes that this is only the first wave of them and that there are more coming; a clear sign that they want to go to war.

Top 30 Most Powerful Pokemon of All-Time