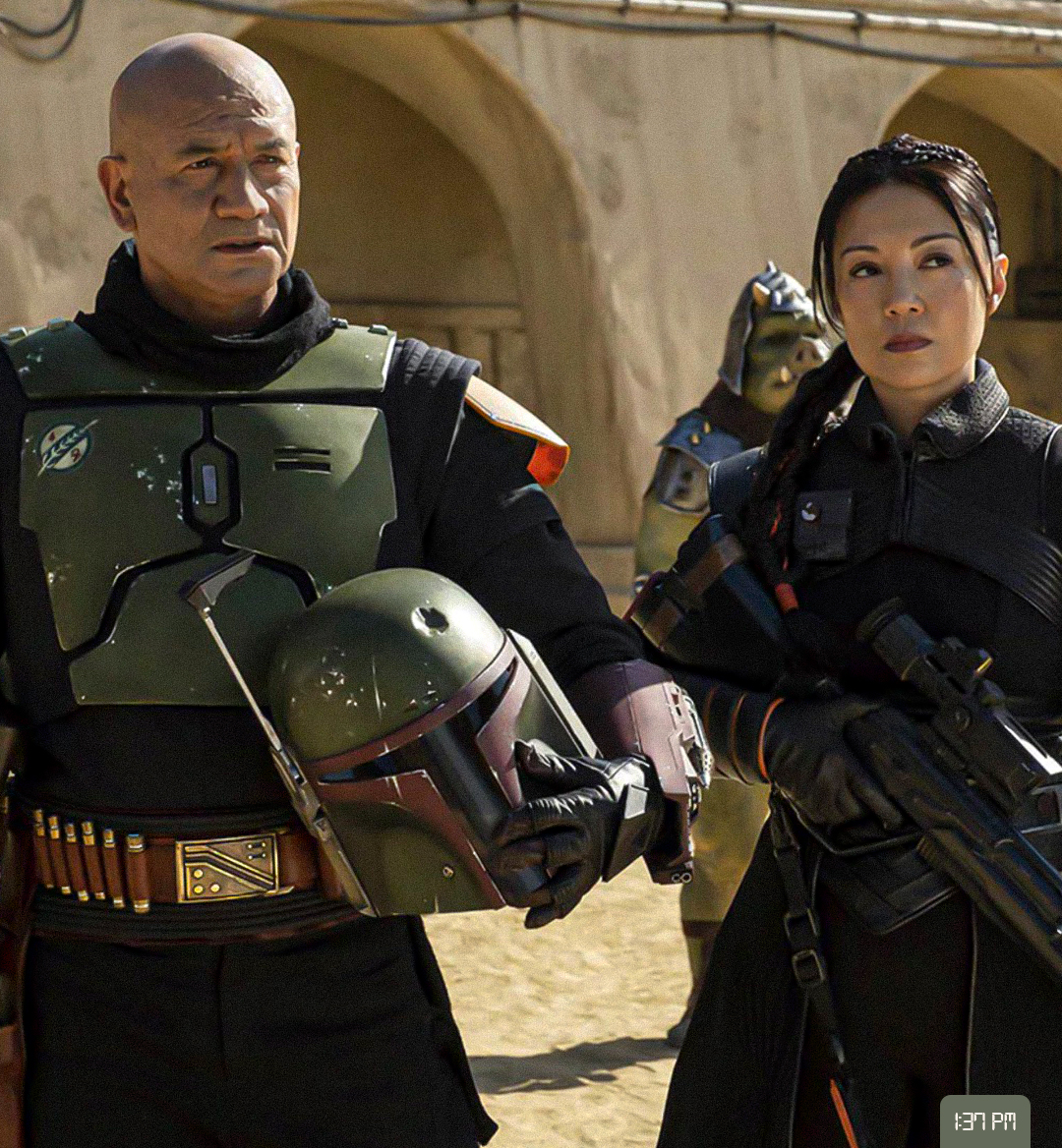 Ah, the last of the flashbacks.

We begin this episode once again in Boba Fett's bacta tank, where he's having another flashback that picks up right where we left off during his last one. On his bantha traveling from the scene of the Tusken Raiders' destroyed camp, Fett locates Jabba's (Fortuna's) Palace and takes account of the situation from afar, realizing that some of Fortuna's guards are patrolling the grounds.

As it's starting to get late, Fett calls it a day and starts up a campfire that night. He enjoys some food with his bantha but is taken aback when he hears a few explosions popping off nearby. Traveling a bit to see what the fuss was about, he finds Fennec Shand lying on the ground, nearly dead.

He straps her onto his bantha and they head off to the outskirts of Mos Eisley, where Fett finds a mod-parlor shop (which is responsible for creating the human-droid modifications like that of the teen gang from the last episode) to save her life. Running things much like a modern-day tattoo parlor, the owner of the shop finally agrees to work on Shand after Fett hands the artist a bag of coins.

Waking up at the campfire later that night, Shand glances down and sees her droid-abdomen for the first time and Fett explains what happened. He reveals that he knows who she is and agrees that she's worth more alive than dead. Because she owes Fett for saving her life, she agrees to help him break into Jabba's Palace and retrieve his ship, Slave 1.

The next day, the two set off for Jabba's Palace on a reconnaissance mission, using Shand's mini spy droid to take a look at the situation on the inside. Upon its return, the droid creates a hologram-like map of the inside of the palace, including where the guards are stationed. With this information revealing that tons of guards are patrolling inside, Fett decides that they'll need to time it with the guards' shifts in order to get to Slave 1.

Taking off on their mission, they enter Jabba's Palace after Shand cuts open the metal bars of a tiny, open-air window on the side of the building at ground level. Once inside, they first encounter the kitchen, with two droids cutting up various vegetables and cooking food. Fett quickly takes out the smaller of the two droids, moving on to the larger one, who's wielding six different knives, spinning them in an aggressive fashion very similar to that of General Grievous. Before Fett is able to get to him, Shand takes him out from behind. 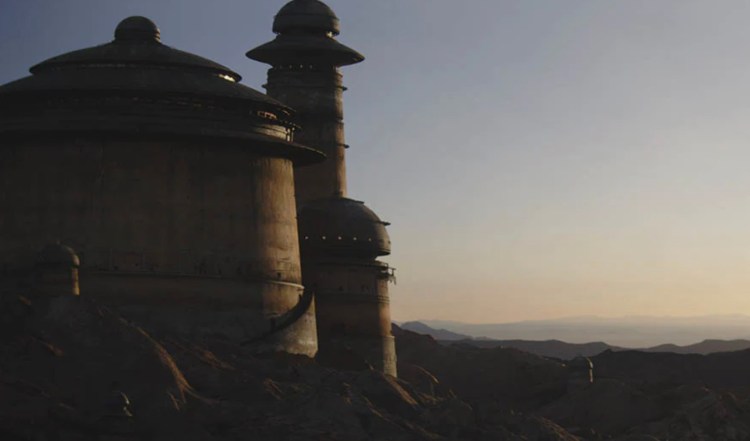 However, they're not quite done in the kitchen just yet. They hear someone coming, so they hide on either side of the kitchen's entryway while an extremely cute, little LEP Droid walks in and is wondering what's going on. A quick droid, it runs around the kitchen and through smaller spaces to avoid Fett and Shand, who eventually corner him. They don't kill him; instead, he turns himself off to avoid the situation altogether.

The two move on to the hangar holding Slave 1, which looks incredibly rusty, though a few Gamorrean Guards enter in behind them, forcing Fett and Shand to hide once again. They quickly take the guards out, but a horde of guards storm into the hangar, greatly outnumbering the two. They try to pick off the Pykes while moving closer to the ship; Fett is able to get into the cockpit while Shand stays behind and continues to take out the enemies.

Slave 1 turns on, though Fett is having a tough time maneuvering the ship out of the hangar and can't get the door to the outside of the palace open. Shand hops onto the back ramp of the ship and fights from up there, with some of Fortuna's men jumping up and onto the ramp to take her out. She's able to fend them off while figuring out how to open the outside door, which she does by firing at a weight holding the door up. With that, the two are finally able to fly out of the hangar. 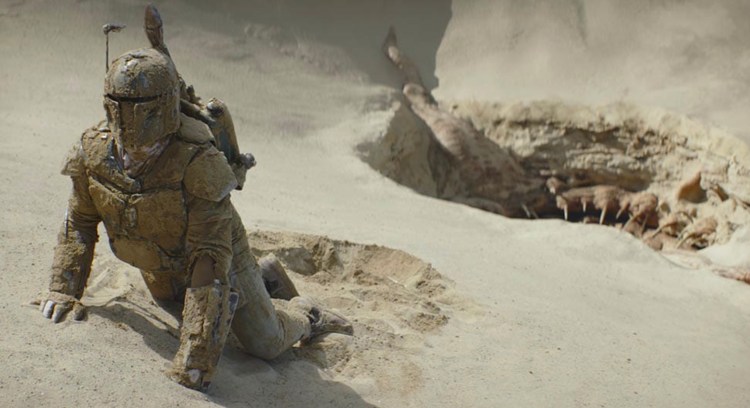 After escaping Jabba's Palace, they head over to the site of the Sarlacc pit, which Fett believes is holding his armor, obviously forgetting the fact that a bunch of Jawas stripped him of his gear. He flies the ship right on top of the pit in order to shine a light in and see better, but out of nowhere, the Sarlacc comes to life and tries to pull down the ship. The Sarlacc only lets go when Shand pushes a button to release a seismic charge into the pit—and what a throwback the sound of that charge was.

Now that the Sarlacc has been killed, Fett lands Slave 1 and heads into the pit in a deep search for his armor, though the only thing he comes up with is a thick layer of mucus from the inside of the Sarlacc. And with that, they head back to set up camp and end the night sitting by the fire. Shand asks Fett if he's serious about starting his own "house" (collective) in Mos Espa, and he is, explaining how avoidable most of the jobs he took as a Bounty Hunter were. He invites her to join him in his new journey, and though she's skeptical, Fett offers her loyalty (and money) to be his partner.

Back in the present day, Fett exits the bacta tank and is told that he is fully recharged, which means that we—as the audience—are now caught up on his backstory. Fresh out the tank, Fett takes on Mos Espa, making the rounds and stopping at Garsa Fwip's cantina to show his face.

While there, he watches on as a fight breaks out between Black Krrsantan and a few Trandoshans, simply because Krrsantan was annoyed by their rowdy behavior. Flinging them all across the room, he's about to kill one of the Trandoshans when Fwip comes in and gives him a good talking to. However, it's not completely good enough, as Krrsantan decides to bite one of their arms off before exiting the building. Things go back to normal almost immediately in the cantina, as Fwip says, "Hit it, Max," which signals the band to resume playing, loose arm on the floor and all.

Fett follows Krrsantan outside and simply says, "Looks like you could use a job," and judging by the timbre of his growl, it seems (I hope) that he'll be joining the squad.

Fett and Shand meet with the three families who control Mos Espa: the Trandoshans, the Aqualish, and the Klatoonians, the latter of whom I didn't realize resembled the Whos from How The Grinch Stole Christmas. Fett discusses how they all need to join together as one force as the Pykes are clearly gearing up for some sort of war against him and the control of Mos Espa. Though they're not sure if they want to create negative tension with the Pykes, they finally agree to remain neutral in the event that the Pykes want them to turn against Fett.

Afterward, Fett and Shand return to the palace and reflect on the meeting, agreeing that a war with the Pykes is definitely imminent and that they need to prepare. When Fett says that he's lacking the muscle needed to take on a war like this, we hear the theme of The Mandalorian quietly play, possibly alluding to a Mando appearance for the next episode.