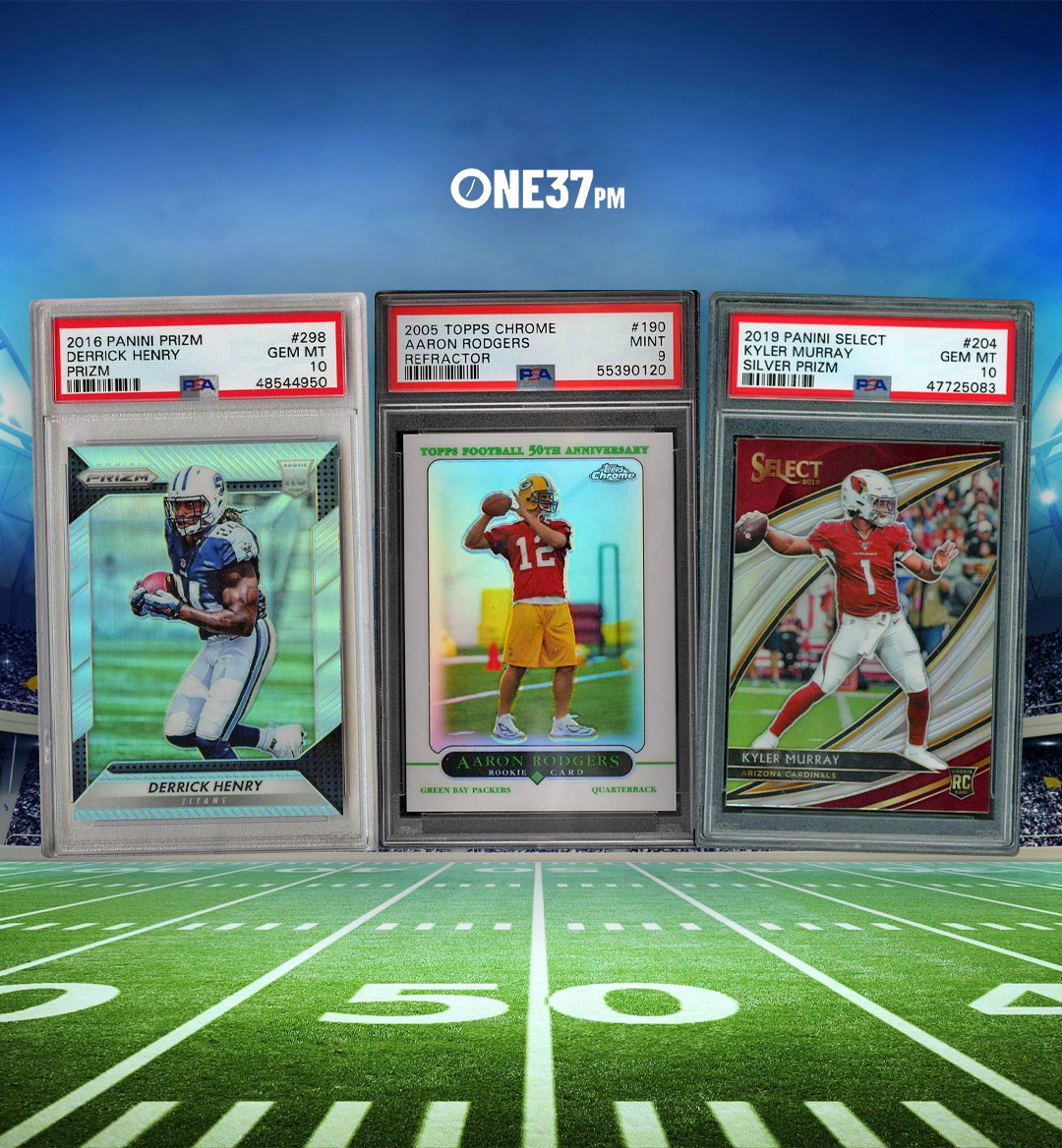 One of the most fascinating things about the modern sports card era is observing the cycles of supply and demand relative to the schedule of a season. When I first returned to the hobby, I got plenty of advice from my local sports card shop owner, but one that stuck out to me was to be smart about when I buy cards for particular sports.

The idea is simple: during the off-season, without much media coverage, you can typically buy cards for less money. Whether it’s a PC (Personal Collection) item or a stash to flip and fund bigger cards, those of us who are disciplined usually yield the most benefits.

Football is a particularly fun sport to follow these cycles because it’s the most-watched sport in the United States. The first round of the 2021 NFL draft brought in over 12 million viewers and 40 million people play Fantasy Football. There’s no shortage of excitement, media coverage and content as the season draws closer.

Out of the three major sports–basketball, baseball and football–the latter has the longest off-season (March - July) and it opens the door to more buying opportunities for those looking to get ahead of the cycles.

We’ll dive into what’s been happening in the football market, when we should expect it to ramp up again, and we’ll cap off why football is still one of the most exciting niches in the hobby for collectors and the risks that come with it.

Note: I am not a Financial Advisor and this is not intended to be financial advice.

Who Are Football’s Biggest Off-Season Gainers? 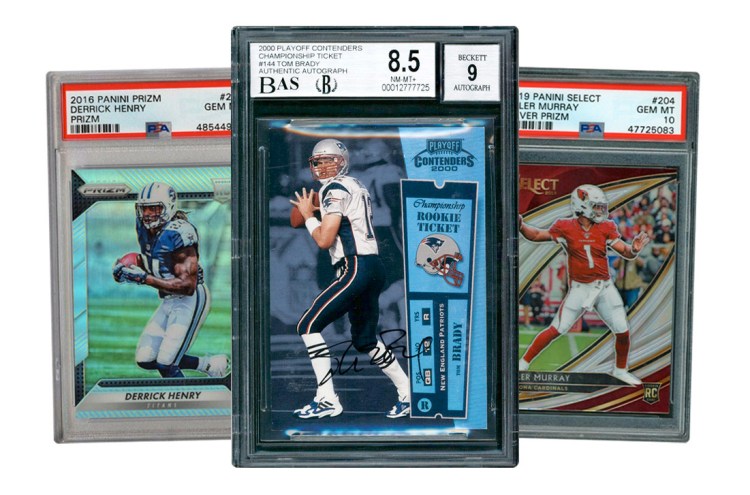 The football market is a mixed bag right now - there have been record sales and upward trends as well as downward trends. At the top of the market, Tom Brady’s Contenders Championship Rookie Auto set a new record with a $2.25 million dollar sale that puts football into the same stratosphere as basketball and baseball cards.

For football cards that are more in the reach of the average collector and investor, we have some interesting behavior this off-season. At first, it looked as though the off-season buying window was getting shorter and that the market was getting smarter and more aggressive. There were a few examples of rookie cards hitting new highs during a time when the market typically dips:

Despite these record sales (which have since retreated a bit), the general market is trending downward.

However, there are three fast-risers that have sustained their price increases this off-season: 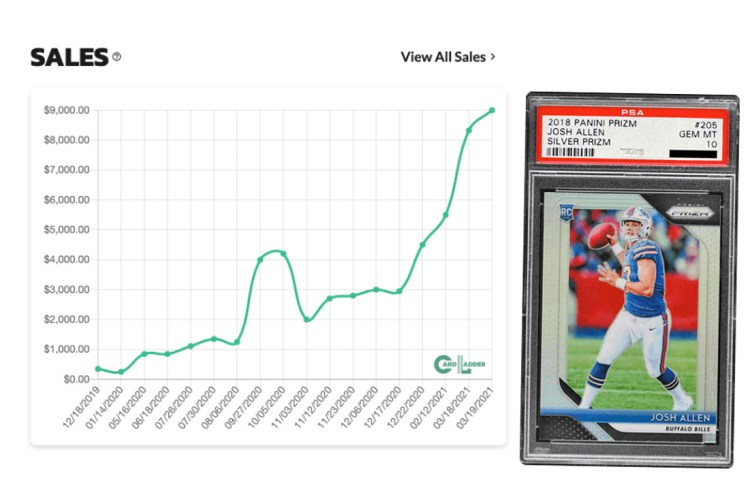 This is a chart for the 2018 Josh Allen Prizm Silver PSA 10 rookie card, with a population of just 25. On March 19th the card set a record price of $9,000. That’s double the price of the card from 12/22, in the midst of a promising season where he finished 2nd in MVP voting.

Allen’s base PSA 10 Prizm rookie has a much higher population (971) and has been a little more up-and-down, but the general trajectory has been up and to the right: 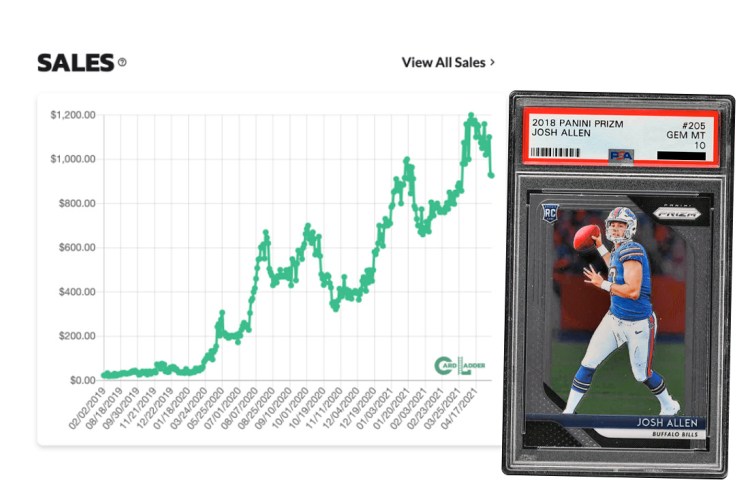 This is our first indication that while a certain player may be getting attention, the rarer card has commanded a more significant premium and at a higher proportional growth rate. The base card increased 49% from December 22nd to its most recent sale, where the Silver increased 100% in the same time period. 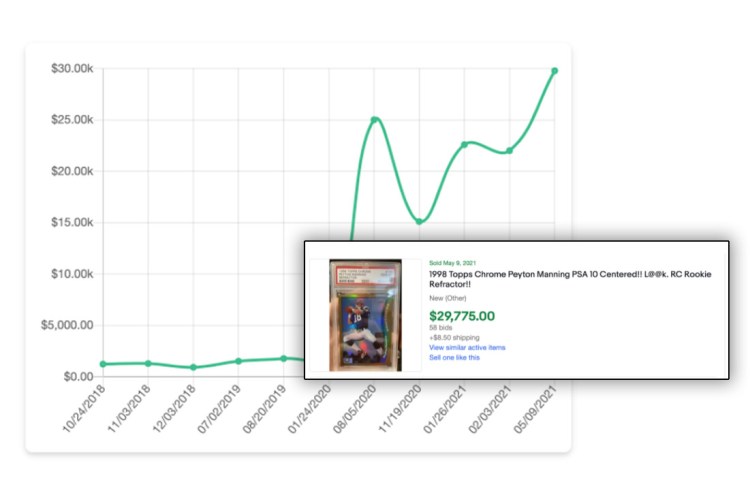 Manning was named to the Hall of Fame in February, with an ensuing induction planned for August. While his base Topps Chrome has trended a bit downard in recent months, it is still up 58.4% since December 21st.

The refractor, with its new record sale, is up 98% since November. 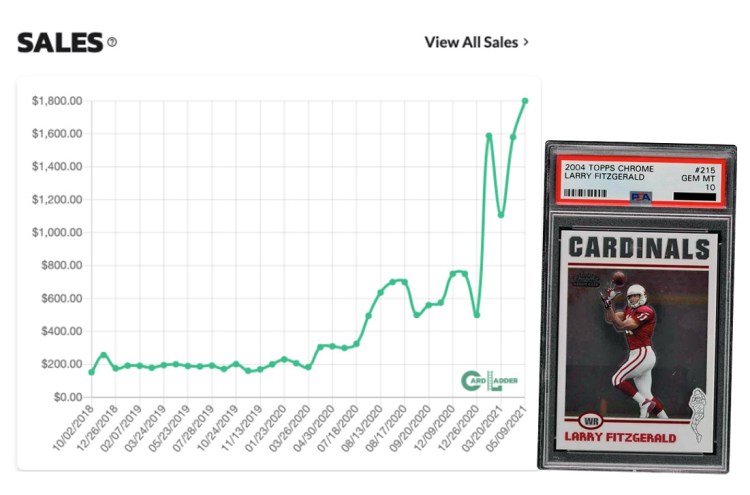 The final card on our fast-riser list is Wide Receiver Larry Fitzgerald and his 2004 Topps Chrome Base PSA 10 rookie.

After analyzing the data, this wasn’t quite the list I expected: the non-MVP and non-Super Bowl winning QB, a retired yet accomplished QB, and a non-QB, near-retired, future Hall of Famer.

Football cards can be a tricky analysis, mainly because of low population. For example, the Lamar Jackson Silver Prizm Rookie PSA 10, Baker Mayfield Prizm Silver Rookie PSA 10, Aaron Rodgers Topps Chrome Refractor PSA 10 and many others haven't had a recorded sale in months. It’s likely this list would have been a bit bigger if more transactions took place, but the lack of supply sets the stage for potential increases if a card is listed.

Generally, the football card market is behaving as expected - there were some price run-ups at various times this off-season, but the market is trending downward since last season’s highs. 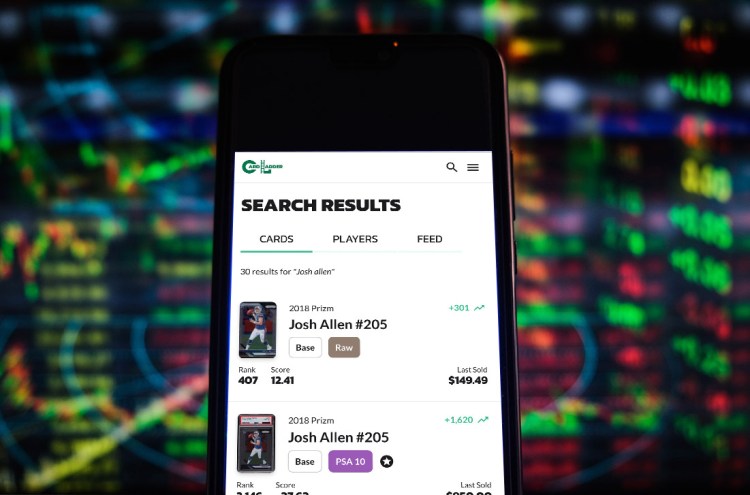 Downward trends are never fun unless you are a disciplined buyer, but when could we expect the football market as a whole to pick up speed?

For this section, we’re going to look at a bunch of graphs to clue us in on the answer: 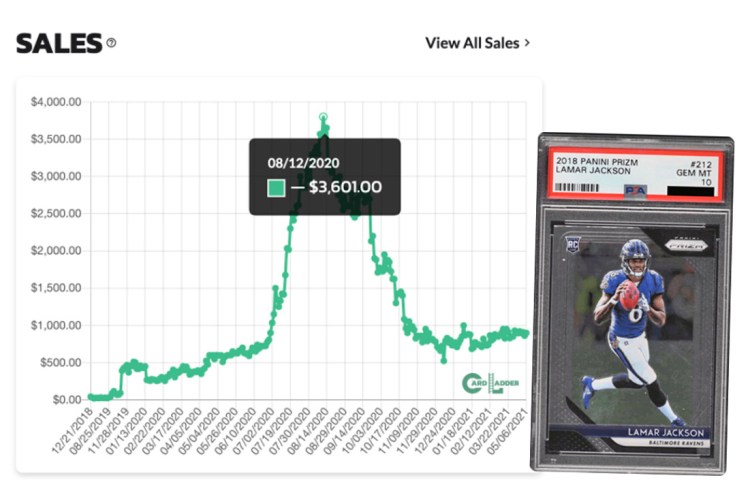 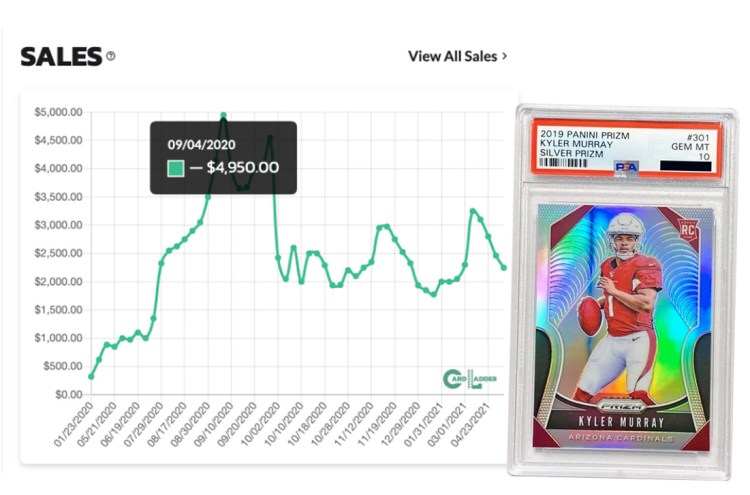 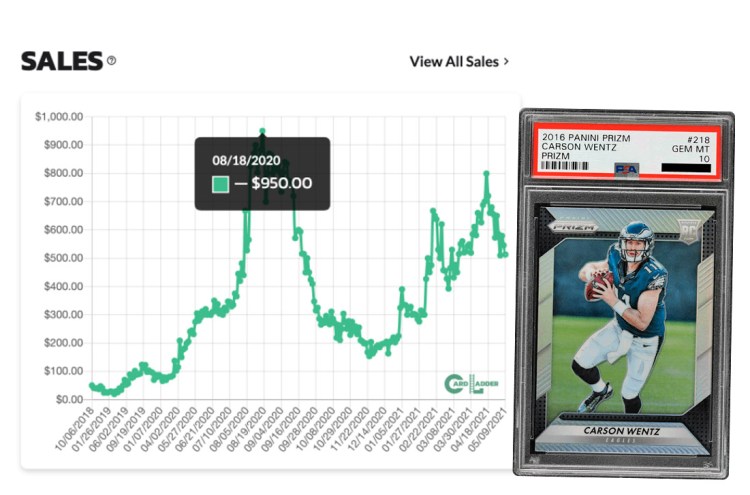 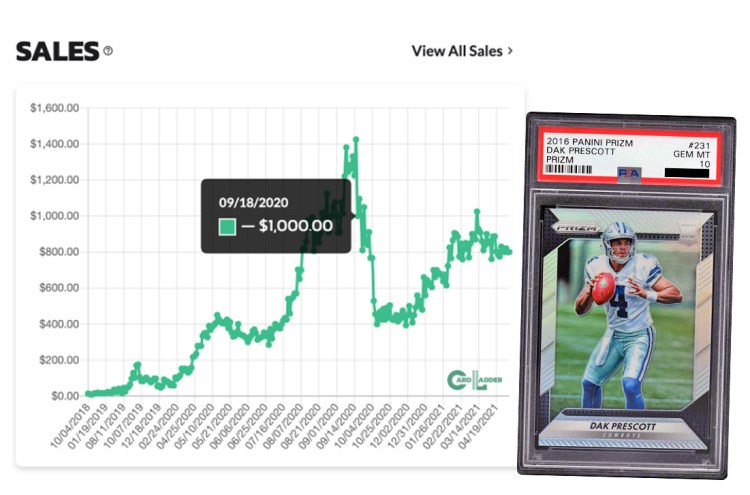 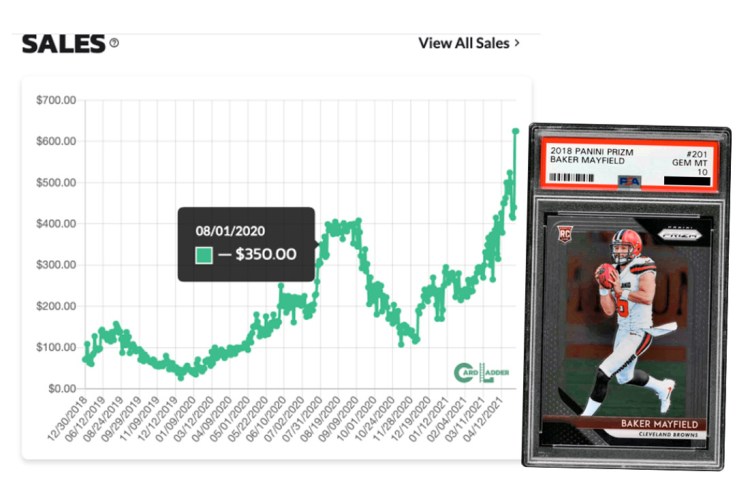 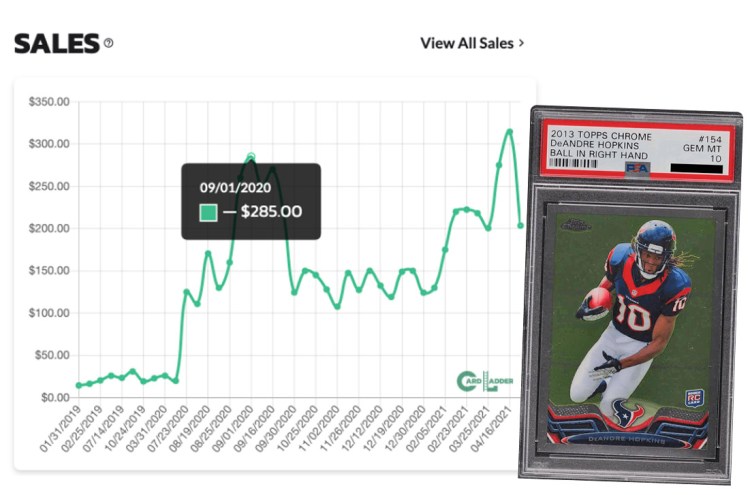 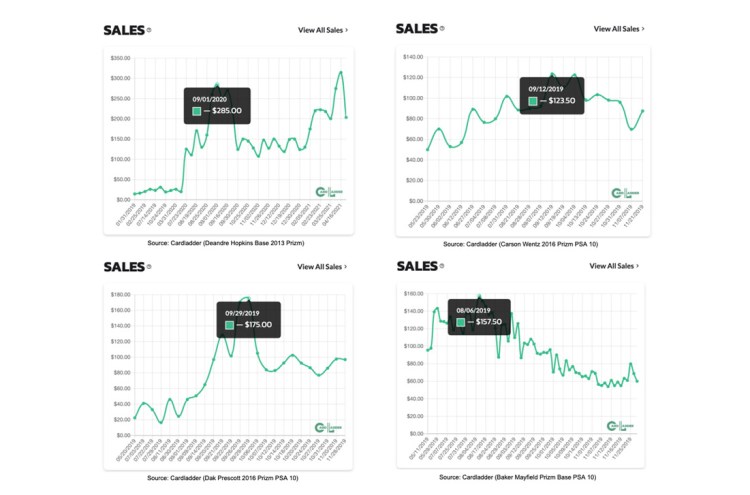 Two years of data indicates that August and September are the likeliest peak times for football card prices. There are plenty of exceptions, and this doesn’t mean it will happen exactly the same way every year, but it’s reasonable to expect a similar pattern going into the fall of 2021.

How to Think About Football for Investing and Collecting 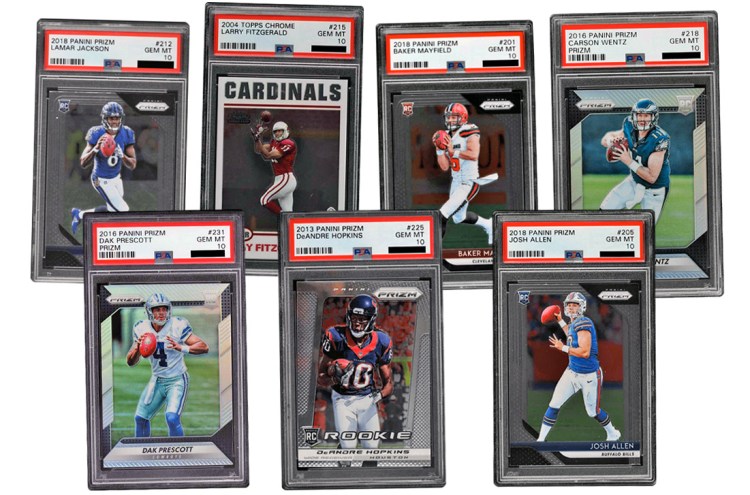 Football cards are an exciting niche to collect in because cards don’t command the same prices as counterparts in the NBA and MLB and there’s plenty of off-season to get a good deal. If you’re a collector, premium cards can be within close reach.

This is either a risk, or an opportunity, depending on how you look at it.

There’s opportunity in cheaper entry, and possible low-hanging fruit, like positional players, which burst onto the scene last year: 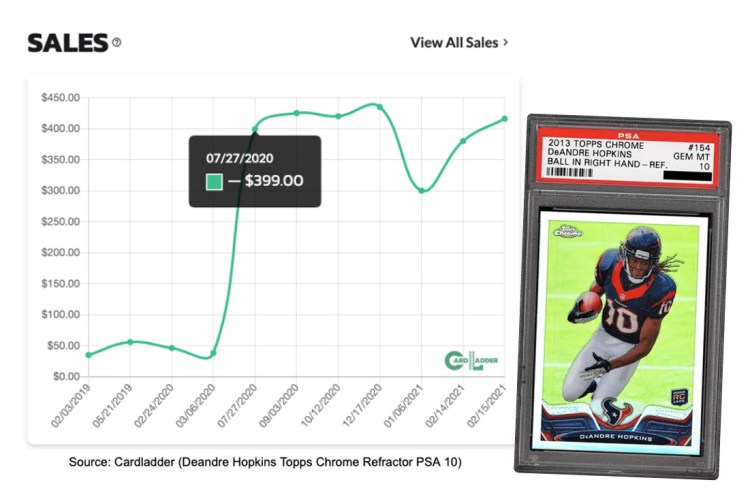 A Deandre Hopkins Topps Chrome Refractor PSA 10 could have been had for $38 in early March of 2020. The card is a pop 36 of a top wide receiver. While it was before the sports card boom, as a collector, there’s nothing better than scarce, affordable cards of accomplished pros.

On the other hand, football has its downsides. It’s not as popular globally, players wear helmets (less recognizable), there’s more of them on the field than basketball, and injuries can prevent people from betting big on these cards.

While there’s not much recent data available, past analysis has shown that the NFL has 4-5x the injury rate of other pro sports, including the NBA, MLB and NHL.

Not many people think about possible injury when they buy at peaks before the season, but they can have a devastating effect on card values.

Even if the player you collect doesn’t get injured, the teammates he depends on for success can impact value if they sustain an injury.

This is likely why 2 of the 3 fastest growing off-season sports cards are from accomplished players. One retired. Another, nearly retired. This will likely flip come August, to promising 2nd, 3rd, and 4th year Quarterback and positional players who could have a big season and bring big profit.

Football is a lot of fun because of its popularity and it’s cards are starting to rival the prices of basketball (Patrick Mahomes Prizm Rookie PSA 10 is now more valuable than the Luka Doncic Prizm Silver PSA 10), but be wary of the injury risk it carries compared to other sports.