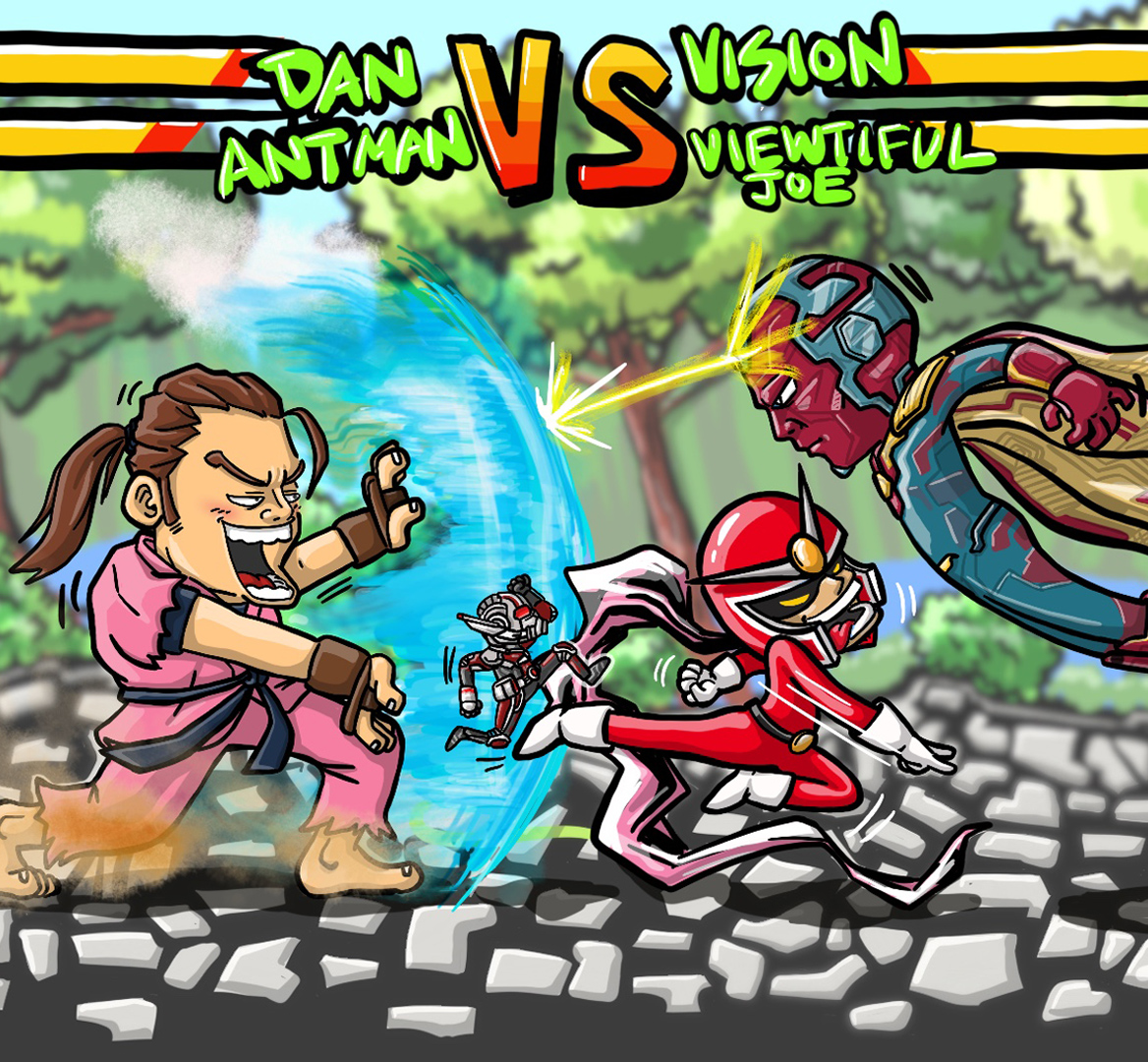 Gamers are finally getting treated to interactive experiences that do right by the Marvel source material. 2018’s Spider-Man swung over to the PlayStation 4 on behalf of Insomniac Games and managed to become one of the year’s best releases. On mobile, standout titles such as Marvel Battle Lines, Marvel Future Fight, Marvel Strike Force and Marvel Contest of Champions have dominated the top games charts.

The next major Marvel game on the horizon is the latest installment from the Marvel Ultimate Alliance franchise. The beloved action RPG series is returning as a Nintendo Switch exclusive, developed by Koei Tecmo’s Team Ninja studio. It certainly appears Marvel is looking to produce another universe that can thrive alongside the thriving Marvel Cinematic Universe: the Marvel Gaming Universe.

We all know a Spider-Man sequel for PS4 (or PS5, perhaps?) is a foregone conclusion. But so many other Marvel characters could thrive in AAA-gaming adventures of their own. If these games are ever slated to come to fruition, these are the development studios that should handle such a massive undertaking.

The less said about Marvel vs. Capcom: Infinite’s faults, the better. The gameplay as a whole is pretty damn great. But the lackluster visuals, disappointing final roster and rough story mode presentation keep it from reaching the heights of previous entries. Longtime fans especially dislike the lack of playable X-Men and Fantastic Four characters because of rights issues. But now that Disney has acquired Fox, those superhero lineups are fully connected to the Marvel universe once more.

If Marvel wishes to do right by the “MAHVEL!” community and right the wrongs of Infinite, a fourth mainline sequel should be made. Return to the mayhem of 3v3 battles, carry over the tag/assist elements of Infinite, embrace the entire roster from that release and throw in a few X-Men and Fantastic Four characters while you’re at it, Capcom. The dream match possibilities are endless: Cyclops vs. Leon S. Kennedy, Gambit vs. Nero, and The Human Torch vs. Rashid should get you excited. Give us a few fan favorites from Ultimate Marvel vs. Capcom 3, invest money into the production budget for this oft-requested sequel and the FGC will finally have their “WHEN’S MAHVEL?” question answered.

Swedish development studio MachineGames brought Wolfenstein back to prominence in 2014. By crafting a cast of lovable characters and embracing a visceral fast-paced FPS style, The New Order morphed into one of the best current-gen shooters ever released. The Old Blood expansion and The New Colossus sequel provided further proof that MachineGames clearly knows what it’s doing. You know who really needs a story-driven FPS that’s made in the same vein as those three games? The Punisher.

Frank Castle, Marvel’s hard-core vigilante, has been featured in a decent retro beat ’em up and a slept-on third-person shooter. MachineGames should deviate from those two genres and throw Mr. Castle into a FPS that pits him against his rogues’ gallery. There are some awesome stories to be told as you command The Punisher’s huge weapons arsenal and seek out villains such as Barracuda, Bushwacker, Carlos Cruz and Jigsaw. Include some heart-tugging cut scenes that detail the demise of The Punisher’s family and you’ll have another amazing MachineGames project on your hands.

The fact that a really good Iron Man game still doesn’t exist is disheartening. Lame movie tie-in titles and cheap mobile games have done Tony Stark no favors. It seems as though his best video game work has come via guest-starring roles in Lego’s Marvel games. The PS VR Iron Man game looks fine, but it’s not what everyone was truly hoping for. After gamers got a taste of the fluid flight mechanics of Anthem, the need for an awesome Iron Man game grew to epic proportions.

The world of Iron Man is full of explosive action. The development studio that’s all about high-octane action is most certainly PlatinumGames. Anyone who’s played the underrated Vanquish knows just how true that statement is. Imagine an insane third-person action game that mashes up the shooting elements of Vanquish with the flight control of Anthem. And to really put it over the top, make War Machine a playable character and turn the game into a co-op affair. Iron Man & War Machine, developed by PlatinumGames. Sounds awesome, right?

The financial success of the Black Panther movie was a revelation. Two statements rang true after that film’s release: There’s a huge market out there for films based on heroes of color, and fans are open to watching movies based on lesser-known comic book characters. The next logical step for Marvel is to help create a game that takes players on a digital journey to Wakanda.

If Marvel ever chooses to work with Activision, the dev studio that should get the Black Panther game making honors is Raven Software. Raven Software is a proven commodity when it comes to crafting quality Marvel games. The brand is responsible for giving us the X-Men Legends series, the very first Marvel: Ultimate Alliance and the amazing X-Men Origins: Wolverine. The Black Panther game the world desires would like an even better version of the studio’s Wolverine game with a much larger world to explore. It’d be refreshing to see Raven Software take a break from developing Call of Duty and work extra hard to produce an action game befitting of the great T’Challa.

The PS4 got an exclusive Marvel video game that loyal Xbox One fans would have loved. The next logical step for Marvel would entail offering the Xbox brand its hero of choice. But instead of just one hero, wouldn’t it be better if that console got some “heroes” instead? Now that Xbox Game Studios has several quality dev studios under its umbrella, one of them should be given the task of crafting a game for these heroes—an intense action game made in the vein of Heavenly Sword and DmC: Devil May Cry that’s all about The Defenders.

Ninja Theory, the development studio that created those two top-tier titles, should handle this endeavor. This action-packed experience would offer singular and multiplayer beat ’em up sections starring Daredevil, Jessica Jones, Luke Cage and Iron Fist. Ninja Theory’s top-notch visual work would do wonders for each character, as would the studio’s clever handling of mental anguish, as seen in Hellblade: Senua’s Sacrifice. If that type of work can be employed in a unique manner when handling Daredevil’s use of sound over sight, then Ninja Theory could truly create something special. This proposition could be the Marvel gaming exclusive that Xbox owners desire so badly.

Good ol’ Peter Parker shouldn’t have all the PS4 exclusive fun. Sony’s prized console would do well to put another Marvel icon in the open-world game spotlight. One of Sony’s finest first-party studios, Sucker Punch Productions, has already shown its superhero game-producing prowess with the inFamous franchise. Once they wrap up work on Ghost of Tsushima, Sucker Punch should approach a Marvel property for its next release.

Thor and Doctor Strange immediately come to mind. Sucker Punch has proved it can showcase flashy visual elements in a massive open world and craft an engrossing tale worth telling. Either of these Marvel icons would work great within the confines of a Sucker Punch produced open-world action game. Smashing evil throughout the nine realms as Thor or clashing with the mythical villains within the Marvel Universe as Doctor Strange both sound like gaming at its finest.

7. Guardians of the Galaxy // Obsidian Entertainment

Xbox Game Studios has managed to acquire another talented development studio in Obsidian Entertainment. Obsidian is most known for releasing some of the finest RPGs ever released. Anyone who’s played South Park: The Stick of Truth, Neverwinter Nights, Dungeon Siege and Fallout: New Vegas knows this. Not only does Obsidian know how to create great games, the studio knows how to add comedic themes to gameplay.

Guardians of the Galaxy has already gotten a game thanks to the now-defunct Telltale Games. But the much darker approach to the characters' upbeat personalities and adventure game elements were a bit off-putting for some. Star-Lord, Gamora, Drax the Destroyer, Groot and Rocket Raccoon would work much better in a top-down action RPG full of hilarious banter. Journeying through the galaxy while partnering up with Nova and other space-faring Marvel heroes would make for a great GOTG experience. The Xbox brand needs a quality RPG to represent its current- or next-gen gaming machine. Obsidian Entertainment should snag this as soon as it finishes The Outer Worlds.