Smoke DZA: ‘It’s up to entertainers in the world to really shed light on it instead of making it look like a taboo’ 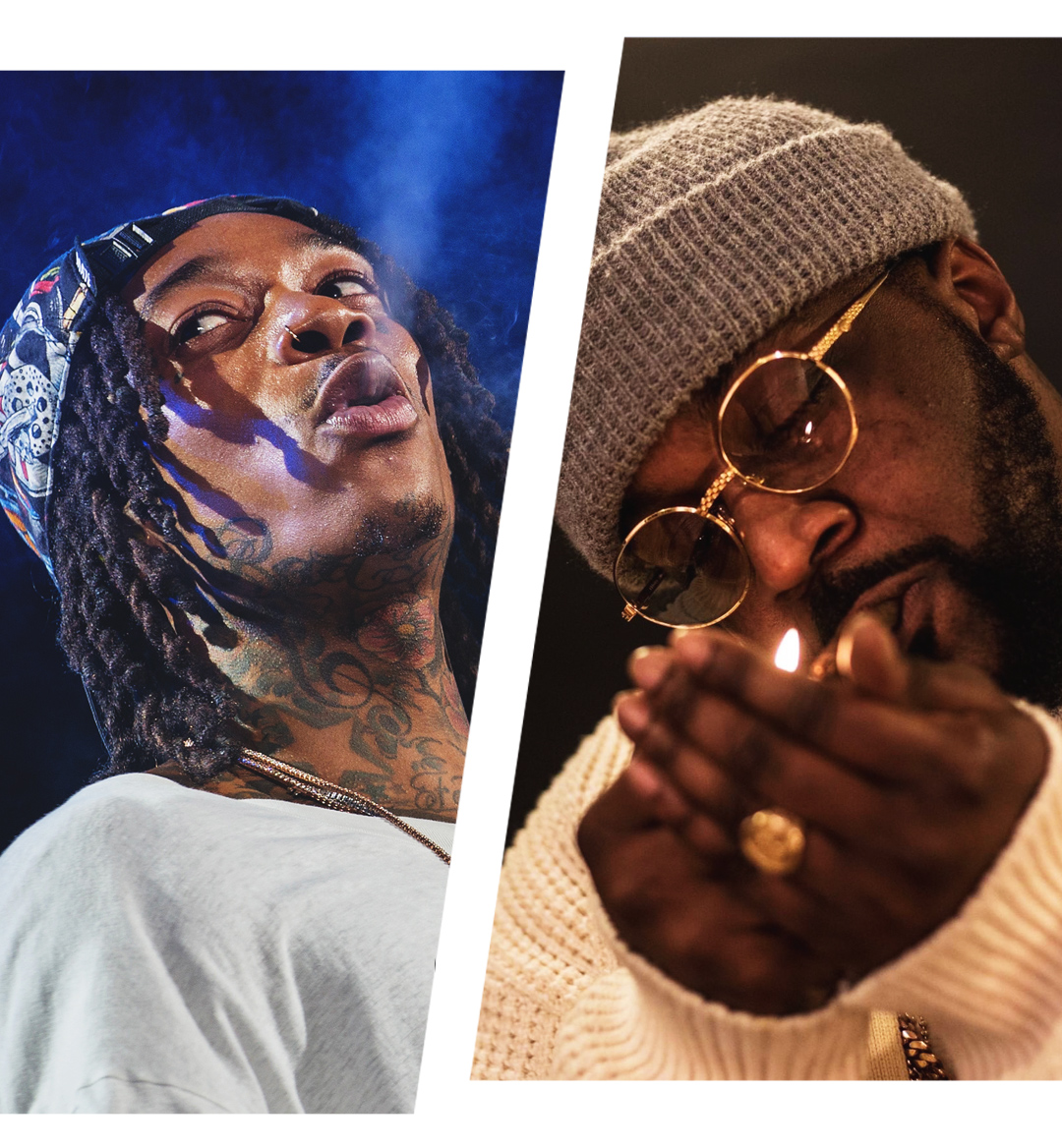 Did you catch that Super Bowl LIII commercial for cannabis firm Acreage Holdings? Nope? Neither did the other 98.2 million people who watched the Super Bowl. That’s because CBS rejected the company’s $5 million offer to air a 30-second commercial during the year’s biggest sporting event. CBS reportedly has a no marijuana-related advertisement stance, even in the face of the recent wave of marijuana legalization that’s swept the nation over the past four years.

With medical marijuana being legalized in 33 states, two-thirds of Americans supporting legalization and more than $12 billion being spent on marijuana in 2018, there’s undeniably a massive market for the product. Just one problem: How do you actually market it? Short answer: You have to be creative, and you need help from hip-hop artists (“We're the biggest promoters” rapper Smoke DZA told ONE37pm.)

The misconceptions associated with marijuana are so divisive and widespread that it’s impossible for marijuana-based companies to promote their business without educating the audience on its safety. The Drug Enforcement Agency (DEA) still has marijuana classified as a “schedule 1 drug,” a category designated for “drugs with no currently accepted medical use and a high potential for abuse.” Imagine if alcohol brands had to educate their audience on drunk driving fatalities rather than simply ending every commercial with the benign “drink responsibly” advisory. This reality forces marijuana brands to develop unconventional tactics to market the product, even if it means not marketing “marijuana.”

“‘Marijuana’ actually associates, I believe, a negative connotation. We like to use ‘cannabis’ because it’s the scientific name. I think that’s been a really great way to rebrand it,” Cannabrand CEO and founder Olivia Mannix told ONE37pm.

Cannabrand launched in 2014 as the world’s first marijuana-focused marketing agency aiming to "rebrand cannabis." Since its inception, the company has helped numerous companies, including dispensaries, rebrand from dingy, counterculture outposts to elegant stores with a clean look that could rival Whole Foods. But it hasn’t been easy. "We had the first cannabis commercial [for now-defunct vaporizer company Neos] slotted to run on ABC News Channel 7 local in Denver. They sought us out and we created this commercial,” Mannix said. “Last minute, the day before it was supposed to air, they pulled it and they never aired it.” 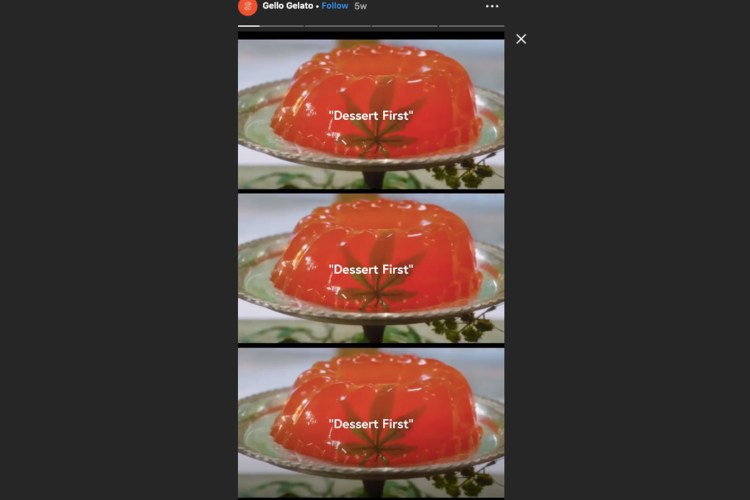 Another creative way marijuana brands market is by selling the experience, not the product. Mario Guzman, better known as Mr. Sherbinski, is the internationally renowned breeder and creator of world-famous strains such as Sunset Sherbert and most famously Gelato. On the Sherbinski Instagram page, its four strains—Gello Gelato, Sunset Sherbert, Mochi and Bacio—are promoted in a series of short IG story highlights. You’ll notice all of the promos spend considerably more time selling the experience of smoking Sherbinski strains than showing people smoking the strains. For the Gello Gelato promo, you see a Jell-O mold and booty shaking more than you see the blink-and-you’ll-miss-it shots of the marijuana plant or anyone inhaling it.

With all the debauchery that is not only allowed on social media but rewarded with huge fan engagement, you’d assume social media would be this heaven-sent solution for marijuana brand’s marketing issues. Well, yes and no.

In terms of marketing, the internet is king. Advertisers spent nearly $40 billion more on internet advertisements than television in 2018, topping TV for the second year in a row. Nearly $20 billion was spent on advertising on social media. For a business in this era, to not be on social media is tantamount to not existing.

"We do have an issue with Facebook shutting down our pages sometimes. So, we have to be really careful on how we're promoting our content and making sure that it is really educational and informative,” Mannix said. "Facebook views cannabis as an illicit substance. So, basically, they don't allow, technically, cannabis companies to have pages."

Mannix said that Instagram, which is owned by Facebook, would also shut down posts and pages using marijuana-related hashtags, which on Instagram is key to expanding your brand’s visibility. Facebook’s policy for drug and drug-related advertisements prohibits content that “promote the sale or use of illegal, prescription, or recreational drugs.” This has caused confusion with companies arguing that Facebook allowing advertisers to choose to market to states where the sale of marijuana is legalized should still fall within their guidelines. The problem is, if Billy from California, where marijuana is legalized for recreational sale, shares a sponsored post for a new vape pen with his Facebook friends, that ad could digitally cross state and international borders and end up in places where the sale of marijuana and marijuana-related products are illegal.

That seems to be Google’s thinking with the search giant banning all marijuana ads due to it not being legal on a federal level. Mannix calls this a problem, but says Cannabrand “comes up with creative and strategic ways to kind of circumvent the problem." However, Facebook and Google are advertising behemoths representing 58 percent of the advertising market in 2018. The two are too large and influential to ignore, so marijuana brands have to be more than creative to grow. They have to be everywhere.

Long before the recent wave of marijuana legalization had everyone from Barney’s to NBC openly embracing marijuana, Hip-hop was integrating the plant into the fabric of its history. Dr. Dre literally built his solo career on The Chronic. Many songs from rappers like Wiz Khalifa and Redman reference marijuana. Saying hip-hop artists were huge promoters of marijuana in the entertainment industry over the past 30 years wouldn’t be hyperbolic; it’d be an understatement.

"We're the biggest promoters [of marijuana],” rapper Smoke DZA told ONE37pm. “You can't market your shit on Instagram or wherever it is you're at. It's not going to hit until it's confirmed by someone in the world that I live in. Then, it's like being a hypebeast over it. 'Oh my god. You got Gelato?!' That's when the price point goes up and that's what makes the guys who make the strains legendary. We drive the traffic.”

DZA is one of hip-hop’s biggest champions of marijuana this decade. He’s released projects named George Kush Da Button and its sequel George Kush Da Button (Don't Pass Trump the Blunt.) He’s worked with stoner legends such as Wiz Khalifa, Curren$y, Devin The Dude and Snoop Dogg. He’s a founding member of marijuana-based clothing and lifestyle company The Smoker’s Club, and is working on putting out his own strain. He knows firsthand the power rappers hold in spreading awareness about a marijuana brand in areas the brand would’ve never been able to reach, legally.

"The thing about visibility, a lot of people will never go to L.A. or the Bay. I'm not saying they don't want to go, they can’t go. So, they'll look to a Smoke DZA, Wiz Khalifa, Curren$y, Young Dolph to hear about that and they aspire to do that."

Mr. Sherbinski admits hip-hop has played a huge role in his brand’s popularity, but he told ONE37pm he’s never entered into a formal, monetary deal with a rapper to promote the Gelato strain in songs. To him, that fact plays a part in the brand’s authenticity with its customers. The respect from the tastemakers is earned, not purchased. “I have natural, organic relationships with artists in the Bay and Bay Area. We were able to give cannabis to old school guys like B-Legit or Berner, which ended up in the hands of guys like Wiz Khalifa,” Sherbinski said.

The endorsements may have not been official, but their effect sure was. In the first week of February 2017, burgeoning rap star Young Dolph named his mixtape after the Gelato strain. Weeks later, Migos’ member Offset told the world he was smoking Gelato on Calvin Harris’s double-platinum single “Slide,” which currently has more than 92 million views on YouTube alone. That same month, there was nearly four times as much Google search activity for the term “gelato weed” than the previous month. That’s the sort of free publicity brands dream of receiving.

Sherbinski admits “money can’t buy that exposure” and stops short of placing a monetary value on the impact hip-hop has had on his company. To him, since the rappers’ endorsements don’t direct consumers to a point of sale, it’s hard to put a value on how much revenue the promotion brought in. DZA understands the rules of marketing marijuana are still in the infancy stages, but he still feels as if marijuana brands are short-changing the hip-hop artists vital to their operations

“Yeah, I've been approached [to promote strains]. A lot of the shit is premature. I got a lot of disdain toward the brands and shit, too. You can't really fault them, but a lot of shit that I promote, it goes where it goes and I don't really get the good end of the stick in this situation. Whether it be compensated or going into some businesses.”

It’s abundantly clear that for the cannabis industry to fully actualize its marketing potential, the perceptions and laws around the plant must change

It’s abundantly clear that for the cannabis industry to fully actualize its marketing potential, the perceptions and laws around the plant must change. Mannix travels with the National Cannabis Industry Association to Washington, D.C. to lobby for legislation to help the cannabis industry. She’s even working on a clinical trial, in Israel to get more information around cannabis and helping people, in general.

Mr. Sherbinski has also leveraged his popularity and long history in the cannabis industry to speak on panels about the business of selling cannabis for Business of Fashion and ComplexCon. He’s also the first marijuana cultivator to sell in Barney’s new cannabis store, the High End. He also wants to change the perception of marijuana from simply a party drug to a life-changing one."When you're giving opiates and things to your father, your mother, your loved ones, you're going to think twice like, 'Wow, I'd rather give them cannabis. I really do believe in CBDs,” Sherbinski said.

Rappers also aren’t waiting around anymore for marijuana brands to properly partner with them, they’re doing it themselves. Dozens of hip-hop artists have jumped into the cannabis business, with many of them owning their own companies. For the sake of the marijuana industry, hip-hop artists will need to do more than smoke and sell marijuana; they’ll need to help rebrand it.

"It's up to entertainers in the world to really shed light on it instead of making it look like a taboo and just show how it helps people,” Smoke DZA asserted.

Only after marijuana misconceptions are ground to dust can the industry be taken to higher heights. If all goes well for the marijuana industry, you may one day be watching Tom Brady compete for his 15th Super Bowl and see an advertisement of someone enjoying a good toke of Gelato.