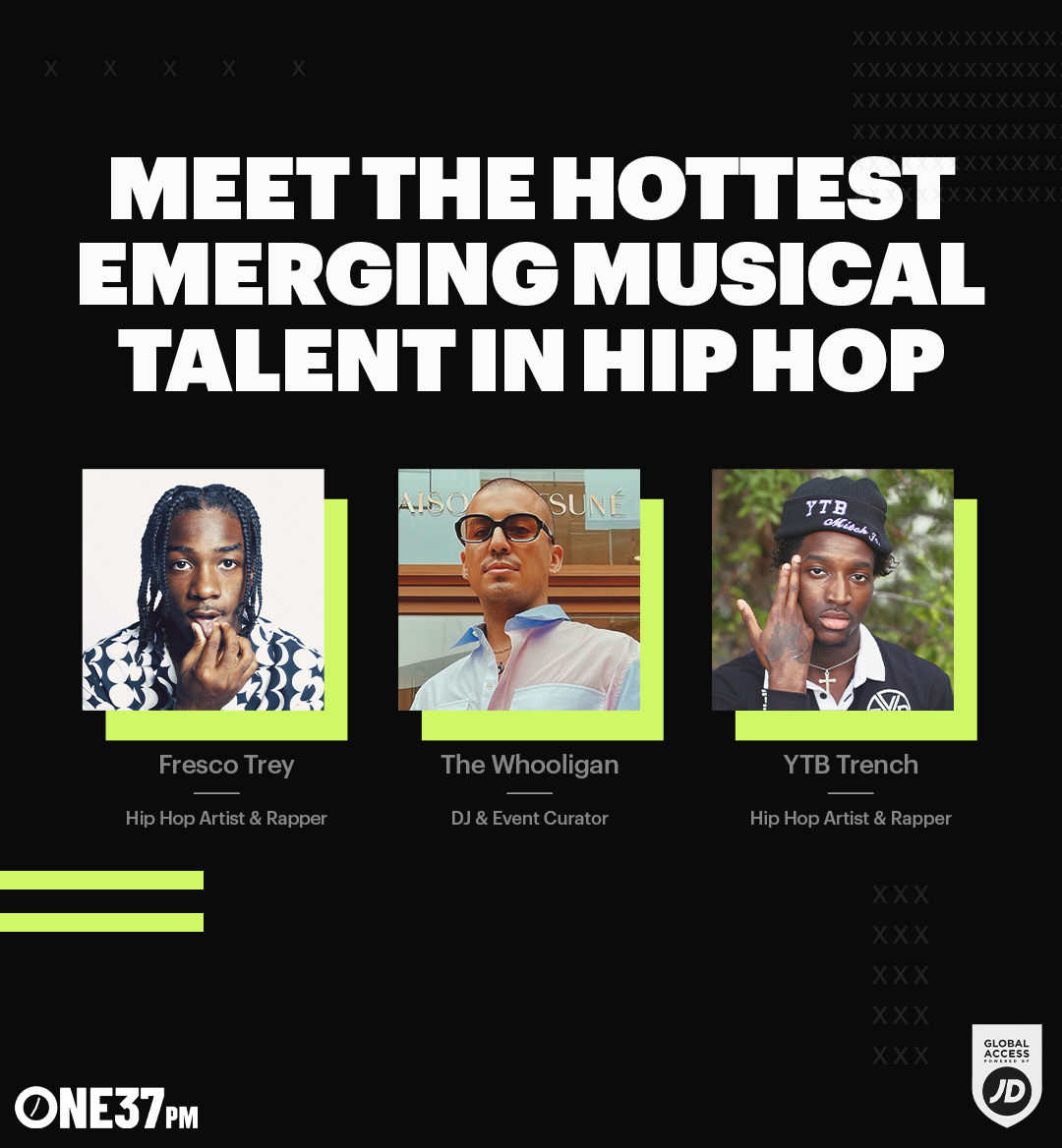 The first edition of our new IG Live Room series with JD Sports is up and running! Through the course of this social series, we'll be connecting with various up-and-coming talent in the worlds of hip-hop, gaming, and sports. These IG Lives will give you chance to not only learn more about the rising stars, but also take a deeper look at how they incorporate fashion into their respective careers—specifically with styles from JD Sports, a universal brand that gives consumers access to many brands and styles as a part of their Global Access program. JD Sports Global Access provides an easy way to purchase these styles from all over the world by giving you first priority with exclusive products, so you'll never have to worry about missing a drop.

In this debut installment, JD Sports is tapping into the hottest emerging talent in the music scene, with a special hip-hop segment hosted by ONE37pm’s very own Mike Boyd and featured musicians Fresco Trey, YTB Trench, and The Whooligan in an exclusive conversation centered around fashion and music.

If you’re not familiar with him already, Mike Boyd is the head of Artist Relations & Music Strategy at VaynerMedia and has a weekly podcast series called Monday to Monday where he interviews artists and features their music on his popular playlist. Boyd started the conversation by asking each artist how they incorporate fashion into their respective careers and how their musical experiences have expanded their individual worlds.

Fresco Trey, a Memphis-born star on the rise, answered first. “I’m more of a ‘cool-out guy’ when it comes to fashion as I like to be comfortable. I pick a lot of neutral colors like white, black, and brown to wear when I’m chilling. For me, going to Ghana was a great experience that really changed my perspective. They were just so happy, and honestly, that is what made me start looking at fashion and music differently. That trip made me more comfortable with both because I saw how content they were over there, and it helped me be more honest with my music.”

“I’m more of a 'cool-out guy' when it comes to fashion as I like to be comfortable. I pick a lot of neutral colors like white, black, and brown to wear when I’m chilling.

Known for his feel-good vibes, Trey has gone from a budding artist sliding underneath the radar to working with some of the entertainment industry’s finest in just two years. Trey is a trailblazer— extremely passionate about his artistry, recently collaborating with ATL producing legend Zaytoven in January (worth noting: Zaytoven typically doesn't work on smaller projects).

Next in the chat is YTB Trench, an Ohio artist representing the Cincinnati music scene who has been steadily releasing music over the past several months. The rapper recently unleashed the video for his single ‘F.O.F.G’ in May and has been featured on three collaborations with Young Thug: ‘Paid the Fine,’ ‘My City Remix,’ and the ‘Mob Ties Remix’ from Slime Language 2. “F.O.F.G” has quickly become the artist’s second-most-watched video on his YouTube page behind his popular single ‘Trenches,’ currently sitting at 120,000 views and counting.

Trench is rapidly gaining traction in his career and naturally has been thinking more about his personal style both on and off the stage.“Fashion has never really been a problem for me because Cincinnati has always been very versatile when it comes to style. It’s just second nature—I dress according to my mood. Trey mentioned being comfortable, but sometimes I don’t want to be comfortable. There are days when I want to throw on a collared shirt.”

Last but not least we’ve got The Whooligan, a globally recognized musician and DJ with over fifteen years of performing experience. He’s also an entrepreneur who uses his expertise to help new artists looking to make an impact. Whooligan wears many hats in between his music gigs as the founder and CEO of Room Service International and Source Radio, along with being the A&R/ Label manager of Wear Paradise Worldwide. But one thing’s for sure, his “drip” is always at the forefront.

“Honestly, I just want to be comfortable. I pull inspiration from both the hip-hop world and the house world as well. I get a lot of inspiration from my friends, too, because they are fashion designers and make their own apparel. We wear each other’s clothing, and we try to support each other in that sense. My international friends really blessed my style because they are sending me stuff from everywhere in the world. When it comes to my style, I like to keep it oversized.

As far as how music has changed my world—I owe everything I know about the world and different cultures through music and traveling.

As far as how music has changed my world—I owe everything I know about the world and different cultures through music and traveling. It's a blessing to travel to different continents and learn about their cultures, customs, food, and music. It's always a global perspective, and I’m super grateful that music has allowed me the opportunity to go to these places—South Africa has touched my soul.”

Check out the full conversation above, and be sure to check out the next JD Sportsx ONE37pm IG Live Room featuring the hottest streamers in gaming.