AKA the "Mona Lisa" of Baseball Cards 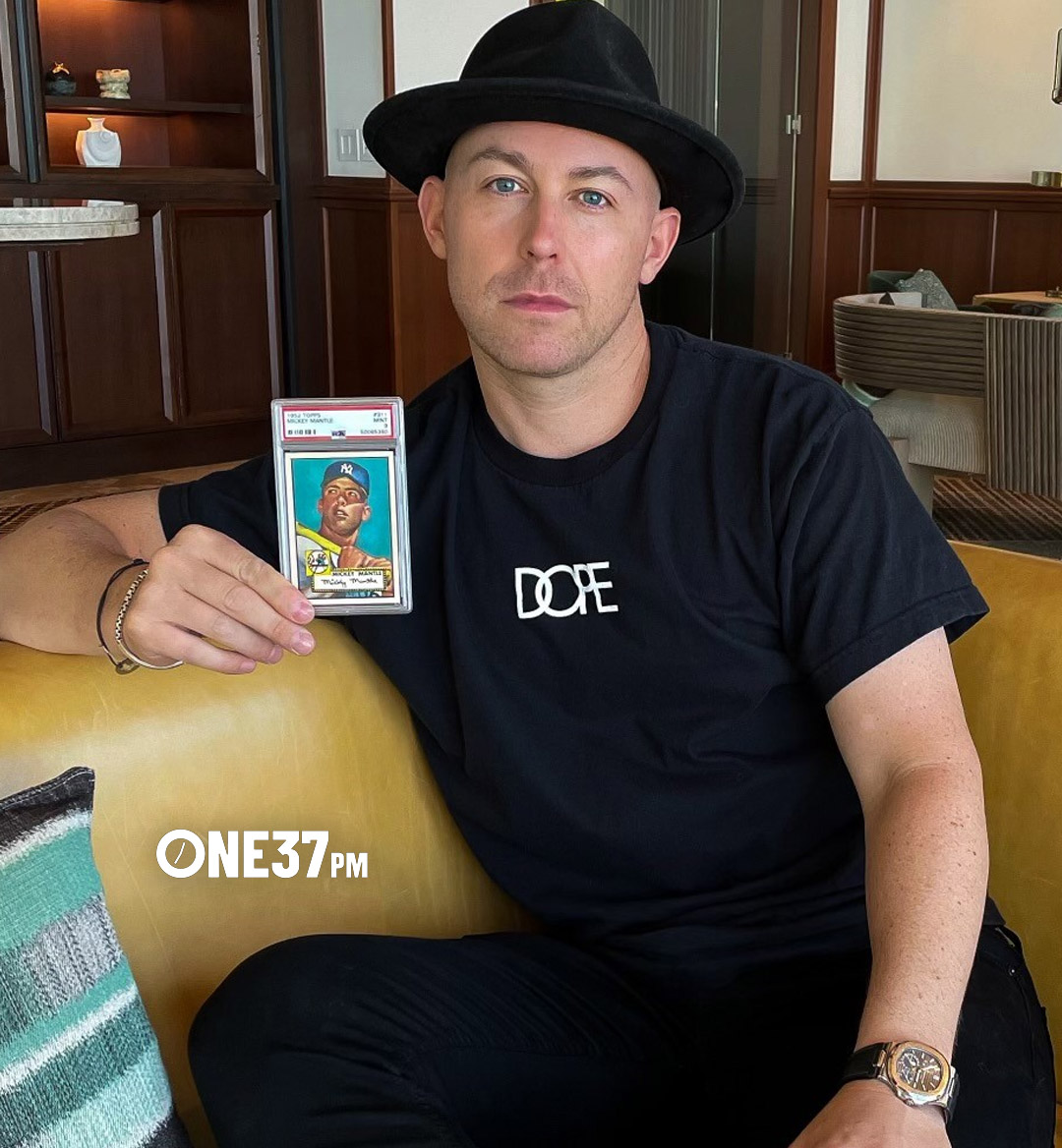 On Thursday, January 14th, another record was shattered in the sports card hobby, as PWCC Marketplace announced the private sale of one of the six 1952 Mickey Mantle Topps rookie cards that are graded a PSA 9 on this planet, for a mind-blowing $5.2 million.

The card was previously sold in 2018 at Heritage Auctions for $2.88 million, which was owned by former NFL player Evan Mathis.

“Based on our research, this is the nicest looking 1952 Topps Mantle PSA 9 in existence,” said Jesse Craig, Director of Business Development at PWCC Marketplace, via media release.

The buyer, Rob Gough, an entrepreneur who is most well known for his Dope clothing and CBD line and his acting in high profile movies such as Billionaire Boys Club and The Forgiven, could not be more proud to own this iconic card.

“I've dreamt of owning a 1952 Topps Mickey Mantle since I was a kid collecting cards,” said Rob Gough. “It's the Mona Lisa of sports cards, and I’ve been searching for this high graded example talking to industry experts, dealers, auction houses, and friends.”

How Did This Purchase Go Down? 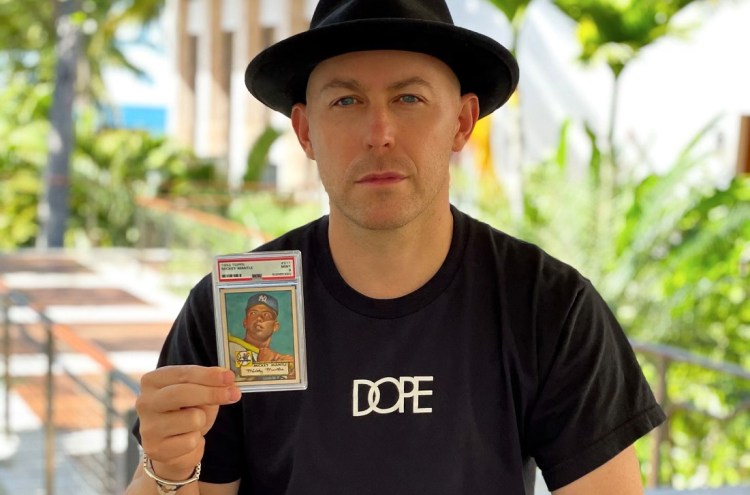 Gough credits fellow entrepreneur Gary Vaynerchuk and Dan Fleyshman, c0-owner of Hollywood card shop "Cards and Coffee," for rekindling his interest in the hobby he loved so much as a child.

"I caught the bug. I’m addicted to the hobby. Initially, when Gary and Dan got me in a Zoom [call] and said, 'Hey, we are collecting cards. This is fun' I remember thinking, 'This is crazy!' and I got off and was kinda curious, but thought, 'Have these guys lost their minds?' Once you get in, it’s so fun. That’s what I have to remember. This is a hobby. Yes, it’s a great diversified asset, but initially, I got in seeing these prices skyrocket daily. I just pushed hard, but I have slowed down and gotten more into the iconic assets."

Amongst the "iconic assets" Gough currently owns is a 1916 Sporting News Babe Ruth rookie, a 1917 Collins-McCarthy Joe Jackson, and several PSA 10 Michael Jordan rookie cards. In addition to his PSA 9 Mickey Mantle, he also owns a PSA 5 and PSA 8. He used to own a PSA 6 but recently sold it to DJ Steve Aoki.

However, his goal is to complete what he calls the "PSA rainbow" of 1952 Mickey Mantle rookie cards, which is owning one of them in every grade from 1-10. However, getting his hands on a PSA 10, currently valued at over $10 million, won't be so easy. There are only three of them on record, and none of them are currently for sale.

"They are so rare that they never become available." Said Gough. "Let’s say you have a billion dollars. Somebody offers $20 million. You can’t buy another one. It's very tough to get them out of hand." 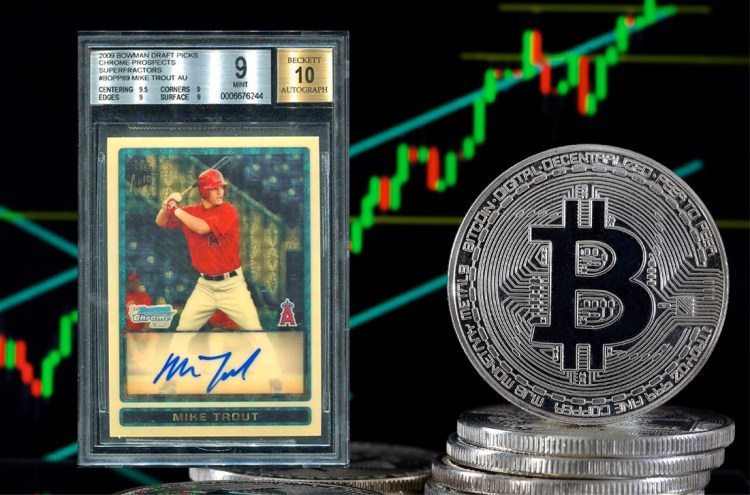 Many people look at the amount of money being spent on these high-end sports cards with extreme skepticism with so many things out there to invest in.

"I could have just bought Bitcoin, but this Mantle card has limited downside risk," said Gough. "Bitcoin is more like buying a Luka Doncic or Zion Williamson rookie card because of the volatility. Most people diversify. Young guys are an injury away from a bad price. They are very high risk. I'm more of a conservative player, more vintage focused. Maybe this Mantle won’t rise as much (percentage-wise) as a Zion Williamson card, but it has a smaller downside. If I bought the $3.9 million Mike Trout card, I'd be scared every night that something bad could happen. With Mickey, his legacy isn’t going away. That safety measure, especially infusing this kind of cash, is important. This transaction boosts this card, especially since I own a few lower graded versions. "

After researching other iconic cards that have boomed in value over the last calendar year, Gough couldn't understand why the hobby's most iconic card had not seen a similar increase. 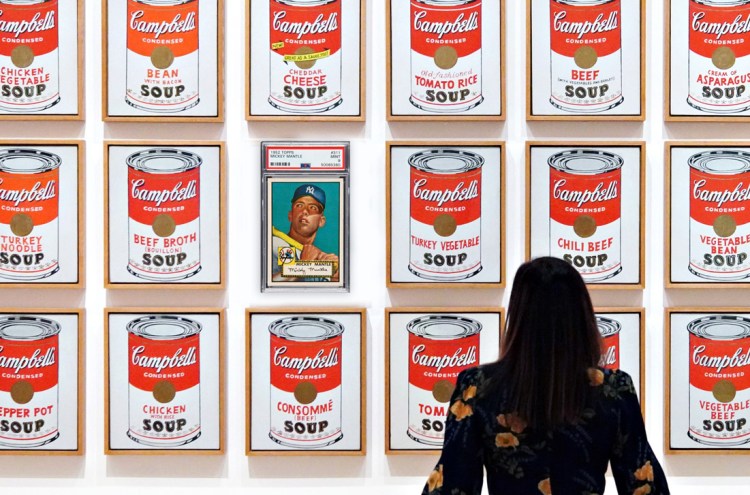 As previously mentioned, Gough's goal is to eventually own one of the three PSA 10s in existence.

You might be asking yourself how a $5.2 million card gets delivered or what you do with it once you have it in hand. According to Gough, the card was delivered via an armored vehicle and is currently being stored in a vault. However, he has big plans for it in the future, hoping to display it for all to see. He is trying to figure out, with his insurance company's help, the best way to do that.

"This is art. I collect art," said Gough. "This is definitely an art. Let’s say you take the same $5 million and put it into a house. There are a lot of houses you can buy for that money. To me, this is amazing because there are only six of them. That’s why I do consider this art. It’s got a great history of increasing in demand and value. How many paintings did Warhol do? There are only a certain amount. If you look at art, you spend the money on a piece of art, and it could be fake. This is safer because it’s graded. Ideally, I’d like to share it with the world. A lot of these assets just get locked away in wealthy people’s safes, and nobody sees it. I think it would be cool for other people to touch it or look at it."

When you look at this card in relation to a painting, maybe the value isn't so crazy. After all, 35 paintings are on the record of being sold for over $100 million each. However, to Rob, that isn't what it's all about.

"When I first got in, I was probably thinking, let’s just make a quick buck and get out, but you do it and catch the bug and realize how much fun it is," said Gough. "What a great hobby of people. I’m in a text chat with so many incredible people. It’s become addicting. We talk cards and the guys you are negotiating with along the way, initially, you enter the hobby for one reason, and it’s pivoted. I really just enjoy the hobby."