The 25 Most Expensive Soccer Cards Ever Sold 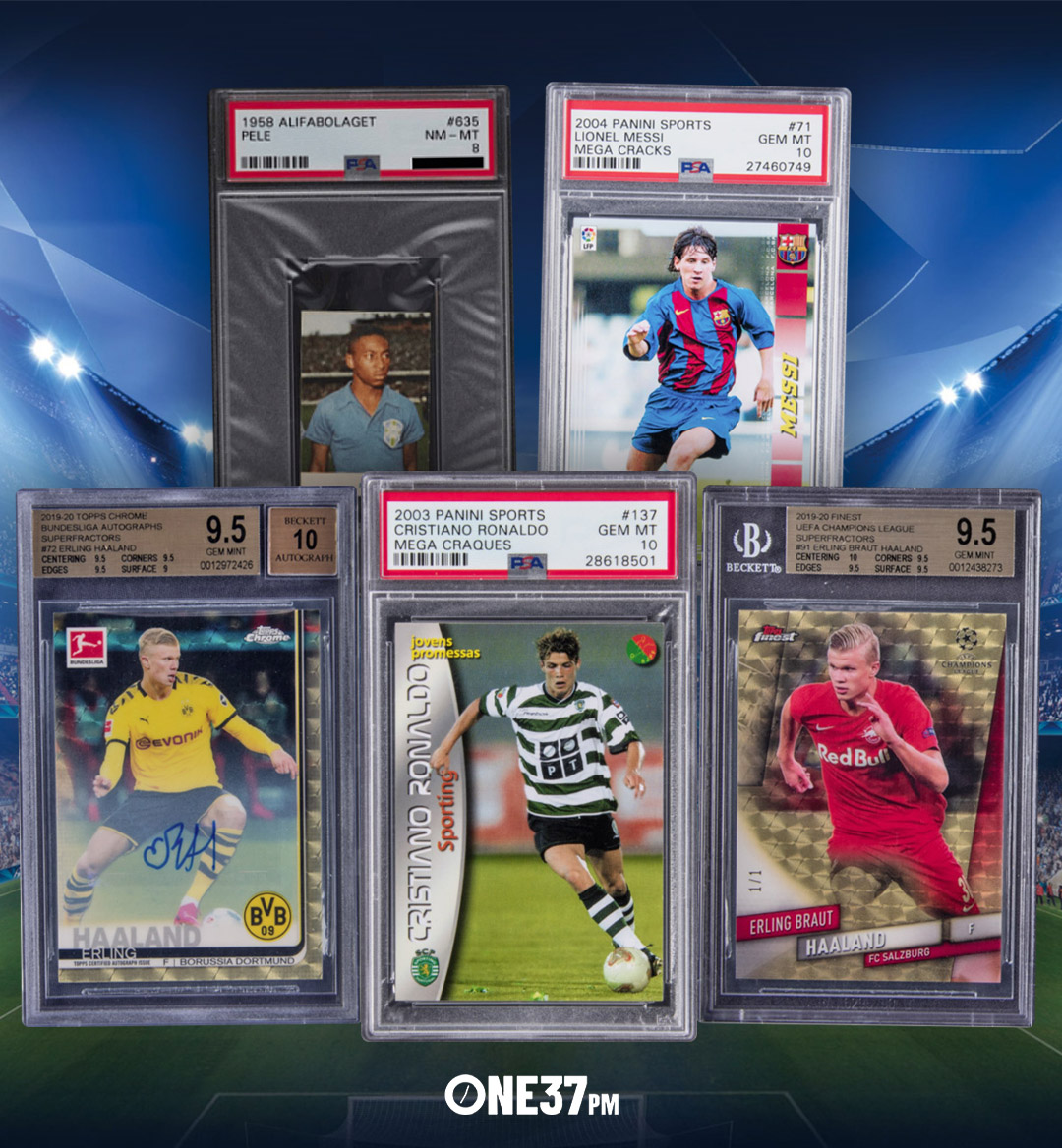 Because the sports card market is so robust in the United States, it’s no surprise that interest (and money) flows into sports like American Football, Basketball, and Baseball, the country’s 3 most popular sports.

It’s hard to ignore the potential of the soccer card market given the global dominance in popularity (Cristiano Ronaldo has the most followers on Instagram apart from the brand itself, with 361 million followers) and a maturing sports card market.

Below, we’ll look at the top 25 most expensive soccer cards ever sold. 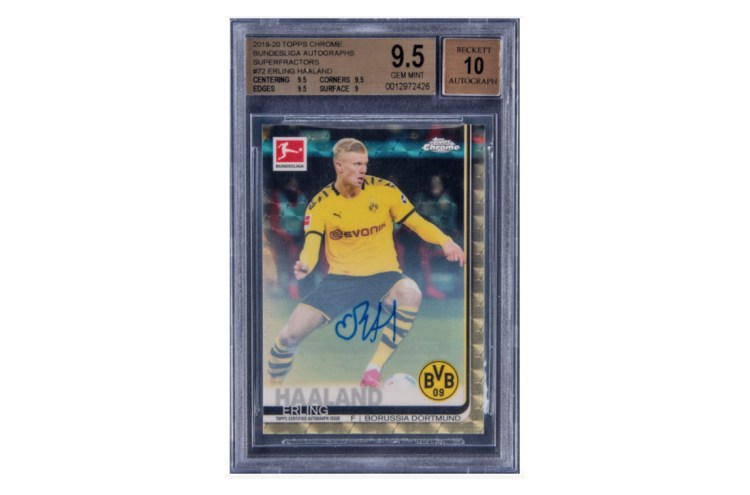 Erling Haaland is just 21 years old but his 2019 Topps Chrome Bundesliga Autographs Superfractor 1/1 BGS 9.5 holds the record for most expensive soccer trading card ever sold. In June of 2021, Goldin Auctions sold the card for $432,000:

An all-time record for any soccer card. pic.twitter.com/7eSZOdyT2A

Haaland is a 6'4” Norwegian striker for the German Bundesliga club Borrusia Dortmund and some believe he could become the best soccer player in the world. He’s known for his goal-scoring ability, once scoring a record 9 goals in a U20 World Cup game, and debuting with a hattrick for Borussia Dortmund. He’s scored 126 goals in his professional career so far and a few of his cards appear on this list.

Despite being young and unproven relative to superstars Messi and Ronaldo, the fast start to his professional career has produced some eye-popping records for his rookie cards. 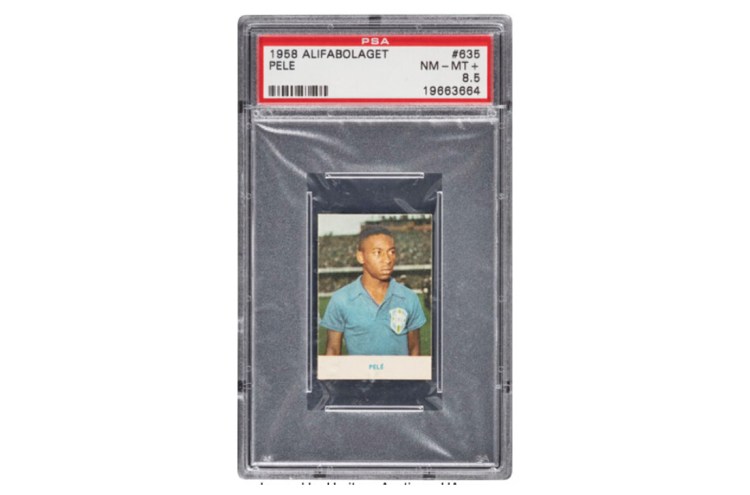 Pelé is a three-time World Cup winner and is considered by many to be the best soccer player in history. At just 17 years old, he scored three goals for Brazil in a semifinal victory over France during the 1958 World Cup.

Pelé was so dominant that the President of Brazil declared him a national treasure to prevent him from playing soccer in another country.

He still holds 7 records that have yet to be broken, including being the youngest world cup winner, Brazil’s record goalscorer, and scoring the most hat-tricks in a career (92). Sports Illustrated ranked Pelé as the 2nd best soccer player in history.

Just 4 copies of Pelé’s 1958 Alifabolgaet rookie card have been graded a PSA 8.5, with only 6 copies graded higher (all PSA 9). 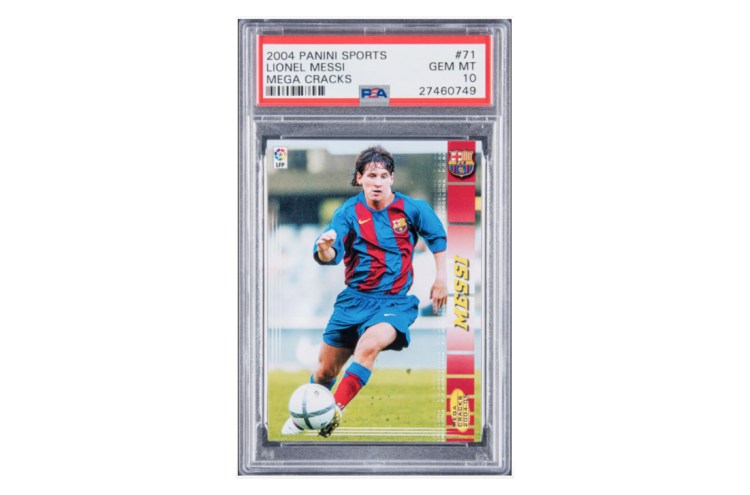 Sports Illustrated ranked Lionel Messi the 3rd best soccer player of all time and was named the FIFA world player of the year 5 times during his 19-year career.

He’s played the majority of his career for FC Barcelona and the Argentinian national team but arrived in Paris this past August to finalize a move to PSG (Paris St.-Germain).

Messi holds the Guinness World Record for most goals in a calendar year (91), set an all-time record of scoring in 21 consecutive games, and has been part of 4 Champions League Title-winning teams.

This past June, Goldin Auctions sold a copy of the population 2020 Mega Cracks rookie card for a whopping $336,000. 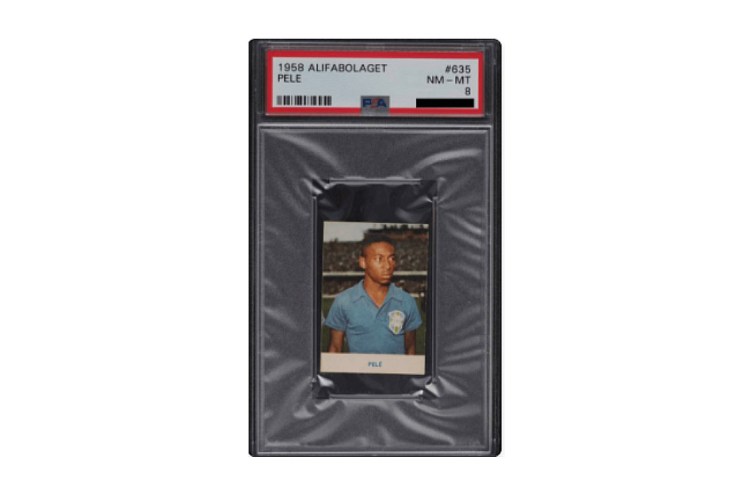 There are just 72 total graded copies of the Pelé Alifabolaget base rookie card and just 5 copies received a PSA 8 grade (with 10 copies graded higher). A copy of the card in a PSA 8 grade was sold in March 2021 on eBay via PWCC Marketplace for $340,100, a record sale for any soccer card sale on eBay at the time:

New record for a soccer card sold on @ebay. This Pele rookie was sold for $340,100 on @PWCCmarketplace yesterday. pic.twitter.com/NqZNvpwr7p 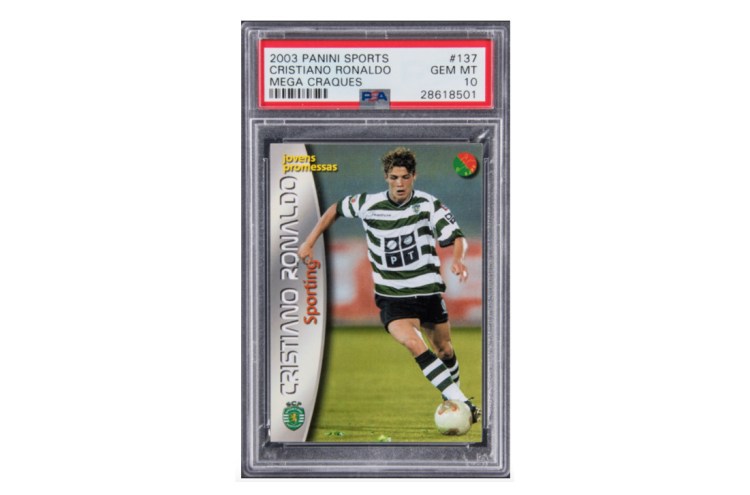 Cristiano Ronaldo was ranked the 15th best soccer player of all time by Sports Illustrated and is widely recognized as the 2nd best player in his generation (behind Lionel Messi). In addition to his on-field accomplishments, Ronaldo is globally famous, indicated by his Instagram account with 362 million followers. Ronaldo is 36 years old and currently plays for Manchester United as a forward.

Ronaldo has accomplished a lot in his career, including winning the Men’s Ballon d’Or award (an award voted on by soccer journalists and given to the player who performed the best in the world over a 12-month period) 5 times. He also holds the record for the most goals and assists in the UEFA Champions League, most goals in the UEFA European Championship, and the Fifa World Cup. 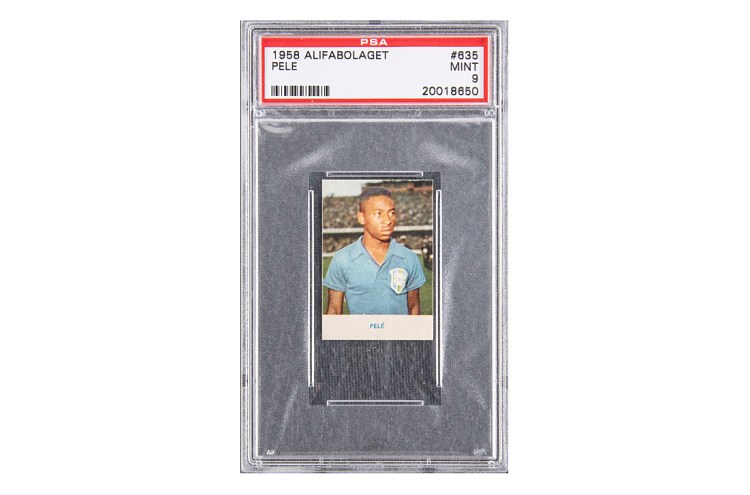 With just 6 copies of this card in a PSA 9 grade (none graded higher), Pelé’s rookie card commanded significant value even before the 2021 sports card boom. Goldin Auctions sold a copy of this card in October 2020 for $288,000. Given the fact that a PSA 8.5 of this card sold for $372,000 in May of this year, it’s more than likely that if one of the very rare PSA 9 copies hit the market again, it might set a record for the most expensive soccer card ever sold. 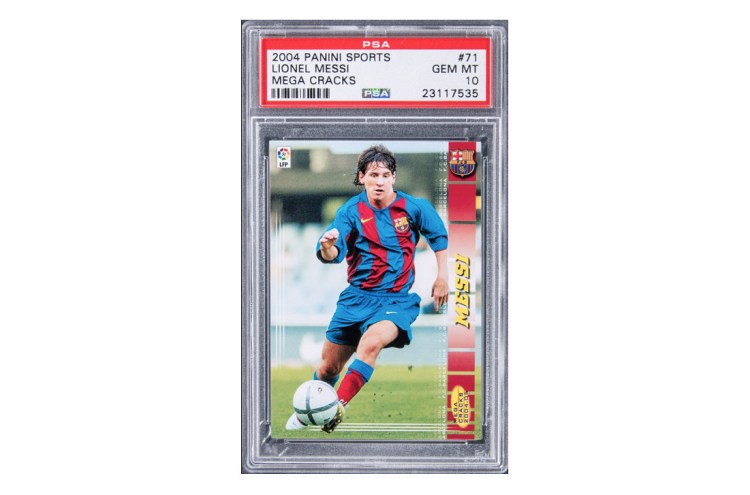 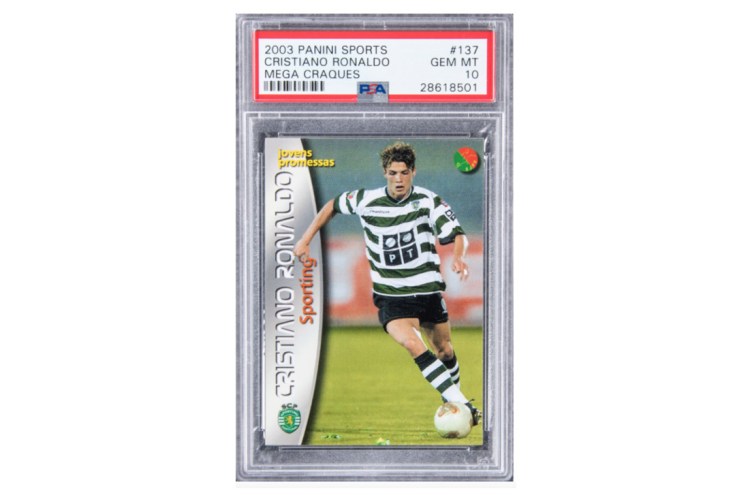 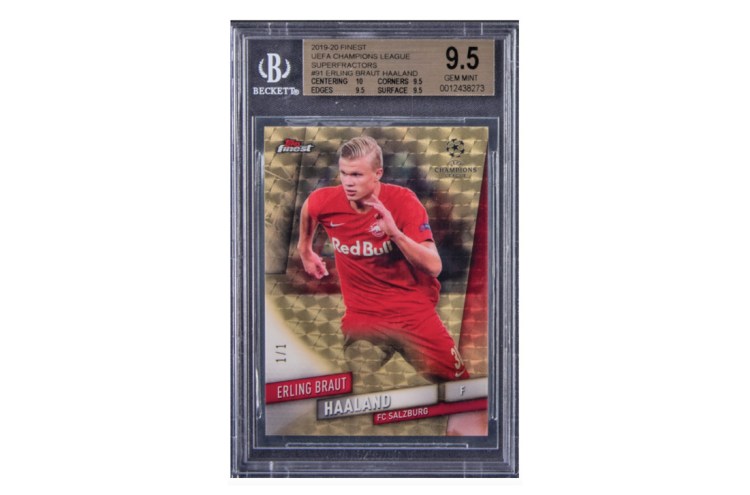 Despite being the youngest player featured in this list, Erling Haaland claims 2 spots in the top 10 most expensive soccer cards ever sold. His 2019 Topps Chrome UEFA Champions League 1 of 1 Superfractor in a BGS 9.5 grade was sold by Goldin Auctions in September 2021 for $210,330. He’s still just 21 years old but has caught the soccer card market by storm. 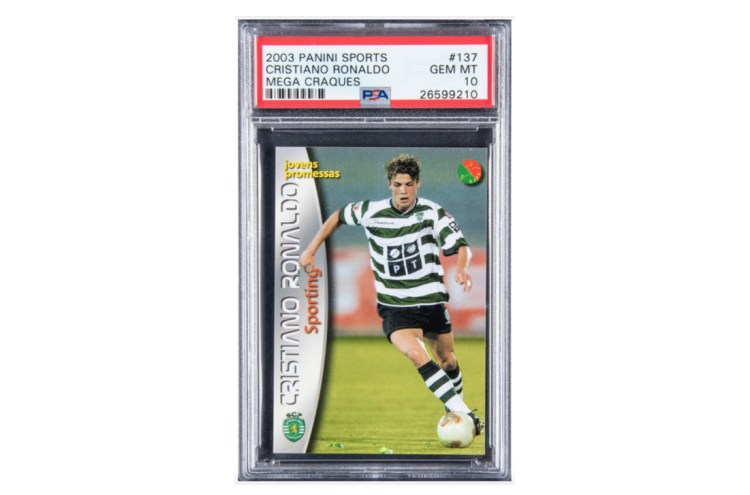 A second PSA 10 copy of Ronaldo’s 2003 Mega Craques rookie card was sold by Goldin Auctions in April 2021 but sold for about 11% less than its counterpart. Given the fact that copies of this card sold for just a few thousand dollars two years earlier, it’s not surprising that multiple copies of the card have sold in 2021. Despite an increase in the available supply of these cards on the market, no sale dropped below $204,000. 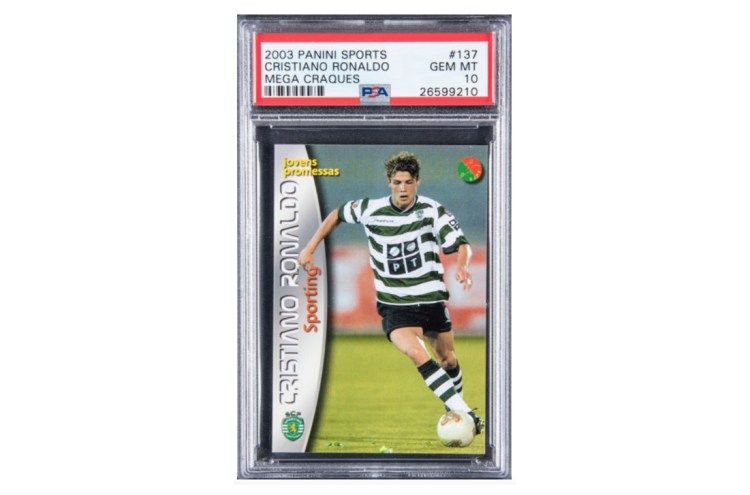 Just 1 month after 2 copies of this card were sold for record prices (at the time) a 3rd copy hit the market and sold via Goldin Auctions for $204,000 in May 2021. Despite being repetitive, this sale is included on this list for a reason (apart from qualifying given its sale price). Even rare cards in a growing market experience price fluctuations — it’s clear that owners of this card were incentivized to send their copy off to auction given the high returns relative to their original purchase price. However, prices decreased (hitting a low of $156,000 in August 2021) as the card has been sold six times in 2021, compared to only two sales in 2020, and four sales in 2019. 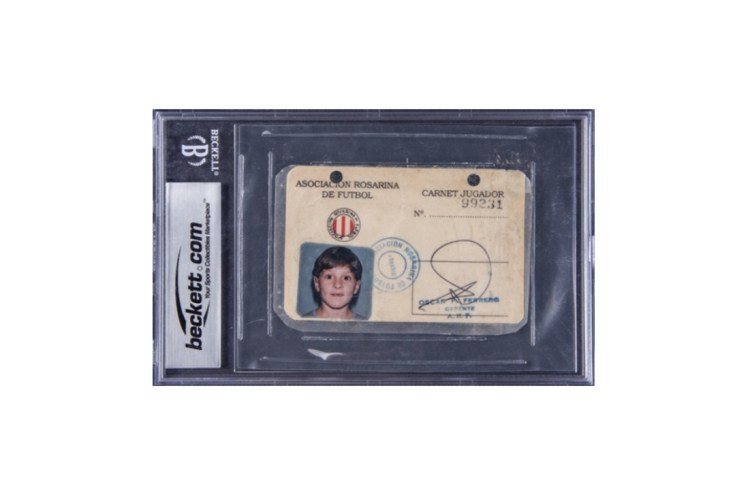 While it is not an officially licensed rookie card, Messi’s Newell’s Old Boys signed membership card may be the earliest alternative rookie card in existence for Lionel Messi, including his first autograph. It’s estimated that he was about 8 years old when the card was issued or signed. In October 2021 Goldin Auctions sold the card for $185,730. 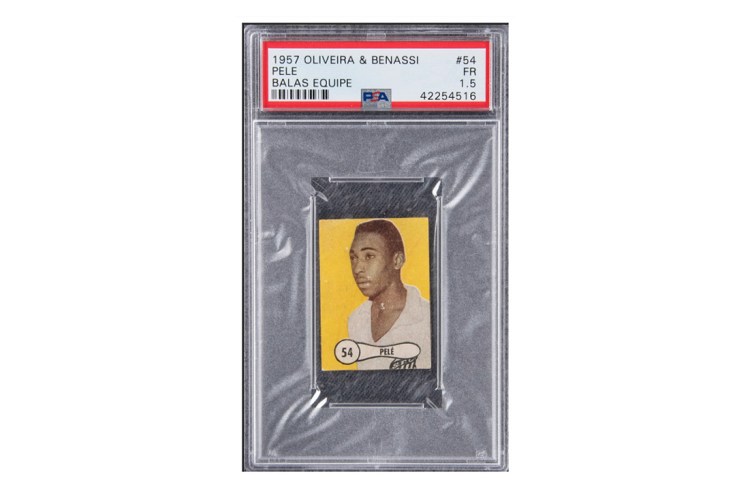 According to PSA, there is just 1 copy of this card in graded condition. This is known as a sticker card and depicts Pelé when he was just 16-years-old when he made his debut for the Brazilian national team. Goldin Auctions sold the only graded copy of this card in December of 2020 for $182,400. 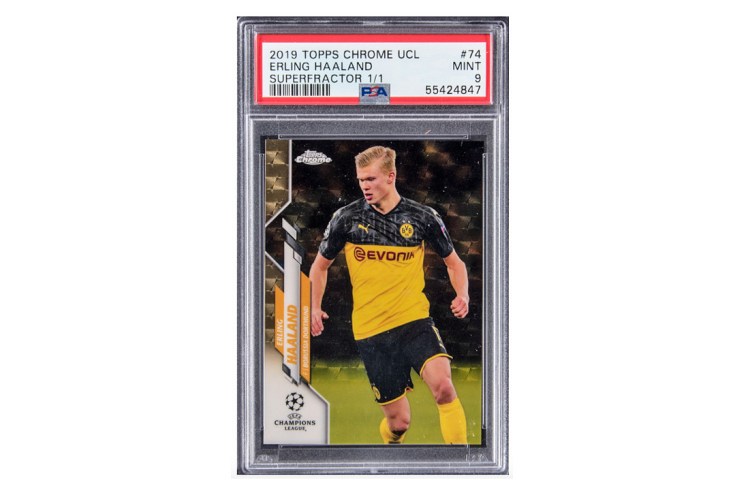 This is the 3rd Erling Haaland Super Fractor 1/1 on this list and it comes from the Topps Chrome UCL set. Graded as a PSA 9, Goldin Auctions sold the card for $181,200 in August 2021. One benefit of Haaland’s age is that his cards have been produced in the modern era and therefore scarcity is built into 1 of 1 card like the one above. Players like Messi, Ronaldo, and Pelé (apart from his sticker rookie, which had multiple copies issued but only 1 made it to grading) do not have 1 of 1 rookie card examples due to the market not producing them a the time. 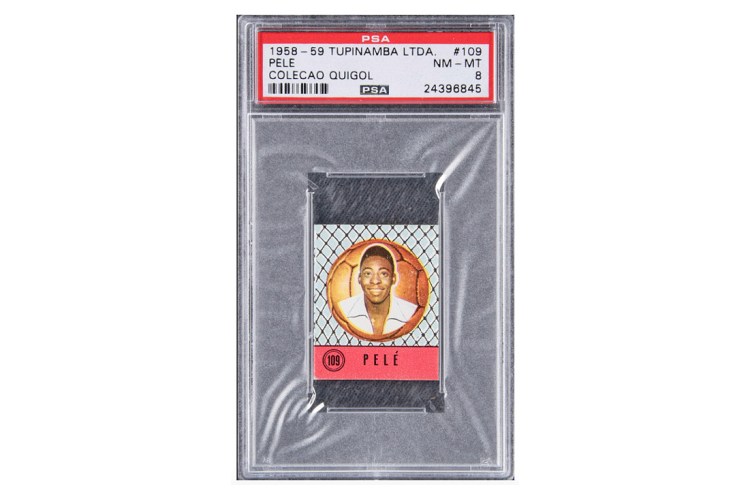 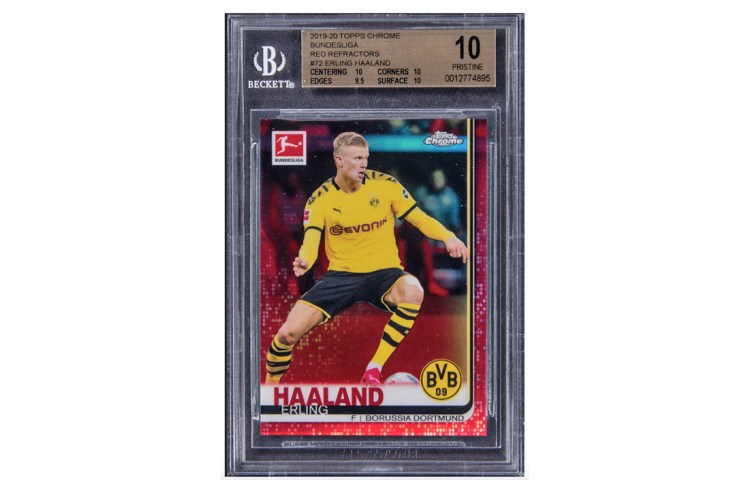 Erling Haaland’s 2019 Topps Chrome Bundesliga Red Refractor /10 is a population 1 in a BGS 10 grade. Goldin Auctions sold this card for $170,400 in August of this year. Haaland’s rare rookie cards have sold well throughout the entirety of 2021 and he has a lot to execute on the field to live up to these prices. 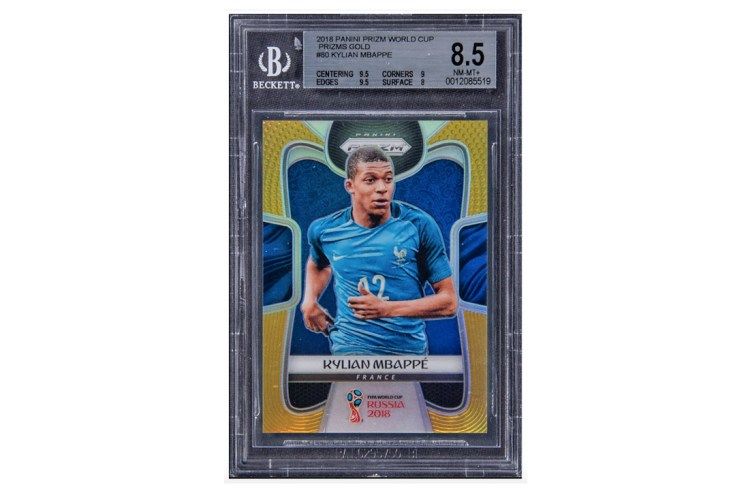 Kylian Mbappe was the hobby darling as the soccer card market started to emerge in late 2020. Mbappe is just 22 years old but has already won a World Cup, becoming just the second teenager (behind Pelé) to score a goal in the World Cup finals. He’s led Ligue 1 three times in goal scoring, is a 2-time French League Cup Winner, 3-time French Cup Winner, and 4-time French Champion while playing for Paris Saint-Germain and AC Monaco. Goldin Auctions sold a BGS 8.5 graded Gold Prizm out of 10 copies in October 2021 for $161,130. Mbappe is the second most popular modern player (behind Haaland) given his record card sales in 2020 and 2021. 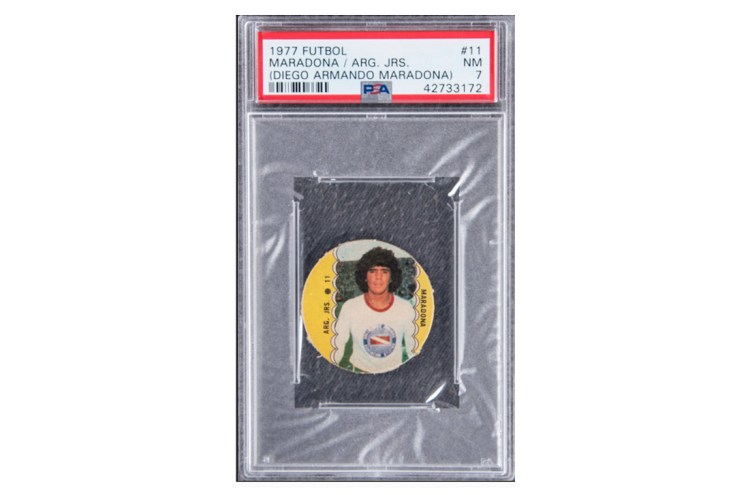 Sports Illustrated crowned Diego Maradona the best soccer player in history. Maradona played professional soccer for 21 years, won 1 World Cup, was awarded the Fifa World Cup Golden Ball for most outstanding finals performance in 1986 and scored what is often referred to as the greatest soccer goal in the history of the sport (even though it was technically an illegal shot).

The 1977 Futbol Maradona disc card is recognized as one of his earliest cards and thus is considered a rookie card. A total of just 47 of these cards have been graded by PSA with just 6 copies receiving a grade of 7 and only 2 are graded higher (PSA 8). 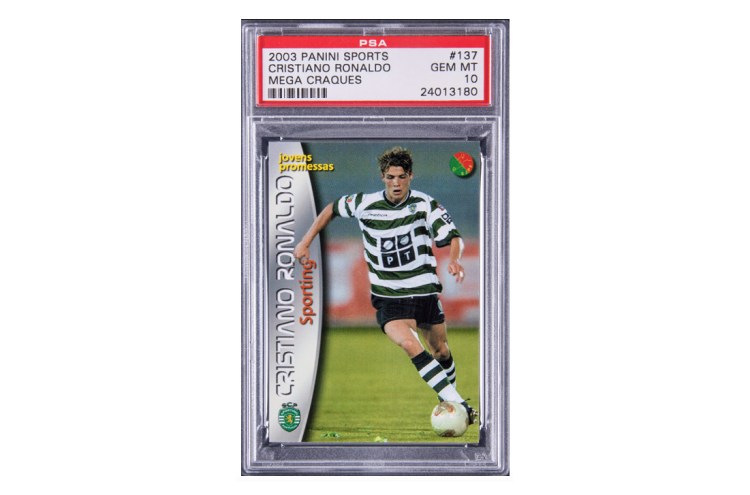 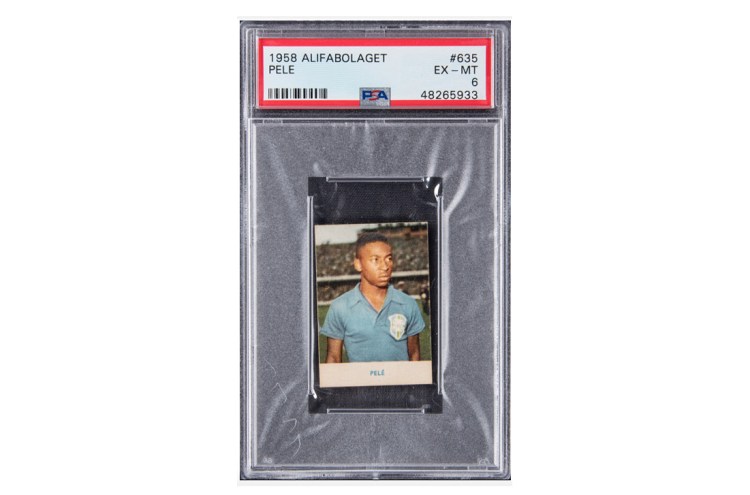 There are just 5 copies of Pelé’s Alifabolaget rookie card in a PSA 6 grade with only 24 graded higher. Goldin Auctions sold a PSA 6 copy of this card for $148,830 in October 2021. Pelé was such a dominant player during his career and given the low supply of his rookie cards, even lower grades command significant value in the market. 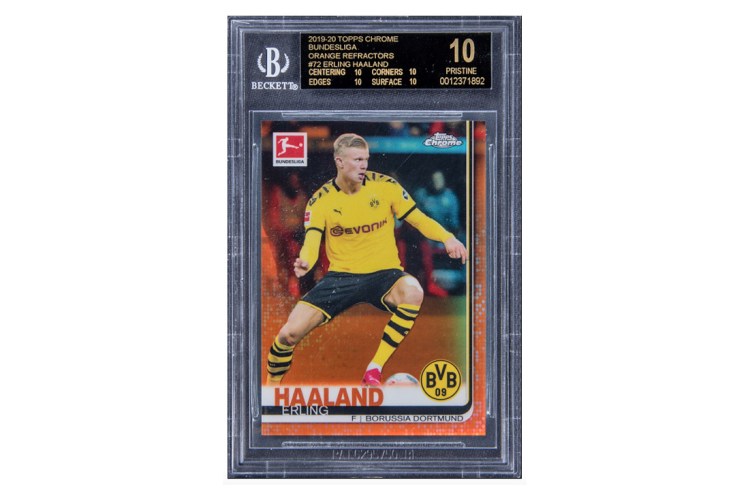 Erling Haaland’s 2019 Topps Chrome Bundesliga Orange Refractor has 25 copies, but only 1 has received a BGS 10 Pristine Black label grade putting it in a supply category with 1/1 Super Fractors. Goldin Auctions sold this card in June 2021 for $146,400. 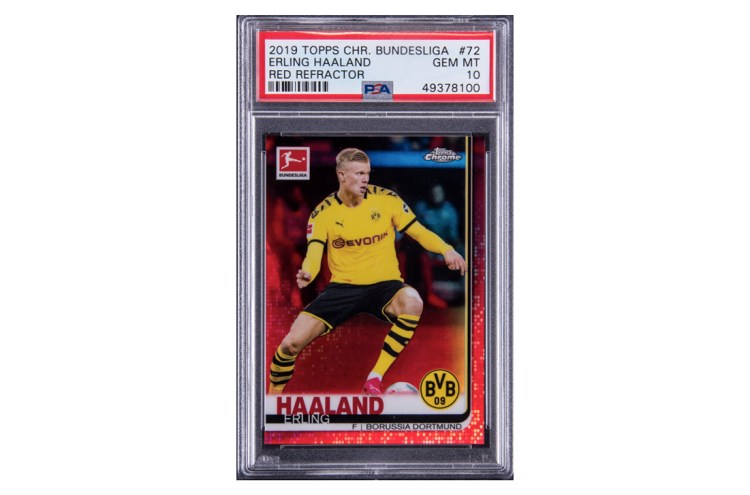 The BGS 10 version of Haaland’s Red Refractor /10 sold for $170,400 via Goldin Auctions, and a PSA 10 copy sold in April 2021 also via Goldin Auctions, for $145,200. A 17% difference in value. Grades are a form of scarcity and even if the cards look to be in similar condition, the market has demonstrated that premiums are given to those cards that receive a higher grade. In this case, it was the difference of $25,200. 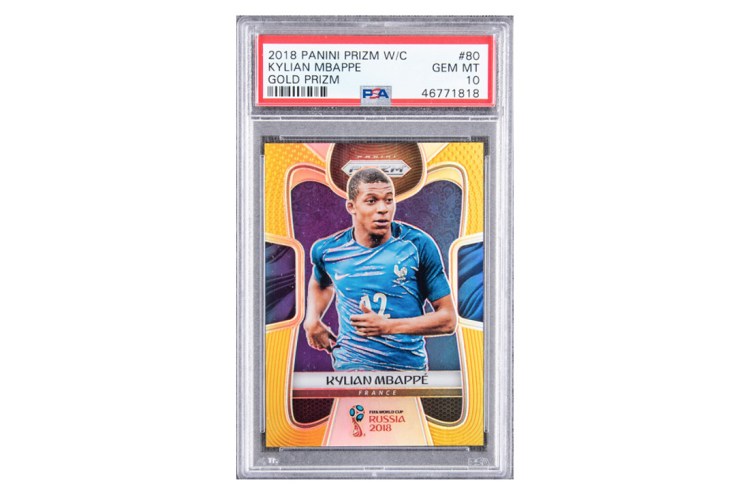 There is just 1 copy of Mbappe’s Gold Prizm graded by PSA and it received a 10. This card is effectively a 1 of 1 copy and Goldin Auctions sold the card for $121,400 in August 2020. A little over a year later, this same card in a BGS 8.5 grade sold for $161,130, a 32% increase over this sale (and in a lower grade). Haaland exploded into the market, but Mbappe’s Gold Prizm has appreciated in the past year and he’s still a young, accomplished player. 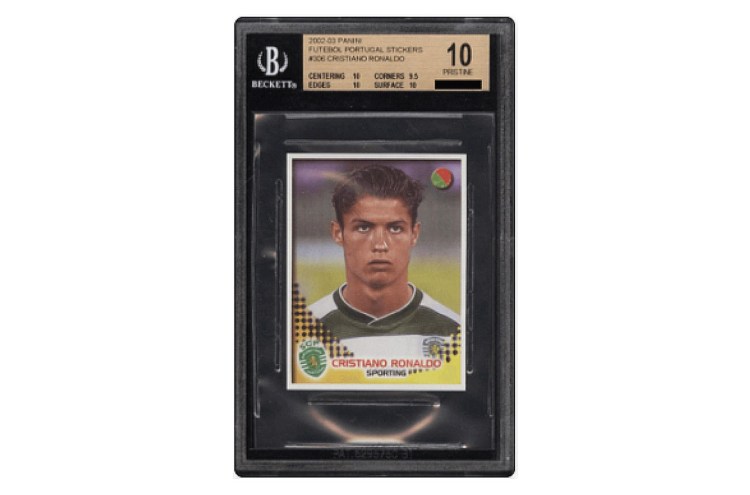 In May of 2021, a population of 3 Ronaldo World Cup Sticker rookie card in a BGS 10 grade sold for $120,000 via PWCC auctions. Unlike his traditional rookie card, this is a sticker card (it is an actual sticker). These types of cards are commonly distributed at World Cups so that collectors can stick into notebooks to collect all the participating players for each team in that year. However, Ronaldo did not play in the 2002 World Cup. 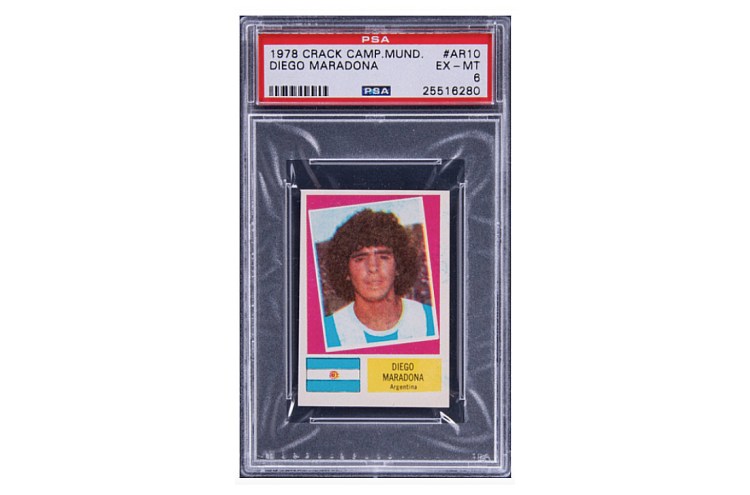 This second-year Maradona card has a total supply of 31 cards graded by PSA with just 1 receiving a PSA 7 (none graded higher). Goldin Auctions sold that copy for $110,400 in June 2021. Maradona is known as one of, if not the best soccer player of all time, and cards from early in his career are low in supply, contributing to the six-figure price earned from a non-rookie card.