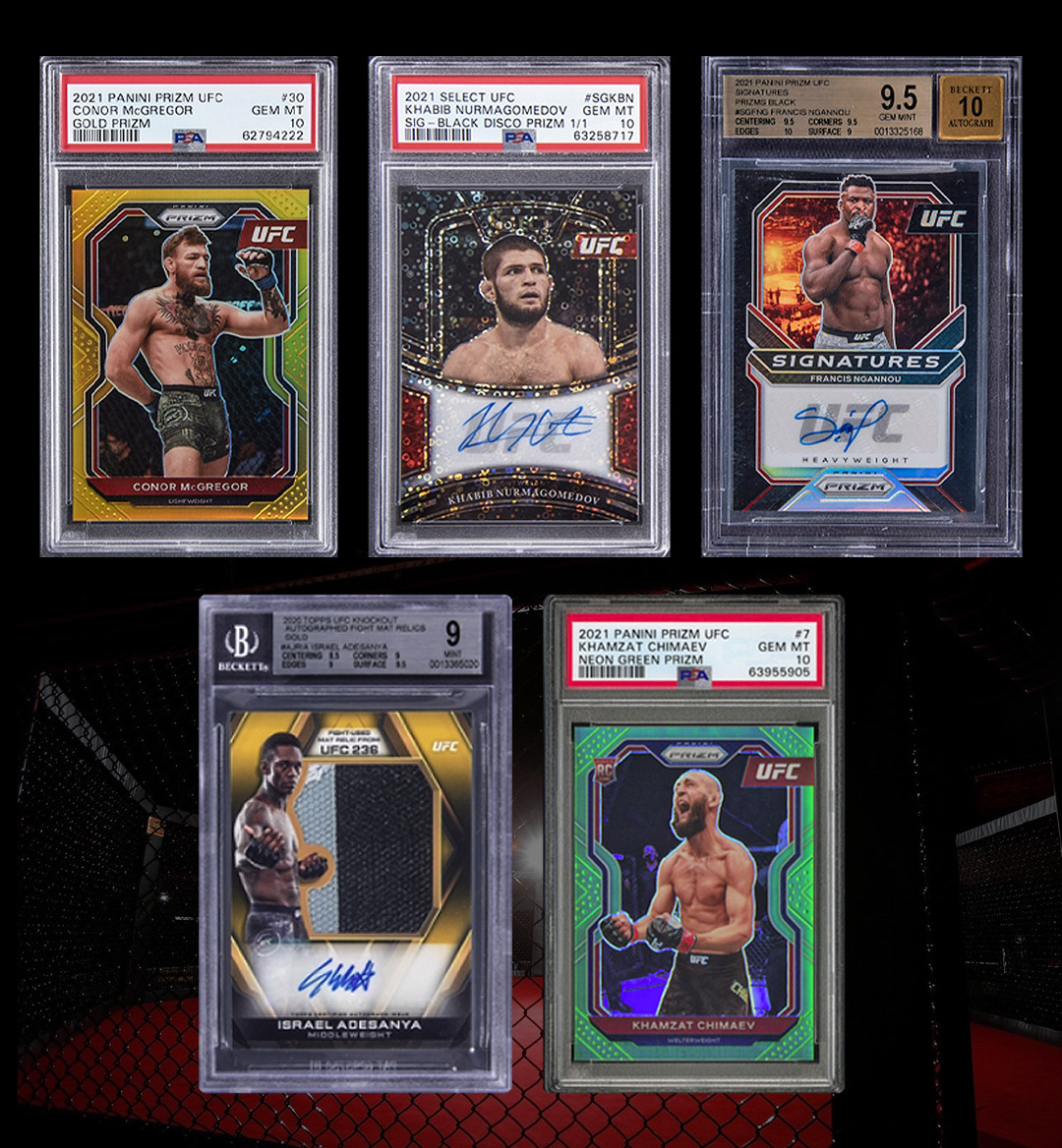 Televised mixed martial arts (MMA) matches have been growing in popularity over the last two decades with stars like Conor McGregor becoming household names. The UFC (Ultimate Fighting Championship) has hosted multiple matches with pay-per-view buyers in the millions and its Instagram account has 10 million more followers than the NFL.

UFC isn’t generally considered amongst the “big four” sports in the US (Baseball, Basketball, Football, Hockey), but the audience is growing.

We’re going to look at the top 20 most valuable UFC trading cards, which have also seen growth with the popularity of the sport. 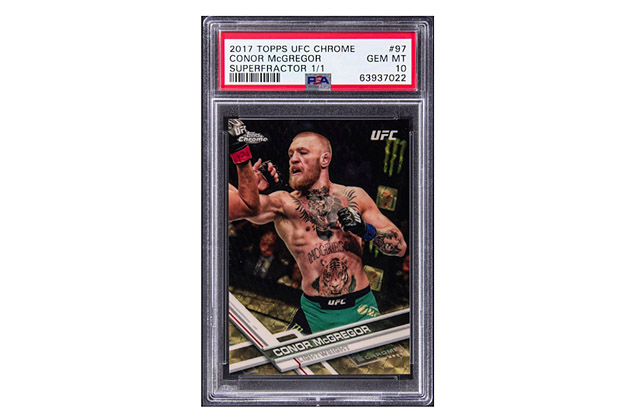 McGregor is the most famous UFC fighter with over 40 million followers on social media and he’s been the main event in the top-5 most pay-per-viewed fights all-time for the UFC.

The most popular players of a sport tend to dominate the most valuable trading card sales lists, so this is the first of many McGregor cards that have set records. 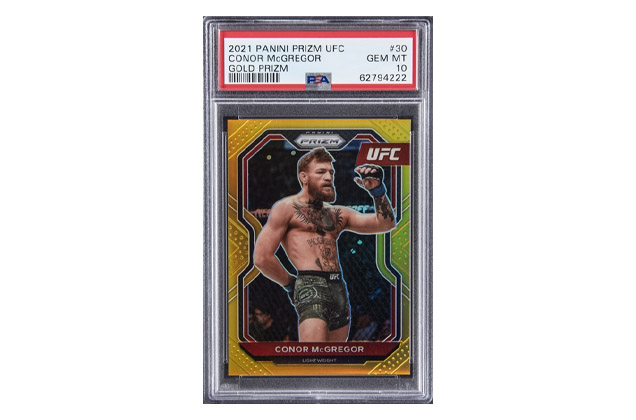 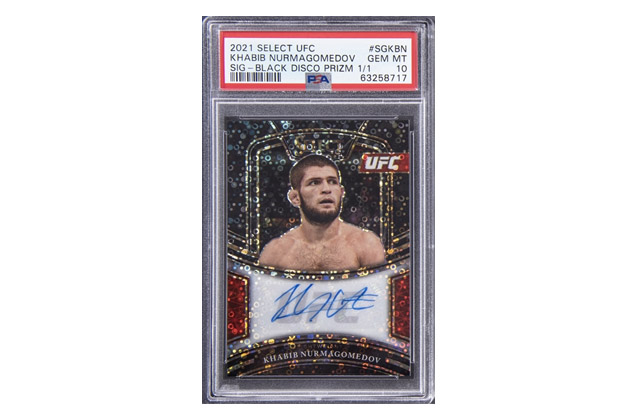 Khabib went undefeated in his UFC career and is one of the most popular players in the sport.

He fought and defeated Conor McGregor in October 2018 in a record pay-per-view event for the UFC. McGregor may be the most known UFC fighter but Khabib is not far behind despite being retired. 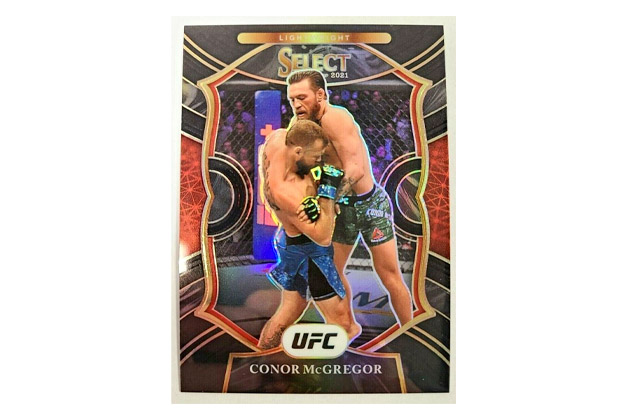 The fourth-highest selling UFC card is a 1/1 Select Prizm Black featuring Conor McGregor that was sold on eBay for $22,212 on December 19th, 2021.

The card was in ungraded condition when it was sold and the sale was verified by using 130point.com.

McGregor’s rare cards have led the charge in the development of the UFC card market. He has a strong personality, has attracted a large fanbase, and got himself even more famous when he fought Floyd Mayweather Jr. in 2017. 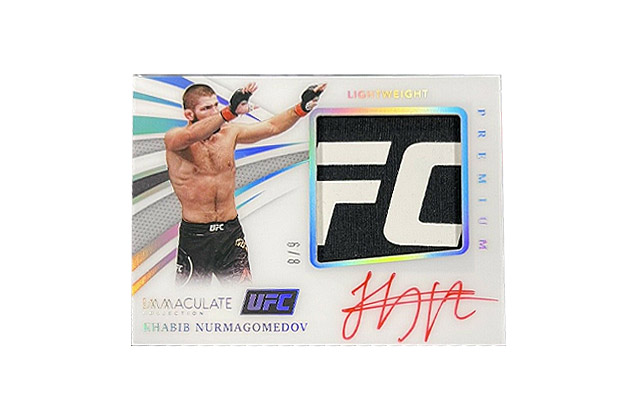 The fifth most expensive UFC card sold is a Khabib Nurmagomedov Immaculate Patch Autograph numbered to just 8 copies. The card features a match-worn patch with a red on-card autograph and was sold on eBay for $17,500.

Khabib is a 33-year-old Russian fighter and at the time of his retirement, was considered the top pound-for-pound UFC fighter of all time.

He fought Conor McGregor in the largest UFC pay-per-view fight of all-time with 2.4 million PPV buys. Khabib won the fight in round 4 by submission. 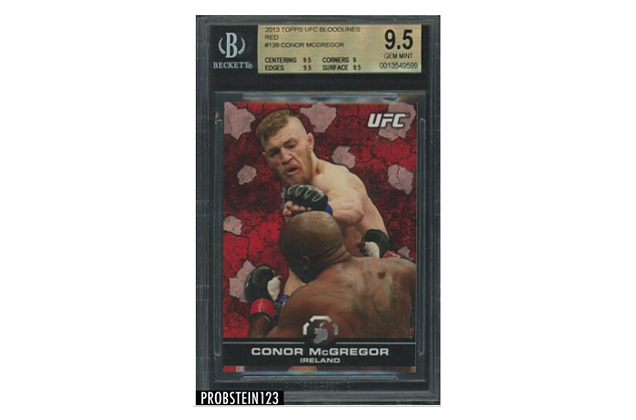 Conor McGregor’s 2013 Topps UFC Bloodline Red numbered to 8 copies with a grade of BGS 9.5 sold via eBay auction in November for $13,669.

McGregor made his UFC debut in 2013 and this set is considered to be McGregor’s rookie set. 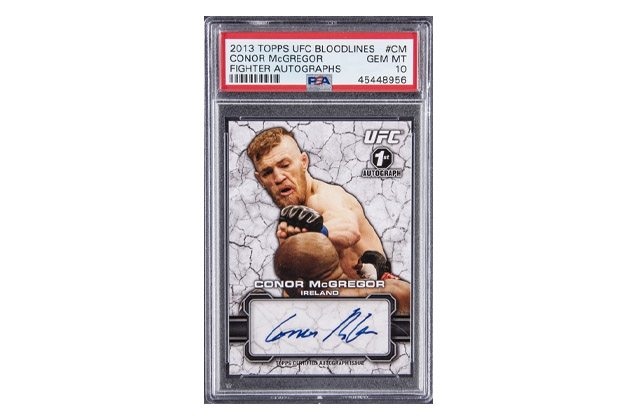 As the market for UFC cards has grown, it wouldn’t be surprising to see this card set a new record when it comes up for sale again. 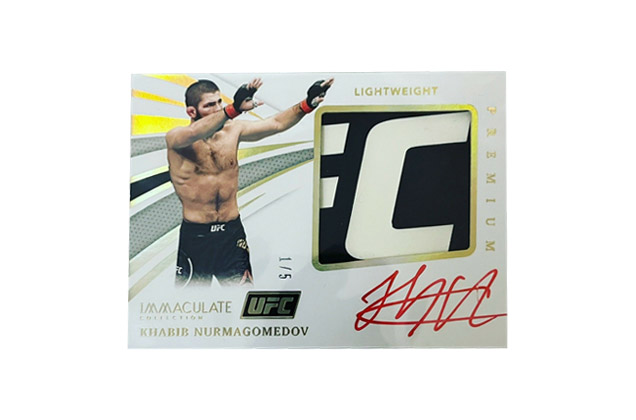 Khabib Nurmagomedov isn’t the face of the UFC like McGregor, but he’s a popular fighter with over 32 million Instagram followers and his recent card sales show it. His Immaculate Premium Patch Auto features a match-worn patch and red autograph sold ungraded on eBay for $11,500. 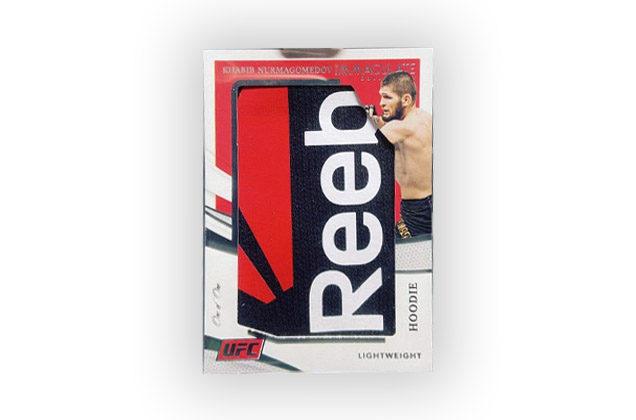 Another Khabib Immaculate sold on eBay in ungraded condition for a five-figure sum at $10,507 and this time it was for a 1/1 patch card. 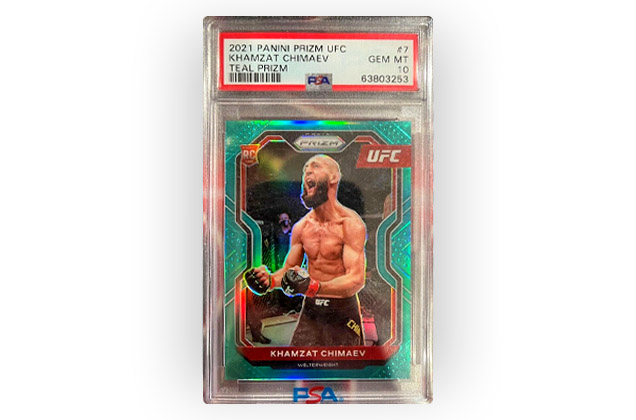 Khamzat Chimaev has 3 million Instagram followers and is currently undefeated in the UFC. Chimaev is a talented freestyle wrestler who made his first UFC debut in July 2020, winning the fight in the second round by submission. 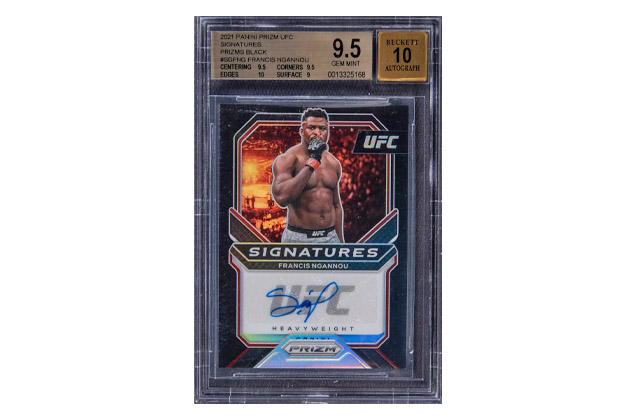 Francis Ngannou has an incredible backstory. Ngannou is the current UFC heavyweight champion and got there by rising through poverty, ignoring offers to join gangs, focusing on boxing, and enduring homelessness. Ngannou is originally from Cameroon and after working in the sand mines, he knew he had to change his life.

He focused on fighting and in order to achieve his dream, he crossed borders illegally through the Sahara desert, had to face jail time, and ended up homeless in Paris. Ngannou worked at a homeless shelter and was fortunate that the director of the foundation introduced him to someone who ran a boxing training center in Paris.

A few years later, he ended up as the heavyweight champion in the UFC. 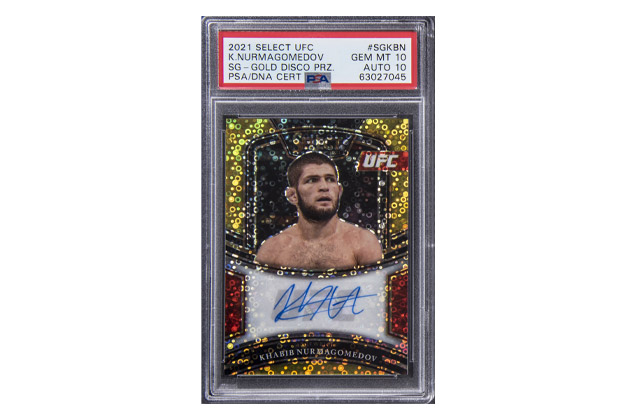 Khabib went undefeated in his UFC career at 29–0 and multiple of his trading cards across different sets have commanded significant value on the secondary market. 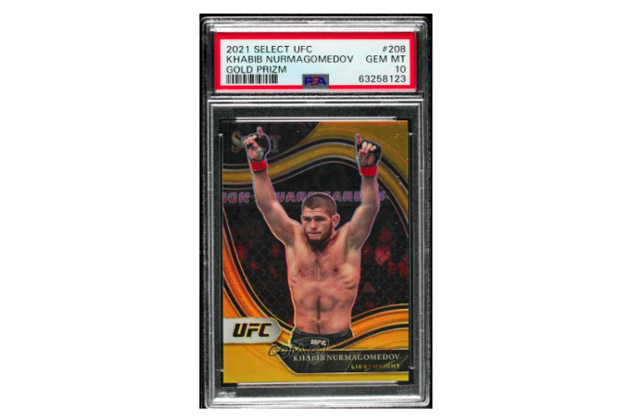 Khabib Nurmagomedov’s 2021 Select UFC Octagonside Gold Prizm (numbered to 10 copies) in a PSA 10 sold for $9,600 on eBay, yet another nearly five-figure sale for Khabib. 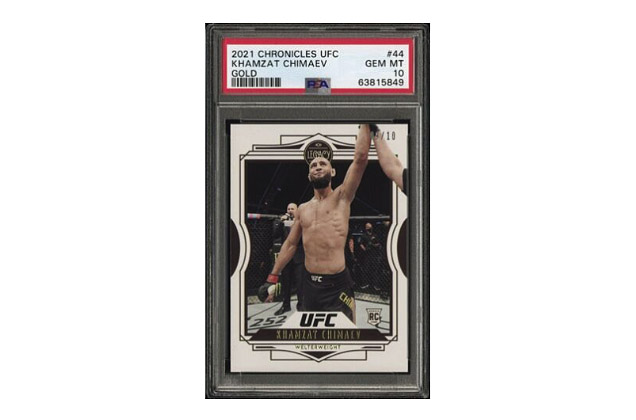 Khamzat Chimaev is a rising star in the UFC and his 2021 UFC Chronicles Gold numbered to 10 copies sold on eBay via auction in December 2021 for $9,100.

The fighter had some trouble with COVID and was forced to cancel fights but was finally able to return in October 2021 after missing a year of action. 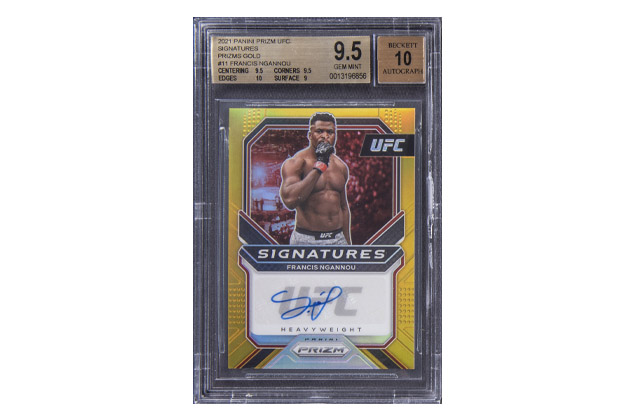 Francis Ngannou’s 2021 UFC Prizm Signatures Gold Auto (numbered to 10 copies) sold for $8,400 at Goldin Co. Ngannou last fought on 1/22, beating Ciryl Gane, and in that fight, he demonstrated a continued evolution of his talent.

Ngannou is already 35 years old but has shown that he can get better as a fighter and still has a long career ahead of him. 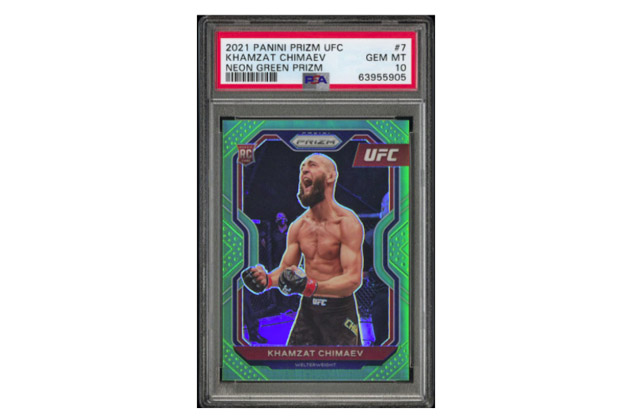 Chimaev is a rising star in the UFC and has an “it” factor that could make him a superstar. 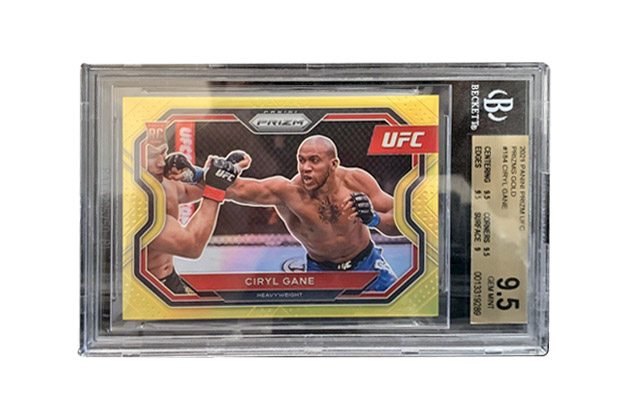 Gane was the interim Heavyweight Champion of the UFC but lost to Francis Ngannou in the heavyweight championship in January of this year. It is Gane’s only loss in his UFC career. 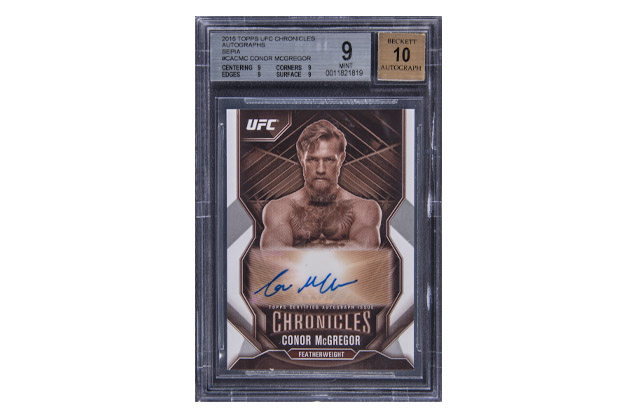 McGregor’s market didn’t pick up full-steam until the end of 2021 and early 2022 with his latest record sale it would be interesting to see what this 1/1 McGregor would fetch if it were auctioned off today. 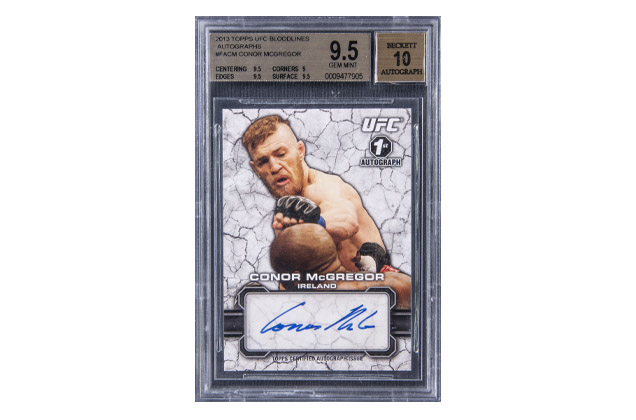 In May, Goldin Co. sold this 2013 Topps UFC Bloodlines Conor McGregor autographed rookie card in a BGS 9.5 grade for $6,000. This is McGregor’s first auto and came out the year he debuted in the UFC.

If the UFC card market continues to develop and expand, keep an eye on the 2013 Topps UFC Bloodlines McGregor rookie cards. 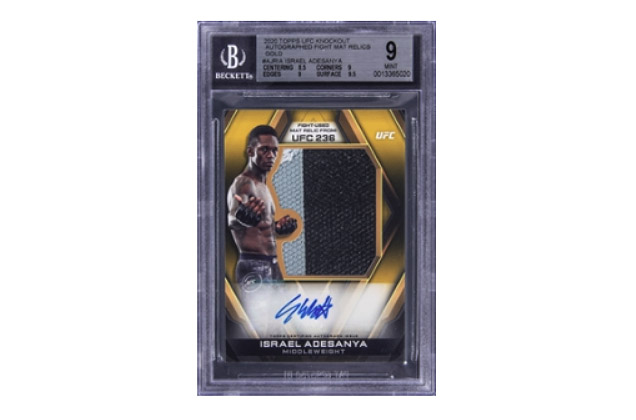 Israel Adesanya is a 32-year old MMA middleweight fighter who has gone 21–1 in his UFC career with an upcoming main event match on February 12th.

Adesanya was ranked the 3rd best UFC pound-for-pound fighter and is considered to be one of the best strikers in the UFC.