From the far-fetched to the downright bizarre, here’s how fans think ‘Endgame’ will play out 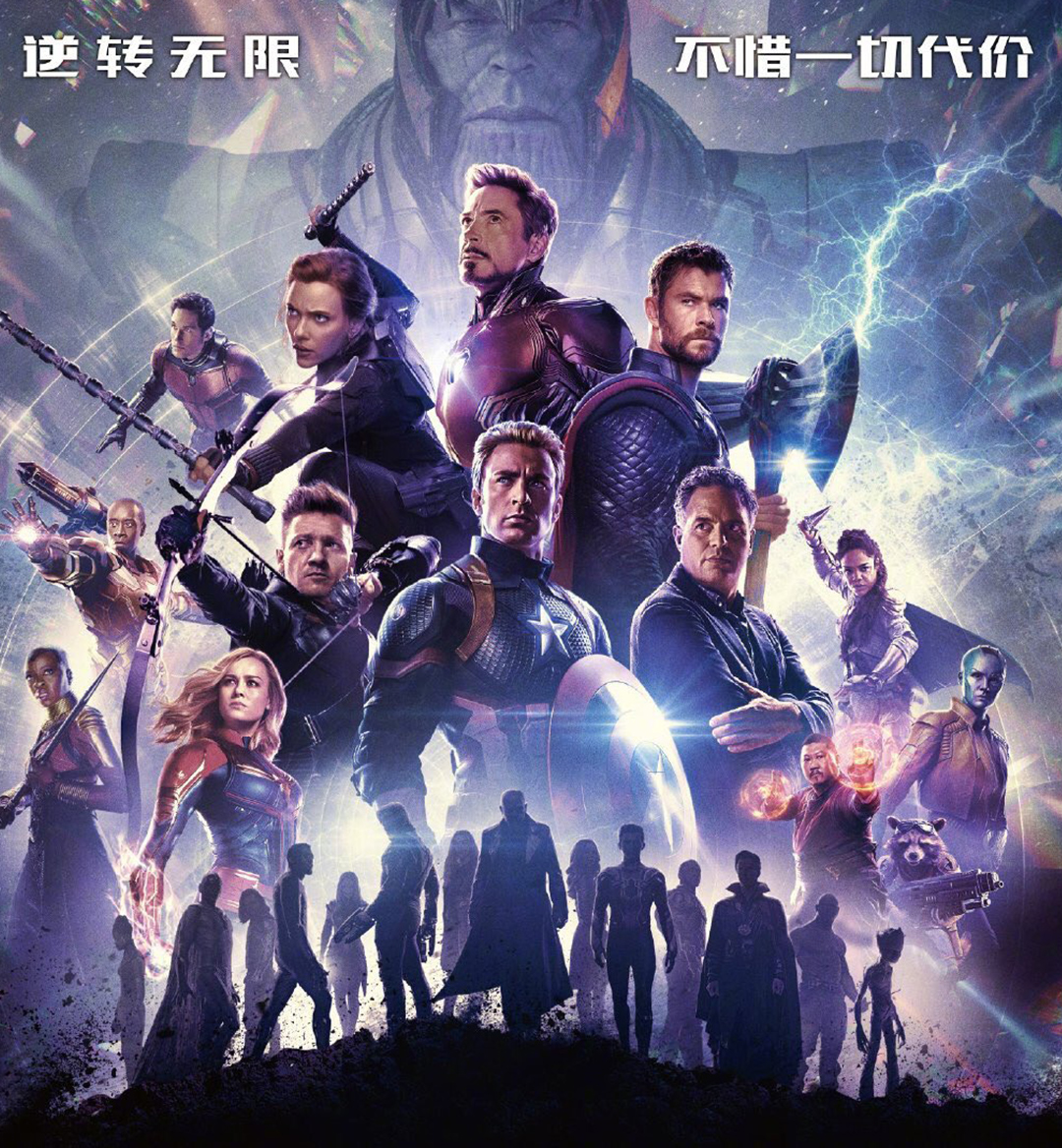 Part of the ‘Avengers: Endgame’ poster for the Chinese market / Marvel Studios

We’re in the final countdown to the April 26 world premiere of Avengers: Endgame, the hotly anticipated sequel to Infinity War and the concluding chapter in Marvel’s decade-long Infinity Saga. Infinity War ended with Thanos eradicating half of all life in the universe with a snap of his fingers thanks to his all-powerful gauntlet, which holds the six Infinity Stones. With our heroes’ numbers decimated and the world reeling in the aftermath of such a cataclysmic event, how will the Avengers defeat Thanos?

Luckily, the internet has some ideas.

1. ‘Endgame’ will introduce a new universe for future Marvel films

One theory speculates that the characters who got dusted at the end of Infinity War didn’t actually die but were instead transported to an alternate dimension. The same theory predicts that Endgame will take viewers into this parallel universe, which will then function as the primary setting for future stories.

This makes a certain amount of sense. After the Thor, Iron Man and Captain America film trilogies, the next phase of the MCU is expected to focus on a new and more diverse lineup of heroes. Meanwhile, Black Panther and Spider-Man, who both died in Infinity War, already have solo sequels confirmed, while the characters left alive, including Iron Man and Captain America, are coming to the end of their contracts with Marvel. Leaving Tony Stark, Steve Rogers and the other original Avengers behind in the old universe would wipe the slate clean and allow new characters to take on their superhero titles moving forward. fans already believe that the next Captain America will be either Falcon or the Winter Soldier.

Starting Phase 4 in a brand new reality would also provide a handy in-universe explanation for the imminent introduction of the X-Men, who have previously been excluded from the MCU due to rights issues but were recently acquired in the Disney-Fox merger.

2. ‘Endgame’ will take us back in time

We’ve known time travel is possible in the MCU for a while. The Time Stone was an important plot device in Doctor Strange, and the entire climactic scene in Infinity War revolved around Thanos’s ability to rewind and replay events to his liking. So as soon as the credits rolled on that movie, a large number of fans became convinced that the Time Stone will play a huge role in undoing The Snap.

Remember when Doctor Strange willingly handed over the Time Stone to Thanos? Having explored millions of possible outcomes to the conflict, he told Iron Man that surrendering the stone was “the only way” they could win, implying that he had a plan up his wizard’s sleeve.

A photo from the set of Endgame shows Tony Stark wearing Doctor Strange’s cape, so it is likely he will be the Avenger who uses magic to travel back in time, possibly aided in his quest by the Ancient One (Tilda Swinton has been confirmed as making a cameo). This story line would dovetail with another popular theory that Tony Stark will visit the future and meet his and Pepper Potts’s daughter, rumored to be played by Thirteen Reasons Why actress Katherine Langford.

3. At least one of our heroes will sacrifice himself

With Chris Evans and Robert Downey Jr. all but confirming they are done with their heroic alter egos, killing off one or both of them would be a suitably dramatic way to draw a line under the past ten years of storytelling.

As fans will recall, the Soul Stone requires a sacrifice from those who wield it. This was what led Thanos to kill Gamora. So it stands to reason that in order to harness the power of the Infinity Gauntlet and reverse the events of Infinity War, either Captain America or Iron Man will give up his own life in one final noble act.

4. Gamora or Nebula will save the universe

Yes, we know, Gamora died in Infinity War, but it was also suggested that her essence lives on inside the Soul Stone, as depicted by the little girl we see at the end of the film. Perhaps being perpetually reminded of what he has done by her spirit will plague Thanos’s conscience and drive him to undo The Snap? Or Gamora’s soul will find a way to break out of the stone?

Alternatively, in the comics it is Gamora’s sister, Nebula, who succeeds in stealing the gauntlet away from Thanos and using it to thoroughly whoop him. Nebula’s deep-seated, icy rage has been a defining aspect of her character in the Guardians of the Galaxy movies, and it would be incredibly satisfying to see her take revenge on her monstrous father in Endgame. Plus, there has to be some reason Nebula was the only other survivor of The Snap on Titan alongside Iron Man.

5. Loki is alive and playing a long con

While Tom Hiddleston’s trickster god was unceremoniously killed off in the opening scene of Infinity War, a contingent of fans refuses to believe that it was really him. The brutal death scene certainly seemed to confirm this was, in fact, Loki, but eagle-eyed viewers point out that Loki tried to stab Thanos with his left hand rather than his right, which implies he was merely a projection. Might the villain-turned-antihero emerge at a critical moment in Endgame to help his brother, Thor?

Then there’s also the fact that a Loki spinoff is currently in development. If we’re to believe characters killed off before The Snap will stay dead after Endgame, then Loki has to be alive, and he has been tricking us all the whole time.

6. The Quantum Realm is the key to saving everybody

The post-credits scene in Ant-Man and the Wasp revealed that Ant-Man, aka Scott Lang, was on a mission in the Quantum Realm when The Snap occurred, killing his friends and leaving him stranded there. We know from the Endgame trailer that Ant-Man somehow manages to return to Earth to help the Avengers. Some fans are also speculating that Carol Danvers has also been in the Quantum Realm, and this is where she was when she received the distress signal from Nick Fury in the stinger of Infinity War.

The Quantum Realm remains largely unexplored in the MCU; it has all kinds of properties that may figure significantly in Endgame. There’s a seemingly throwaway line of dialogue from way back in Thor: The Dark World, that makes reference to the Soul Forge, a quantum field generator, which transports matter and energy from one place to another. Basic science dictates that energy cannot be destroyed, only transferred, so perhaps the Snap-tured victims of Thanos still exist in an altered state in the Quantum Realm?

7. Ant-Man will blow up Thanos from the inside

This is my fave fan theory, and it’s a quite a popular one: Scott Lang will use his high-tech suit to shrink to microscopic size, sneak into Thanos’s body (possibly through his eye, ear or mouth, although Twitter favors the butt) and then grow to giant proportions, exploding the Mad Titan from the inside out.

Paul Rudd, who plays Lang, responded skeptically to this theory in an interview for Ant-Man and the Wasp, saying, “If there’s one thing we learned in Infinity War, it’s that Thanos can take a lot of punishment.”

so paul rudd read my tweet about ant man crawling into thanos’ ass and expanding OUT LOUD in an INTERVIEW and discussed it i’m in shock pic.twitter.com/YfBsPMnfoW

It’s unlikely a super-villain who has been plotting mass murder for the duration of the MCU so far will be undone in such a manner, but a small and immature part of me really hopes this is how it goes down.