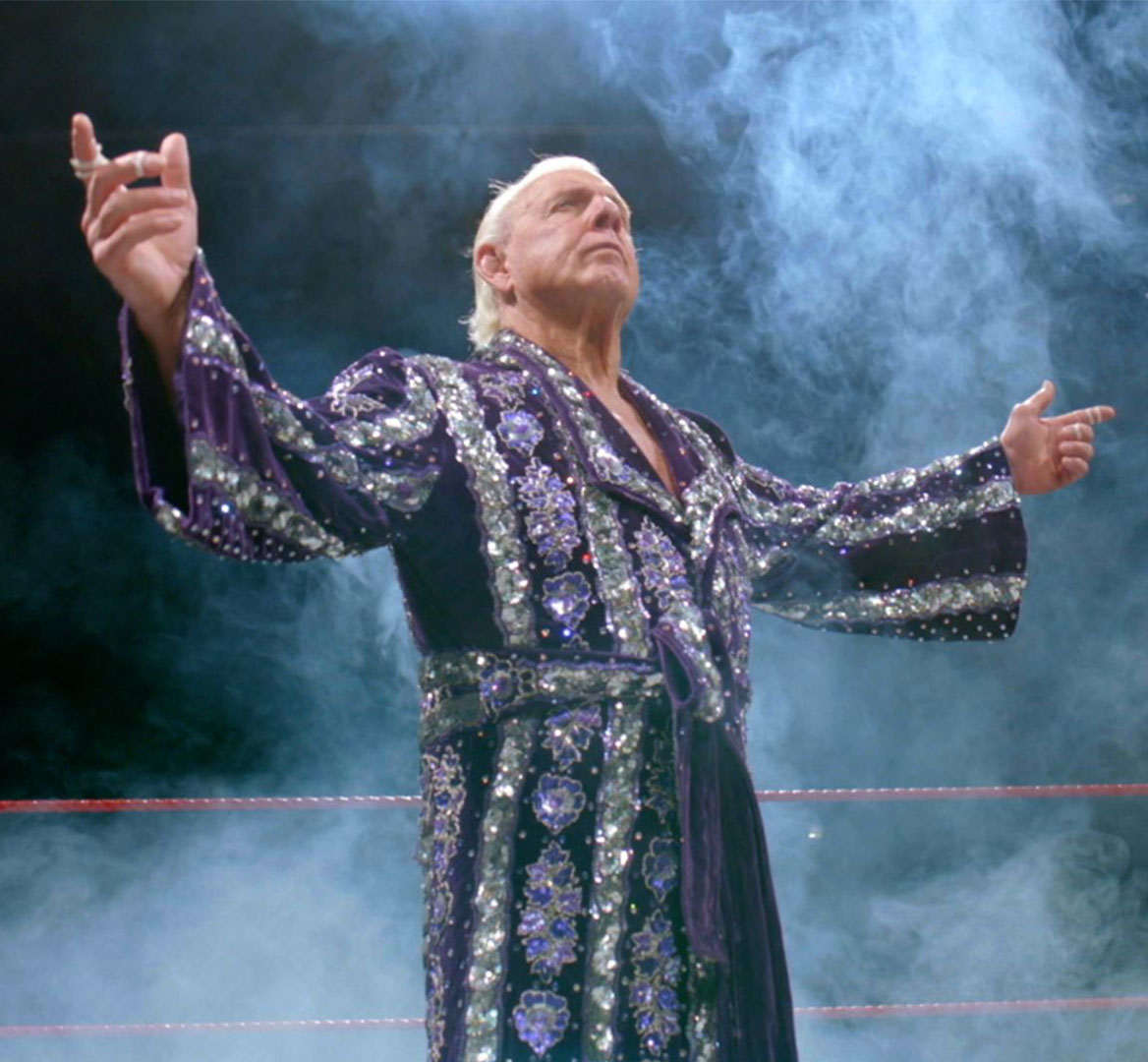 At the border of fact and fiction is pro-wrestling: a clandestine world in which athletes agree to a sacred code so as to keep the secrets of the industry as safe as possible. But with the downfall of kayfabe probably occurring long before the sport’s heyday in the 1980s, who has the right to say what is “the truth?”

The history of wrestling documentaries is complicated, especially because so many are filled with outright lies. That being said, some films on the subject can at least help explain the bizarre appeal of these combat spectaculars.

We’ve narrowed down a list of 12 fascinating documentaries that don’t exactly make the boundary between reality and fantasy more firm — but at least help elucidate certain aspects of the industry. From openly gay icons to superstars battling addiction: here’s our list of the best movies exploring this mysterious business.

American wrestling fans often undervalue the toughness and grit of Japan’s Joshi superstars. Perhaps no other film has explored the brutality of wrestling training as plainly as Kim Longinotto and Jano Williams’s Gaea Girls, a 2000 documentary on Chigusa Nagayo and Meiko Satoumura’s vicious dojo. Although all the participants are consenting adults, the violence enacted upon the school’s trainees borders uncomfortably on abuse. Nagayo’s rigid tutelage clearly is informed by her dedication and respect for the craft of pro-wrestling — at times it seems as if she is on some kind of sacred pursuit with her students — but to what extent is her involvement in the sport an extension of her unresolved trauma and sadism? Although quite minimalist in style, the emotionally complex questions are the real subject of this challenging little film that caused even the directors to shed several tears:  "I believed that wrestling was all show," Longinotto told The Independent, "and that we were going to make a film about wonderfully dedicated women athletes … In a way, the more disturbing it got, the more hooked we became."

2. ‘GLOW: The Story of the Gorgeous Ladies of Wrestling’

Netflix’s deeply earnest drama about women in a campy 80’s wrestling federation was directly inspired by this emotionally moving documentary depicting the real-life struggles of the fighters in a semi-parodic TV show that somehow garnered a cult following. While the movie does explore the long-term damage done to these women's’ bodies, what it also considers is the eternal friendships fortified by hairspray and bloodshed. It’s simply impossible to not shed a tear when the cast is finally reunited — prompting them to break out into the hideously written rapping that made the show a guilty pleasure when it aired decades ago.

The Paris is Burning of wrestling documentaries, Beyond The Mat is imminently quotable, relentlessly tragic, and implicitly charming. The occasionally irritating naivete of director Barry W. Blaustein is an interesting canvas onto which a picture of dedication and sacrifice is painted. With close-up portraits of Jake The Snake Roberts, Terry Funk, and Mick Foley that investigate not only the glory but also the melancholy of the industry — Blaustein deftly balances humane empathy and subtle condemnation for these individuals whose lives were both saved and ruined by their sport.

It’s not often that you see any wrestling media take the form of French New Wave cinema. Director Marie Losier’s magically real depiction of the openly gay luchador Cassandro’s life is more of a visual poem than a fact-finding mission. Losier followed the legendary exótico for years as he battled addiction and his own failing body but continued to wrestle despite the setbacks. Through the film, Cassandro becomes canonized as a kind of living wrestling saint who has now gone on to inspire a new generation of openly queer talent.

“Let people talk!” Cassandro told us last year. “But prove them wrong when you get up in that ring.”

HBO’s compassionate portrayal of the life of Andre The Giant explored how one very large man became an even bigger cultural phenomenon. Although the basic information may not be new to die-hard wrestling fans, footage of the notably stoic Vince McMahon actually shedding tears while recounting fond memories of his good friend makes this doc worth the price of admission. In this movie Andre is not just some tough-as-nails brawler, he’s also a lighthearted prankster and somewhat of a gentleman — a side we rarely see if we only live in the world of kayfabe.

Ric Flair became a paradigm of opulence in the 1980s by turning braggadociousness into an art form. But what propelled him to success ultimately became his downfall, as his battles with alcoholism robbed him of both his dignity and his family. ESPN’s documentary explores the highs and lows of wrestling’s self-proclaimed greatest entertainer. It’s impossible to deny the propagandist strain of the project — WWE likely had to approve of the film’s final cut when all was said and done — but hearing Ric’s honest (and not always coherent) thoughts about his own accomplishments and tribulations makes for an interesting study of a psychologically damaged yet somehow still triumphant person.

The Great Sasuke at one point was a global wrestling icon, dazzling audiences around the world with daringly graceful, high-flying acrobatics. After receiving a telepathic message from God himself — or so Sasuke claimed — the masked brawler embarked on a life of dashing adventure until his body began collapsing in on itself. This documentary is a meditation faded glamour but also a thesis on the enduring dignity of a star who continues to inspire hope for so many fans. With a runtime of only an hour and ten minutes, this slice-of-life movie is a humanizing picture of a real-life masked superhero.

Although American pro-wrestlers continue to amass a growing mythos, the worship of our costumed athletes is nothing compared to the majesty of luchadors in Latin America. With its own idiosyncratic cultural milieu, the glory and mystique of Lucha Libre are revealed as both more honorable and far bloodier than its more sanitized United States counterpart in this revealing and thoughtful documentary that treats the subject with an incredible honor. Spotlights are focused on Blue Demon Jr., Sexy Star, Arkangel, and Faby Apache, who discuss their dreams, ambitions, and fears about life in the ring while paying respects to those who martyred themselves before them.

As with everything produced by WWE, it’s impossible to tell what in this short-lived docu-series is completely fabricated to create an aura of prestige around the company itself and what is actual fact. That being said, Breaking Ground (narrated by William Shatner!) provided a brief peek into the lives of what at the time was WWE’s minor leagues, showing just how charming many of NXT’s rising stars truly are. From Nia Jax working on her entrance to Tyler Breeze adopting a stray dog, Breaking Ground is an interesting meta-experiment showing how WWE actually creates three-dimensional characters through more than just in-ring work. The high point is Sami Zayn offering a semiotic breakdown of how wrestling works as a language: A match is a story, each sequence is a sentence, the moves are words, and the pins are punctuation.

Although the film faced a small backlash from a vocal group of LGBTQs who felt the movie — and Kenny Omega’s career — was queerbaiting, the Omega Man documentary is nonetheless groundbreaking for non-judgmentally tackling the taboo subject of queerness in pro-wrestling at all. Serving as a brief retrospective of the eponymous hero’s career, by focusing in on the Golden Lovers storyline, documentarian Yung Chang taps into the emotionality of a deeply meaningful homo-social (but probably not homosexual) romance in order to explain the appeal of pro-wrestling as a long-term storytelling medium. Kenny remains charmingly socially awkward throughout.

An excellent documentary for entry-level wrestling fans to learn about the passion of indie and TV wrestlers and the basics of what goes on in the industry. Simple and clear descriptions of wrestling history are paired with gut-wrenching footage from indie shows, laying out an accessible explanation of why people become so enraptured in this bizarre and bloody sport. Not too much new information for lifelong fans or industry insiders but a good reminder of the sacrifices wrestling truly requires. Beware: the film features some truly sanguine scenes.

With the explosion of true crime’s popularity within the past decade, it’s no surprise that someone would explore the underbelly of the pro-wrestling world within that genre. Although at first, it might seem like a stretch, the mash-up actually makes perfect sense: “This is [a] world where [reality] is very gray,” producer Evan Husney told Oxygen.com in 2019. “There are so many true crime stories about unjust murders – honestly this show was just trying to be 'Unsolved Mysteries' but with wrestling … We were trying to separate fact from fiction. But not just literally in the pursuit of truth — it's more about trying to play in that gray area. We're trying to show you how that gray area is super unique and singular to wrestling."

Vice’s controversial docu-series is now on its second season and has explored a wide variety of topics ranging from Bruiser Brody’s murder to the legend of New Jack. Each episode does a good job of balancing essential info for non-wrestling fans and obscure factoids for the more hardcore audience.