The nostalgic TV show will be revived in 2019 as a weekly series, and here are three battles we wish will happen 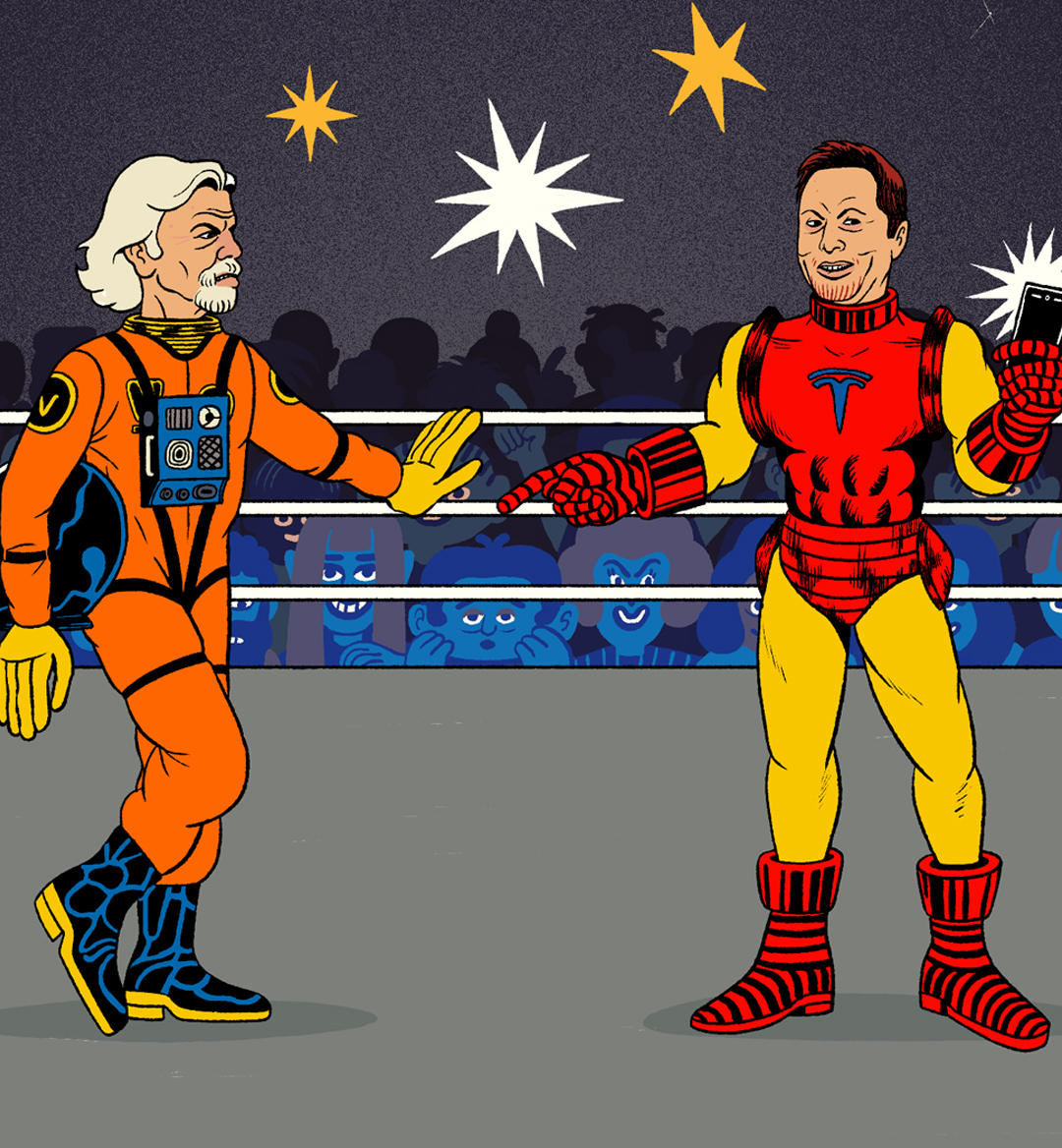 MTV Studios and Ice Cube have partnered to revive the late 1990s and 2000s claymation series Celebrity Deathmatch, a popular show that pitted stop-motion animated celebrities against each other in satirically violent brawls. Past matchups include Mariah Carey vs. Jim Carrey, Madonna vs. Michael Jackson and The Spice Girls vs. the Hanson brothers. In today’s climate—filled with Twitter spats, rap beefs and political intrigue—many matchups come to mind. Today, we’re playing matchmaker through the lens of entrepreneurship.

It’s the battle of the entrepreneurial billionaires. Musk is the face of Tesla Motors, SpaceX and SolarCity, while Sir Branson is the face of Virgin Group. Pioneering peers of innovative companies, these two minds don’t have concrete squabbles to riff off. But this is wish fulfillment, so I must put on my best Don King wig and promote the hell out of something. Although Musk and Branson are both engaged in the 21st-century privately-funded space race, SpaceX and Virgin Galactic aren’t direct competitors. SpaceX is focused on building the most powerful rockets mankind has ever seen to populate distant planets, while Virgin aims to provide luxury commercial space flight.

“I see Musk as a younger version of myself” Branson once said. The adult in me would view that as praise, but the impish kid in me would call that being “sonned.” Musk even had the audacity to say SpaceX is in a “different league” and that Virgin Galactic “will be a really fun joyride.” Musk has shown frenetic and flippant tendencies before, but these comments can easily be seen as a bit condescending.

If I had to bet on the winner, it’d be Musk. That man is the closest thing we have to Tony Stark and a James Bond villain.

If there’s one place there is direct competition between the two, it’s in their Hyperloop moonshots. Both innovators are racing to become the first to standardize high speed magnetic levitation. If I had to bet on the winner, it’d be Musk. That man is the closest thing we have to Tony Stark and a James Bond villain; there’s an infinite number of ways he could devise a plan to neutralize a threat.

The beef between Apple CEO Tim Cook and Amazon founder and CEO Jeff Bezos surely lands on the rare end of the spectrum. Their companies overlap in some products and services. Broadly speaking, the companies offer a litany of business and consumer services, and they create amazing consumer products: Amazon Echo and iPhone. Both devices come with proprietary artificial intelligence assistants, Alexa and Siri, an arena where they directly compete for a footprint. However, if we’re looking for the top reason Cook and Bezos should duke it out in the ring, maybe it comes down to the title of world’s most valuable publicly traded company. Because capitalism, right? Apple hit the trillion dollar mark in August, and Amazon quickly followed suit in September. Although, due to the innate volatility of markets, Amazon suffered losses in recent trading sessions and fell below the threshold.

it would be wildly entertaining if Cook and Bezos manifested Siri and Alexa into physical entities to have a tag-team match for the digital ages.

Nevertheless, if this fantasy match should become reality, it would be wildly entertaining if Cook and Bezos manifested Siri and Alexa into physical entities to have a tag-team match for the digital ages. Want to add a Shakespearean twist? Have the rival A.I. assistants team up to dissent against their creators. Skynet is online.

Functioning as Celebrity Deathmatch’s executive producer, Ice Cube should be front and center in the revival of the show as a fighter. The godfather of multi-hyphenated rappers, Cube has written, produced and acted in movies for the culture, namely the Friday series. Undoubtedly, Cube is the original hip-hop entrepreneur. His most recent achievement is the creation of BIG3, a 3-on-3 pro basketball league founded alongside Jeff Kwatinetz, a fellow Celebrity Deathmatch producer and entertainment executive. In fact, a matchup with fellow musician-entrepreneur and fellow bad boy in black Gene Simmons should be a marquee fight. Simmons is none other than the co-lead singer of legendary rock band KISS. In his own right, Simmons has found success as a musician, businessman, actor and television personality.

Simmons controversially once stated he's “looking forward to the death of rap” in a Rolling Stone piece. Two years later N.W.A, one of hip-hop’s most influential and greatest groups, used their Rock & Roll Hall of Fame speech to address Simmons’s comments and made it clear the world should get used to rap. As Cube emphatically stated, “You goddamn right we rock and roll.” It’s not so much a genre as it is a spirit; a spirit the group acutely embodies.

With all the unwarranted shade Simmons has directed toward rap, the public would relish seeing a claymation fight between these two legends.

The flames were further fueled when Howard Stern coaxed Cube into saying how he might overcome a height advantage if a fight were to materialize. Since Cube’s comments, the two continued to briefly trade Twitter quips on the topic. With all the unwarranted shade Simmons has directed toward rap, the public would relish seeing a claymation fight between these two legends. And with rap and hip-hop music now the most popular genre on the U.S. charts, Simmons may soon come to eat his own words thanks to a special OG with an attitude straight outta Compton.