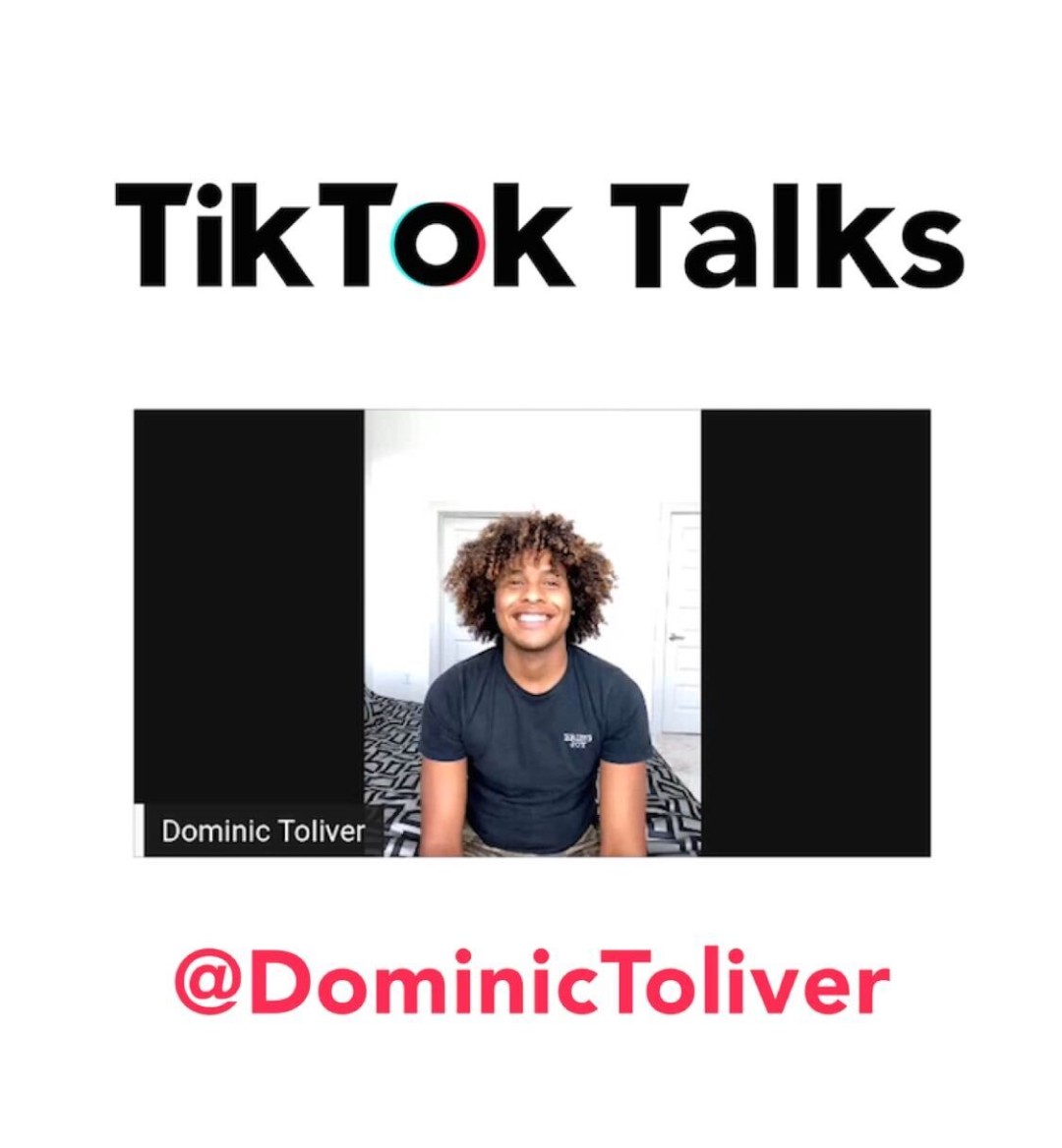 With 9.6 million followers on TikTok, Dominic Toliver knows a thing or two about growing his brand on social media. ONE37pm’s Omari White recently caught up with the 26-year-old creator, and he shared everything from the key to building a following on TikTok to his dream of collaborating with Will Smith.

In case you’re not already familiar with Dominic, allow us to introduce him a bit. The newly married social media star is famously known for his comedic TikTok videos, which he creates alongside his wife, Isabella (Bella) Kunst. The couple, who recently announced they’re expecting their first child together, also post tons of vlog-style content over on their shared YouTube channel, Dom&Bella.

But Dominic didn’t skyrocket to TikTok stardom overnight. In fact, he started gaining popularity on Vine and musical.ly (R.I.P.). And while fans know Dominic best for his social media content, he’s also pursuing acting. You might even recognize him from starring in Taylor Swift’s official music video for “The Man.” He’s got quite a lot of accomplishments under his belt. So without further ado, let’s hear from Dominic about the secrets behind his success.

ONE37pm: What’s your favorite filter on the TikTok app?

ONE37pm: What was the driving moment that made you create a TikTok account?

Dominic: I was on musical.ly. And then, I guess TikTok and musical.ly merged, and it became TikTok. I had quite a bit of a following on musical.ly, so from there, I was like, ‘Dang, this is kind of new. This is different. And it’s more raw.’ So, you know, before, I did these kind of like little lip sync acting [videos]. And then, from there, TikTok allowed you to do more original content. You can express your creativity… I used to do Vine back in the day, and so all my friends said, ‘Yo, hop on it.’ And we just started playing with it. I collaborated with them. And then a couple videos went viral. So I just fell in love with it, man. And just started pushing out more and more content.

ONE37pm: I was looking at a couple of your TikToks, and I saw you got busy to the Hip Hop Harry trending sound...

Dominic: I love that sound, man! Every trend that I see on TikTok, you know like, I look at it, but I twist it—and I just try to make it like ‘me’ and just make it how I would perceive it. You know what I mean? So just put it out there and see what the people think. And hey, it’s always a good outcome.

ONE37pm: Do you use TikTok to discover new music? If so, what songs have you discovered?

Dominic: Man, I think just about any song that you hear on the radio now—I feel like most of them came from TikTok. And the reason why know this is because I worked with a few artists that put their song on TikTok and then us influencers on TikTok, we basically make up a dance or just do a comedy theme around their music—and then from there, it’ll just blow up. You know what I mean? So… a lot of music that I listen to now actually came from TikTok. And then, a week later I will hear it on the radio—I’m like, ‘Are you serious? Hey, I did a song to this!’ And it’ll end up on Apple Music on the Top 100. I think it’s a really cool platform to hear music or just like trending things.

ONE37pm: If you could pick anyone to do a Tiktok collaboration with, who would it be and why?

Dominic: Man, that’s tough. If it will happen, and if I can make it happen, the person that I would collaborate with is most definitely Will Smith. He’s on the platform. He entered the platform I would say about, maybe about a year ago. And man, this guy is just like amazing. You know, he has his own team and his videos are just rock solid. So if I could collaborate with him, that would be amazing, and the reason why is because he’s one of my role models. Ever since I was a kid, I’ve always looked up to him. And that’s the reason why I’m doing the things I am doing today. I’m a pursuing actor, and ever since I got involved with social media, I’ve just been doing my own thing.

ONE37pm: For all those trying to get started on TikTok, what advice would you give to them?

Dominic: Don’t stop. I would say don’t ever stop. Keep pushing. I think consistency is key. And don’t worry about numbers. I am a victim of that. I was always worried about numbers, and if it didn’t get a certain amount of numbers, I would leave. I would just quit everything. I’m impatient. If I don’t receive the numbers, then I’ll stop. Don’t go that route. The more you push, the more content you push, you’re going to get seen regardless—whether it’s 10 people, 100 people, 100,000 people. So that’s one thing I’ve noticed as I was growing and growing. You just gotta be consistent. Push out the content. You’re going to get noticed. I think if you imagine it—think it, dream it, make it reality—you can make things happen.

Something tells us this is only the beginning for Dominic. Be sure to check out his dope content all across TikTok (@dominictoliver) and Instagram (@dominic_toliver).