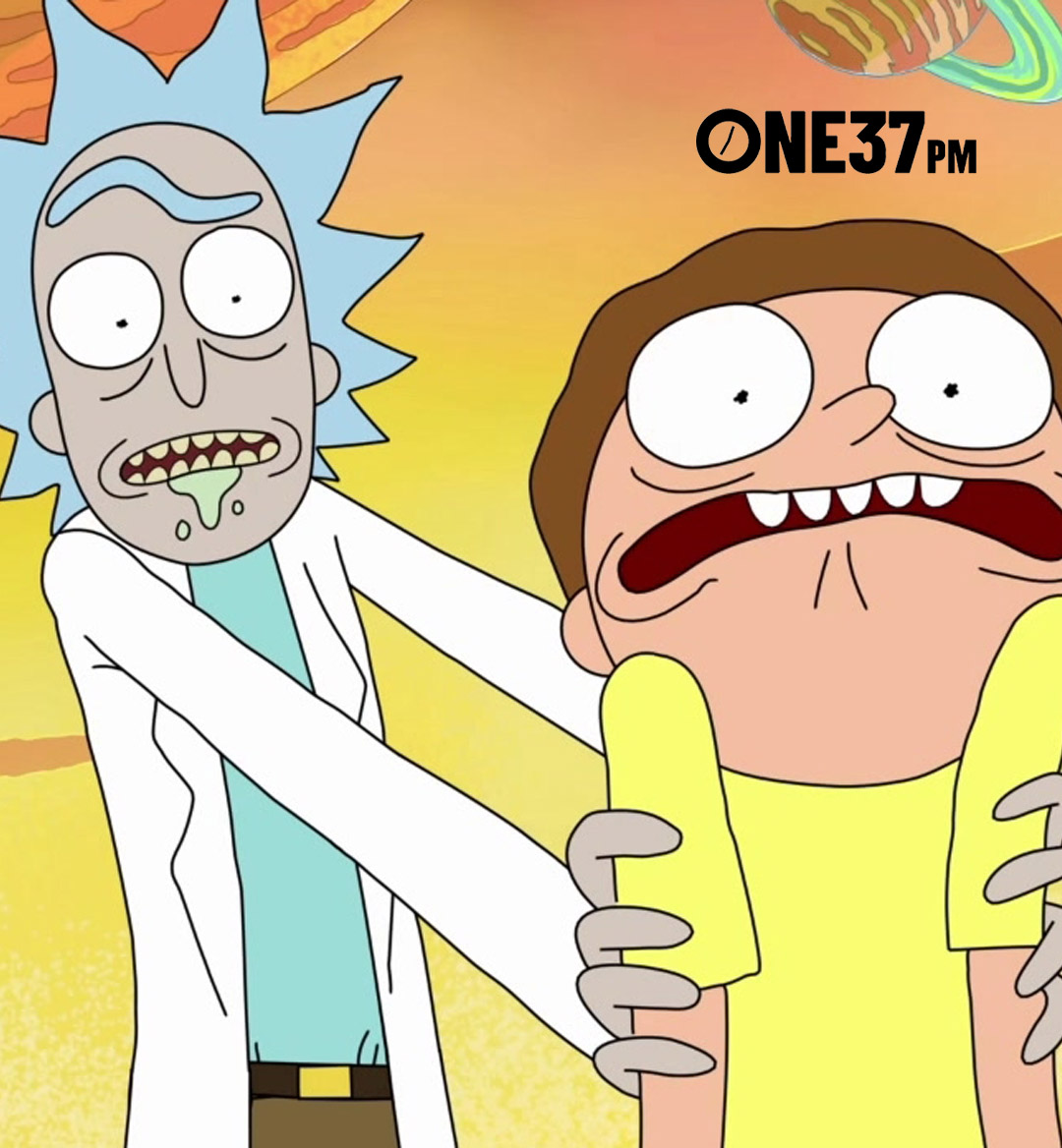 Adult cartoons are a dime a dozen these days, but there’s something unique about the way Rick and Morty took hold of the cultural zeitgeist. Created by Justin Roiland and Dan Harmon, the Adult Swim original series is an outrageous and hyperbolic twist on the relationship between mad scientist Doc Brown and his teenage companion Marty McFly in the Back to the Future movies. The episodic series follows the adventures of the titular grandfather-grandson duo of Rick Sanchez and Morty Smith, both voiced by series co-creator Roiland, that sees Morty constantly being pulled into intergalactic danger thanks to his genius, alcoholic grandpa.

People who are unfamiliar with Rick and Morty may know that it’s full of vulgar catchphrases and flatulence, but underneath that crass layer is a show that is actually incredibly complex and bold in its storytelling decisions.

Every new dimension explored and character introduced becomes an opportunity for the show’s creative team to either poke fun at something or introduce a bit of unexpected sorrow or trauma to an otherwise silly moment. Even though there’s something wholly original about Rick and Morty’s comedic sensibilities and a cast of characters, a lot of other shows out there are similarly bold in the way they deliver their humor or look at the world. So put down the portal gun and check out these 15 Shows like Rick and Morty!

If the overwhelming amount of pop culture references and meta-humor in Rick and Morty is your cup of tea, then you should definitely check out Community. Created by Rick and Morty co-creator Dan Harmon, the NBC sitcom follows a group of misfits at the Greendale Community College as they bond and “study” together in a study group. The show is so much more than this simple premise, though, as each episode gives the quirky ensemble- featuring hilarious performers like Donald Glover and Alison Brie- ample room to get into shenanigans and bond both inside and outside of the classroom.

Clearly, Family Guy, American Dad, and The Cleveland Show weren’t enough for Seth MacFarlane, as the prolific show creator also turned his attention to the final frontier in The Orville. A live-action series that plays as a Star Trek parody, The Orville follows the crew of the USS Orville as they explore the galaxy in the 25th century. The ensemble show is led by MacFarlane as officer Ed Mercer and, despite its comedic undertones, it sometimes feels like a more genuine Star Trek series than some of Viacom’s recent attempts.

Adult Swim has evolved a lot since it first launched in 2001, but throughout most of its existence Jackson Publick’s The Venture Bros. has been a staple on that “channel.” A satirical spin on old cartoons like Johnny Quest, the show follows the exploits and adventures of the Venture Family as they interact in a mad scientist and superhero-filled world. The phenomenally voiced show lasted for seven seasons and evolved into a hilarious parody of modern nerd culture rather than just fixating on old Hanna-Barbera tropes.

One surefire way for a series to feel like Rick and Morty is for it to be written by a Rick and Morty alum. The newest Marvel show streaming on Disney+, Loki, is a time-travel-filled adventure series created by Michael Waldron, a former producer and writer on the Adult Swim hit. Tom Hiddleston once again plays the Norse God of Mischief, but this time he finds himself supervised by the Time Variance Authority, a seemingly all-knowing organization that wants to defend the sacred timeline. The show definitely rewards long-term fans of the Marvel Cinematic Universe, but it is accessible and entertaining for people who just want to check it out due to its connection with Rick and Morty.

Premiering in 2009, Archer is an animated parody show set inside a dysfunctional intelligence agency. The series is witty and has a unique structure- certain seasons ditch the intelligence agency setting all together to see the characters become Miami drug dealers or Noir detectives- but what really sets this show apart from other adult cartoons is its exemplary ensemble cast, led by H. Jon Benjamin as the womanizing Sterling Archer. For all the hardcore Jerry Smith fans out there, Chris Parnell also lends his voice to Archer as Cyril Figgis, a straight-laced agent who is often the butt of many of Archer’s jokes.

The tagline “A moody genius and their companion travel around space and time going on adventures” perfectly describes both Doctor Who and Rick and Morty. The BBC series follows The Doctor, an alien from the planet Gallifrey who uses his brain and handy sonic screwdriver to solve problems and help people across the galaxy. A sometimes silly, sometimes extremely serious show, Doctor Who remains fresh after 50+ years thanks to the Doctor’s natural ability to reincarnate and keep exploring the cosmos with a new personality and new face.

Thanks to eccentric billionaires like Virgil Bronson and Jeff Bezos, rich people doing whatever they want in space doesn’t sound as absurd as it should anymore, but Avenue 5 injects some delightful chaos back into the subject. From the satirical mind of Veep and The Thick of It creator Armando Iannucci, Avenue 5 follows what happens after an artificial gravity accident causes an interplanetary cruise ship (the Avenue 5) to veer off course. With only eight weeks of supplies onboard to sustain everyone, panic sets in when it is revealed it could take up to three years to return to Earth. The ensemble show was renewed for a second season in early 2020, but no official premiere date has been set due to pandemic-related delays.

Matt Groening swapped suburban America for the medieval castles of Dreamland in the Netflix original Disenchantment. The series follows Princess Bean (Abbi Jacobsen), a notorious and happy alcoholic, who is unhappily set to marry a Prince. While peaking at her wedding gifts, Bean discovers a little demon named Luci (Eric Andre), who despite being sent there to curse Bean, ends up empathizing with her and discouraging her from getting married. With Luci and her new friend Elfo (Nat Faxon) by her side, the three of them embark on a series of adventures as the elites of Dreamland jostle for power thanks to the abandoned wedding, and the alliance could have solidified.

Rick and Morty is often praised for the way it handles complex emotions and addictive personalities, but the Netflix original BoJack Horseman tackles these ideas in a much more direct manner. Created by Raphael Bob-Waksberg, BoJack Horseman follows former television actor Bojack (Will Arnett) as he struggles to revamp his Hollywood career and come to terms with his depression and narcissistic tendencies. Set in a world where talking animals and people interact with each other and work side-by-side, the whimsical and silly nature of the show obscures a tragic engine that constantly picks at and explores the insecurities of each of its lead characters.

Sam Oliver’s (Bret Harrison) life flipped upside down on his 21st birthday when his parents explained that they had actually promised his soul to Satan (Ray Wise) before he was born. Now, the college dropout and hardware store employee must accept his new destiny as a “reaper,” a bounty hunter who tracks down souls that have escaped from hell, or his mother will be banished to hell. The show only lasted for two seasons, but its unique blend of supernatural elements and “stoner comedy” tropes makes it the perfect binge for anyone looking for a show similar to Rick and Morty.

Adventure Time may have been marketed primarily to children because it was on Cartoon Network rather than the after-hours adult swim, but watch just one episode, and it's clear the creators were aiming to please and entertain viewers of all ages. Created by Pendleton Ward, Adventure Time is a fantastic and consistently silly show that follows a boy named Finn (Jeremy Shada) and his talking, transforming dog Jake (John DiMaggio) as they go on adventures in the psychedelic and post-apocalyptic Land of Ooo. Finn and Rick themselves don’t have a lot in common, but they are the anchors for two of the most absurd, hilarious shows to come out in the last 25 years.

The townsfolk of South Park and the space-traveling Rick and Morty may not appear to have a lot in common on the surface, but take a deeper look at both shows and the main characters are all deeply raunchy individuals who are not afraid to speak their minds about what is unfair about life and the world.

For those who are somehow unaware, South Park is a deeply satirical show that follows the lives of four elementary school children, the most notorious among them being the extremely crass Eric Cartman, as they constantly find themselves being swept up into ridiculous and dangerous situations. It’s fair to say that the longevity of South Park has paved the way for shows like Rick and Morty to succeed and even earn a whopping 70 episode renewal back in 2018.

Similar to how Disenchantment let Simpsons creator Matt Groening dabble in fantastical storytelling, Futurama allowed him to tell silly science fiction stories. Futurama follows Fry (Billy West), a man from 2000 who is accidentally cryogenically frozen and subsequently thawed out in the year 2999. Despite its futuristic sheen, Futurama can really be boiled down to a hilarious workplace comedy as Fry quickly finds himself working alongside the crew of the Planet Express delivery company.  Each episode finds the ensemble on a new adventure as they dart across the galaxy, but it's really the quirky personalities and relationships between the three core characters, Fry, Bender (John DiMaggio), and Leela (Katey Sagal), that makes the show so addictive.

2. 'It's Always Sunny in Philadelphia'

Similar to Rick Sanchez, no topic is off-limits for the gang over at Paddy’s Pub. In It’s Always Sunny in Philadelphia, recently renewed for four more seasons, a group of self-centered, angry friends operate a bar and argue about the state of the world. Whether it’s critiquing Escape Rooms or solving the Gas Crisis, this group of drunks has opinions on just about everything. The gang has never been to another planet or entered a spaceship, but they have the same narcissistic, self-destructive tendencies that both Rick and Morty do.

Due to Rick and Morty's overwhelming success, Hulu ordered another space-themed comedy from co-creator Justin Roiland: Solar Opposites. The animated sitcom follows a family of literal aliens as they try to adjust to life as refugees in the middle of the United States after their home planet of Shlorp was destroyed.  A fun twist on the fish out of water trope, Solar Opposites is full of Roiland’s signature outrageous and sometimes heady humor, but it also does a good job at making the audience empathize with its central characters as they enter difficult situations in a new environment.

Watch Now On Hulu
Slide 1 of 3
Did you like this article?