4 Best Theories About the Future of the MCU After ‘Spider-Man: Far From Home’ 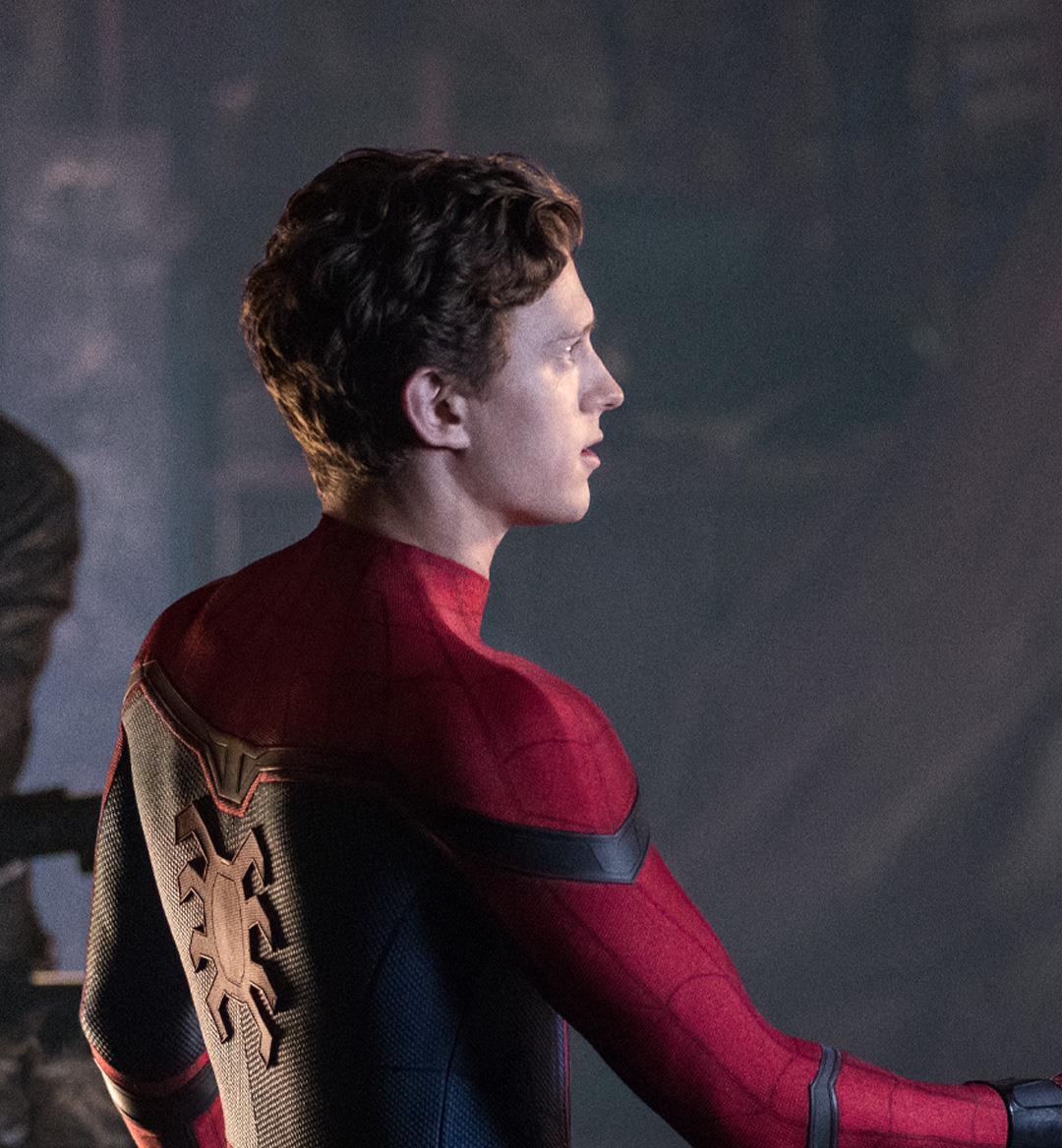 Spider-Man: Far From Home is absolutely crushing it at the box office—Forbes reports it has crossed the $600 million mark worldwide—and fans are already speculating what will happen next in the Marvel Cinematic Universe.

*Spoilers for Avengers: Endgame and Spider-Man: Far From Home follow*

Spider-Man: Far From Home was an important film for the MCU, not just story-wise but also as a closure point for the “Phase 3” slate of movies. With this movie, the Infinity Saga that the first 23 films created has officially come to a close. In Avengers: Endgame, Thanos is finally defeated and the universe is forever altered, thanks to “the Decimation” or “the Blip.” Some of our favorite heroes, like Iron Man and Black Widow, give their lives in the effort to stop him, and Captain America decides to go back in time to live out his life with his true love, Peggy Carter. In these heroes’ absence, other characters are going to have to step up to fill the void, thus laying the groundwork for some very interesting possibilities.

Spider-Man: Far From Home is full of Easter eggs and clues as to what Marvel has up its sleeve. Hell, the post-credits scenes alone are enough for all of us to spend months theorizing on what they actually mean.

What happens next is anyone’s guess, but here are some of our favorite theories on what Marvel might have planned.

Setting Up the Next Villain(s) 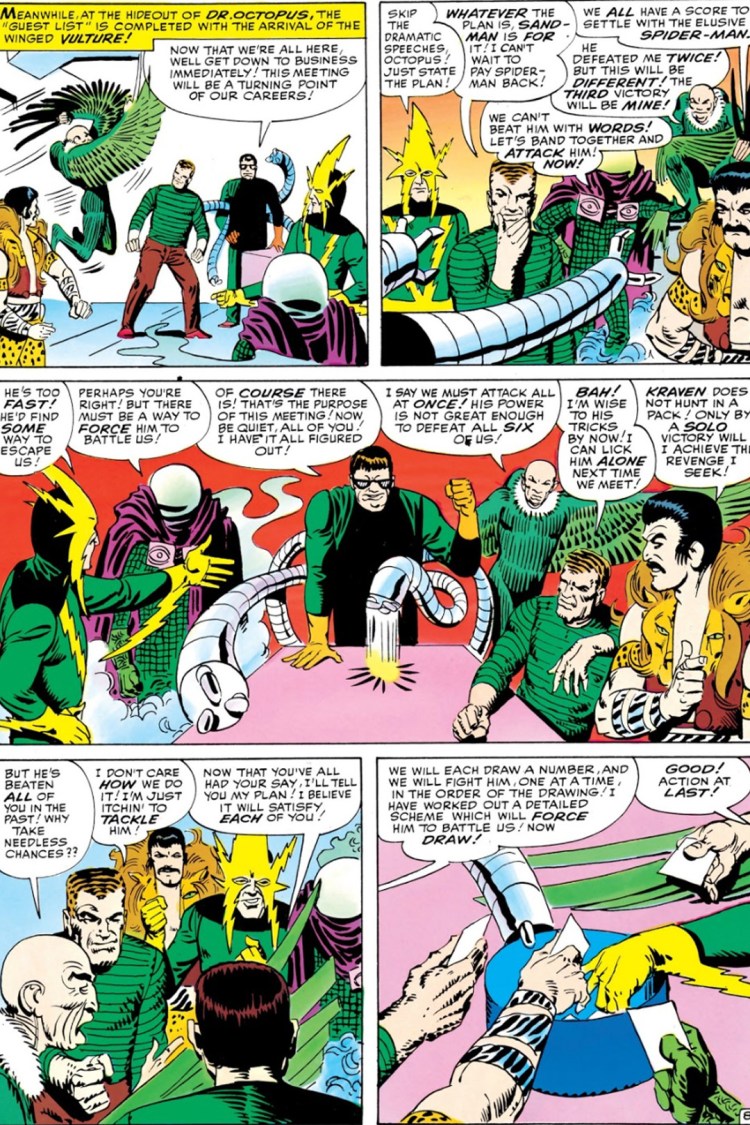 In the comics, some of Spidey’s rogues’ gallery of villains, tired of being defeated time and time again by the wall-crawler, decide to form their own supergroup (think the Avengers but evil) in order to finally beat him.

The original lineup of the Sinister Six consists of Doctor Octopus, the Vulture, Mysterio, Kraven the Hunter, Electro and Sandman. Despite their combined strengths, Spider-Man defeats them and they disband.

In the MCU, we have already seen the Vulture, played by Michael Keaton, in Spider-Man: Homecoming and Jake Gyllenhall’s Mysterio in Far From Home. While these are just two of the original members, two other supervillains who have appeared in the MCU, Scorpion and the Shocker, do fight against Spider-Man in Homecoming. And with the director of both films, Jon Watts, stating that he’d like the villain of the next movie to be Kraven, the foundation for a Sinister Six appearance has already been laid.

Mysterio does appear to die at the end of his fight with Spider-Man in Far From Home, but his death is far from confirmed and the door is certainly open for him to return. In addition, with one of Far From Home’s post-credits scenes revealing Peter Parker’s secret identity to the world, it’s almost a guarantee that numerous criminals will be hunting Spider-Man.

Hunting Spider-Man, you say? Sounds like a job that’s well suited to someone named Kraven the Hunter! 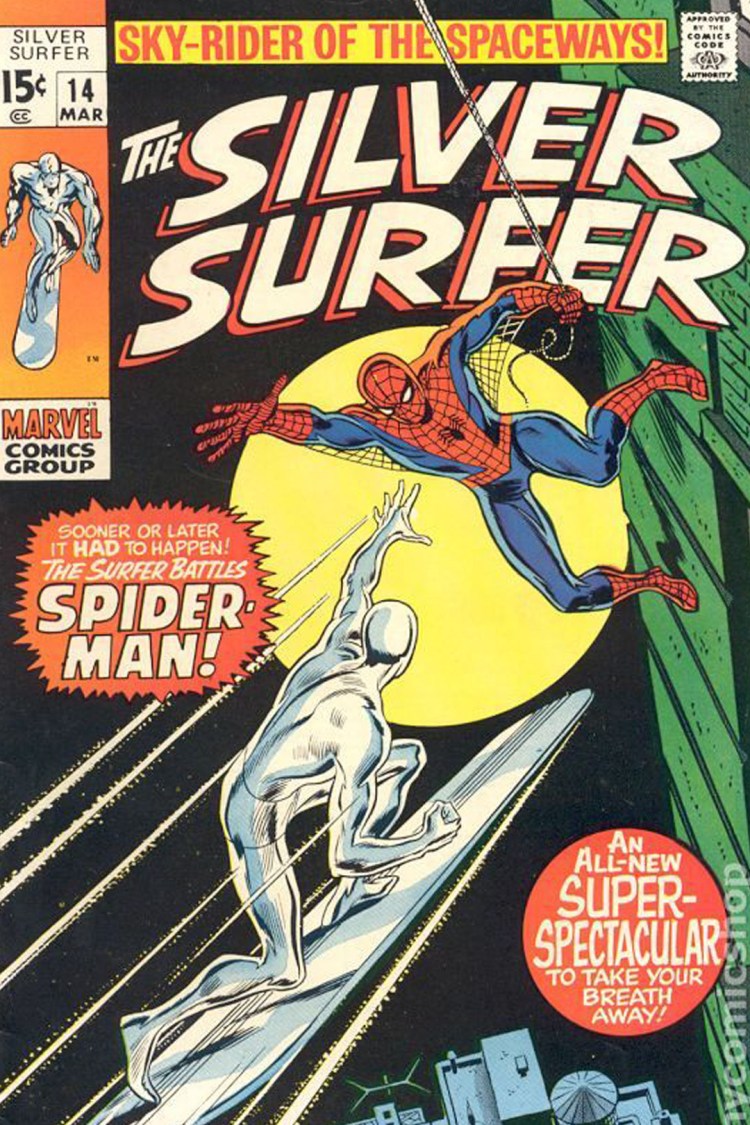 This theory might be part wishful thinking, part based in reality. Well, the MCU’s reality, that is.

With the Disney/Fox deal closed and Marvel getting back the rights to use the Fantastic Four and all the characters associated with them, like the Silver Surfer, it’s only logical that the studio would begin hinting at the first appearance of the superhero team.

It’s important to note that Far From Home had completed filming before the Disney/Fox deal had become official, but Marvel has retconned certain storylines in order to fit future narratives before. For example, Tony Stark saving a young Peter Parker in Iron Man 2.

In Far From Home, Happy Hogan has a coded conversation with Nick Fury: “Apparently, Mr. Stark was going through his belongings and there was a surfboard you left behind.” Fury responds, “The surfboard isn’t mine. Don’t ever call this number again.” 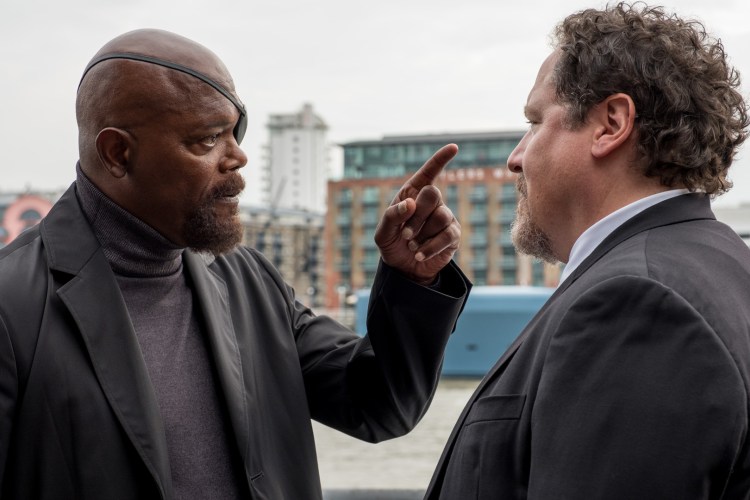 So, yes, just the mere mention of a surfboard isn’t exactly a confirmation or teaser of the Silver Surfer, but this is something Marvel could easily retcon at a later date as the first hint of this particular superhero.

In the comics, the Silver Surfer originally serves as the herald of the world-eating being Galactus. Yes, you read that correctly: This supervillain literally eats planets in order to survive. It’s been theorized that Galactus might serve as the next “big bad” of the MCU now that Thanos has been defeated, and bringing the Silver Surfer into the mix would only serve to lend more credence to that theory.

Let’s Get Cosmic With It

The big reveal of Far From Home’s post-credits scenes, other than J. K. Simmons making his triumphant return to the role of J. Jonah Jameson, is that the Fury we’ve been following the whole movie is actually Talos—the leader of the shape-shifting Skrulls who first appear in Captain Marvel—in disguise. In addition, Fury’s second-in-command, Maria Hill, is actually Talos’s wife, Soren. We then see that the real Fury is actually aboard a spaceship full of other Skrulls, who he is seemingly in command of. There is also a passing mention by Fury of “Kree sleeper cells” on Earth, thus alluding to the fact that the Kree-Skrull War is still being fought.

More and more cosmic stories are definitely planned for the MCU’s future, and these teasers have only served to hammer that point home. How these alien races will actually come into play remains to be seen, but the possibilities are endless.

Another big cosmic Easter egg in the film comes when Peter Parker, on his flight over to Europe, flips through documentaries to watch and sees one with a name that is familiar to comic book fans: Nova.

Nova is another intergalactic superhero who has worked with the Earth’s Mightiest Heroes on numerous occasions. Sure, this connection is a tad bit flimsy, but a Nova film has been rumored to be in production by Marvel for a while now, and with the MCU heading farther into space, this tease is certainly plausible.

Since the events of Captain America: The Winter Soldier, S.H.I.E.L.D.—the government agency that has essentially handled all this superhero stuff—has been dismantled. Various pseudo-incarnations of the agency have existed since then (like Phil Coulson’s team on Agents of S.H.I.E.L.D.), with Fury involved in some capacity in support of the world’s superheroes.

In the comics, S.H.I.E.L.D.’s space counterpart is named S.W.O.R.D., and it serves as Earth’s first defense against galactic threats. With Fury in space with the Skrulls, it looks as if he is either setting up some sort of new defense for Earth or maybe just vacationing among the stars. After all, if anyone deserves a good break from the action, it’s Fury.

As Marvel transitions to more space-based threats, the establishment of S.W.O.R.D. in the MCU only makes sense. Not to mention, getting a massive space station for the Avengers to hang out on like in the comics would be too cool.