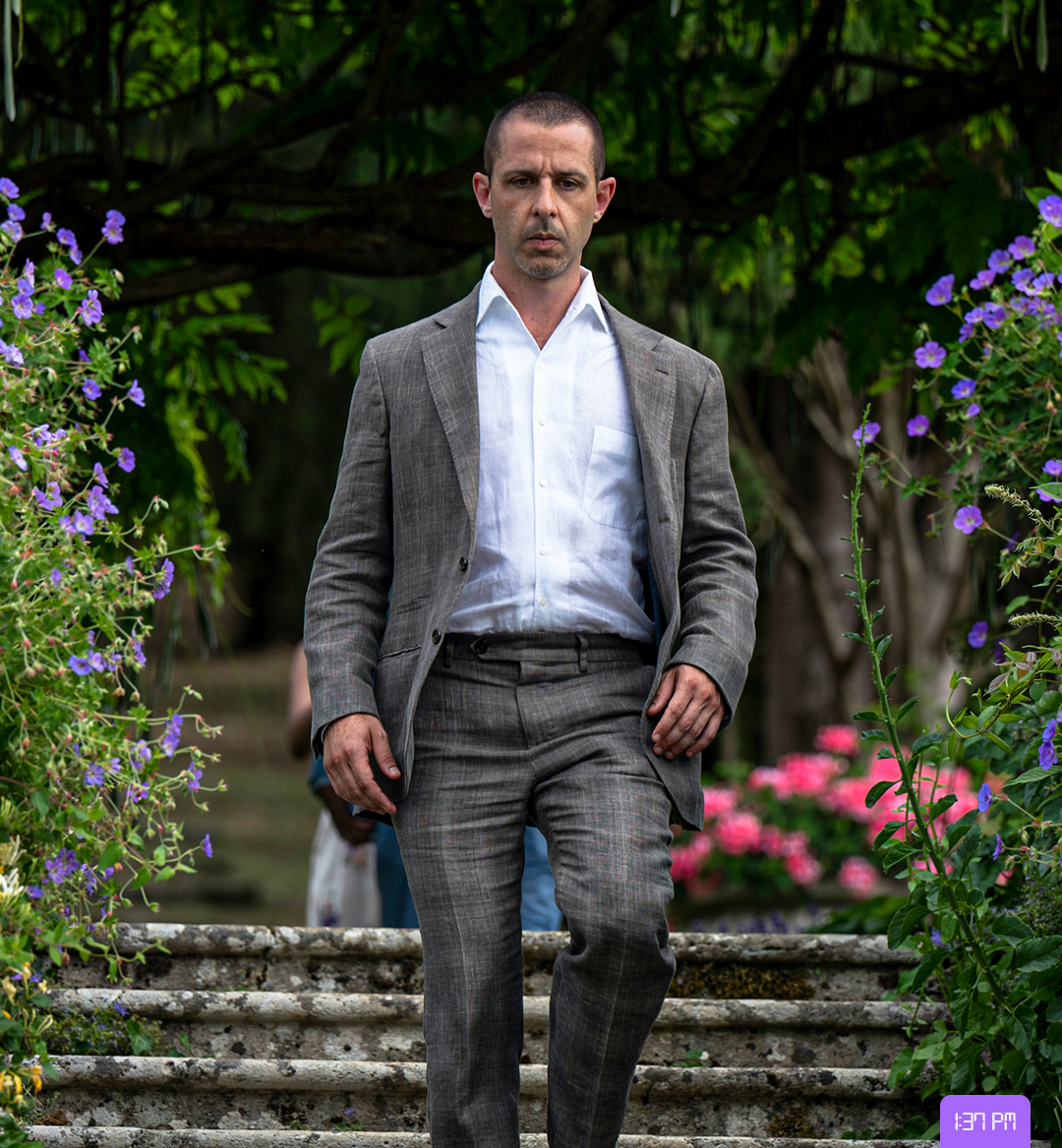 Okay, I know how we're all feeling after this one, so let's get into it. The penultimate episode of Season 3 left us on arguably the largest cliffhanger of the entire show, but there was quite a lot leading up to that fateful moment.

The episode kicks off back in the Waystar offices, with Stewy and Sandy meeting with Logan just before their board member's meeting. Logan finally tells them about the possible Gojo deal, which Sandy feels is an ambush, as they were supposed to be let in on the dealmaking with Waystar. 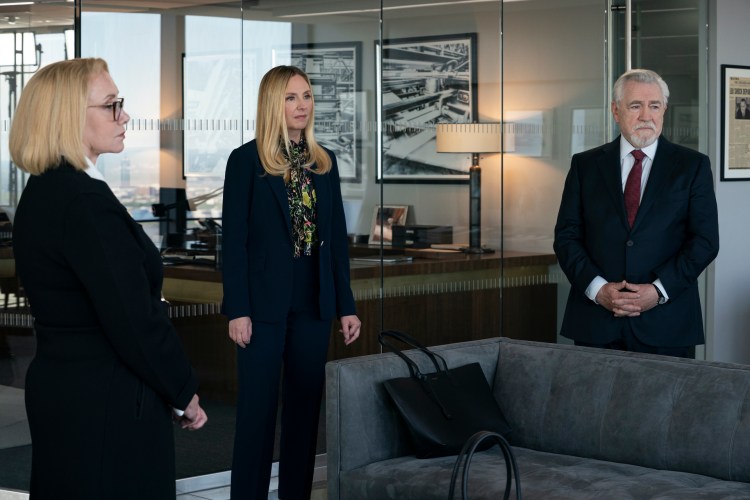 Looking for someone to agree with her, Sandy asks where Shiv is, who is instead calling into the meeting later because she's not feeling great. Because there's nothing that Sandy can really do about the Gojo deal except to back out of the company altogether, they put a pin in things for now and wait to see how the Gojo deal plays out.

Afterward, the family hops on a plane and heads to Italy, where the siblings' mother, Caroline Collingwood (Harriet Walter), is getting married. Although Shiv and Roman are still on bad terms (and still arguing) after Kendall's birthday party, Roman gets serious and tells Shiv that they should confront their mother about whether or not she should actually go through with the marriage. Most likely because Shiv is still upset with Roman, she tells him that she doesn't care, which basically leaves it up to Roman to handle things with their mother.

Arriving in Italy separately from his siblings, Kendall steps out sporting a new buzzed haircut alongside his children, who have come to attend the wedding, as well. Upon greeting his mother, Kendall sounds fairly lifeless and she comments on his tiredness. Caroline mentions that he and Logan will have to divvy up who attends which wedding event, as Logan doesn't want to be near Kendall.

The other siblings arrive after Kendall and Roman knocks on Gerri's hotel room door to see if she wants to head over to the welcome drinks. When he starts chiding her for bringing Laurie (her kind-of boyfriend) to the wedding events, Gerri finally agrees to go with him, but not before she sternly asks him to stop sending inappropriate pictures of himself to her. 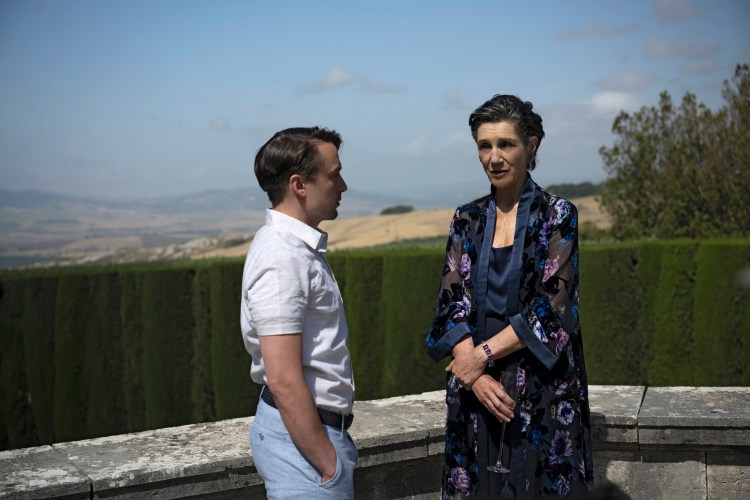 At the welcome drinks, Roman finally greets his mother and launches into questioning her on the details of her marriage and whether or not she should actually move ahead with it. He also asks her if she has a prenup, to which she vaguely says that she has it handled, which doesn't seem very convincing.

With Comfrey along as his assistant for the trip, Kendall asks her if there's anything coming up for him on the business docket, and she mentions that there's a podcast that he's scheduled to be on about the curse of the Roy family. She goes into deeper details about the podcast, including how they'll also be interviewing Connor's mom, as well as talking about the guy Kendall got into the car accident with at the end of Season one. Comfrey's mentioning of this obviously jars Kendall, and he asks her to keep tabs on the podcast.

Following her chat with Kendall, Comfrey walks up to Greg and kisses him on the cheek, but after she walks away, Greg chats with Tom and Shiv and says that he's been having second thoughts about her. He also asks them if there's "any substance there" with regard to Comfrey and is worried that she won't stick around after she gets to know the "real" Greg.

Being that Mattson is a bit of a loose cannon, he sends out a few crazy tweets that immediately worry the Waystar team, prompting them to get in contact with him out of fear of him screwing up the deal. Shiv feels that Mattson could be playing Roman as he's not taking any of the team's calls. 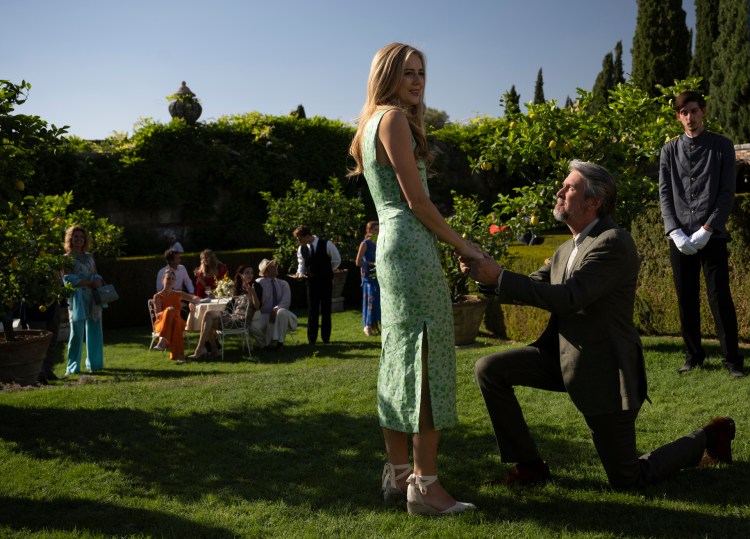 After telling Willa that a reporter might be digging into her past, Connor all of a sudden asks her to marry him out on the lawn in front of everyone, but given that she's not sure, they both pretend like she says yes. Connor tells her that she can have more time to actually think about it, and it's clear that Willa needs that time.

Arriving at the party with Marcia, Logan immediately asks Roman about the situation with Mattson. In the middle of this conversation, Kendall starts walking towards Logan, but Roman makes a physical barrier between the two and Kendall yells past him to his father. He wants to meet with Logan later that night to finally talk things out, but it's unclear if Logan will actually show up. 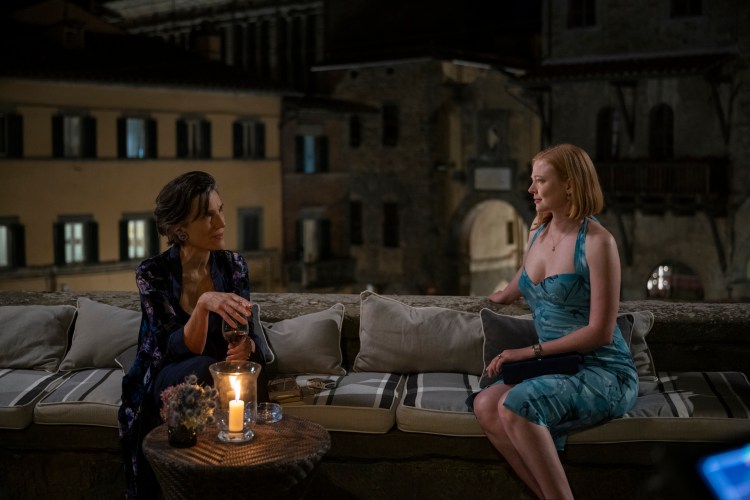 At another wedding event that night, Shiv gets some alone time with her mother and decides to ask her if she has an air-tight prenup, and again, Caroline is vague about it. Since the two have always butted heads, they take jabs at each other, with Caroline admitting that although she wasn't a great mother, Shiv was an awful daughter. Caroline also adds that she should have never had children and applauds Shiv for making the right decision about not having kids with Tom.

Although Mattson won't take Logan's calls, he leaves voice memos for Roman where he claims that he was just messing around with the tweets. However, this doesn't go over too well with Logan, who feels that Mattson is trying to humiliate him. Because of this, Gerri asks Roman to meet up with Mattson in person and settle things.

Though he wasn't sure if his father would show up, Logan arrives at Kendall's dinner/discussion, where he's concerned about being poisoned with the food that Kendall has planned to serve. Given this, Logan asks Kendall's son, Iverson, to try a bit of his food just to see if it was actually poisoned or not.

After Iverson leaves, Kendall and Logan have a conversation that goes much longer than expected given their current relationship. Right off the bat, Kendall tells his father that he wants out of the company and wants to go for the $2 billion that was offered to him via his birthday card. Logan says that he'll think about it, as he might want to keep Kendall close to him.

Kendall gets as honest as we've ever seen him in this conversation, stating that he doesn't know where his life goes from here and admitting that he couldn't change Waystar in the way that he wanted to—that there are things Logan can do that he just simply cannot. He also says that Logan has won, but only because he's corrupt, as is the world at large.

In response to that, Logan reminds Kendall of all the messes he has cleaned up for him in the past, including the guy drowning in the lake from Season one. "And I'm a bad person?" is what Logan finally says to Kendall before getting up and leaving. 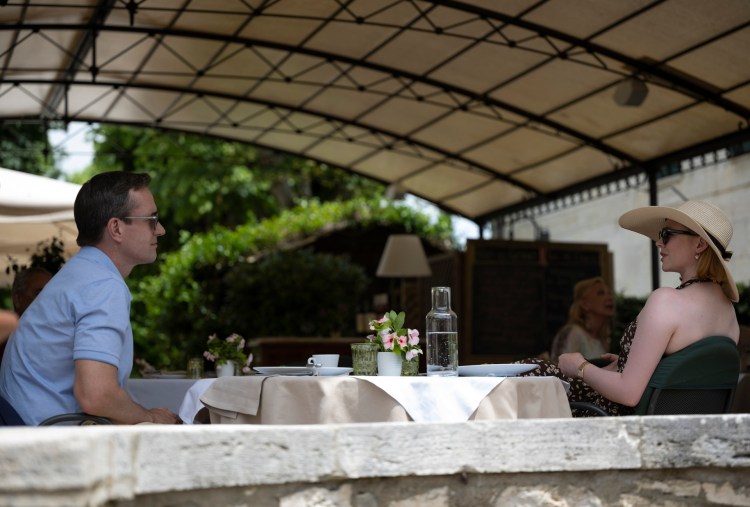 Back at their hotel room, Shiv tells Tom that she wants to have a baby, most likely because of what Caroline said to her just prior to this. Additionally, Shiv starts seductively talking to Tom, but the content of what she's saying to him involves her not loving Tom, among other things.

The next morning, Tom is clearly upset over Shiv's remarks and brings it up to her, asking what was real and what wasn't. He's worried that she doesn't actually love him and if maybe he should actually start listening to what she says to his face. Tom also asks Shiv if she's still serious about having a baby, and though she initially reassures him that she is serious, she launches into a whole thing about freezing embryos for 10 years. As she goes further and further down that line of thinking, Tom realizes that she's not actually serious about it. 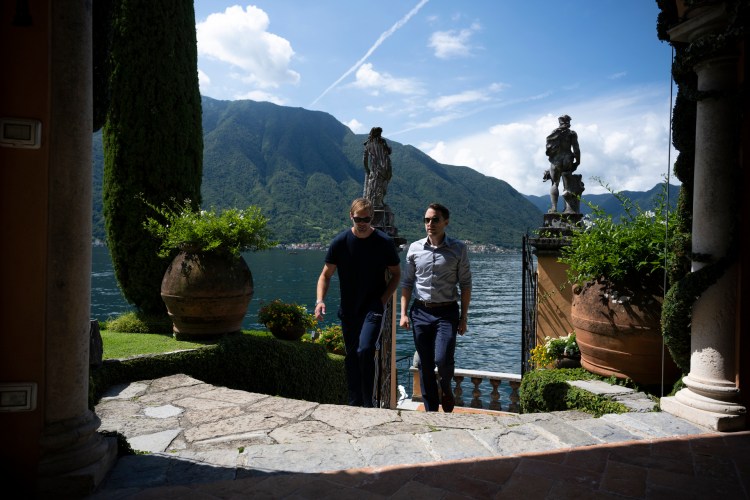 On a different note, Roman flies over to Mattson's home, where he's finally able to confront him over the tweets, which Mattson doesn't really have any good explanation for. Ultimately, Mattson says that he wants a merger of equals, not for Gojo to be an acquisition.

As the Waystar crew heads to Milan to meet with the bankers about their possible deal with Gojo, Roman heads in straight from Mattson's. He encounters Gerri in the hallway, where he tells her that the deal is probably over because of the fact that Mattson wants an equal merger.

In the meeting room, Logan wants a sense of where things stand with Mattson, and after Roman tells him what went down, Frank (over Zoom) says that it would be a large upheaval to do an equal merger. Despite this, other members of the team feel that they could still keep control with the merger, as they think it's important to take the deal given Gojo's relevancy in the media landscape. With that said, Logan asks to bring the bankers in, meaning that he has decided to make the deal with Mattson.

Gerri sends Roman a text congratulating him for a job well done, and in response, he sends her another inappropriate picture. The only thing is he ended up sending it to Logan instead, who promptly leaves the room and calls for a five-minute break. Shiv follows her father out of the room and tries to convince him that it's not just a "Roman thing," but that it's instead a larger, potential problem. She also tells him about the weird situation between Roman and Gerri; all of this is fueled by the fact that Shiv wants to get back at Roman.

As Shiv leaves, Logan screams for Roman to come in, where he asks if he's a "sicko," before calling him a laughing stock. Because of this incident, he's considered firing Gerri, which Roman advises against, as it's not her fault. 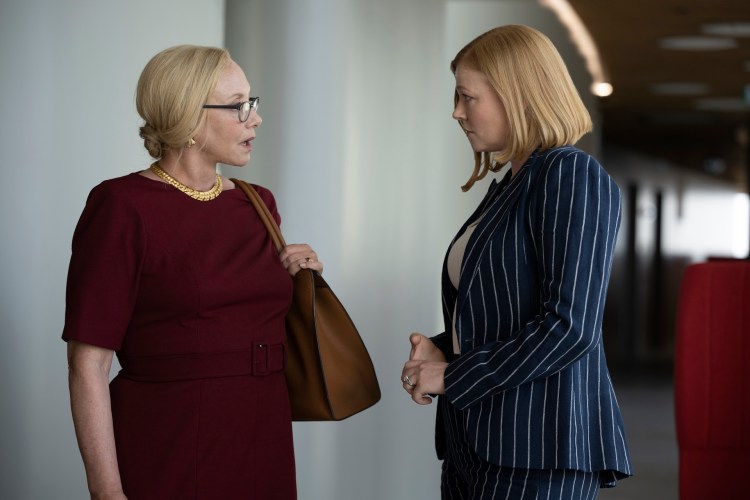 In the hallway, Shiv tells Gerri about the situation and asks her questions about it, claiming to be on her side and asking her to report Roman to HR. Gerri can clearly see through this act, knowing that Shiv just wants to get back at her brother and that she doesn't actually care about her well-being.

As all of this is happening, Kendall is back at the hotel with his kids hanging out at the pool, though his kids decide to head back inside. Kendall's lying face down on a pool float with a beer in his hand, at first looking like he's relaxing, but then his eyes close and his beer drops into the pool. As his beer slowly falls to the bottom of the pool, his nose dips slightly underwater. And this is the scene that we're left with.

For a whole week.