Just How Presidential Are The Rock’s Sushi Sunday Meals? 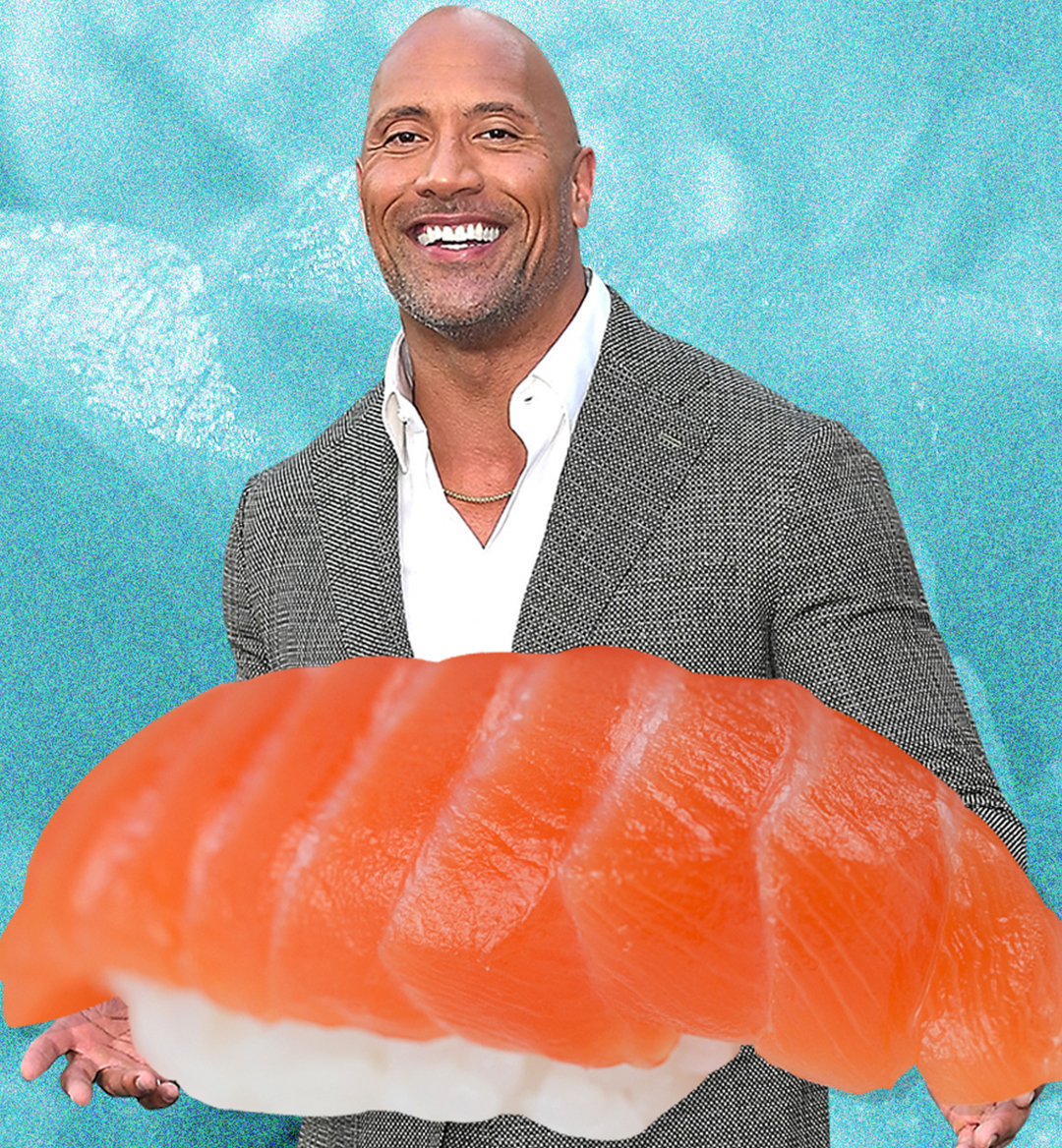 Sandwiched between Instagram snaps of Dwayne "The Rock" Johnson high-finning a beluga whale and bench-pressing a scrapyard's worth of iron sits an innocuous photo of some sushi in front of a laptop. The screen is open to a streaming service. He's about to sit down and soak in a documentary with a buffet of sushi. It's probably one of the most familiar images for workaday millennials everywhere: What to order on Seamless and what to queue up on Netflix?

I can't find when The Rock started posting "cheat meals"—which I have gathered through some clever Googling means "food that he eats to spice up his quotidian diet" of, according to ABC News, "an egg-white omelet or chicken breast and some rice." Snore. I know that many celebrities who have to gain muscle mass, the famous four Chrises come to mind, eat sad diets of boiled chicken breasts and steamed broccoli. But a cheat day, I would wager, should include a family of four carb-load meant to offset the low-level depression experienced by necking back a daily cocktail of egg whites.

Many of the preliminary entries on his #CheatMealSunday posts were stacks of pancakes, seemingly garnished with a slab of peanut butter and a healthy pour of Organic 365 maple syrup, sometimes topped with chocolate chips. All were accompanied by a Netflix documentary of some sort. It looked kinda gross. Like, sorry IHOP, but no matter how you style a stack of pancakes, they look like spheroidal disks of despair.

This may seem unimportant to the layman. But I, a political food sleuth, have taken the liberty to assess these meals based on their potential to launch a presidential bid. Not to place too much importance on a meal, especially ones that look like heart attacks waiting to happen, but even his worst #cheat meals look healthier than our current Prez’s best. Sad! So let us now evaluate, via arbitrary criteria, the kinetic energy of his meals and how they, ahem, stack up to past presidential competition.

“Tried this new soosh spot that was a recommendation from my new best friend, Stanley Tucci,” The Rock captioned this photo of give or take 60 bites of sushi distributed over three plates. I suppose Tucci and The Rock met on set of his angry gorilla blockbuster, Rampage, and talk naturally turned to good sushi spots between takes.

This was The Rock's second watch of Won't You Be My Neighbor?, a documentary about a man whom he praised as "one of the most kind, compassionate, caring & steadfast human beings to ever walk God’s green earth."

VERDICT: A president with Stanley Tucci on his speed dial? That is at least six nigiris out of a possible ten. Also, imagine a president who calls it "soosh." Soosh, there it is!

Emily Blunt recommended whatever sushi spot The Rock ordered from here. We're going to quietly applaud The Rock for taking food recs from a majority of the cast of The Devil Wears Prada, but on this particular night the future prez dug into the four-part HBO series about producer Jimmy Iovine, The Defiant Ones.

VERDICT: That's some quality watching and he followed it up with his signature peanut butter cookies (more on this later). This is a solid eight nigiris out of ten. In the words of The Rock paraphrasing an unattributed quote he heard in his early days that is now attributed to The Rock, “Once you’ve been hungry, you’ll never be full.”

OK there is no sushi in this picture, which is slightly deflating because I thought we were only cheating with quasi-healthy grub. According to the Globe and Mail, sushi is "a good source of heart healthy omega-3 fatty acids thanks to the fish it's made with. Sushi is also low in calories—there's no added fat."

But what this photo lacks in raw fish it more than makes up for in explosive carbs and proteins. For someone who occasionally suffers from food eyes—the culinary counterpart to Audrina Patridge's ceiling eyes—there is just too much to look at.

Luckily, there's an explainer in the caption: These are "Double milk chocolate and peanut butter chip cookies with creamy peanut butter smothered between the two cookies. The camera angle makes these nuggets look small, but they’re huge. How are they you ask? Well, they’re just like my nickname after I drink tequila—Big, tasty & heavenly."

VERDICT: Holy jalopy, how do I make these? Is there a recipe @therock? I already forgot about sushi, we just need this recipe. This is nine nigiris out of ten. Where is my nearest polling booth?!

I just needed to throw back to this pre-sushi train #CheatDay meal. First of all, this looks like a weird nude you'd send to someone who watches those breadface videos on YouTube. Beez in the trap! Carbs on my lap!

Can I also point out how disappointing this is? The pancakes are melting off of the sides of the plate. If you even so much as splashed a bit of syrup on them, it would certainly drizzle onto your crotch. Nobody wants maple syrup in or around that area… Do they?

VERDICT: This is boring to look at unless you like feet. There is not a nigiri in sight and it's equivalent to the sad photo of Trump on Air Force One in front of some KFC. Not my president!

Bury me with a copy of The Zen Diaries of Garry Shandling on DVD. Or Southland Tales, one of the most unsung on-screen appearances for The Rock.

With this more recent post, we're back to sushi, and these rolls boast more color than a New Orleans pride parade on Shrove Tuesday, a holiday we're sure The Rock celebrates. Based on that cursory observance, I would hazard a guess as to say The Rock is supportive of the LGBTQ community. The veracity of that statement is confirmed in the caption, wherein he clearly voices his support by saying: “So the take away here, is be you. And don’t cheat yourself, treat yourself—crush your cheat meals.”

VERDICT: Wow. That is already leagues ahead of what many past presidents have said re: the gay agenda. I'm proud of what The Rock signifies, both in the film world and the culinary realm. And if anything can be gleaned from his sushi orders, it's that The Rock is unfailingly a vote for pro-choice and the dismantling of a capitalist stronghold on contemporary American society. Phew! That was a lot to get through. Time to order some sushi. ?