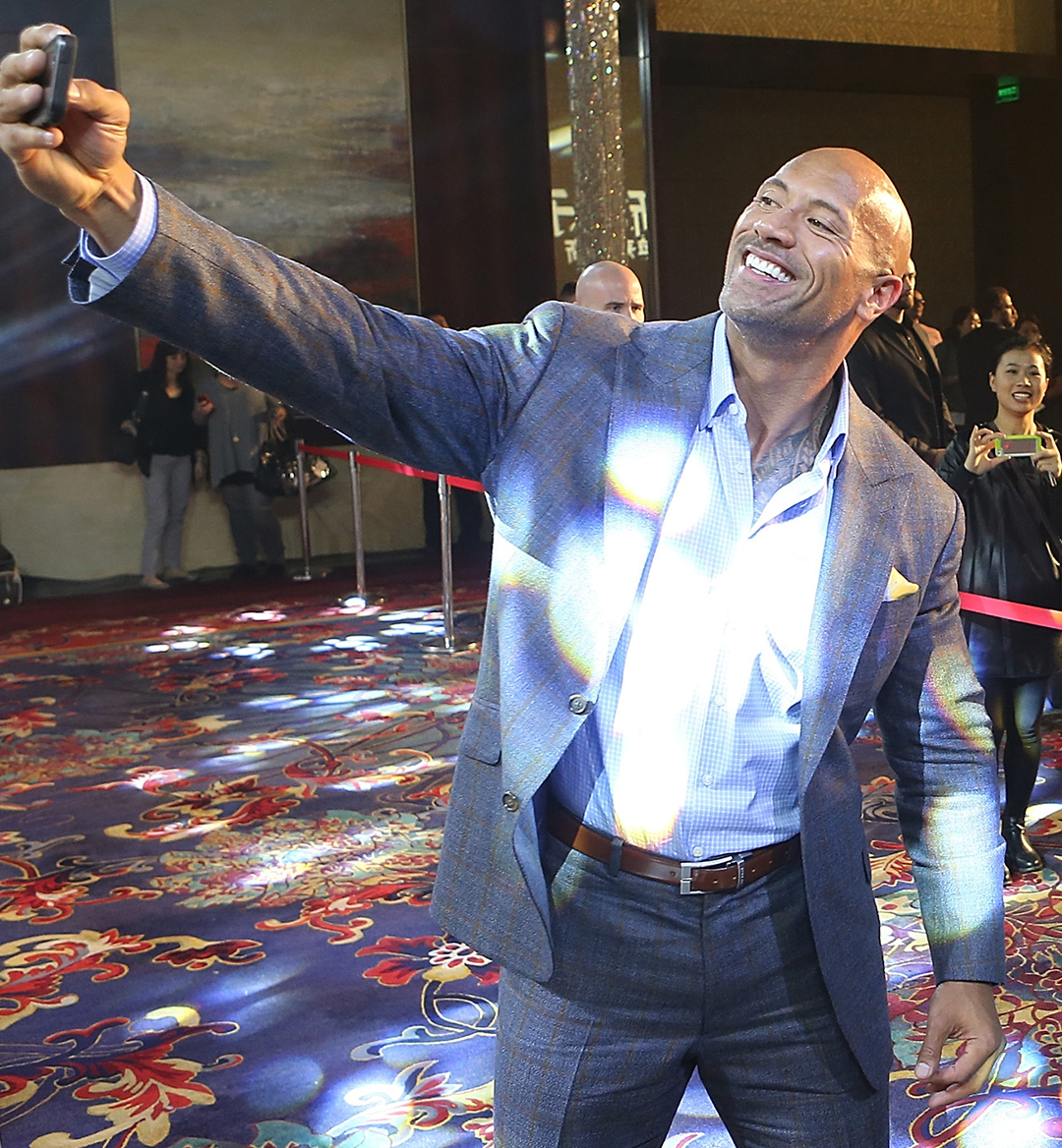 Imagine your favorite celebrity sliding into your DMs, randomly sending you direct messages on Twitter or Instagram to brighten your life.

If you could have *one* celebrity slide into your DMs, who would you pick?

Well, that’s exactly what happened to Ohio resident and ONE37pm Twitter follower Summer Silvery. Once upon a time, the 26-year-old illustrator received DMs from Dwayne “The Rock” Johnson regarding her artwork.

He already did ?? Dwayne Johnson hung my illustration up in his movie trailer ?❤️ pic.twitter.com/8hEQqTY5We

Epic, right? Naturally, we were curious about how this interaction started, so we interviewed her about her experience DMing with The Rock, what led to it, how she felt and whether the two still talk. Here’s the lowdown on The Rock sliding into her DMs.

How did your interaction with The Rock begin? Offline? Online?

Summer Silvery: A few years ago, I decided to take a chance and become a digital illustrator full time. I had no credibility to my name in the art world; all I had was high school and college customer service jobs. So I came up with the idea of creating illustrations for companies and public figures for free and just pumping them out on social media. I’d do a ton of research on the brand or person I was making the illustration for, put my push notifications on SM and then pump the work out as soon as I saw they were on. I paid a lot of attention to Dwayne Johnson specifically because of how big his heart is. I knew I needed to make him an illustration that was meaningful. In September 2017, Dwayne made a post and I sent out a tweet with my illustration. He retweeted it, followed me and then a day later sent me a long message via DM. That was our first interaction. 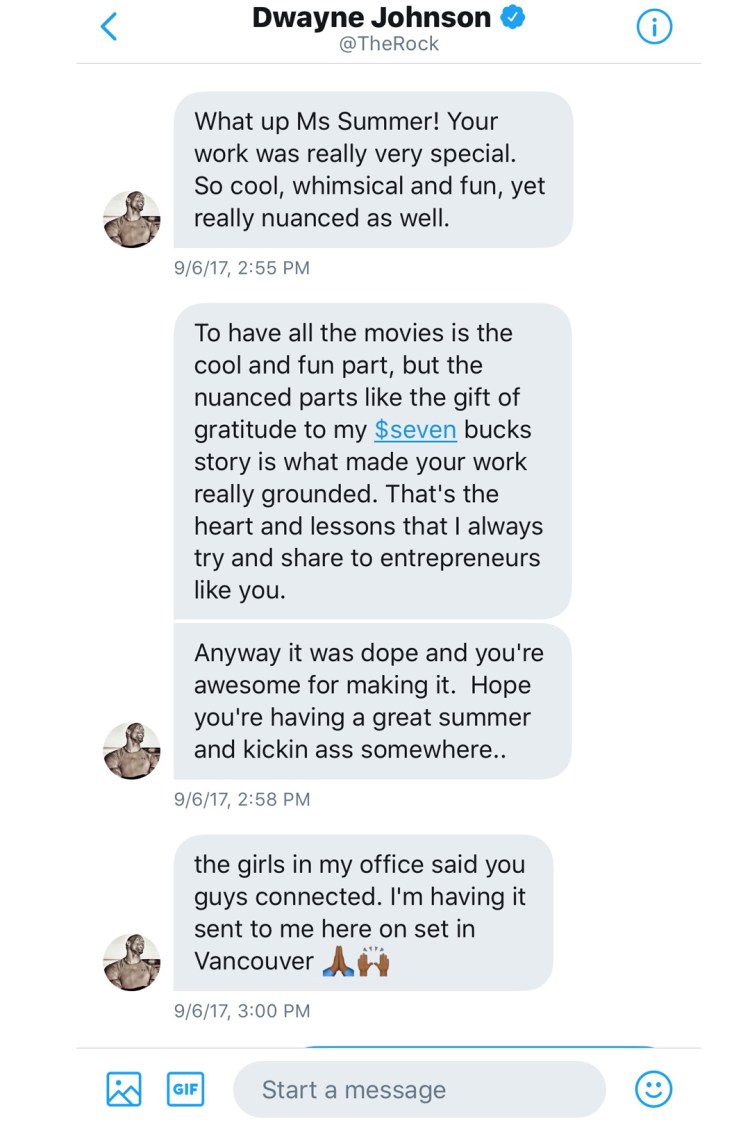 Why did he hang your art? And how did he get it in the first place?

Silvery: The Rock hung my art because it was meaningful to him. I had created a collage of every movie he had been in, with the year attached and alongside a couple other details that make The Rock The Rock. The part that meant the most to him was his quote I had written in the top left-hand corner of the illustration: “1995. $7 bucks in my pocket. I knew two things: I’m broke as hell and one day I won’t be.” That’s a huge piece of his story, and it meant a lot to him that I had added it within the illustration. His assistant contacted me about sending it to them and where to send it.

Do you know what movie he was filming when he hung your art in his trailer?

Silvery: He was on the set of his movie Rampage in Vancouver, Canada. 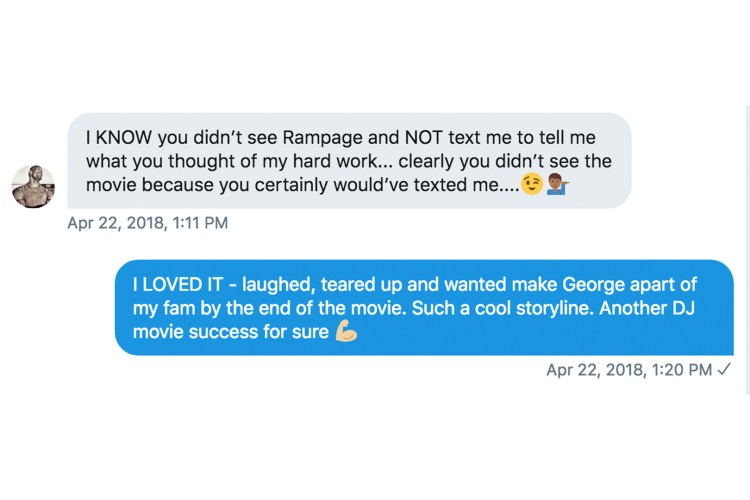 I was blown away. As an artist, it’s the biggest compliment in the world to have someone appreciate your work enough to hang it

How did his hanging your art make you feel? What was your response to him?

Silvery: I was blown away. As an artist, it’s the biggest compliment in the world to have someone appreciate your work enough to hang it. And to have Dwayne Johnson hang it up…well, that’s a whole other level of flattery! Very grateful and appreciative.

Do you and The Rock still DM each other?

Silvery: September 2017 was our first time talking. January 2018 was when he sent a picture of the art hung up in his trailer. And April 2018 was the last time we messaged. 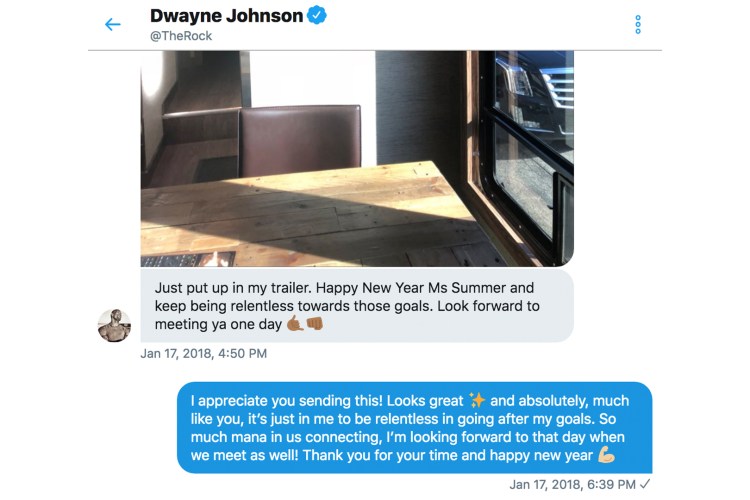 If you could have another celeb slide into your DMs, who would it be and why?

Silvery: It would definitely be Will Smith. I love his heart and everything that he’s about. He uses his platform for good and has the best energy. I’ve made him a few illustrations that he hasn’t seen yet. He’s also coming out with a children’s book called Fresh Princess. To help illustrate that would be insane.

Have other celebrities or high-profile people hung up or bought your art?

Silvery: (Laughs) Gary Vaynerchuk has my illustration up on his #GaryVeeWall.

3 out of the 4 things listed below, I did not have. But lucky #4 is what got my illustrations up in @TheRock ‘s movie trailer & on @garyvee’s #GaryVeeWall ???✨

Anything else you would like to add about The Rock, your art or your interactions?

Silvery: Three years ago, I had no credibility to my name. I didn’t go to school for art, I don’t even have a degree, I dropped out of school. I work on an iPad Pro and I’ve made that thing a part of me every day for 10 to 15 hours a day for the last three years. I’m saying this because of the amount of people who stop before they start purely because they think they don’t have the “schooling” for it. Anything can happen if you work hard enough for it.