The "Star Wars" Galaxy's Most Feared Bounty Hunter: Who Is Boba Fett? 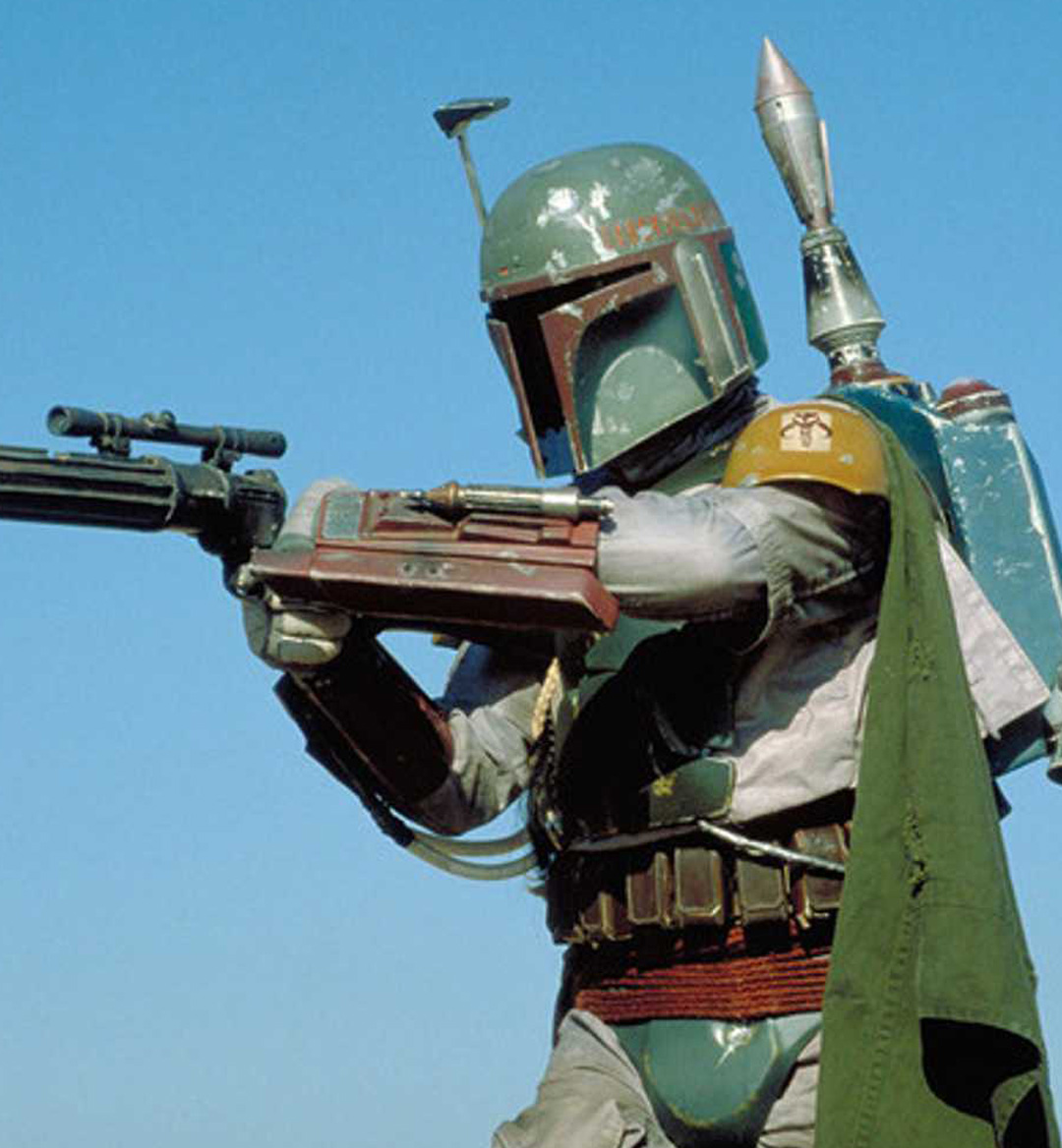 Boba Fett is a name that you're probably familiar with, even if you're not a fan of the Star Wars films. He is the galaxy's most infamous and feared bounty hunter, one in the service of the Empire in the original films, and who seemingly meets his grim demise at the hands of the monstrous Sarlacc in Return of the Jedi.

He's only onscreen in the original trilogy for a grand total of six minutes and speaks only four lines throughout two movies, but Boba Fett has etched his name into legend. Technically you can count a brief cameo in A New Hope as well, but he was a last-minute addition to the film, and only appears in the rereleased version of the original movie.

He has transcended his limited screen time and become one of the most beloved characters in all of Star Wars.

So, who is Boba Fett?

Boba's origins can be traced back to the planet Kamino, the home of the Republic's clone army, led by the Jedi to fight against the Droid Army of the Confederacy of Independent Systems in the Clone Wars.

The clones were created using the gene template of the bounty hunter Jango Fett, who is Boba's "father." Boba is just another clone of Jango, albeit one with no accelerated aging, unlike the clones of the Republic's army.

Boba traveled with his father to the planet Geonosis, where he witnessed Jango's death at the hands of Jedi Master Mace Windu during a battle. In the prequel films, the last time we see Boba is him clutching his father's helmet in silence.

Boba would return in the prequel animated series Star Wars: The Clone Wars, where he secretly infiltrated a Republic starship hoping to kill Mace Windu and enact revenge. He would fail in this mission, evading capture at first but tracked down by Jedi Knights Plo Koon and Ahsoka Tano.

He was sentenced to serve a prison sentence on Coruscant but would eventually escape and begin his career as a bounty hunter. Boba would encounter characters like Bossk and Dengar, fellow bounty hunters who were initially introduced in Empire Strikes Back, during his young career.

Flash forward to the events of that film, and Boba is searching for Han Solo and the Millenium Falcon, hoping to cash in on a bounty put out by Jabba the Hutt. Working with Darth Vader and the Empire, he tracks Solo to the Cloud City of Bespin, where he captures him and delivers him to Jabba on the planet Tattoine.

In Return of the Jedi, Boba is still working with Jabba at his palace, where he does battle with Luke Skywalker and his allies on Jabba's barge. A blinded Han Solo damages his jetpack, and he crashes on the sand, falling into the mouth of the awaiting Sarlacc beast.

Prior to Disney's purchase of Lucasfilm, it had been revealed that Boba had actually escaped the Sarlaac pit and survived his encounter. He had been nursed back to health by Dengar and returned to service as a bounty hunter.

He would go on to have a variety of adventures including a few more run-ins with Han Solo, as well as his son and daughter. These tales were all told across a variety of books, comic books, and short stories but have since been removed from the official Star Wars canon following Disney's purchase of Lucasfilm.

Have no fear Star Wars fans, as Boba made his triumphant and surprise return in season two of The Mandalorian, where he tracked down the title character, Din Djarin, who had come into possession of Boba's famous armor.

Played by Temeura Morrison (who also portrayed Jango Fett,) he had been hinted at in season one, where he appeared as an unseen person who rescued bounty hunter Fennec Shand, who had been gravely injured in a fight with Djarin. Fett and Shand allied themselves with Djarin and helped him fight off Empire stormtroopers. He also helped with a mission to infiltrate an Empire facility and transport Djarrin, Fennec Shand, and their allies to an Empire vessel where "The Child" was being held.

In a post-credits scene of the season finale, Boba and Shand reappear at Jabba the Hutt's palace on Tattoine which has been taken over by Jabba's lieutenant Bib Fortuna. Boba kills Fortuna and takes the throne, leading into the spinoff series The Book of Boba Fett.

The Book of Boba Fett will undoubtedly explore what happened to Boba in all the years in between Return of the Jedi and The Mandalorian.

The Book of Boba Fett premieres on Disney Plus on December 29th.