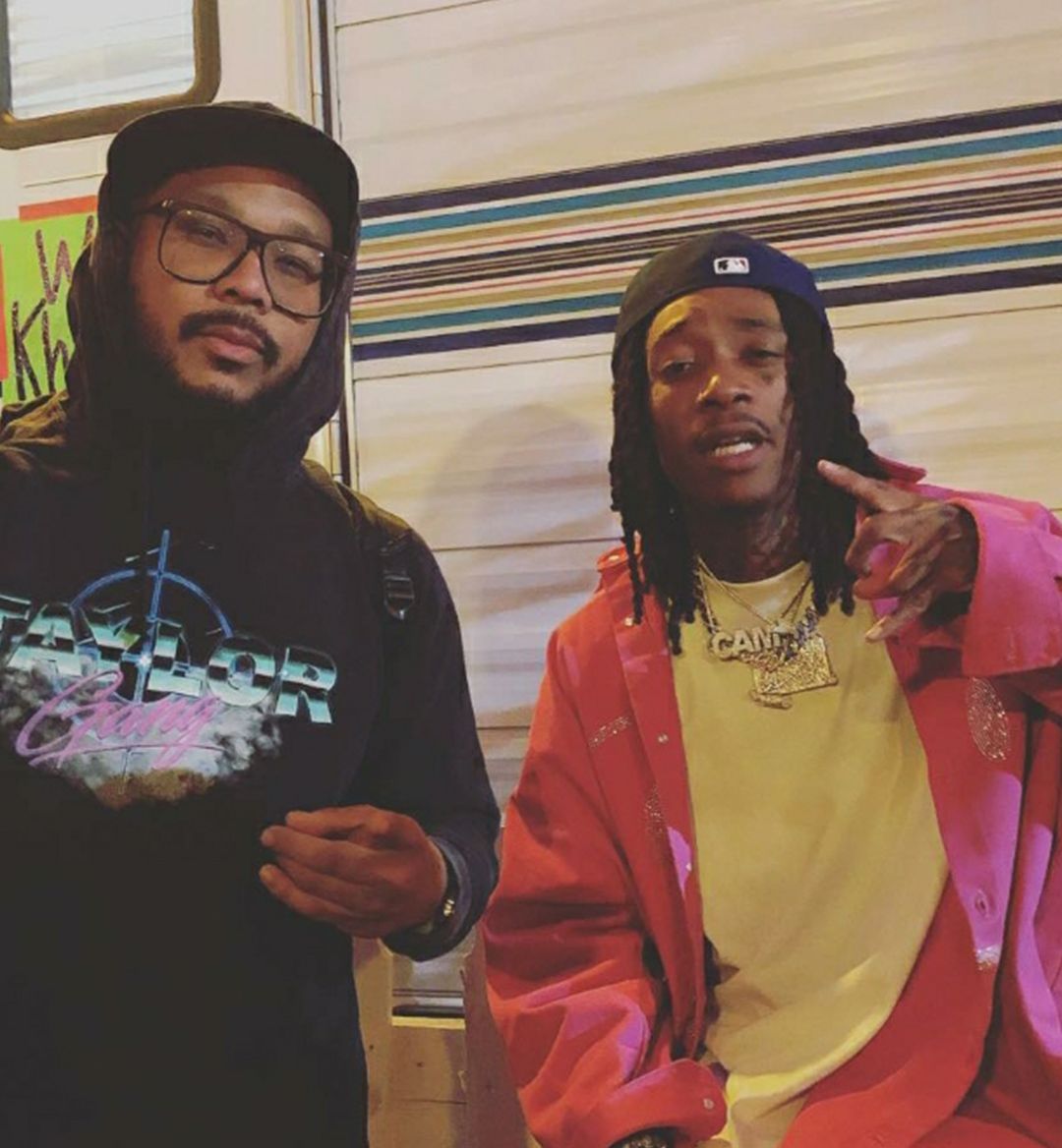 There comes a time when you have to make tough choices in pursuit of your dreams. Will you stay at your full-time job or quit to go on the road with a rising artist? Will you recover from a heart attack or appear on national television with that artist? In the past decade, Brandon “DJ Bonics” Glova has done all that as DJ for Wiz Khalifa.

But don’t get it confused. Before Cameron Jibril Thomaz became Wiz Khalifa, DJ Bonics was DJ Bonics. The 38-year-old has been deejaying for decades, was the No. 1 afternoon jock and music director at KISS-FM 96.1 in Pittsburgh and made a name for himself at DJ competitions well before he began working for the then-unproven star a decade ago.

Fast-forward to 2019. If you want a good measure of where Bonics is right now, you just have to listen to his version of the national anthem. At a Minnesota Twins game this past June, Bonics used his turntables to splice together different renditions of “The Star-Spangled Banner,” which is often performed by singers, not DJs, at sporting events.

“From Whitney Houston to Jimi Hendrix to Michael Bublé to John Legend, all of those are included, where I cut it line for line and drop it as sort of a collage,” Bonics told ONE37pm. “I think what makes this country what it is is a melting pot of sounds, approaches, colors and creeds.”

Last week I did something I think may never have been done as far as Djing. I “dj’d” the National Anthem. I know that 35,000 people saw something that they never seen before. Thanks for the @Twins for the opportunity ! ‘Merica ! #GoBonics https://t.co/plpzeo6r3y pic.twitter.com/W5ipwgIQ7G

How exactly did Bonics land this gig? “Last year at some point, I sent [the owners of the Twins] this idea of deejaying the national anthem, and they were like, ‘The national anthem was all booked up this year, but let’s talk about doing it next year.” That talk happened, and the rest is deejaying history.

Where It All Began: Wiz and a Heart Attack

After Bonics completed Wiz’s 55-date Waken Baken Tour in 2010 and returned home to deejay a few shows in December 2010, he realized he couldn’t take a deep inhale. “I was nervous, like, ‘Oh my God. I just got off tour with Wiz Khalifa. I can’t breathe. Did I smoke my lungs out?’ That’s literally what I was thinking about,” DJ Bonics said, adding that going to the doctor became a concern because he had lost his health benefits after he left his full-time job at KISS-FM 96.1 to DJ for Wiz.

After getting a chest X-ray at a free clinic, he was sent to the hospital. The good news was his trouble breathing wasn’t connected to his smoke sessions with Wiz. The bad news was everything else. “The [doctor] goes, ‘Mr. Glova, you had a heart attack this morning. You have to go into surgery right now, and we have to give you a stint because you have 99% blocked arteries.’ One of my main arteries was 99% blocked,” Bonics recalled.

10th summers with Wiz! When you approach a process with love you’ll never be let down. Thank you to @wizkhalifa . Thank you for trusting me to be apart of your journey. And together we went through the process with Love and we are still going and growing. #GoBonics pic.twitter.com/62oSbSvir1

The Texas Heart Institute says recovery time for a mild heart attack usually takes anywhere from a few weeks to three months. Three days into his recovery, after having a successful surgery, Bonics was asked to deejay Wiz’s performance of his hit single “Black and Yellow” on BET’s 106 & Park in December 2010. It was Wiz’s first major BET performance. Bonics said yes. After that performance, Bonics took a break from smoking weed—until Snoop Dogg invited him and Wiz to his compound. “He passed me the joint and I was like, ‘Fuck it.’”

Bonics putting his life on the line to deejay for Wiz has seemingly paid off because his life changed after he did so. He’s deejayed on the Late Show with David Letterman, seen people in Africa wearîng Pittsburgh Pirates hats because of Wiz, deejayed at most of the major music festivals and helped touch people around the world with music. Bonics attributes Wiz’s ubiquity to more than where his songs land on the Billboard charts.

“[Wiz] represents a culture. He doesn’t need a No. 1 song to tour all summer because he’s part of the [marijuana] culture,” Bonics asserted. “We’ll go anywhere around the world and you have a safe space to smoke and watch a Wiz Khalifa show.”

With the legalization and, more important, normalization of the marijuana culture, visibility is tricky but essential for growing brands. It’s hard to get around legal restrictions with marketing marijuana until you get your product into hip-hop, where smoking weed is so normalized it’s surprising it’s not an official subgenre of hip-hop. Wiz already has his own marijuana business named after his own strain, Khalifa Kush. But when you’re as revered in the marijuana culture as Wiz is, people would do anything to be able to say Wiz smoked their weed.

“The weed comes to him. Even in countries where it’s supposed to be mega illegal, the weed is coming to Wiz. It’s everywhere we go,” Bonics said.

Wiz doesn’t just attract eager THC pushers with his star power. Bonics recalls hanging out with pro athletes. Recently, he and Wiz partied with LeBron James at Drai’s Nightclub in Las Vegas hours after the three-time NBA champion superstar for the Los Angeles Lakers learned out he missed out on coveted free agent Kawhi Leonard.

“I experienced an earthquake and met LeBron James on the same day. He shook my hand and said, ‘I saw you do your thing up there, big dawg.’”

As for his health, Bonics said he’s going to try to stay away from meat this summer, eat a plant-based diet and still run a few miles. He is currently on the Decent Exposure Tour with Wiz Khalifa, French Montana, Playboi Carti, Moneybagg Yo, DJ Drama and Chevy Woods. If you’re able to catch one of these shows, expect it to be a trademark Wiz Khalifa experience.

“You get a safe space to smoke weed and listen to good music.”