“It was a dream come true” 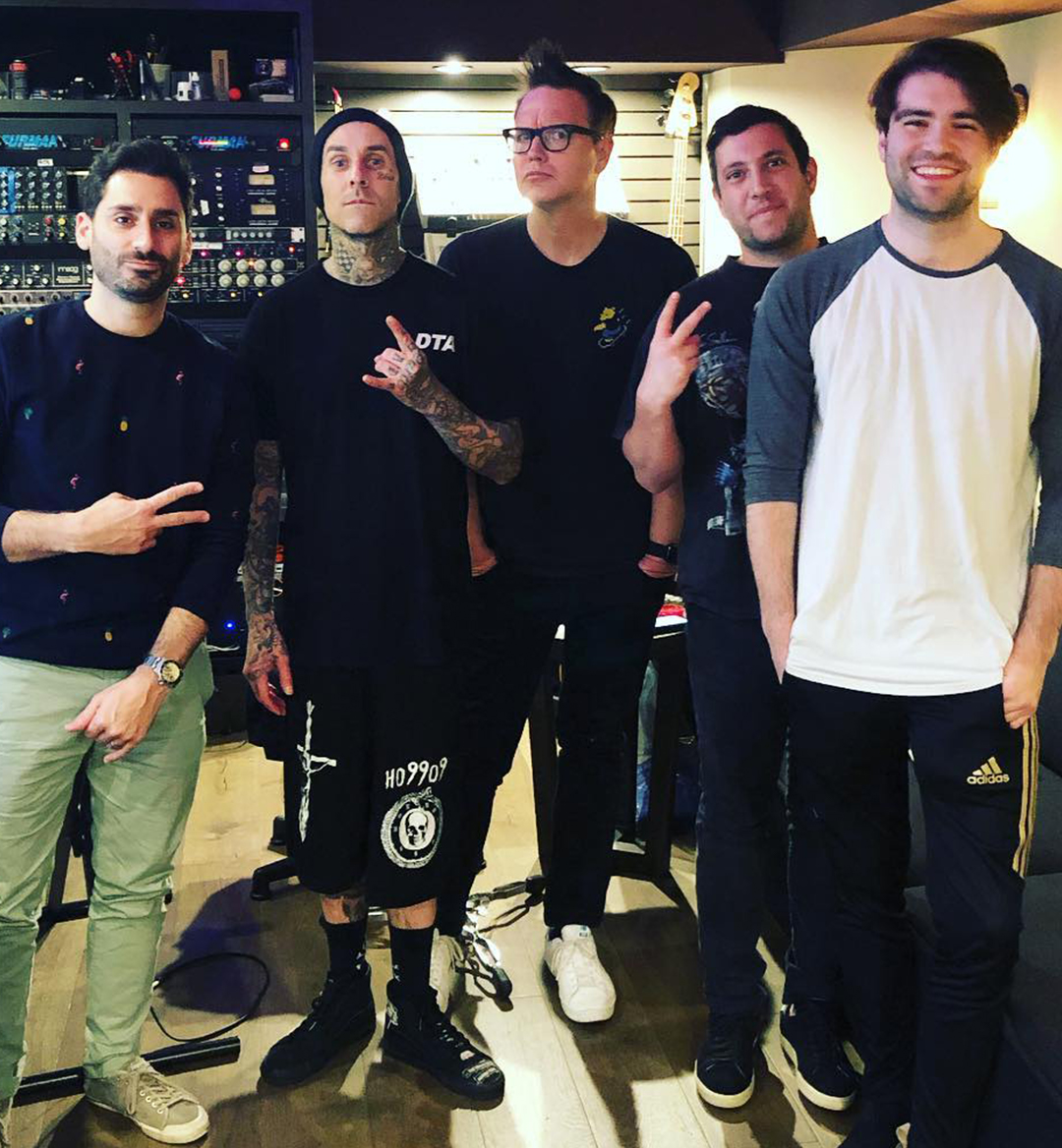 You have to accomplish quite a bit in life for these career moments to not be your defining accomplishments: an Emmy nomination, a Saturday Night Live gig and collaborations with Justin Timberlake and Lady Gaga. The Futuristics—the production duo made up of Alex Schwartz and Joe Khajadourian—accomplished all of these things in one fell swoop when they produced The Lonely Island’s comedic song “3-Way (The Golden Rule),” which featured Gaga and JT for an SNL Digital Short in 2011.

The duo is certainly grateful for the experience, but they have since developed a resume that would dwarf that SNL glory. “It was a nice little bragging right, but it wasn’t much for us. We wanted to keep making music and get some top Billboard records,” Khajadourian told ONE37pm.

Schwartz and Khajadourian have good reason to feel that way. A year after the SNL stint, The Futuristics reached No. 1 on the Billboard rap charts in 2012 with Flo Rida’s “I Cry,” and they’ve scored hits with Selena Gomez (“Fetish,” featuring Gucci Mane) and Machine Gun Kelly and Camila Cabello (“Bad Things” and “Something’s Gotta Give,’ respectively) over the years. “I Cry” was on Billboard’s Hot 100 for 20 weeks, four years before streaming revenue overtook revenue from digital downloads and physical sales for the first time ever. “That was in the day when people still bought a lot of music on iTunes and people weren’t really streaming,” Schwartz said. “Over Christmas, the song was doing well, and I remember they told us it did like 1 million downloads on just Christmas Day.”

Even with the industry ever-evolving, The Futuristics always seemed to live up to their name, staying one step ahead of the trends. Months after “I Cry” became a mainstay on the charts, the duo produced Wiz Khalifa and 2 Chainz’ “We Own It”—the theme song for 2013’s Fast & Furious 6, the first film of the franchise to surpass $750 million and put the franchise on the trajectory to becoming a behemoth. The Futuristics’ multiplatinum theme song played no small part in that.

The duo spoke with ONE37pm about their Saturday Night Live appearance, their Emmy nomination, their work with Blink-182 (“heroes”) and Camila Cabello (“this is what a real artist is”), how Fast & Furious 6 changed their outlook on their careers and what they want for the future of streaming.

You produced The Lonely Island song “3-Way (The Golden Rule)”—featuring Justin Timberlake and Lady Gaga—which appeared on Saturday Night Live. What was it like working with SNL?

Alex Schwartz: It was awesome, but to be honest, it was luck, and it wasn’t too much work on our end. We had made a beat a while back, and one of our friends was friends with the guys who did The Lonely Island music. They were looking for tracks, so our friend Dan, who is actually an A&R at Warner Records now, sent a few of our beats to them. It was in the middle of the week. Our manager got a phone call and was like, “SNL wants to use this track the guys did.” They were like, “We can’t tell you what it’s for, because it’s going to be on live television. It’s a matter of if you want to do it or not.” We were like, of course, and we gave them approval. They wouldn’t tell us anything. They just said, “You’re going to have to watch live.”

Joe Khajadourian: Yeah, we watched it live just like everyone else (laughs). At that time, we could never have imagined the beat we made would turn into a parody song for Lonely Island. The beat itself, we thought it would be some sort of pop/R&B or urban-type song that could be on top of it.

That SNL digital short attracted millions of viewers. Did that change your financial situation?

Alex: No. It was way more of a cool look than it was a financial look.

Joe: It was more of a thing between us where we felt we accomplished one goal or something cool. It gave us more motivation to keep going and working harder to further our careers.

Getting on SNL is one thing, but you also produced the Wiz Khalifa and 2 Chainz record “We Own It” for the Fast & Furious 6 soundtrack. What was it like working on music for a movie?

Alex: Working with the music supervisors at Universal, Wiz and 2 Chainz was a dream come true. Joe and I already had some success before but that was the first time it came to life for us. We had worked on the song from the ground up. We were with Wiz cutting the song, going back and forth with the director of the movie and the supervisors. When it was finally done, Joe and I got invited to the premiere. Wiz and 2 Chainz performing it at the premiere for everyone and us hearing the song at the beginning and end of the movie were the first tangible things that we could be part of, outside of hearing our song on the radio.

- Joe Khajadourian of The Futuristics

Y’all have had hits with Flo Rida, Machine Gun Kelly and so many others. Is there a formula for making a hit?

Joe: That’s a tough question to answer. I feel like the music industry and pop music are changing so fast, I feel like that formula changes with it. We’ve always tried to adapt and really think of what the next new formula is. In the past, we’ve done a lot of songs that were rapper featuring singers and those worked really well for us. That doesn’t mean it’s going to work well for us in the future. We have to always make sure of the people and the artists we bring together, and that the song works for the time.

Alex: We never walk into the studio like, “It’s got to be like this or like that.” We very much follow the no rules way of thinking. Our biggest thing is we want to write music with people we enjoy spending time with because it's a very intimate process. We want to do stuff that feels fresh, new and exciting. If you put a formula on that, it could put you in a box, and we’re trying to step outside of the box, at least a little bit, every time we make a new song.

You also worked with Blink-182 on two songs from the band’s Nine album from earlier this year. What was it like working with artists you grew up on?

Alex: It was amazing. It was a dream come true. Being able to be in the studio with Blink-182 was us literally getting to work with our heroes. We feel blessed they liked the songs we did with them enough to put them on their album. The fact that Joe and I have three songs with Blink-182 is something I would’ve never imagined.

Joe: I can’t speak more highly of the guys on Blink-182. They’re amazing and we had a great time working with them.

Alex: We learned more about them and got into their heads. It’s obviously a little more daunting, even if you’ve had success, to get into a studio with a band of that stature and amount of success. Them letting us into their lives and their creative process was the best learning experience ever.

Of all of the artists you've been in the studio with, what is the most impressive thing you’ve seen done in the studio?

Joe: Honestly? Smoke as many drugs as possible (laughs).

Alex: But seriously, when we worked with Camila Cabello, she’s exceptionally talented. You could tell she lives and dies for her art, and she’s extremely intuitive. She’s an incredible singer and a very good writer. Being in the presence of someone like that you’re like, “This is what a real artist is.”

As far as the music industry is concerned, the most influential change to the industry this decade was the popularity of streaming. As producers, how did it affect you two this decade and what do you hope to see changed in the next decade?

Alex: It’s tough to talk about streaming without talking about the financials of it. I think the best part about the streaming has been the accessibility to hear our music. We went from being purely based on albums sales and people downloading music on iTunes. Now, we have Apple Music and Spotify, and there are actual numbers there. When we have a big song, it’s pretty impressive to see we reached over a billion people with these songs. At the same time, the way people bought music in the ’90s and early 2000s, I think the financial climate for record producers and songwriters would be very different if that was the same with streaming. I think the best thing is the songwriters and producers are coming together to fight for what we believe we deserve, and it’s a matter of getting there.

Joe: We hope in the future, the streaming shares would be paid out a little more fairly. We’re hoping for those types of changes. I think streaming is incredible but it's going to take time though.