Tyler, the Creator's Grammy Performance Was Out of This World, but It Wasn't His Only Standout Moment 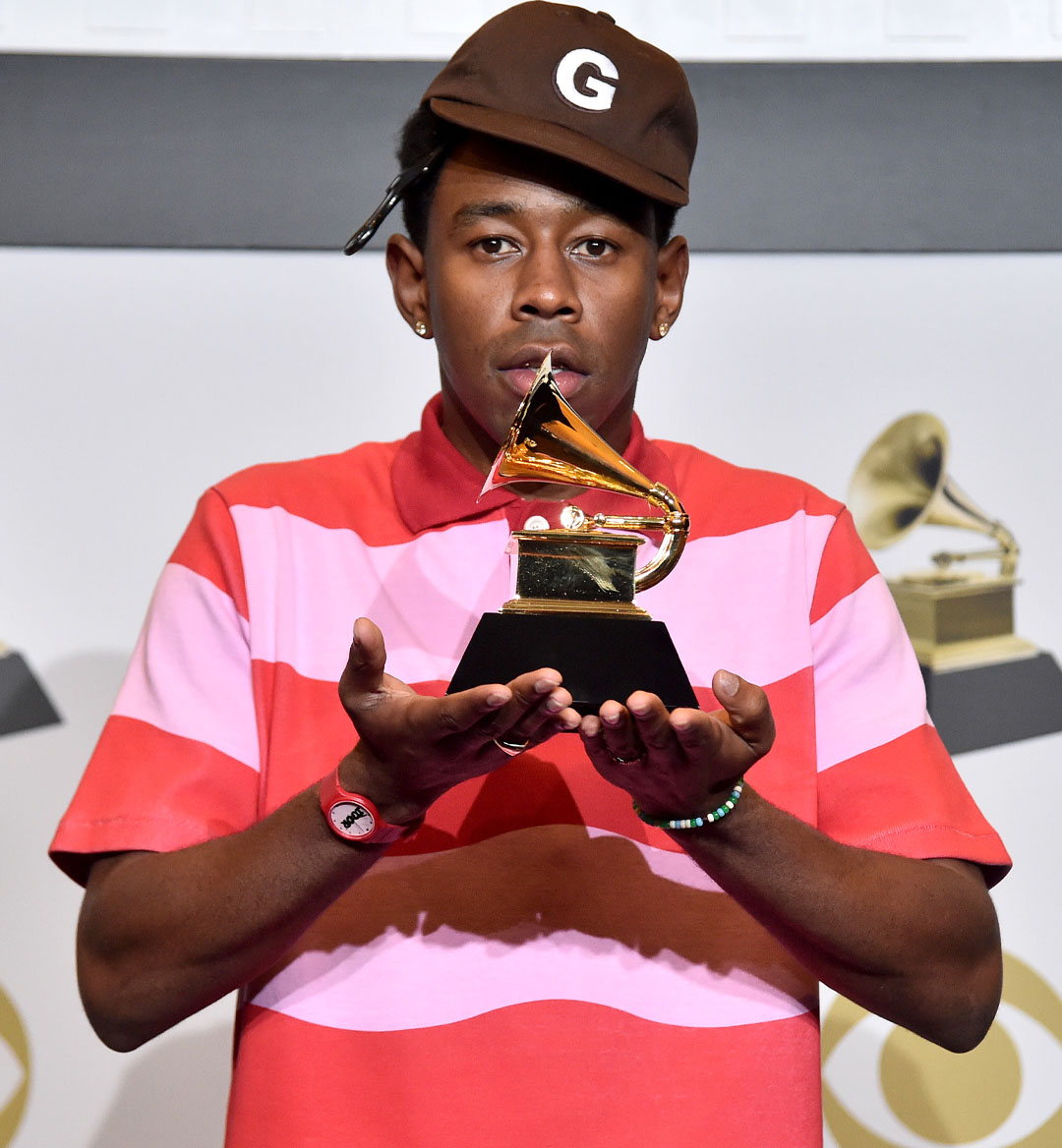 Music's biggest night, the Grammy Awards, was held Jan. 26 at the Staples Center in Los Angeles. The awards show held a somber tone due after the death of NBA legend Kobe Bryant, his daughter Gianna and seven others in a helicopter crash in Calabasas, California, that morning. Bryant was remembered in performances throughout the night, with Alicia Keys, Boyz II Men, Lizzo, Lil Nas X and more all dedicating their acts to his memory.

Hip-hop superstar Tyler, the Creator made his presence felt throughout the night, delivering a jaw-dropping performance and accepting the Grammy for Best Rap Album for his 2019 project, Igor. He also shed some light on underlying social issues in the Recording Academy that can no longer be ignored.

During his acceptance speech, Tyler's mother accompanied him on stage. He thanked her first, saying: "To my mother, you did a great job raising this guy," before embracing her. It was a heartwarming moment where his mom couldn't help but let the tears flow.

Along with Billie Eilish, who won four of the most significant awards (Album of the Year, Best New Artist, Song of the Year and Record of the Year), Tyler dominated the night. Here are three reasons why.

His Performance Was on Fire (Literally)

Tyler, the Creator out here causing literal earthquakes during his performance at the #GRAMMYs pic.twitter.com/I53FaGsqS5

Not one to deliver a subdued performance, Tyler took to the stage in his signature blond wig, pink suit and a few dozen of what can only be called Tyler clones. They sang his hit single "EARFQUAKE," along with "NEW MAGIC WAND," both from his award-winning album, Igor.

His singing and rapping were angry and somber all at once, and then to finish things off, he cranked things up to an 11. The stage was engulfed in flames, and he left the scene by falling into the fire. An iconic performance without a doubt.

TYLER THE CREATOR’S PERFORMANCE ON THE GRAMMY’S TONIGHT WAS SUPERIOR pic.twitter.com/3yBuVb2xKK 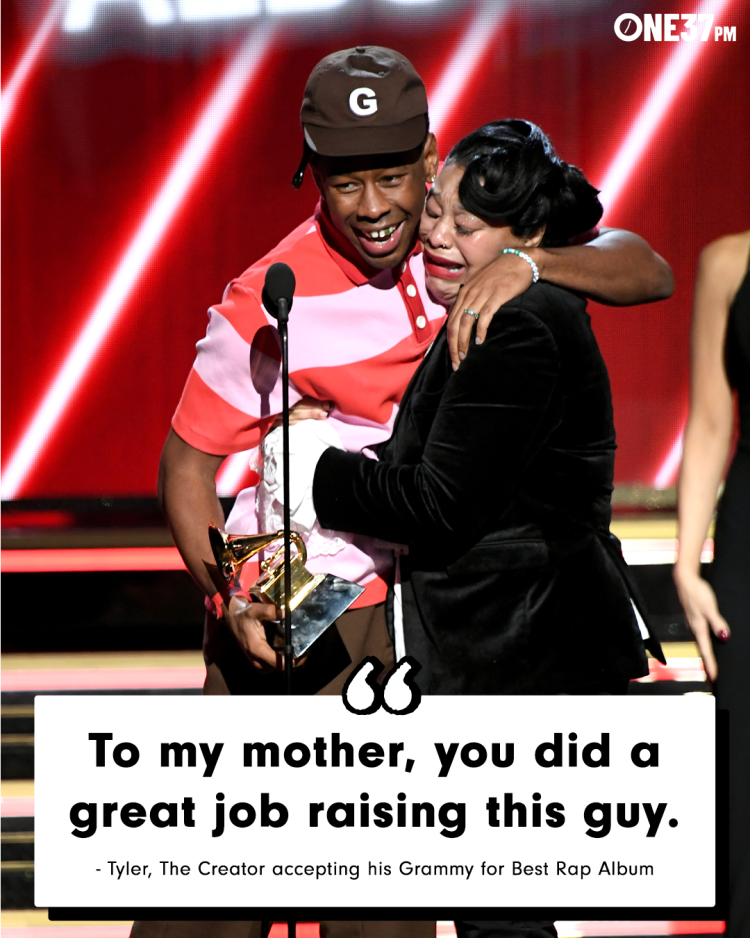 Tyler, the Creator brought home the 2020 Grammy Award for Best Rap Album for his incredible work, Igor. It was more than well deserved, as it was one of the most well-received projects of 2019, loved by both critics and fans alike.

During his acceptance speech, Tyler made sure to thank his team and the people that had helped him get to that point in his career. First on his list? His mother. He also shouted out his manager, Christian Clancy, as well as his friends and family for placing their faith in him and not restricting the vision he has for his career and life.

Finally, he shouted out Pharrell Williams, saying: "I really wanna thank Pharrell Williams. For growing up and feeling left of center to a lot of stuff I saw on TV, that man opened doors." He wrapped things up by thanking his enormous fan base, acknowledging that they welcomed him, despite his unique spin on the hip-hop genre that could have quickly been rejected by a mainstream audience.

Tyler Calls Out the Grammys and Remembers Kobe Bryant

fter leaving the stage, Tyler gave an interview in the backstage TV/radio room, sharing his thoughts on not just winning the Best Rap Album Grammy but also on the underlying social issues that plague the Grammys and awards shows at large.

"It sucks that whenever we—and I mean guys that look like me—do anything that's genre-bending, or that's anything they always put it in a rap or urban category,” he said. “I don't like that 'urban' word—it's just a politically correct way to say the n-word to me."

"When I hear that, I'm like why can't we be in pop?” he continued. “Half of me feels like the rap nomination was just a backhanded compliment. Like, my little cousin wants to play the game. Let's give him the unplugged controller so he can shut up and feel good about it—that's what it felt like a bit."

In addition to sharing his thoughts on these critical issues, he also took the time to remember the Kobe Bryant and the late rapper Nipsey Hussle and the impact their deaths have had on not just native Los Angelenos but the world at large.

"Man, that news was heavy, especially just being in LA and just being at the Staples Center and within a short period between him and Nipsey [Hussle]...And if you're from Los Angeles and depending on what sector you're in, like, that shit is really, really heavy."

So we took an L tonight and rest in peace to Kobe, that hurt. But also we took a win just being from Los Angeles, and taking that home, so it's mixed emotions.

Bryant's death weighed heavily on the 2020 Grammy Awards, and the artists helped the audience grieve in their own ways. The Grammys provided a temporary distraction from the terrible news while simultaneously paying their respects to the NBA legend.

Tyler, the Creator may have stolen the show at the Grammys, but it was still, most definitely, Kobe's night.