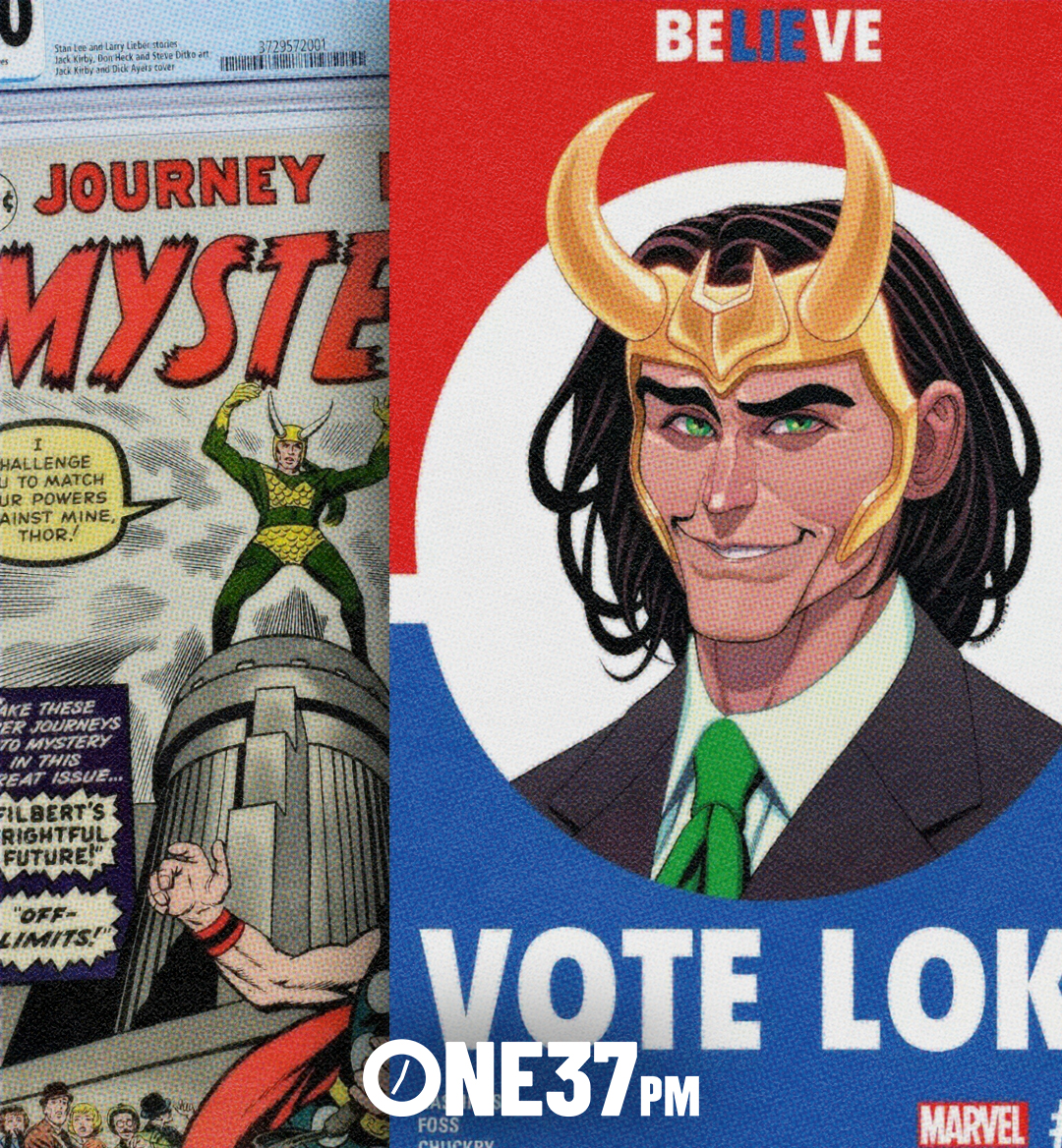 This week in the comic market, the attention has shifted from some of Earth's Mightiest Heroes to one of its biggest villains with the debut of Loki on Disney+. Just one episode in and it seems as though we have yet another smash Marvel show on the streaming service. The God of Mischief Loki has long been a fan favorite, and his own series was one met with major anticipation. If social media is any indication of the success of Episode 1 of Loki, I would say Feige and team should be feeling very good about the debut of the new series as it aims to maintain the effect that WandaVision and Falcon and Winter Soldier had on fans and the comic market alike.

#Loki and #Mobius are suited up for the TVA with their new emoji hashtags 🕰 pic.twitter.com/cdP2f493Wj

I am a big fan of the Wednesday release day Disney switched to for this series release. I think that will only add to the experience as Wednesday is a sacred day to comic book collectors; it is known as New Comic Book Day for the fact that new comics are released every Wednesday. I also believe this will have an effect on the comic market as we have seen a slow build on the market since the show's debut Tuesday Night / Wednesday Morning .

Feeling mischievous? If you're loving Loki and want to Collect some of the key issues surrounding the show in your collection, I have you covered. This week we will look at five comics heating up due to Loki on Disney+. 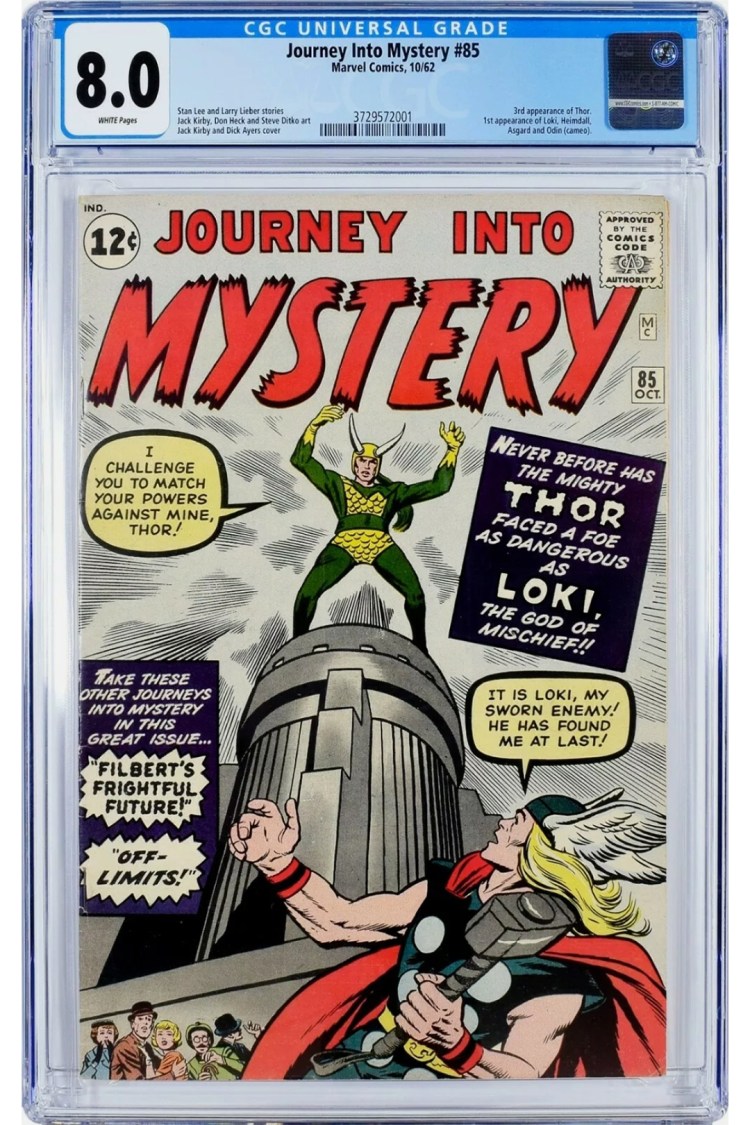 Any discussion of Loki comics or Key Issues has to begin with the grail of all Loki collectors (and some Thor fans as well), Journey Into Mystery #85. This is of course Loki's first comic book appearance. Featured prominently on the cover, this book is a Silver Age classic. This book has long been sought after and held in high regard but has certainly seen an uptick in interest since Tom Hiddleson's turn as the character on the big screen.

While this book is the crowning achievement of any Loki collection, it is an expensive book to pick up on the market with asking prices for even slabbed books in the 1.5 range running over $2500. The most recent eBay sale is $8500 for a 3.5, but this is the type of book you see sold at major auction houses rather than sold on eBay by an individual. High grade copies can run in the mid 5 figures, making this book out of reach for a lot of MCU fans. 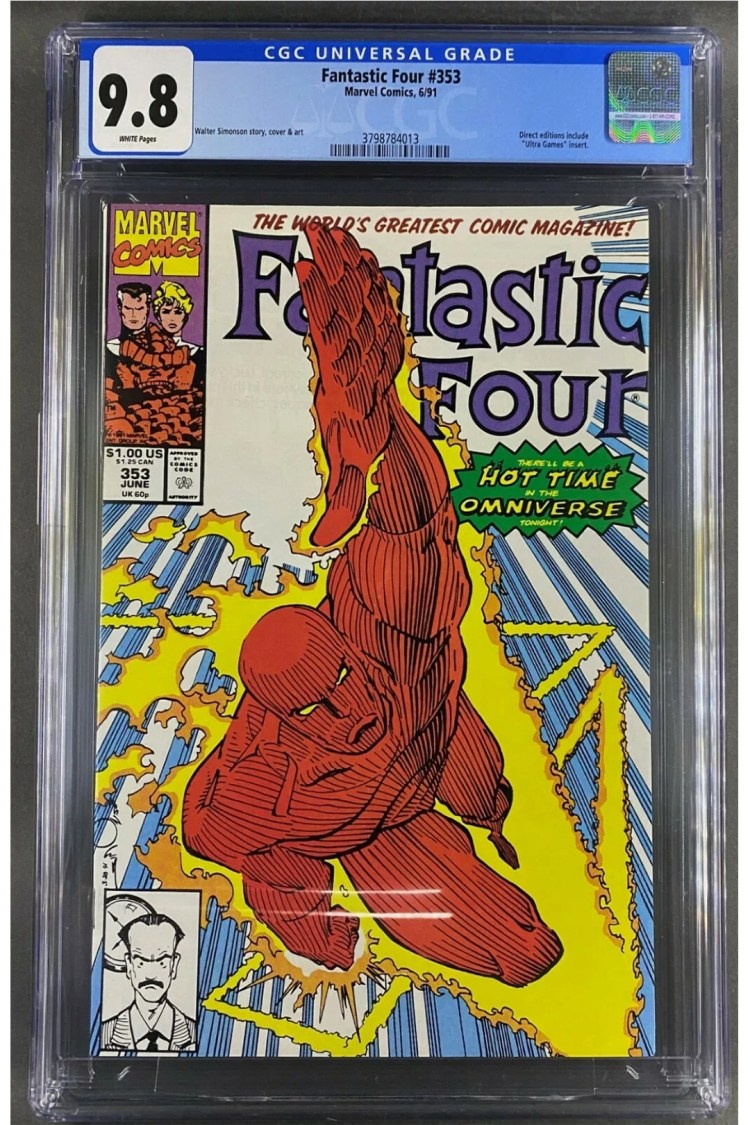 Owen Wilson is no stranger to playing iconic characters that resonate with a viewing audience and he seems to have done it again with his role as Mobius M. Mobius. Mobius was a character little known to even the biggest of Marvel Comics readers, yet has been a standout character on social media, trending on Twitter even days after the show's premiere.

Mobius first appeared in Fantastic Four #353 and is even featured on the bottom left corner box on the cover of the direct edition of the issue. This is really interesting because, historically, buyers preferred the newsstand version of an issue featuring a bar code in the left corner box, as it is believed to be the harder version to find in high grade. What's unique in this instance is that, with the only depiction of Mobius on a cover coming from the direct edition, we may have an exception to that school of thought. Fantastic Four #353 is seeing series demand with raw copies selling for over $20 and prices of slab copies are escalating quickly with sellers commanding $900-$1000 for 9.8 copies. This is one of the things I love about comic investing; Mobius' first appearance has been in $1 boxes for the last decade or longer. It will be interesting to see how long Wilson sticks around in the MCU and if this issue will have staying power once he departs. 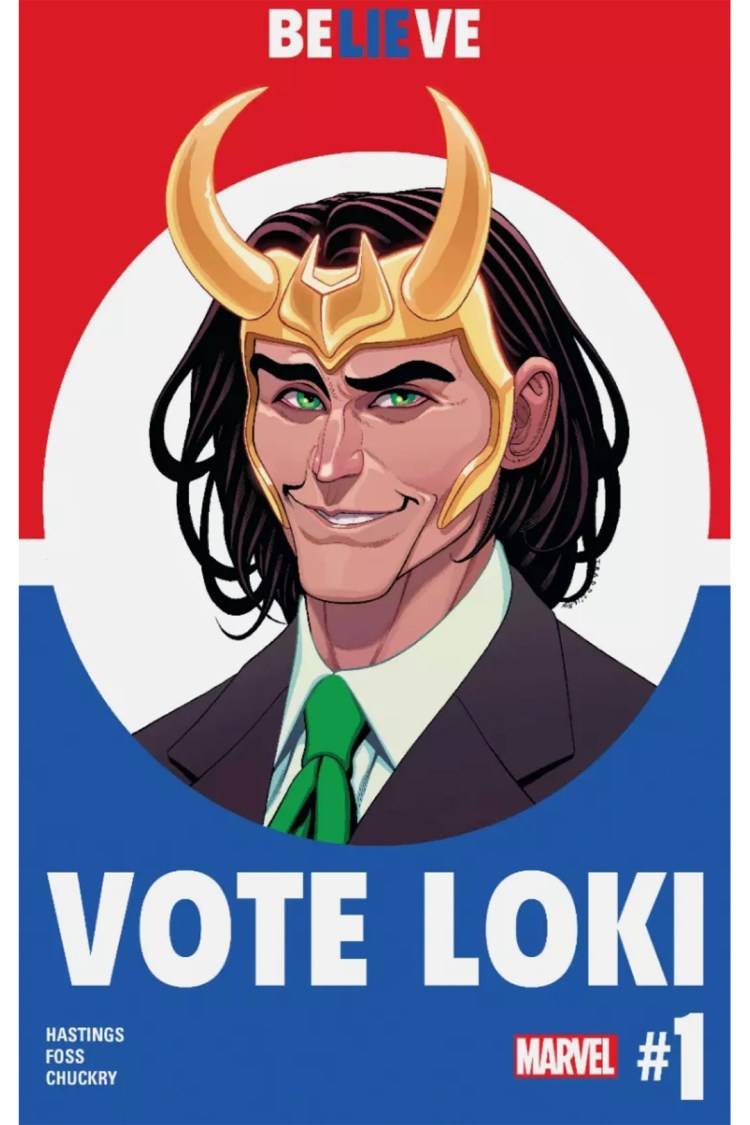 A very brief shot of a scene depicting Loki in an outfit and crown nearly identical to that on the cover of this issue and series leads most collectors to believe there will be some tie in to the show in some way. The degree to which it will be involved is up for speculation, but the comic community loves to speculate and prices on the secondary market reflect that. Vote Loki #1 is trading for $50-75 raw and over $225 in a 9.8. I would expect these prices to trend upward as we get closer to that scene we saw from the trailer. What happens after that is anyone's guess. 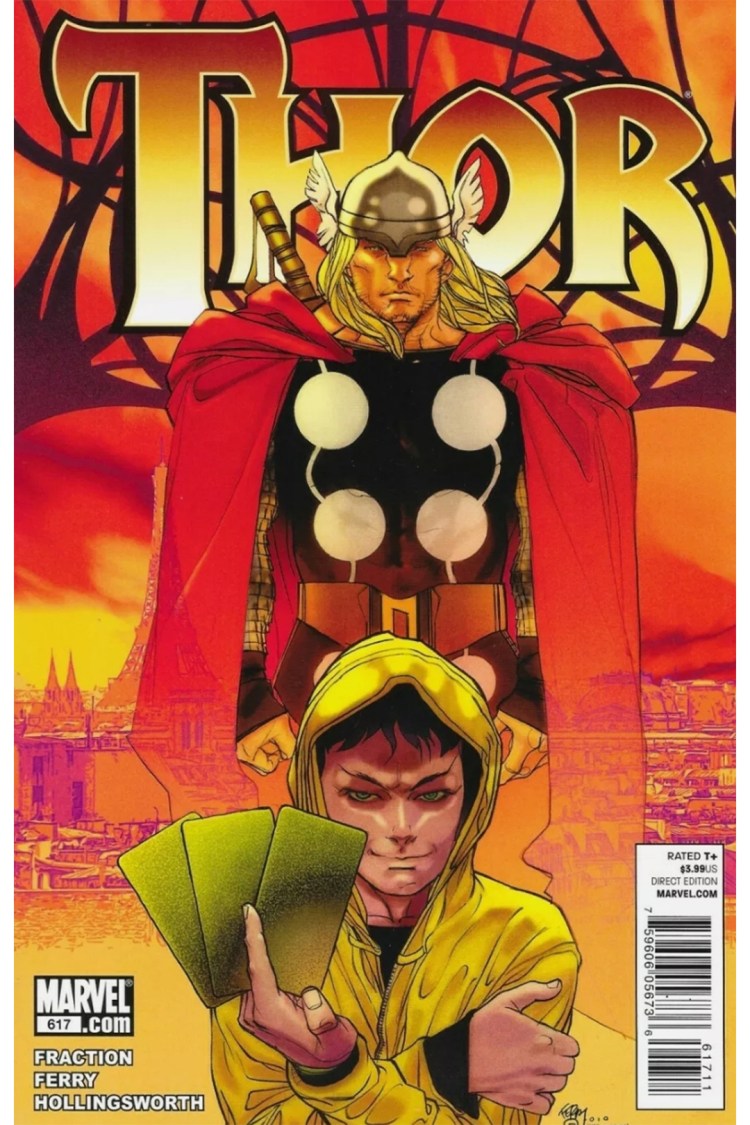 As I previously mentioned, comic buyers love to speculate. Rumors surrounding this series have led to spikes in certain books months before we were even looking at a premier date. Two such issue are Thor #617 (Vol1) an Thor #5 (Vol 2).

Loki is a gender fluid shapeshifter who can be more than what we have seen so far in the MCU. Reports coming from the filming of the series state that there will be a kid and a female version of Loki in the season. This jives with the history of Loki in the comics as he has been depicted both ways in the past during Thor comic book runs.

In Thor #617 we get the first appearance of a Kid Loki. This book was in dollar boxes for years and it's 1:15 Tron incentive variant didn't fare a whole lot better. But since these reports have surfaced, buyers have been speculating heavily on this version of the character, pushing raw sales of the book to around $75-100 raw for Cover A.

Thor #5 from the following volume depicts Loki as a woman and is seeing some equal attention (and debate) among speculators who are actively buying copies of Cover A and the J Scott Campbell variant. Buyers should expect to pay $40-60 raw for a copy of either Cover A or the Campbell Variant. 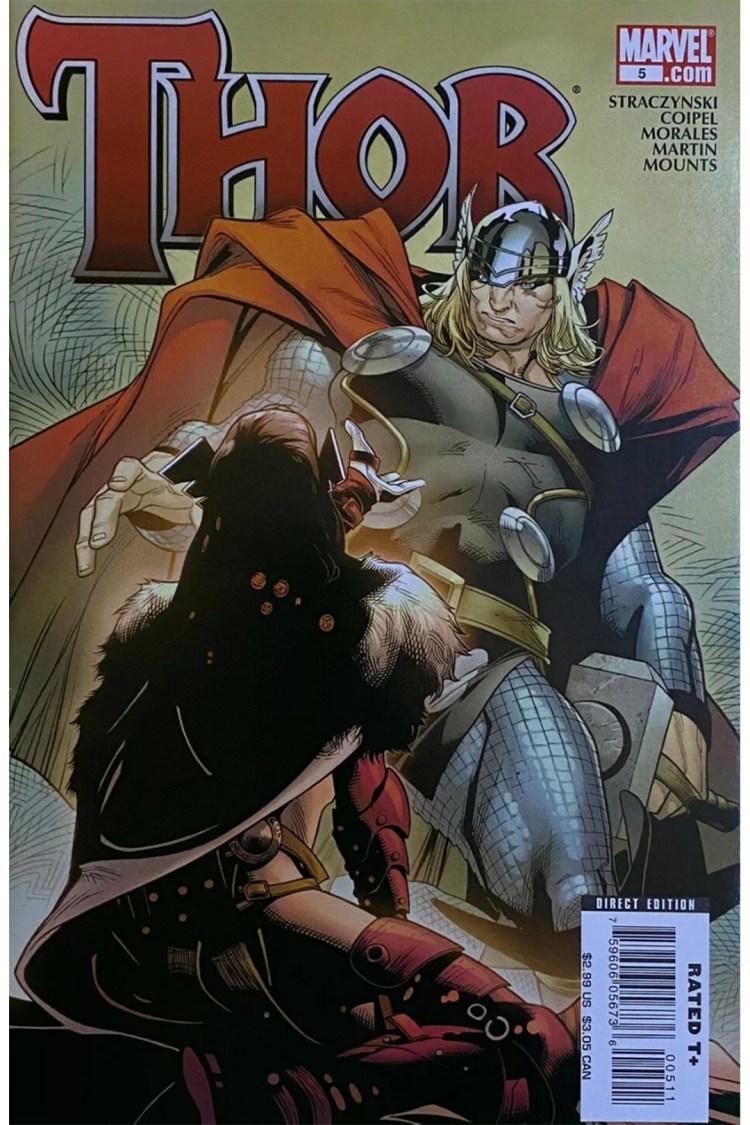 Whether chasing grails, buying a new fan favorite, screenshotting trailers or speculating on rumors, comic buyers are active in the Loki market as we speak. With the popularity of Episode 1 and the track record of these MCU shows on Disney+, I only expect that to continue. These were just five books seeing attention from various segments of the collecting community and I have no doubt in the coming weeks we will see more books spike as events unfold in the show. No matter what type of buyer you are, there is something for everyone and we will certainly keep you updated weekly on any new spikes in the comic market, right here at ONE37pm.