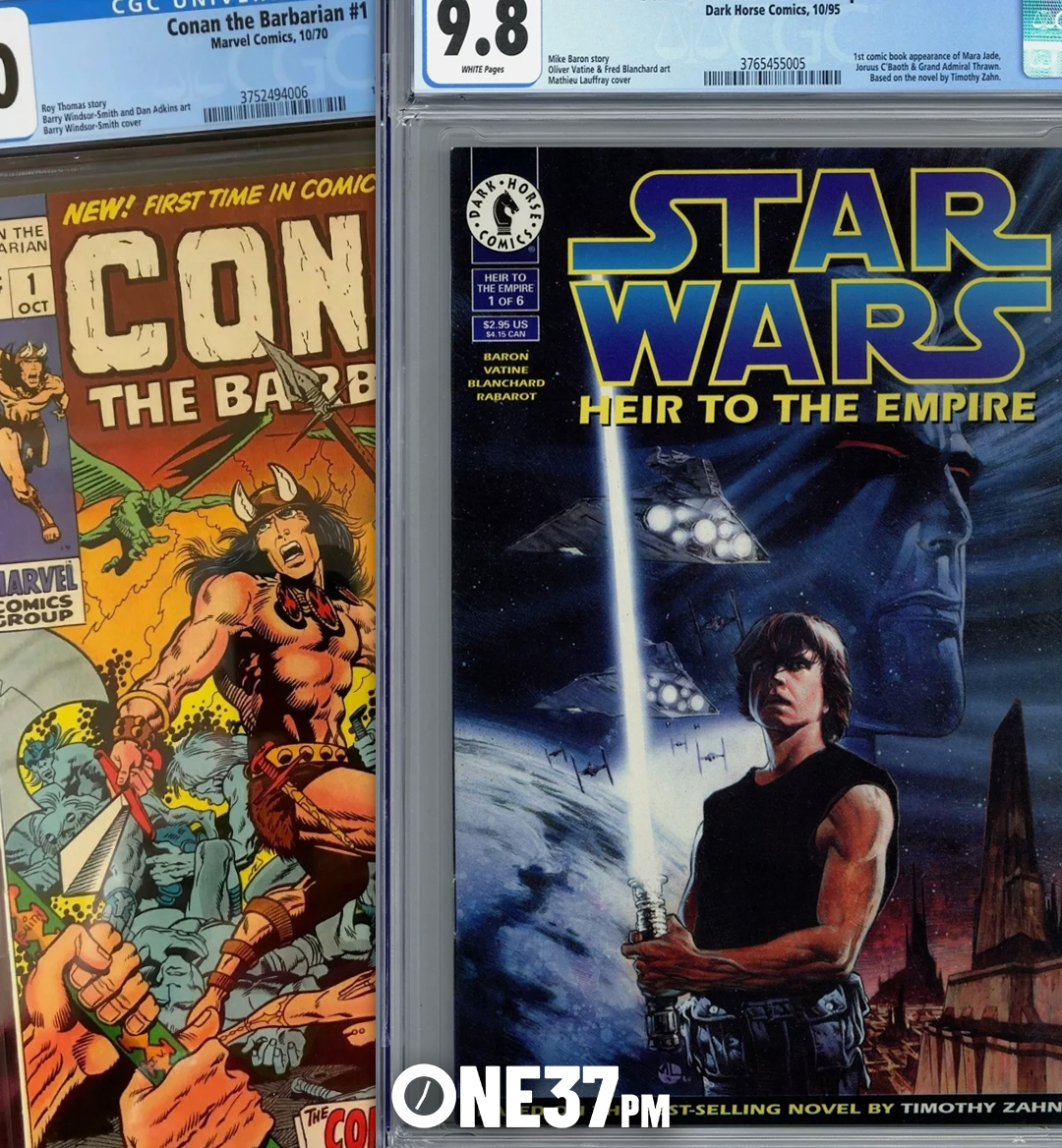 Last week I hit you with an investment play that I am a big fan of: Licensed comic book IP. The biggest publisher in comics, Marvel, has been scooping up licenses that Disney owns the film rights to since 2015.

As I went into last week, Marvel has a history with licensed IP dating back to the late 70s. They moved away from that model into the 90s, only to jump back in with both feet in recent years. There is some real corporate synergy in their acquisition of IP as they have targeted properties Disney owns the film rights to, giving them further control over the IP. This week we will look at Marvel's Licensed IP.

There is no better place to start than the flagship of Marvel's Licensed IP with the Star Wars franchise. Marvel was the original publisher of the franchise back in 1977 before letting go of the license, seeing indie publisher Dark Horse pick it up and run with it into the 90s and 2000s.

Star Wars made their triumphant return to Marvel in 2015 and has seen their comic stock rise ever since. The recent Mandalorian Disney + series only served to pour lighter fluid on the property as it really opened the doors for a new generation of Star Wars characters and a multitude of shows and films. 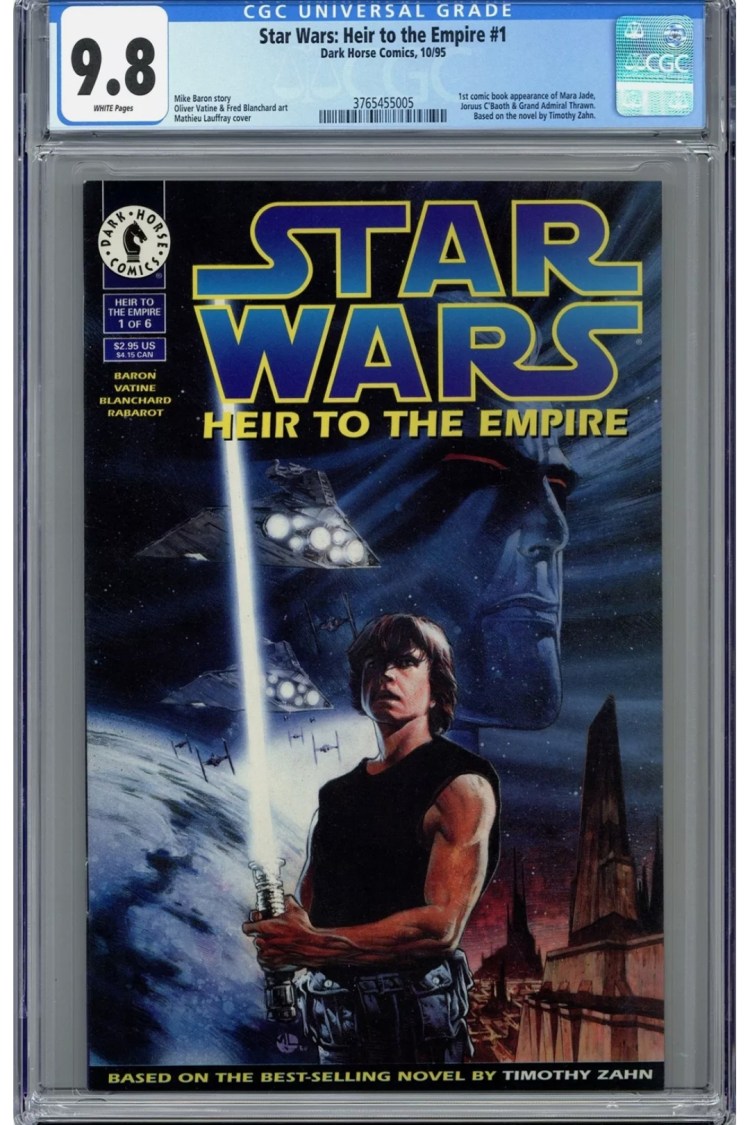 Star Wars: Heir to the Empire #1

Yes, Star Wars #1 from 1977 is an amazing book and investment in any grade. It is the 1st appearance of Star Wars in comics and is a true blue chip piece in the hobby. I also love issue #2 (1st Han Solo), #41 (1st Yoda), #42 (1st Boba Fett) , and #43 (1st Lando) from that original Marvel run. But with the majority (minus Fett) of the characters' stories having been told ad nauseam, I actually think some of the Galaxy's newest stars are the ones who will show the most gains. 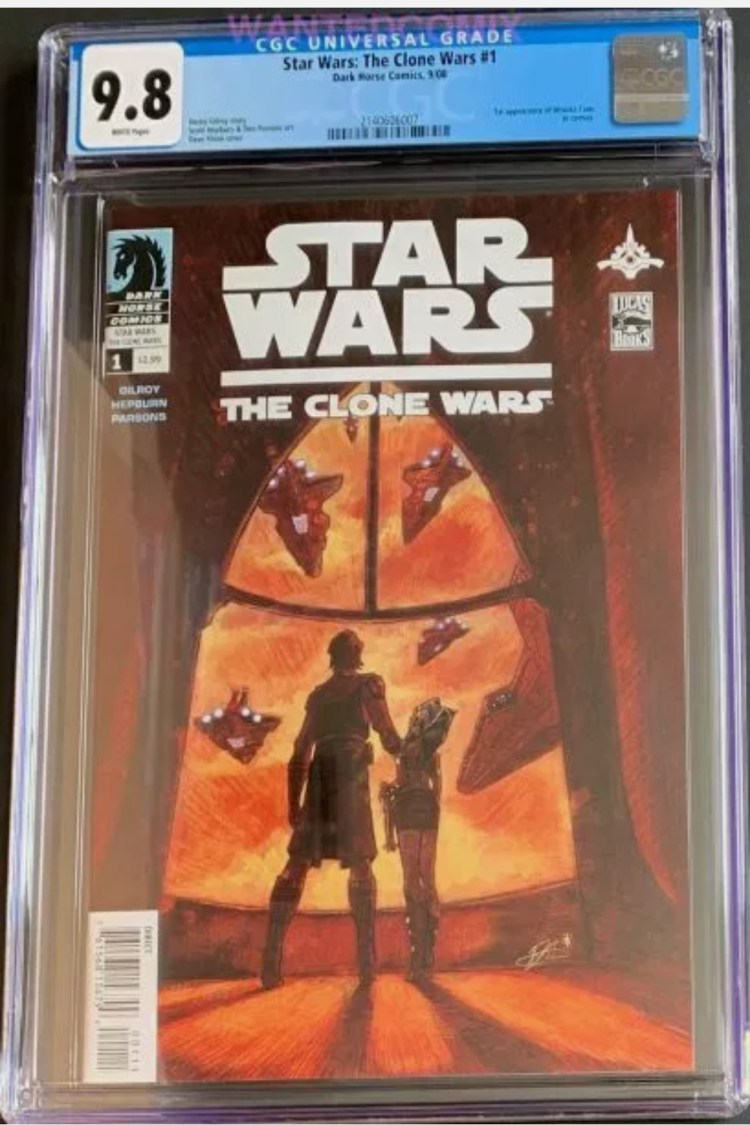 First we begin with Rosario Dawson's Ahsoka Tano. Ahsoka is a wildly popular character from the animated series as well as the Dark Horse Comics run. She 1st Appears in 2008's Star Wars The Clone Wars #1. Her CGC 9.8 1st appearance recently sold for over $3,700 with 9.6's hitting just over $1,200. The lowest current ask on a 9.8 is $5,000. There is also a variant Cover for this issue. It has become a bit of a ghost of late with just one available on eBay at the moment, a 9.4 with a $4,500 asking price. I suspect prices will only rise as we get closer to 2022's Ahsoka series on Disney +.

The Alien and Predator franchises are headed to @Marvel, and we have an exclusive first look at some killer artwork from @DFinchArtist. https://t.co/wKiK0TcmfH pic.twitter.com/AGCfT1jSdq

In 2020, Marvel announced a major acquisition with the purchase of the comic book license for Fox's Alien and Predator. Disney acquired the film rights to these properties as part of the Fox buyout and this seems like a logical product integration play. Much like Star Wars, Alien and Predator had both been published by Dark Horse Comics for a number of years until 2020.

These two properties are forever linked and really have a lot of film and television series potential for Disney's Fox imprint. Dark Horse Presents #24 is a sneaky 9.8 play at just $350 and features the 1st appearance of Alien in comics. Alien has really stood the test of time over the last several years even trending within the last few weeks on Twitter as people debated "Is Alien a horror film?" . I have really high hopes for what Disney can do with this franchise. Marvel just started rolling out the new comic series, so that should help initiate a whole new audience to the IP. 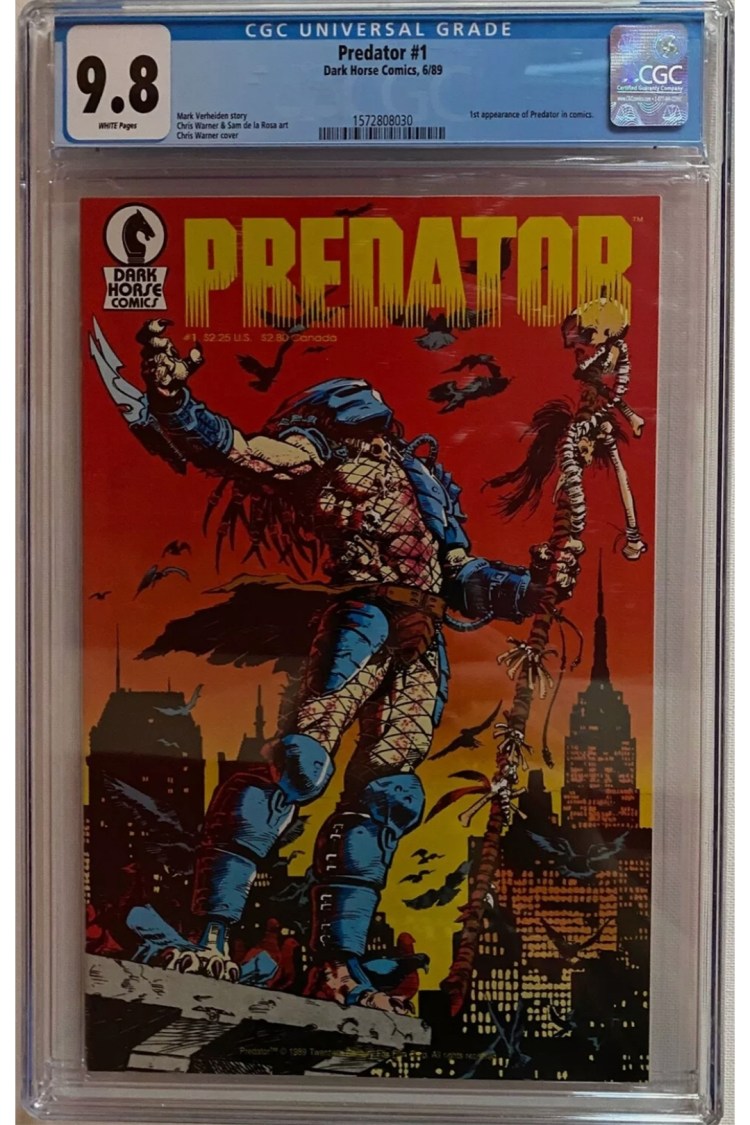 You can't mention Alien without talking about Predator. CGC 9.8 Predator #1s will run about $1,000, largely due to a small pop report of just 231 at the time of the writing of this column. I am more a fan of the Alien play, but honestly these two properties are so synonymous; when the popularity of one increases, the other is sure to follow. If you're a believer in that principle then you can double down your play with a 9.8 of Dark Horse Presents #36, which features the 1st Alien Vs. Predator.  That will run you just over $200 and is a solid play as we know the franchise has gone there before, and I imagine Disney will want to do some sort of crossover between the franchises at some point in time.

There are also some Marvel Comics fans speculating whether or not we could see these properties show up in the Marvel Universe. While that may seem far fetched to some, believe it or not, there is precedent. Just look at Conan. 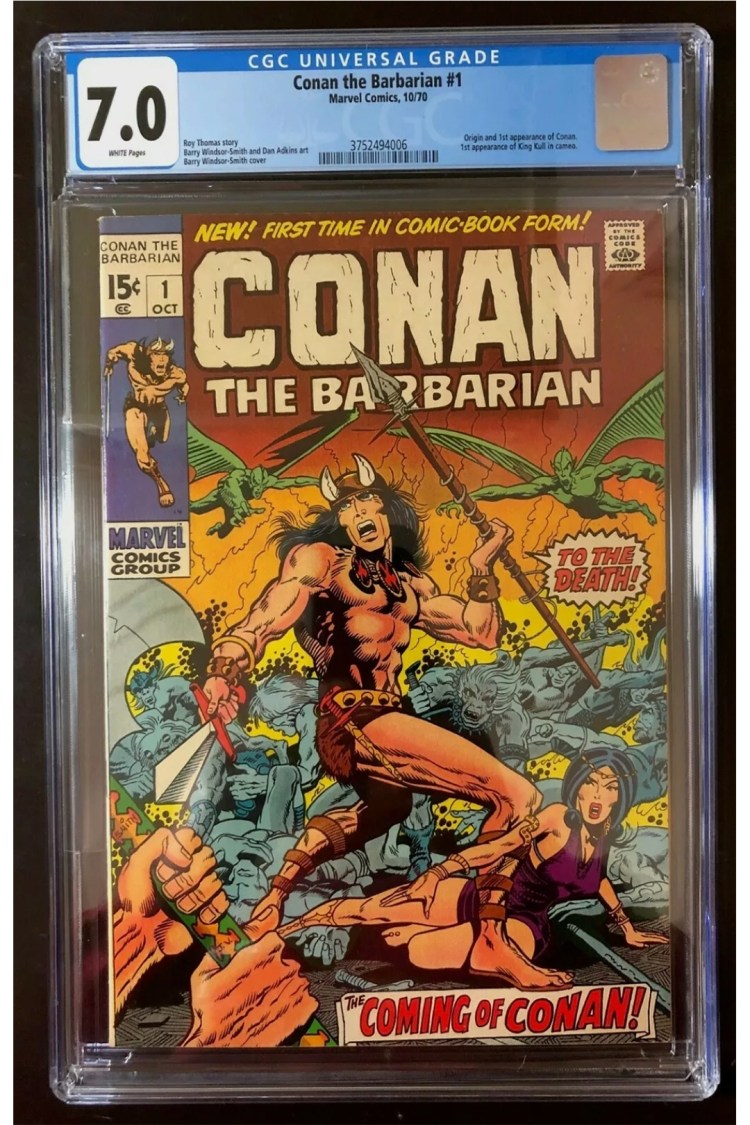 Conan is another comic book property that originated with Marvel that recently found its way home. Conan debuted in Marvel's 1970 Conan The Barbarian #1, which trades for around $2,500 in a 9.6 grade within the last month. While Disney does not own the film rights to Conan, their return to publishing the character a few years ago has re-sparked interest in the Barbarian. Fans are clamoring for one more Arnold Schwarzenegger Conan film, this time adapting the comic story King Conan featuring an Old Man version of Conan, similar to Hugh Jackman's character in Logan. In comparison, a King Conan #1 9.6 is available for just $70 at the moment. I definitely see some potential there.

The most shocking development has been Avengers comic book writer Jason Aaron's No Surrender storyline, which brought Conan into the Marvel Universe. This was a shocking turn and one comic collectors ate up. This event caused a spin-off series with a Conan led Avengers team called Savage Avengers that took off as well. This truly only leaves me with more questions: Could we one day see Disney strike a deal to bring Conan to the MCU?  Could we see the same comic crossover from Alien and Predator?

With all those questions left unanswered, as well as all the information we do have, Marvel licensed properties provide solid buying opportunities for the newer comic investor.

This week's big release was Joker #2 from James Tynion and DC Comics. One of my previous features for this site was on the invest-ability of Tynion and his current role in the marketplace. Well, he did it again with the creation of comics' hottest new character as Tuesday was the release of Vengeance, the daughter of Bane. Pedigree characters like this are usually popular, having a natural tie in to an existing fan base. Cover A, B and C are selling for $15 plus shipping each and were sold on Thursday for $5.99 at comic shops. There was a surprise one-per-store variant cover featuring Vengeance by Santa Prisca. That book is selling for over $250 raw and climbing. I cannot wait to see what graded copies of these books sell for. Be sure to stop by your local comic shop as they just may have Joker #2 in stock.

Join me right here next week when we look at some monumental key books hitting the auction block, as well as talk about comics' hottest indie property with the most jarring title: Something is Killing The Children.