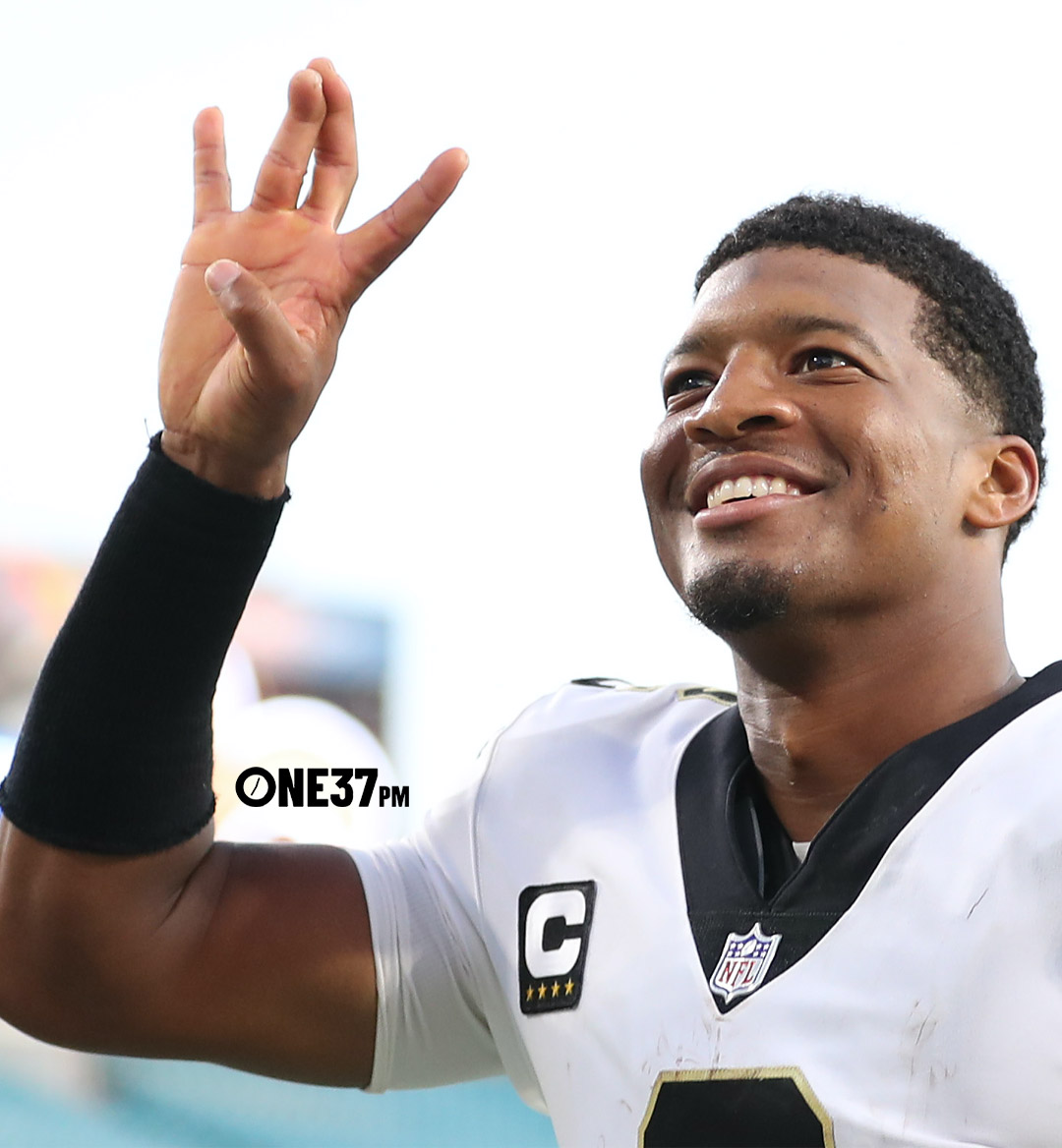 The NFL is back and stadiums across the league are packed with fans cheering on their teams for the first time in two years. There's nothing quite like opening day when every team is tied for first place and optimistic fans can dream of a Super Bowl run...even if only for one week.

When the dust settled, some intriguing names stood out on the stat lines as previously under-the-radar players that I think might be worth taking a flyer on in the football card market. Below is my list of the top three quarterbacks, wide receivers, and running backs, as well as one tight end that is currently the most undervalued at their positions. 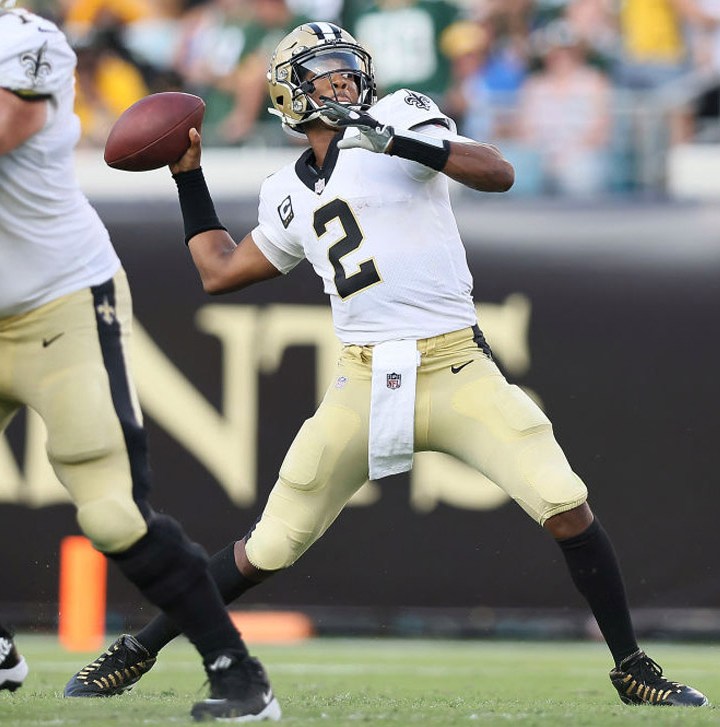 “Famous Jameis” is among the more polarizing players in the entire league, known as much for “crab legs” and becoming a meme with his “eat a W” pregame speech as he is for throwing for over 5,000 yards in his final season in Tampa. The former first overall draft pick finds himself in a great spot running Sean Payton’s offense in the Big Easy, and he could be poised to go on a deep playoff run. The Saints defense looks elite and their offense has superstars Alvin Kamara in his prime and Michael Thomas set to come off of IR in week seven.

On July 28th, his 2015 Prizm Silver PSA 10 rookie was selling for just $275. One sold right after the opener for $800. It'll be fun to watch how Jameis' market plays out if he continues to put up these types of numbers and the Saints continue to win. 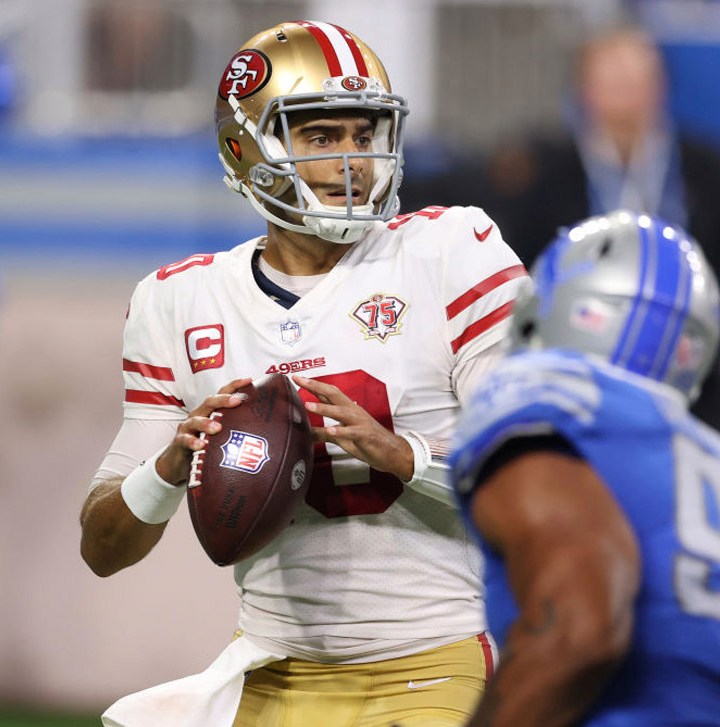 “Jimmy G” is in a very difficult situation in San Francisco. He's the 49ers starter (for now) but has 2021 first-round pick, Trey Lance, on the bench waiting for his opportunity. However, the Niners are healthy and appear to be a real contender in the NFC, with legit weapons throughout the roster (more on some of them below) and offensive mastermind Kyle Shanahan as head coach.

Whether or not Garoppolo is able to hold on to the job all season remains to be seen, but if he continues to put up similar performances like he did against the Lions, how could they possibly bench him?

His rookie cards are wildly inexpensive, with his 2014 Prizm PSA 10 base rookies selling for about $35 and the silver PSA 10s going for about $150. To be able to get the starting quarterback of a contending team’s rookie cards at these prices is certainly intriguing. The upside will be limited—as his future clearly isn’t in San Francisco—but there's very little downside. If you believe that the Niners are poised for a deep run, it might be a good play to scoop up a few of his cards. 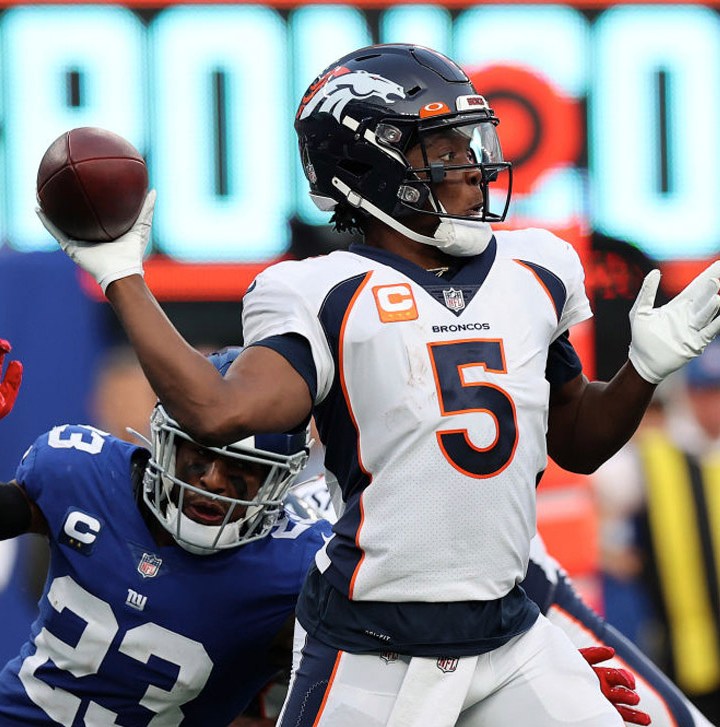 Teddy is one of the easiest guys to root for in the entire NFL, after going through one of the most gruesome injuries imaginable and bouncing around from team to team. The former Vikings, Jets, Saints and Panthers quarterback is now the Broncos starter and kicked off his career in Denver in style, beating the Giants on the road and putting up an impressive stat line in the process.

How good Denver will be remains to be seen and the odds of them even making the playoffs seem slim. But if Teddy can string together a few more performances like he did in the opener, you could see a nice little bump in the price of his cards. With a week two matchup in Jacksonville and then their home opener in week three against the Jets, it’s not a stretch to say that the Broncos could be looking at a 3-0 start, and Teddy could be one of the best stories in the league at that point.

I’m a buyer at these prices. 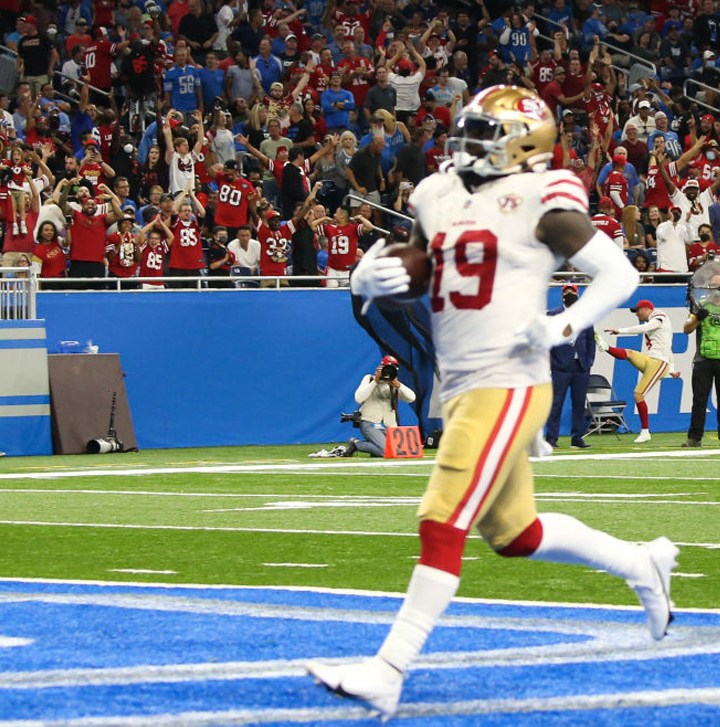 After being out most of the 2020 season due to an injured foot, Deebo had a monster week one, finishing second in the entire NFL in receiving yards and catching a 79-yard touchdown pass in the process.

The 2019 second-round draft pick appears poised to have a huge season, but the only question is whether or not he can stay healthy. His 2019 Prizm PSA 10 base rookie sold shortly after the game for $61 and a PSA 10 silver can be had for around $150. 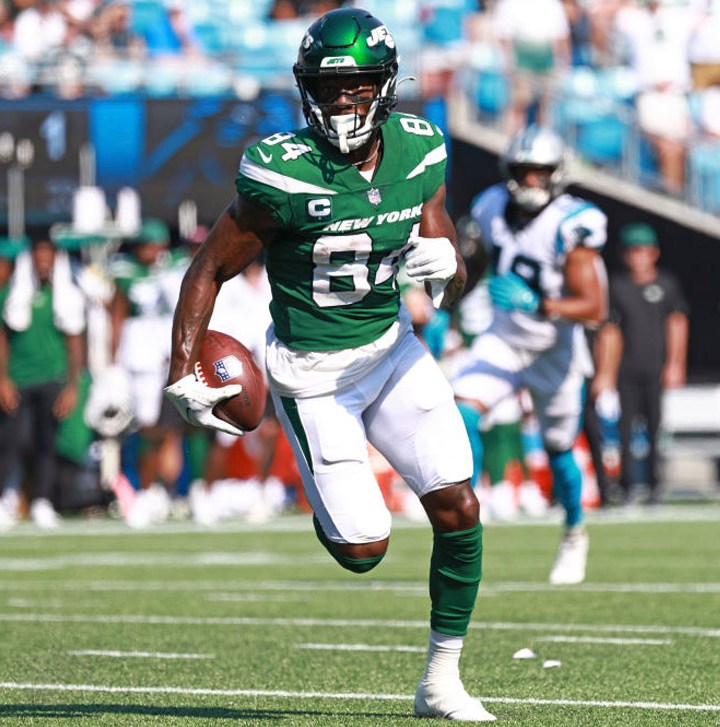 What a start to Davis’ Jets career. The former Titans' first-round draft pick signed to New York this offseason for three years, $37.5 million, and the early returns were very positive. The Jets lost to the Panthers, but top draft pick QB Zach Wilson and Corey Davis got off to a flying start, connecting in the end zone twice.

Davis was named the 91st best player in the 2021 “Top 100 Players” rankings by the NFL Network, so he isn’t completely under the radar. However, he appears poised to become an absolute star in New York as a true No. 1 receiver.

The prices of his cards are still very inexpensive, with even his National Treasures true RPAs /99 selling for just $50. If you want to get some Corey Davis cards, the time is now before he puts up a few more of these performances. 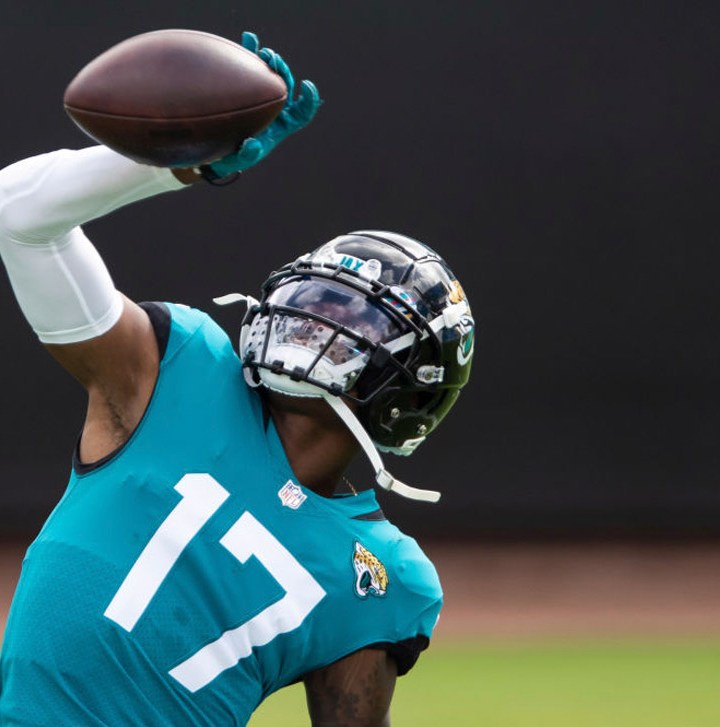 The Jaguars' top receiver is in a contract year and looking to recreate (or even surpass) his 2019 season, during which he was named a Pro Bowler. He didn’t play in any of the preseason games—so this was his first game catching passes from star rookie quarterback Trevor Lawrence—and the early returns were good.

One of his National Treasures true RPAs /99 sold the other day for $152, and there seems to be some upside if he and Trevor continue to connect in the end zone on a weekly basis. 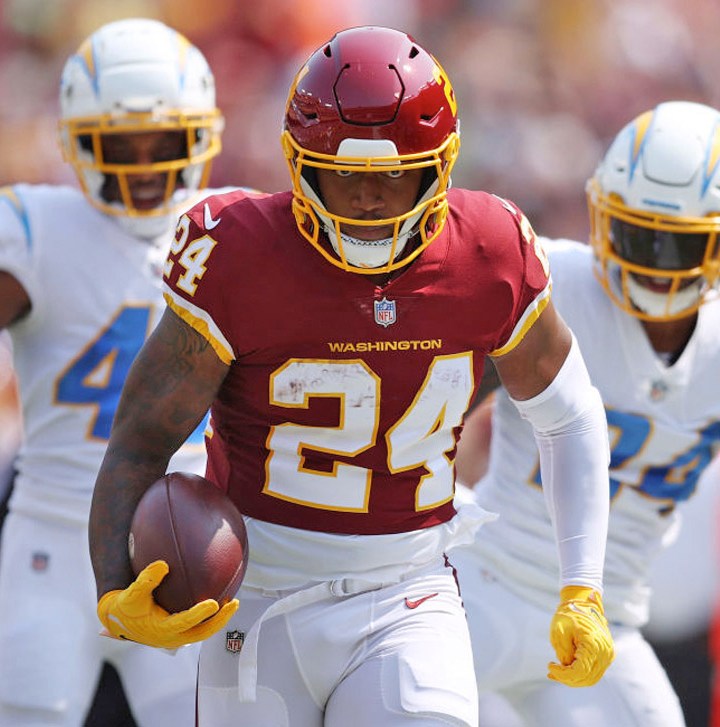 Antonio Gibson has been on my radar all off-season—and he didn't disappoint in week one. While Washington took a loss in their first game, there's a lot of reason for optimism. Quarterback Ryan Fitzpatrick went down with an early hip injury, giving way to backup Taylor Heinicke, who's played well every chance he's been given.

While Gibson shined as a rookie last year, running for 795 yards and 11 touchdowns in just 14 games, the potential is there for him to become a star for the Washington offense.

His card prices are relatively high compared to some of the other people on this list, but that’s because he's already had a breakout season of sorts, and is much less “under the radar.” You can still snag a National Treasures true RPA /99 for around $300 - $400 depending on how nice the patch is. I think there's still a lot of upside in the Gibson market. 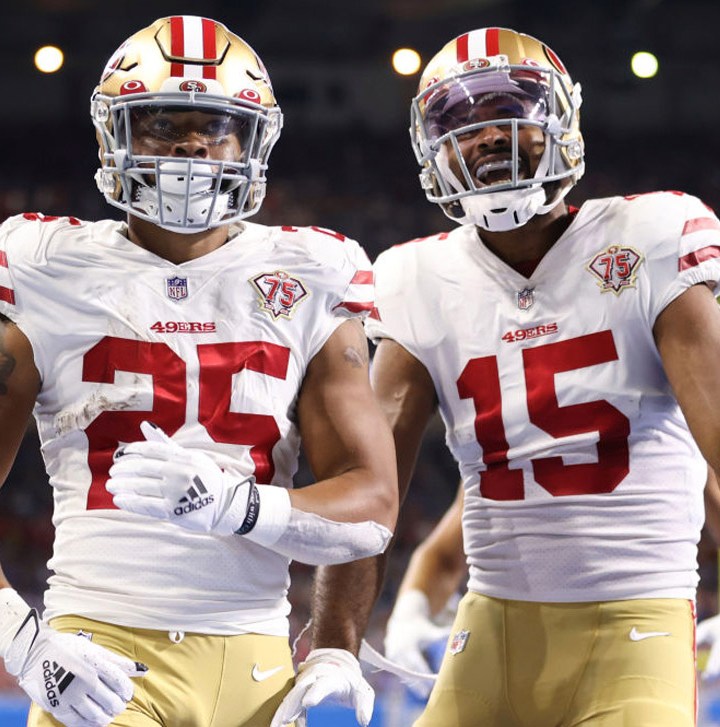 Mitchell stepped in for Raheem Mostert, who went down with an injury early in the game. The 2021 sixth-round pick out of Louisiana went on to break a week one rookie record, running for 104 yards and a touchdown in a win against the Lions.

There really aren’t too many Elijah Mitchell cards out there yet outside of ones in his college uniform—and Mostert is slated to come back in about 8 weeks—so being patient here is likely the best play. But if you think you've seen enough to buy some of his cards right now, the price is certainly right. 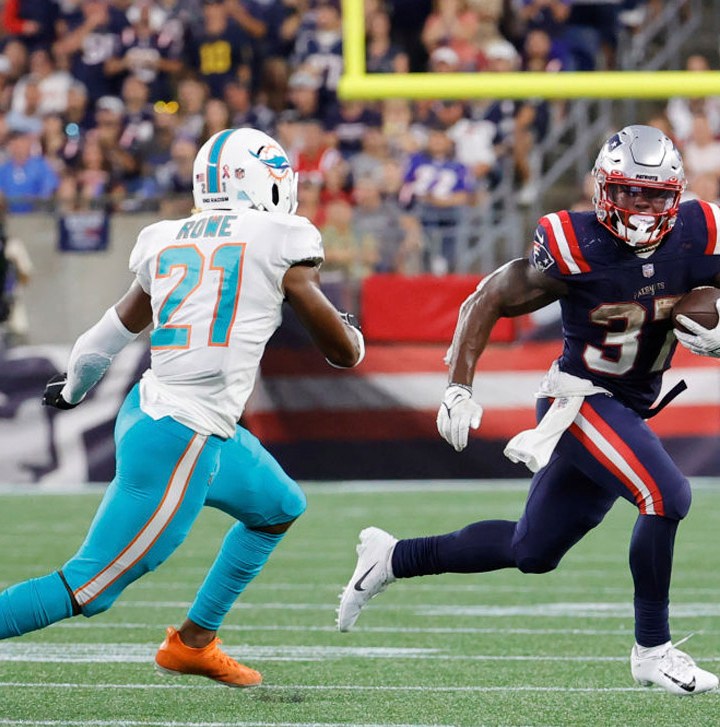 Harris had a big day until his fumble late in the fourth quarter deep in Miami territory cost the Patriots the game. With that said, his 23 carries shows that head coach Bill Belichick thinks of him as the bell cow in the Patriots' young offense. How long that'll be the case if he continues to fumble remains to be seen.

His cards are extremely inexpensive. You can even find some fun rookie autos like this one for under $50. If you think he can hold on to the No. 1 running back job and that the Patriots will go on a bit of a run, he might be an interesting play. 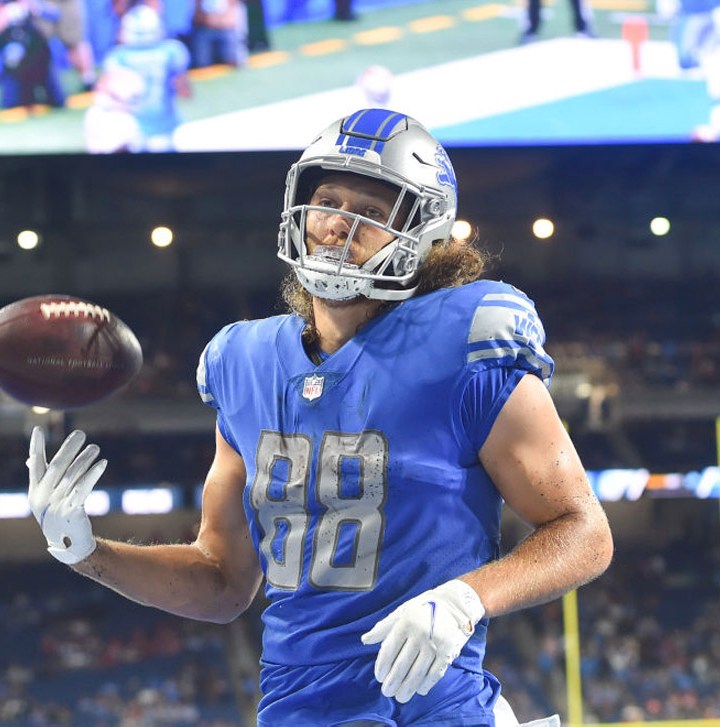 TJ Hockenson was selected in the first round of the 2019 draft by the Lions and his career got off to a slow start. He only played in 12 games as a rookie, catching just 32 passes for 367 yards and two touchdowns.

He had a much more productive season in 2020, logging 67 receptions for 723 yards and six touchdowns, leading some to speculate that a full-on breakout was coming in 2021. For at least one week, they were correct.

Hockenson has quickly become new Lions' quarterback Jared Goff’s favorite weapon; the two connected on 8 of 10 targets, once in the end zone. However, Hockenson is a tight end, a position that doesn’t typically command much interest in the card market. Also, the Lions' season doesn't look promising, so it’s not as if he'll have many opportunities to shine on the big stage like fellow tight ends Travis Kelce and George Kittle. That doesn’t necessarily make buying his cards a bad play—just keep in mind that there's limited upside.