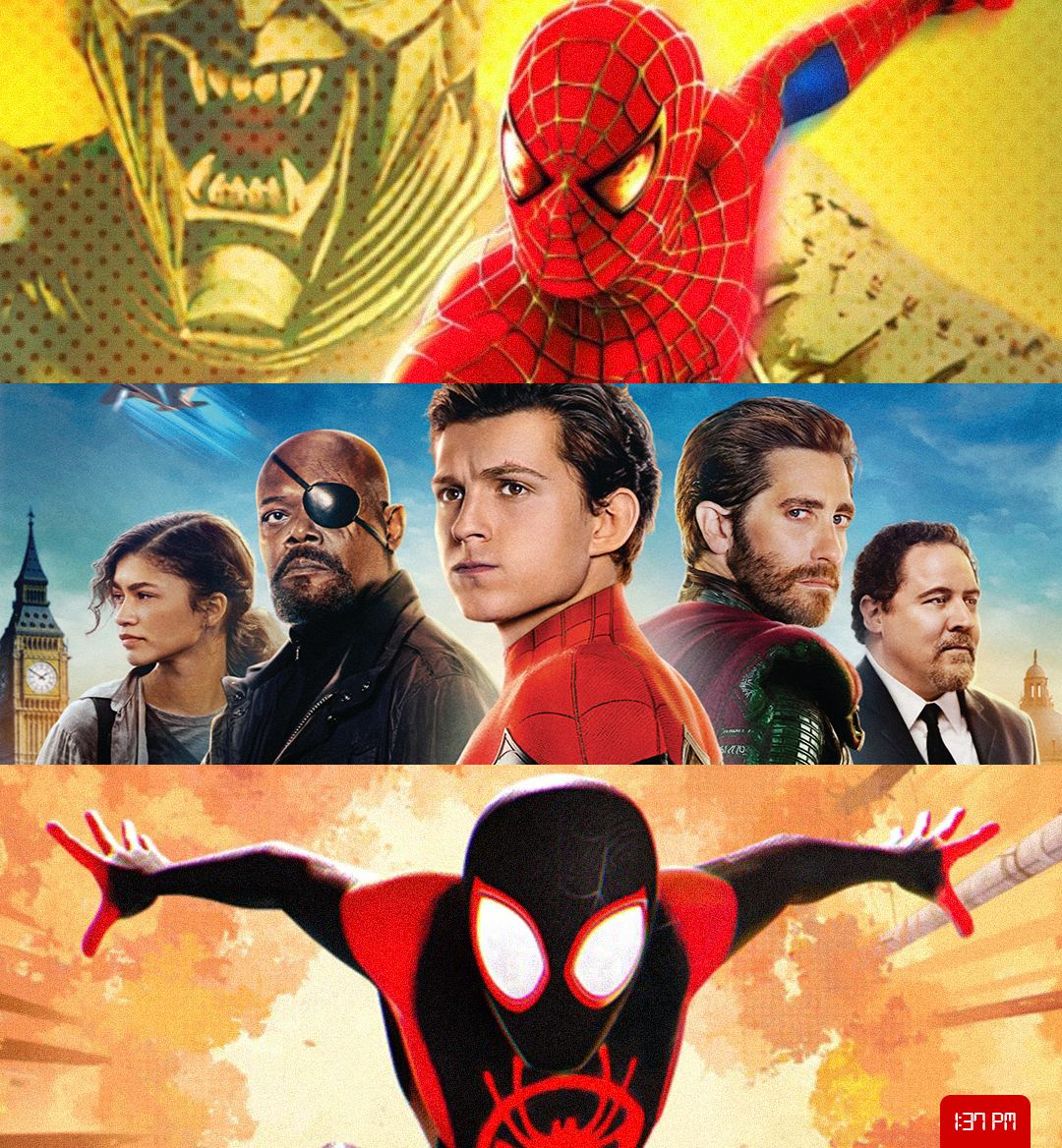 In almost 20 years, there have been eight Spider-Man movies spanning that time, from 2002's original Spider-Man to the most recent release in 2019 with Spider-Man: Far From Home. As Spider-Man: No Way Home is about to hit theaters on December 17 and with a teaser trailer for Spider-Man: Across the Spider-Verse (Part One) flying around on the internet, there's almost too much Spider-Man hype in the air right now—and too much use of the word, "Spider-Man," in this paragraph, too. But honestly, it's a long-overdue hype.

We've been on a bit of a Spider-Man hiatus during the pandemic, as the last movie from the franchise was released in 2019, so we've been holding on fairly tightly to each trailer that was thrown our way. We've powered through thus far, and given that the new film is only about a week away, we've decided to rank each Spider-Man movie in order.

Taking many different elements into account, some of the most important of those turned out to be the overall performance of Peter Parker, how inventive each movie was in its approach, and the film's portrayal of its villain. Many of the former villains from Spider-Man's past will actually be appearing in Spider-Man: No Way Home, which sheds a massive light on the fact that some of the only redeemable elements from a few of the Spider-Man iterations were its villains, namely in The Amazing Spider-Man 2 and Spider-Man 3.

Without further ado, take a gander at our ranked list of each Spider-Man film ever made.

A mostly terrible movie, The Amazing Spider-Man 2 introduces Electro (Jamie Foxx) as Spider-Man's main nemesis in this sequel to The Amazing Spider-Man. Given that the latter was actually a decent Spider-Man movie, the flop that this iteration ended up becoming was honestly a shock. As a side note, you haven't seen the last of Foxx's Electro: he'll be reprising his role in the upcoming Spider-Man: No Way Home.

Though not as tough to watch as The Amazing Spider-Man 2, Spider-Man 3 isn't much better. The main thing that this film has going for it is the fact that Sandman is such a cool supervillain to feature and ended up being a fan favorite among audiences. Although Venom was also in the film, he was a bit of a lame version of the villain, given that we've now seen Tom Hardy's portrayal in both Venom and Venom: Let There Be Carnage. Both the computer-generated and human portrayals of Venom in these films were much stronger than that of Spider-Man 3.

When the supervillains end up pulling the main weight of the film, there's a fair chance that it's due to a weak plot, which is exactly the case in Spider-Man 3. That uncomfortable and out of place dancing scene didn't help, either.

Though I'd say that The Amazing Spider-Man was actually quite the fresh take given that we were just coming off Spider-Man 3, there are still quite a few fans who would still prefer Maguire's Peter Parker to Garfield's. However, Andrew Garfield's first stab at the role shouldn't just be dismissed outright.

As a whole, the movie reignited the Spider-Man craze, making up for some of the losses and fatigue brought on by Spider-Man 3. Emma Stone's portrayal of Gwen Stacy was a welcome one at that; instead of continuing on with the MJ, Stacy's introduction brought a new flair to the series, as we had gotten to know MJ fairly well over the prior three films. The film also did an exceptional job in its build-up behind Dr. Curt Connors' transformation into The Lizard, who was played by Rhys Ifans.

Overall, The Lizard added a ton of dimension to the film, both physically and as a character, as he's a very different type of villain than the ones that we've encountered before in the previous Spider-Man franchise. The film had a deep focus on the relationship between Connors and Parker, as Connors was a scientist working with Parker's father at Oscorp Industries. Although the two have this mutual relation, it doesn't stop them from eventually becoming at odds when Connors transforms into The Lizard.

With Alfred Molina portraying a very formidable Doctor Octopus as the film's main antagonist, Spider-Man 2 is an overall solid sequel to the original Spider-Man, with some fans even claiming that it's better than the original.

The main plot involves Parker's involvement with Dr. Otto Octavius as a result of his friendship with Harry Osborn, given that Harry is the new head of Oscorp's research section. When Octavius' experiment meant to solve the challenges of lost limbs goes terribly wrong, he becomes under the direct influence of the robotic tentacle arms that are physically attached to him. Because it's controlled by the AI, it's almost impossible for both Octavius to remove the arms and for anyone to put an end to Octavius' newfound villainous ways. As things start to get truly out of hand with Doc Ock, Parker has to spring into action and defeat the villain.

Jumping off the success from Spider-Man: Homecoming, Spider-Man: Far From Home takes things to the next level, with Mysterio (Jake Gyllenhaal) serving as the main nemesis. Though some (myself included) were skeptical of Gyllenhaal taking on this role, he did an incredible job in his portrayal of Mysterio, who seems like an impossible villain for Spider-Man to beat until it's revealed just how Mysterio uses his powers.

The plot follows Parker after Avengers: Endgame, which has him still mourning over Tony Stark. However, when he goes on a class trip to Venice, Italy, he's able to take a small break from his mourning, though the break ends up turning into a full-time job for Parker when a weird weather occurrence starts to affect Venice. Though Quentin Beck (Mysterio) is able to save the city from what ends up being a water elemental creature, it turns out that Beck might not be as selfless as he seems.

Though Tom Holland's first foray into the Spider-Man world was in Captain America: Civil War, you could tell by that performance alone that Holland needed a solo movie. With Tony Stark torch lighting the way for high schooler Peter Parker to become more acclimated to being Spider-Man, it also served as an introduction for the audience into the new Peter Parker.

Homecoming follows Parker back in high school after he returns from his Spider-Man duties in Civil War. Upset that he's in school and not fighting as one of the Avengers, he starts taking on his Spider-Man duties by himself, that is until he needs some saving by Iron Man after encountering Adrian Toomes/Vulture. On the villain side of things, Michael Keaton puts on an amazing performance as Vulture, a totally sinister nemesis who also happens to be the father of Parker's crush, Liz.

2. "Spider-Man: Into The Spider-Verse"

Quite possibly one of the most beautifully-animated movies of all time, Spider-Man: Into The Spider-Verse goes to great lengths in launching the franchise into a completely new era. The comic book-like animation alone is incredibly inventive, on top of the inclusion of a slew of niche Spider-Man characters that quickly became favorites.

In this universe-bending animation, Miles Morales takes on the role of Spider-Man, but when he realizes that there are multiple different universes, it means that there are also multiple different Spider-Man-like people (and creatures). These bonus Spider-People include Spider-Woman, Peni Parker, Peter Porker, Spider-Man Noir, and Peter B. Parker. And given that there are all of these superheroes, there's also a ton of supervillains, like Doctor Octopus, Prowler, The Green Goblin, Tombstone, Scorpion, and the largest of all, Kingpin.

The O.G. that started it all back in 2002. Spider-Man changed the way we viewed superhero films and played a huge part in setting a precedent for similar movies to follow. Perfectly cast as Peter Parker, Tobey Maguire struck the perfect balance between superhero and nerdy high school student, which directly complemented Willem Dafoe as Norman Osborn, who may have possibly pulled off the greatest supervillain portrayal of all time (that is, aside from Heath Ledger as The Joker in The Dark Knight).

It's also as well-balanced as superhero movies come, with just the right amount of time spent broken up between action, love, the superhero himself, family, and the villain. Superhero movies sometimes gloss over the backstory of the main villain, yet Spider-Man established The Green Goblin in such a way that has had Spider-Man fans judging each movie in its wake in comparison to Willem Dafoe's performance.