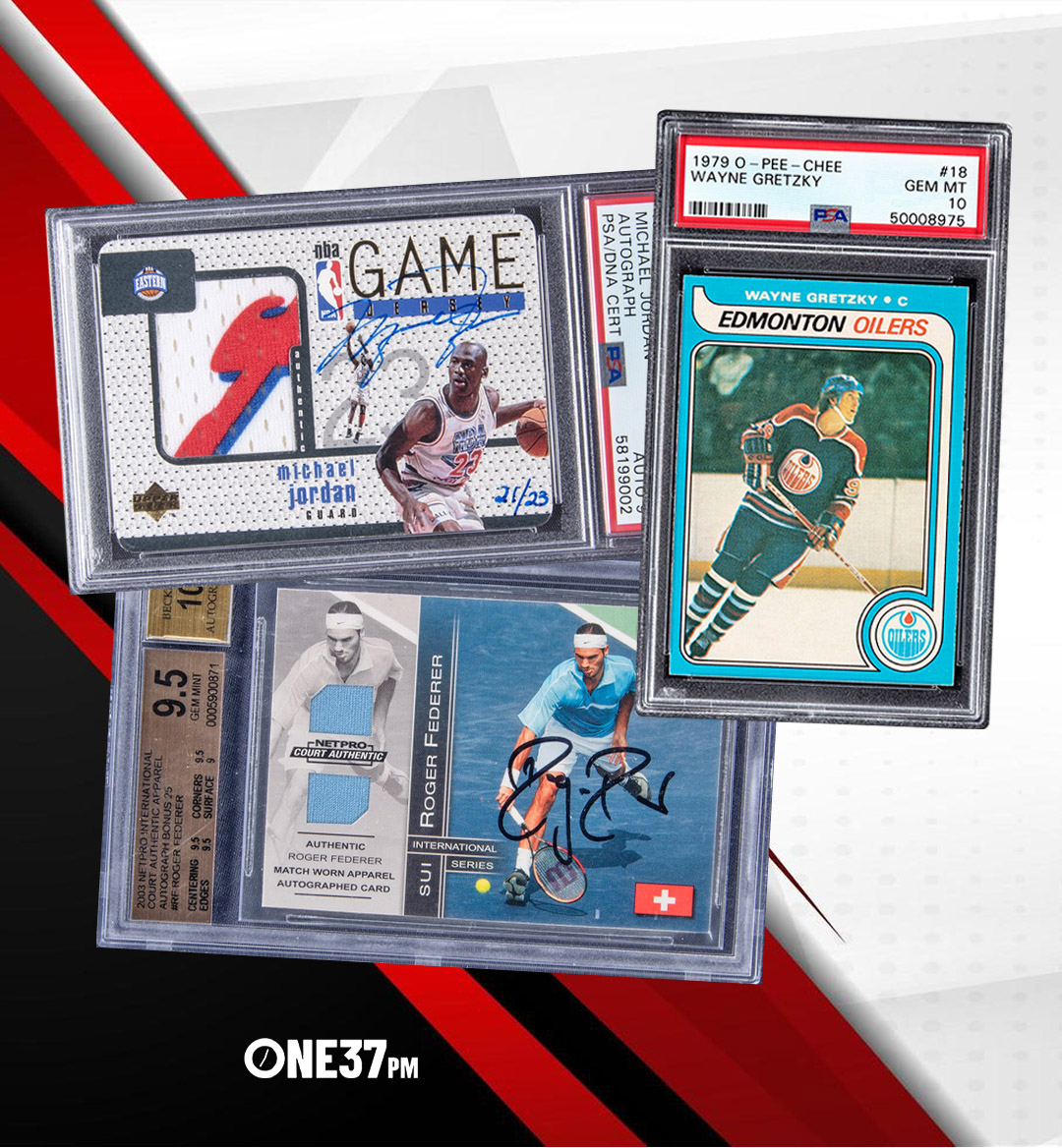 Many key cards that exploded in price in February and March have lost significant value (some more than 50%) and that’s left many in the hobby wondering if the market is crashing, and what could come next.

While it’s impossible to predict the future, we can take a look at some data as guidance for how the market is evolving.

Let’s kick it off with a recent record sale, which seems to have bucked the general downward market trend: 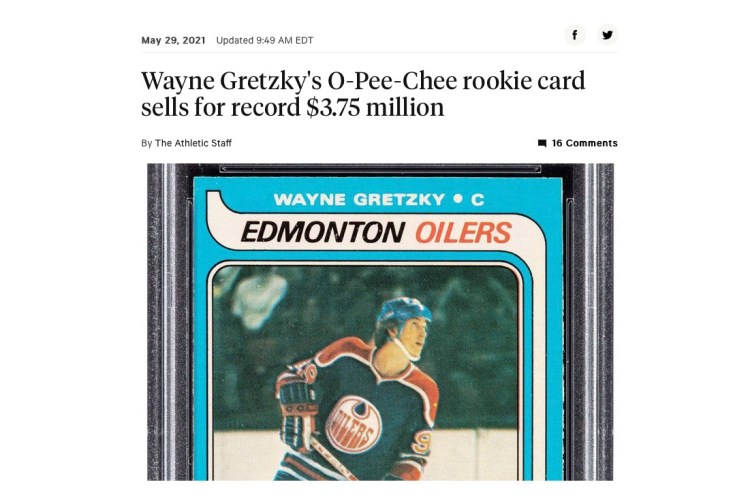 The record sale represents a 275% increase of this card’s value since the sale of two copies on December 11th:

I’ve been collecting cards since 1990. The market has changed tremendously.

If you’re a serious investor, you may want to consider investing a small portion of your portfolio in cards.

While the entire card market isn’t setting record prices, the Gretzky isn’t the only card to have a record sale in the past week:

An all-time record for any tennis card. pic.twitter.com/nqPBkTzguF

And finally, we have a record Michael Jordan card sale:

An all-time record for any Michael Jordan item of any kind. pic.twitter.com/mgoyOhLSca

While Jordan’s key rookie card (1986 Fleer) in PSA 10 has fallen 52% in value over the past few months, a rare non-rookie game-used jersey patch auto card set a record for any Michael Jordan card ever. This card is limited to just 23 copies, compared to the 316 copies of Jordan’s iconic rookie card the 1986 Fleer PSA 10.

This data tells us that it’s impossible to describe the general trend of the card market - between sports, players, and card types, sub-patterns are emerging in different pockets of the hobby.

Let’s dive a little deeper by seeing how far we’ve come since 2020. 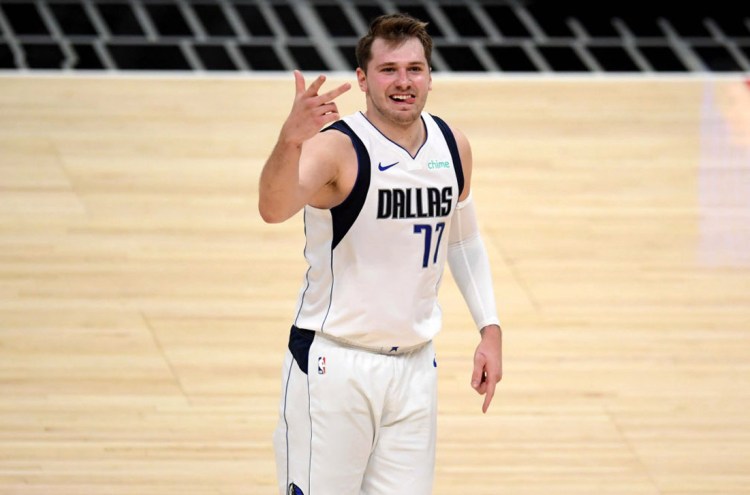 Playoff basketball can sometimes be a catalyst for price growth of key players on NBA teams contending for a championship. Luka Doncic was the 2020 NBA hobby darling and his Mavericks currently lead their series against the LA Clippers 3-2. 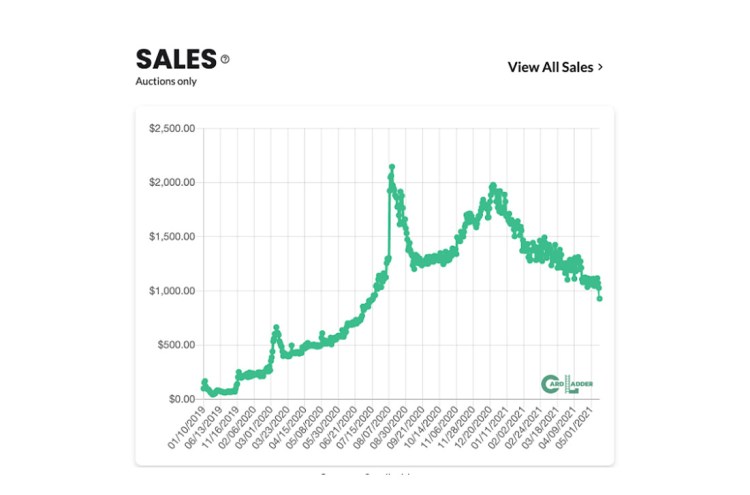 For those who have been in the hobby since 2018, the fact that this card is at $844 is still quite remarkable, especially given the population growth: 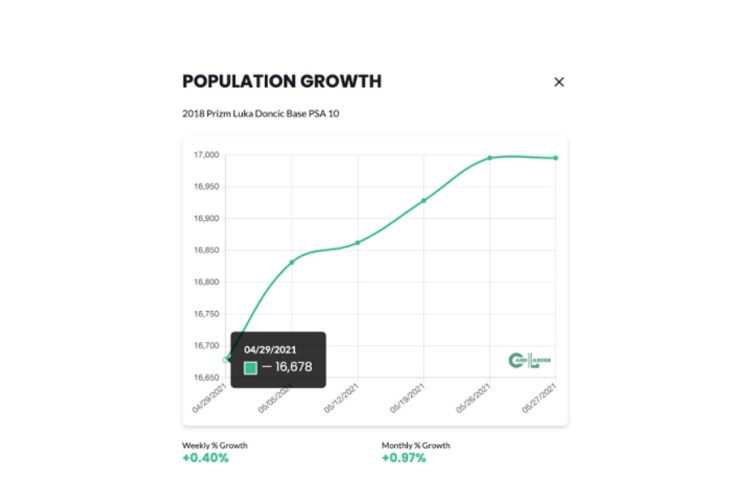 Despite the rapid population growth, the card is still worth 8x what it was just two-and-a-half years ago. While it may be down 53% from its peak, this data point alone should remind us that the hobby is much bigger than it was just a few years ago.

Note: I am not a financial advisor, but cards with significantly high population counts are subject to more volatility and risk. 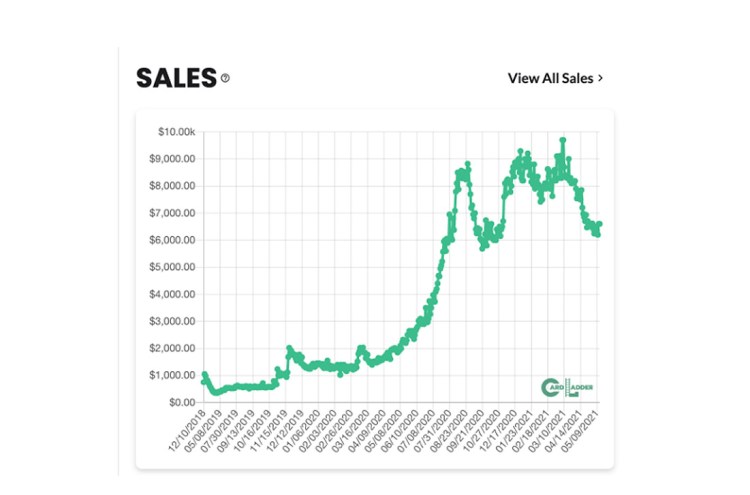 The card could’ve been had for just $755 in December of 2018. And in April of 2020, the card was selling for $2,000. Despite a gradual decline from the price peak, the card is worth significantly more than it was this time last year.

Both of these cards haven’t experienced any noticeable gain during the playoffs, and their high populations certainly pose a risk for continued price declines, but it’s clear that the market for these cards is significantly more robust than it was even just a year ago.

There’s another young, popular NBA player currently in the playoffs with a similar trend to his cards, Giannis Antetenkoumpo: 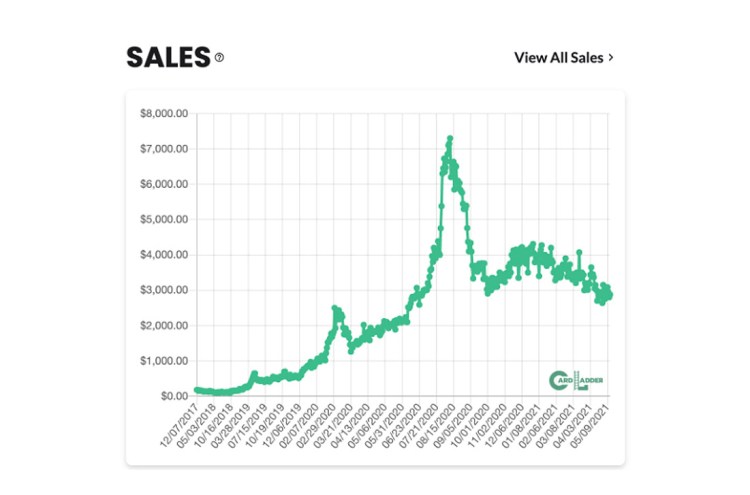 Antetenkoumpo’s base Prizm PSA 10 has fallen 71% in value since it’s peak last August and doesn’t seem to be getting any kind of price bump with playoff action.

The lower population (75 copies) Silver Prizm was less affected by the price drop than the much higher population base prizm, which should be a clue for all collectors and investors as we think about the future of the hobby.

It’s not all doom and gloom for playoff basketball stars, as Kevin Durant’s rookie Topps Chrome Refractor PSA 10 ticked up 6% in value toward the end of April: 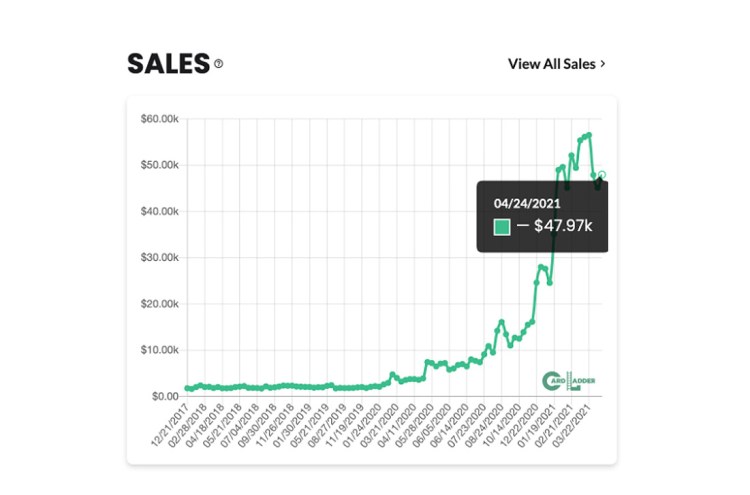 This particular card has 188 copies in PSA 10 and is only down 15% from its peak in March. It is one of the few cards that hasn’t sustained the price drops of other superstars like Lebron James, Kobe Bryant and Michael Jordan.

While many cards have gone down in value for various reasons, it would be impossible to claim the entire market is crashing, softening or growing.

Looking at another playoff star, Joel Embiid, and his Prizm Silver PSA 10 rookies are nearing its price peak of $5,700 in March: 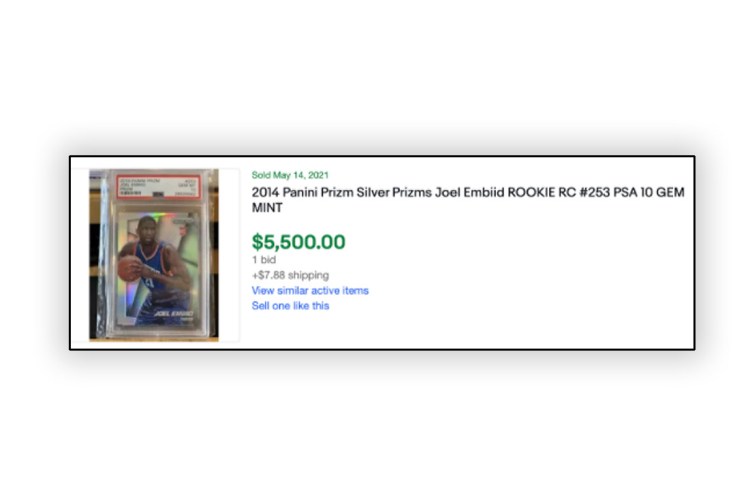 Two years ago, you could have purchased just about any card and it likely appreciated in value in the time since. However, it’s clear that the market has hit a peak, and finding opportunities has gotten harder, but it is not impossible.

Not Everyone Bought At Peak Prices: It Shouldn’t Be The Only Metric We Use To Determine Hobby Health 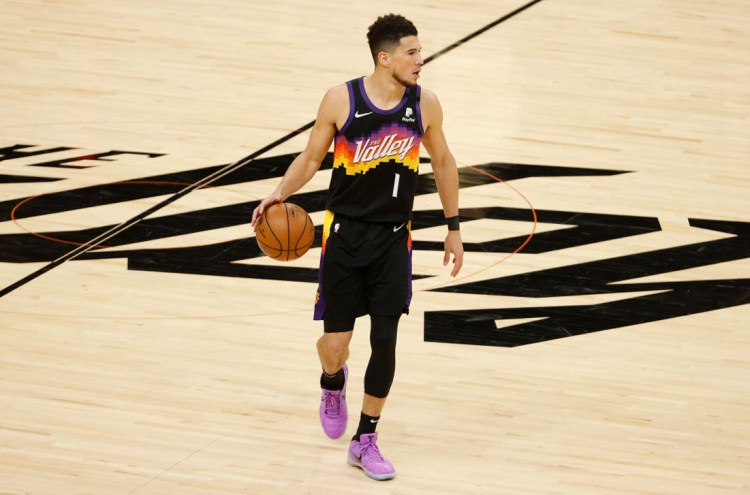 Devin Booker’s Suns just knocked off the Lakers, and his Prizm Silver PSA 10 prices are starting to increase in price: 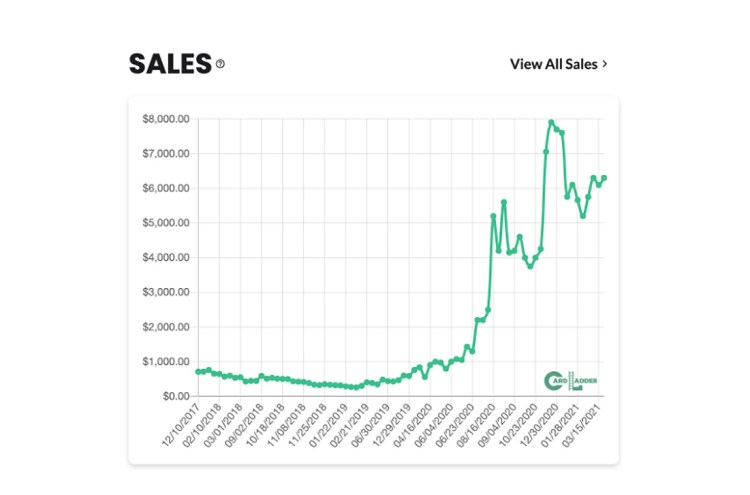 The latest recorded sale on Cardladder was for $6,300 and there’s currently a copy at auction on eBay with the latest bid of $6,100: 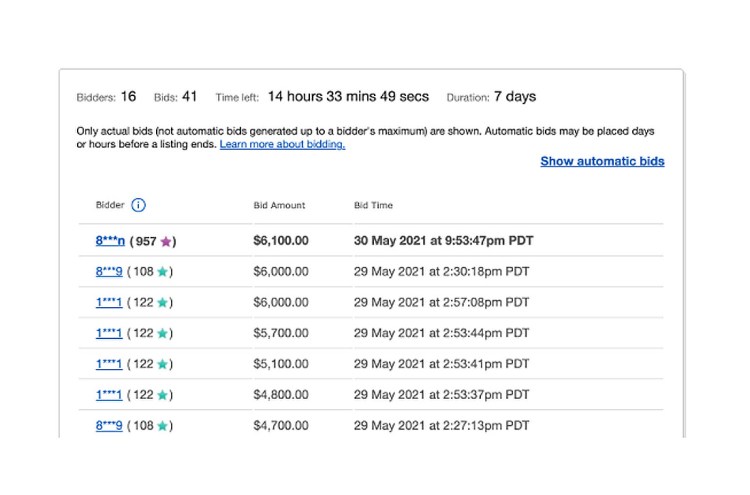 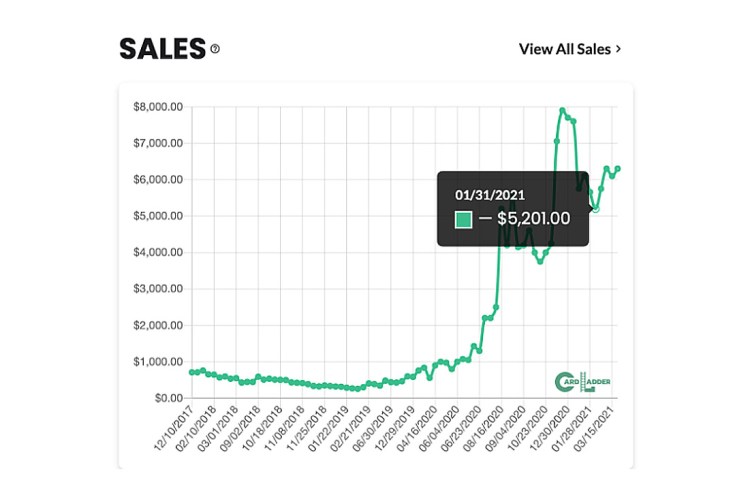 Not everyone bought cards at peak prices, so it shouldn’t be the only metric we use to judge the current health of the hobby. This card has a population of 168, and only 5 sales were recorded above the current price of $6,100. In 2021 so far, 4 copies were purchased below the current price.

50% of buyers may see this as a downturn, with another 50% of buyers who hold a card that has appreciated in value.

Embiid’s Silver Prizm PSA 10 has a similar trend - you could have purchased that card in early May for around $3,200 and if you sold today at current values, you would have a 71% return. There was only 1 sale above the current market price, so apart from 1 buyer, there are currently 7 copies of that card purchased for significantly less than what it was worth at peak.

It’s easy to use peak price and a regression from that price as a standard measure of health and demand in the hobby, but these two examples quickly dismiss that metric as our only way to evaluate the card market.

So, what’s the conclusion? 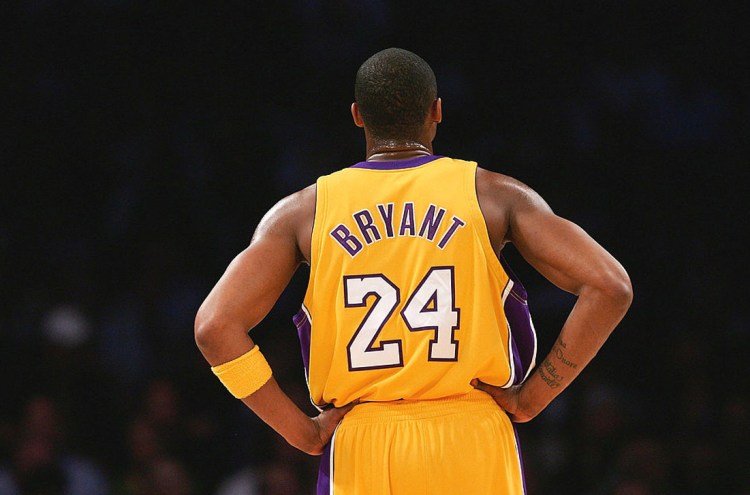 We first need to understand that not all record sales are created equally. I frequently see posts from Cardladder about record sales for cards (which is amazing) but sometimes a card hasn’t sold in over a year, and the price is naturally catching up to the new market demand. 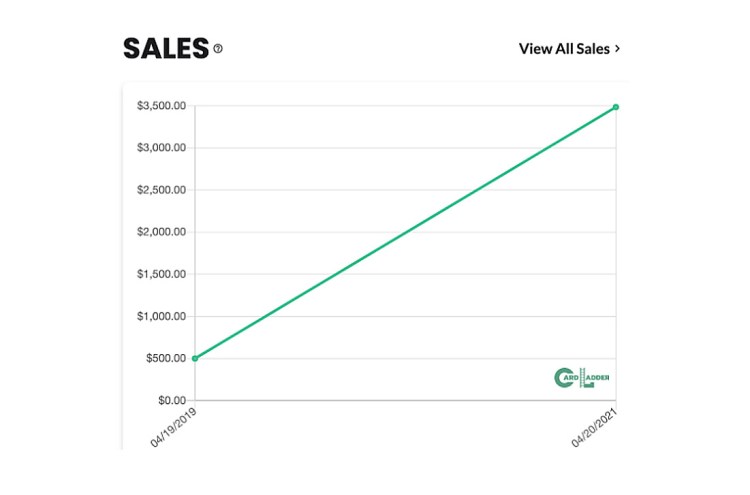 The card has a population of 14, and the card has sold just 6 times since 2008. In cases like that, it’s the card catching up to the market.

But we’ve also learned that record highs and peak prices are not the end-all metric to define market growth or market softening. More people have bought below peak prices than at peak prices.

We also learned that higher population base cards have seen a consistent decline, while shorter print Silver Prizms have been less vulnerable to price volatility.

Overall, the market is much larger than it was 2 years ago. Because of that, we’ve seen the population of certain cards explode. The data shows, especially in the case of the Luka Doncic Base Prizm PSA 10, that the higher the population, the lower the card price.

There are still plenty of opportunities for buyers - be wary of peaks, remember that population matters and is growing as PSA catches up on orders, and that truly collectable cards still reign supreme.