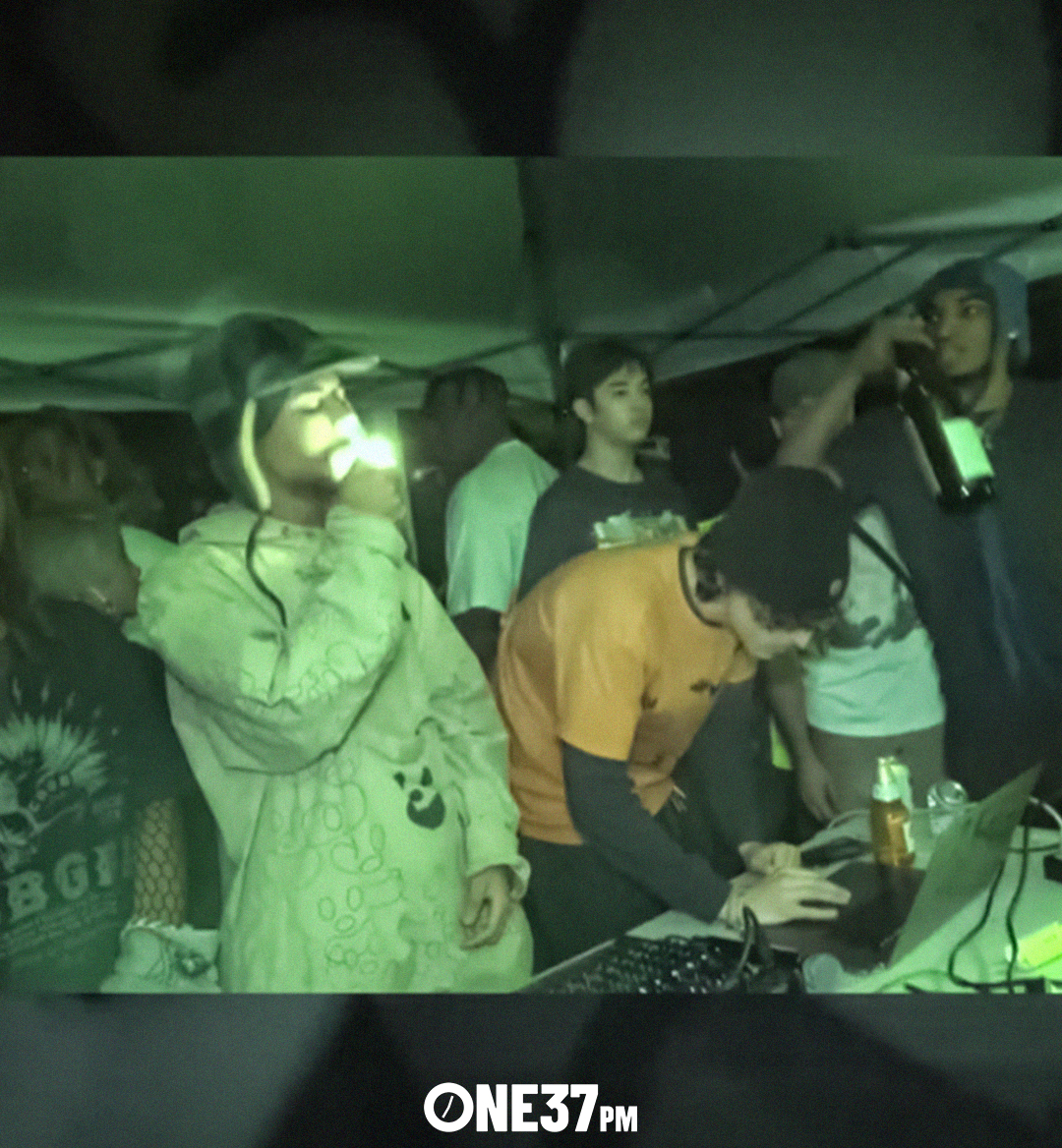 Surf Gang is a New York-based collective dominating the underground hip-hop scene with Lil Polo Tee (Polo Perks), Evil Giane, Moh Baretta, Harrison, Caspr, just to name a few. This powerful group has led them to perform across both coasts of the United States, with concerts across New York City and Los Angeles.

Surf Gang is coming off a hot summer, performing numerous shows, releasing two projects, several singles, and receiving a lot of praise from social media and publications alike. Their song "cinderella" with Lil Polo Tee, babyxsosa, Bobainee, Moh Baretta, and producing credits from Evil Giane, off of SGV1, stands at the forefront of their tracklist. This is due to the song's unique production and ambidextrous flows from several different vocal artists.

Another contribution to the collective's success is the runtime of their songs, with most of their tracks running under two minutes. For example, in SGV1, there are fifteen tracks with a twenty-seven-minute runtime. This contributes to replayability and is a benefit for the listener's attention span.

Polo recently sat down with Mike Boyd of the Monday To Monday podcast with Mike Boyd to discuss SGV1, along with his latest music video for "6am" and the meaning behind it. Be sure to tune in below!

We talked to Alex Hall (@triple6hall on Instagram), a videographer and fan of Surf Gang, about Surf Gang's most recent shows in New York City and what makes them unique.

1. What was the on-stage energy like at the show?

The on-stage energy was incredible, from Polo Perks and his star-studded supporting acts RealYungPhil, Dee Aura, Texako, and with sounds from DJ Rennessy. They all bounced off each other, amazing unifying energy. Commanding attention from each audience member with effortless stage presence. It felt just like you were hanging on every song, word for word, as Polo and the rest of the friends and crew’s energy was on 100 percent the entire time as soon as they hit the stage. It took the crowd a bit to warm up and really start to blow up, but it was something special once it did.

2. How did the crowd react to the performance?

The crowd's reaction to the performance felt like a true mix of dedicated fans that came out solely for this performance. As well as those new to Surf Gang and their music attracted by Boiler Room's festival, this may have been their introduction to Polo Perks and his support. Every eye was on the stage with much anticipation as they began performing. Polo and crew, with every song, bring the energy continuously as they continue playing. Never relenting energy as every track goes by with mandatory moshing upfront and screaming the lyrics. As Polo played tracks such as "i91," "Ilovenewyork," "polo perks evil," and "Snowpatrol," the energy was palpable and really was something to see. Polo's guest stars were incredible highlights as well. Dee Aura, a great drill artist performing his Surf Gang-produced track "Get Back," and it went up completely. Additionally, as Texako performed his tough hitting track "Wocky Slush" and the RealYungPhil viral track "AintBoutNun," it had everyone upfront screaming word for word.

3. What do you think attracts people to Surf Gang the most?

Surf Gang is genuinely a breath of fresh air to the country's underground rap scene. But they won't be underground for long at this rate. They are by far the most exciting group coming out of New York City. Their music features great versatility amongst each member and a fresh new sound. Each artist featured in Surf Gang has a unique style of their own. This is what makes them special. While every artist rapping in Surf Gang seems to bounce off each other, they blend seamlessly with their top-tier production from the group's super producers, creating a sound displaying some of the most talented artists in hip hop music today.

Personally, I'm a massive fan of Surf Gang. I was first introduced to the group initially through one of the members known as "ppgcasper" on Soundcloud. He's known now simply as "Caspr" and has recently been dropping singles with blink-182's Travis Barker in addition to his contributions to the group's newest group project Surf Gang Vol. 1. As time goes on you discover each and every member of Surf Gang and realize there are no weak links and they are indeed the sum of their parts but individual stars in their own right. But at the same time they are all individually talented with their own sound collectively. So if you got a group of Surf Gang fans in a room and asked them which member is their favorite, you'd most likely get a different answer from everyone. Polo Perks' Punk Goes Drill is an era-defining project. Dropping at the top 2021 featuring throwback samples of classic 2000's tracks such as the Yeah Yeah Yeahs' "Maps," Foo Fighters' "Everlong," Blink-182's "Adams Song," and My Chemical Romance's "Helena." Surf Gang's magical producers rework these samples with hard-hitting 808s and drums that reinvent the pieces in such a way that breathes a new life into them and has you feeling a distinct nostalgia that Polo's performance just brings to a new level. It's one of the best rap projects to come out in years. Soon their collective's first album together dropped in late June to critical acclaim. Other game-changing artists from Surf Gang to check out with their own distinct sound individually are Moh Baretta, Harto Falion, Bobainee, Pasto Flocco, and Caal Vo. Their producers are also next level, with Evil Giane, Eera, Goner, Harrison, Tommytoohotty, and Skrap making up the in-house roster.

4. In your eyes, as a listener, what makes Surf Gang so unique?

What makes Surf Gang so unique to me is the intersection of culture they sit at. They can bring together a group of dedicated rap fans and crossover musical appeal to fans of alt and emo, skateboarders, graffiti artists, photographers, videographers, models, stylists, clothing designers, and real people with real-life problems. They can all come together and share in this movement that feels distinctly like a shooting star moment in time. Where the sky's the limit for Surf Gang and their fans. The love and support the fans give and the mutual love and support they show their fans right-back is beautiful to see. The city of New York feels alive again with new emerging talent, but Surf Gang is something we've genuinely never seen before like this. The future releases from every one of the group's members are a highlight to be anticipated.

5. What made this concert different from any other concert you've been to?

What made this specific show unique was definitely the Boiler Room and Half Moon outing itself. Polo and the rest of the crew definitely fit in perfectly with this fantastic crossover of youth culture in the audience and its performers amidst New York Fashion Week on a beautiful Brooklyn day. A lot of talent was in the building, including great underground rap artists and DJs seen casually enjoying themselves amongst the fans of boiler room's eclectic lineup. But to truly see a Surf Gang show, I'd recommend you watch them headline. It's truly a marvel. The NYPD shut down their previous free performances suggest the riot-like energy they expect from hardcore fans and forcing the group to pick up to the next location and have hundreds of fans in a frenzy to find the next performance spot. The group loves their fans and does everything they can for them and comes through in a junkyard in Brooklyn atop a fleet of school buses on a hot summer night to hundreds of excited fans. It's like nothing I've seen before, this show from Polo Perks and crew at Boiler Room feet was just a taste of what the group can offer with its members individually, but like I said, the group's shows as a collective are magical.

Shout out to Alex for the interview and for being able to provide some killer videos of their shows. Be sure to check him out below.