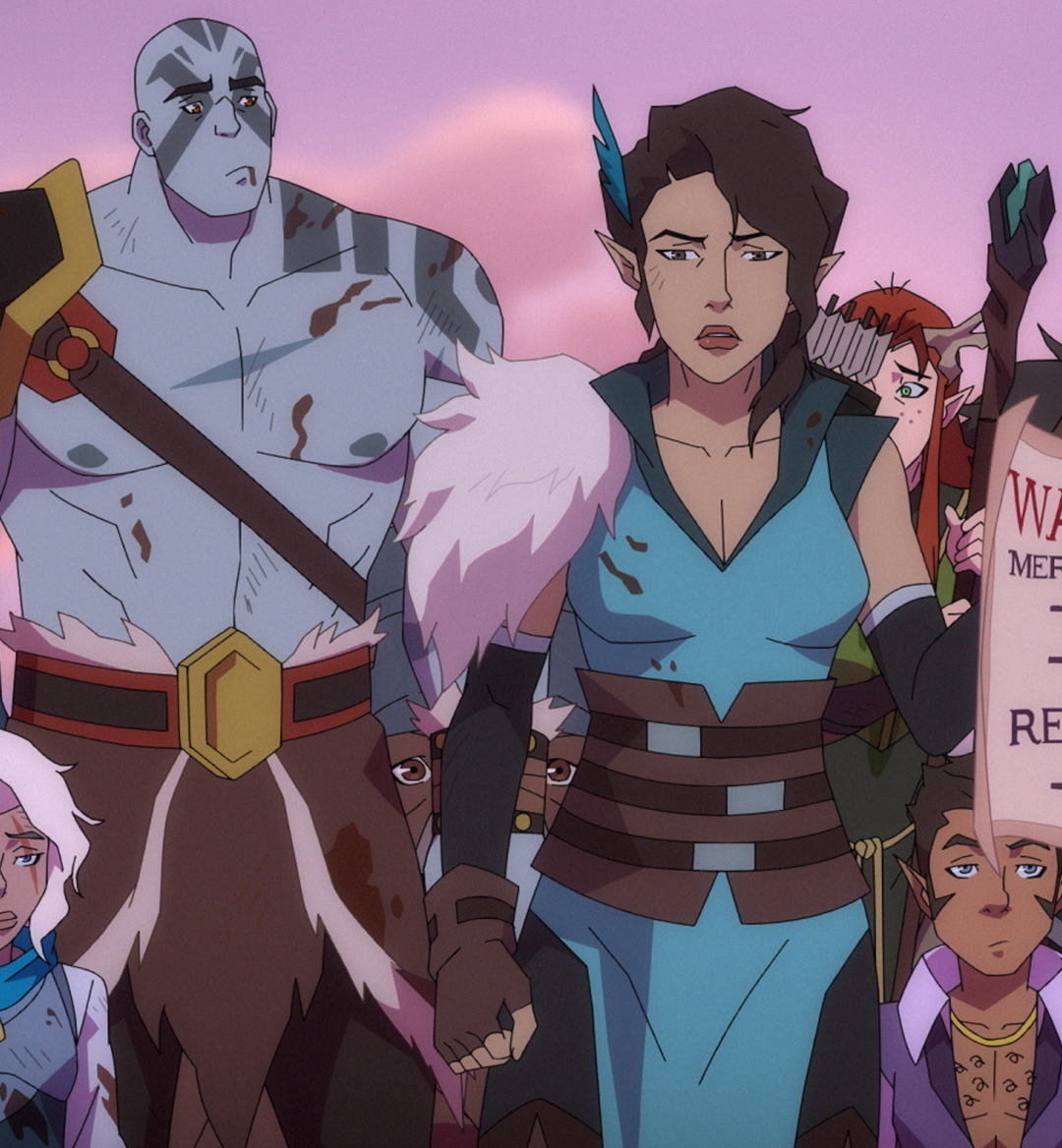 Have you heard The Legend of Vox Machina? Originally, it was a story spun by Dungeon Master Matthew Mercer, tracing the travels and trials of a mercenary band across the countryside of Tal’Dorei, one of the many continents of the world of Exandria. Now, The Legend of Vox Machina is premiering on January 28th, 2022, as an animated adaptation of the campaign on Prime Video, voiced by the original Critical Role cast members, bringing new life to a world previously visualized through fan art, animatics, and the theatre of the mind.

For the uninitiated, Critical Role is a Dungeons and Dragons web series broadcast on Twitch set in Matthew Mercer’s homebrew world of Exandria. In March of 2015, Matt converted a 2-year-in-progress Pathfinder campaign into a Fifth-edition ruleset Livestream starring his friends and fellow voice actors.

Liam O’Brien (Art Dad), most present in my childhood as the voice of Gaara in Naruto, plays Vax’ildan Vessar, the half-elf rogue who slides through shadows and throws daggers in threes. Vax is a practical prankster and clinical assassin set on protecting his sister; Liam is one of the most thoughtful and affectionate men in the world, hell-bent on annoying Laura Bailey.

You may know Laura from her recent work as Abby in The Last of Us 2, but my fondest memories are from her work as Tohru Honda in Fruits Basket, Keiko in YuYu Hakusho, and Chun-Li in many of the Street Fighter games since the release of Ultra Street Fighter IV in 2009. In the show, she plays Vex’ahlia Vessar, the half-elf ranger who arcs arrows with absolute accuracy, twin sister to Vax. In the same way Vex’s bargaining blurs the lines between being the group’s treasurer and Laura being the world’s best professional flea marketer, so does Vex’s quick wit and sharp tongue, as Laura has shown throughout multiple campaigns that she is as bright as days in the Fae realm are long.

Sat next to her, ripping stress balls to shreds, waiting for shopping trips to end, and always ready to press the red button, is Travis Willingham. If you ever watched FullMetal Alchemist, he was the voice of the flame-wielding hot-tempered Roy Mustang. Though Travis is a muscular giant who can bounce his pecs with the best of them, he plays an even grander goliath barbarian named Grog Strongjaw. Grog is, shall we say, simple. He drinks hard and hits harder, but if you asked him how many heads he has hacked to bits, Grog would probably start counting on his hands and lose count after the pinky. Both Grog and Travis are gentle giants who find their strength in their friends, but not without a gentle tap to the knackers every once in a while.

Across the table is Sam Riegel, the class clown of the group who is always, always, running a long con. On sick days and Saturdays, I would watch him on 4Kids as Donatello in the original Teenage Mutant Ninja Turtles and Tristan Taylor in the Yu-Gi-Oh! series. In the show, he is the voice of Scanlan Shorthalt. Although the gnomish bard is short in stature, his personality is almost as large as his cube; the master of charm, pursuer of puns, and player of hearts is, at the end of the day, a horndog. But Sam is a subversive player, always sneaking a serious understanding of storytelling nuance and complexity into his character arcs, denying opportunities to sway the outcome of events into his favor (because natural 1’s are fun), and undermining the viewer’s perspective of a shallow character with an extreme amount of depth. 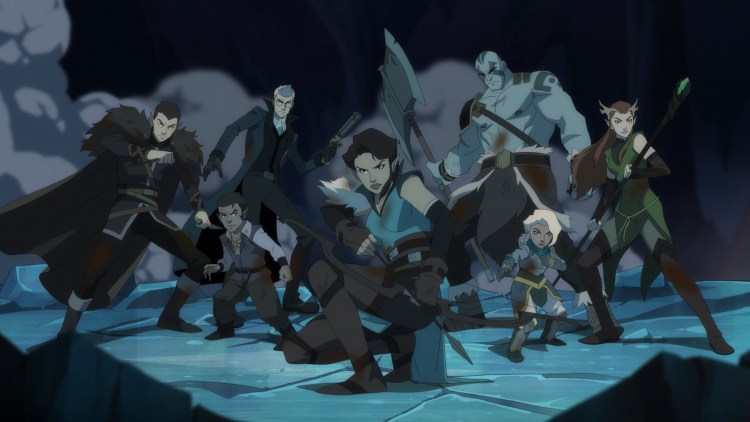 Then comes the anomaly, Taliesin Jaffe. Taliesin is a 3000-year-old cosmic entity from another dimension who came to our plane to spread the wisdom of ages. Jaffe voice-directed the game that introduced me to fighting games and the larger fighting-game community, Ultra Street Fighter IV, and voiced Blanka and Adon in the same. He plays Lord Percival Fredrickstein von Musel Klossowski de Rolo III, the human gunslinger extraordinaire, more commonly known as Percy. Percy introduces a more vengeful and aggressive take on life to the group, with the brevity and resolute sternness of royalty. As a remorseless self-expresser and lover of the darker underbelly of life, Taleisin is best described in comparison to Aves. Most birds imitate the vocal patterns of humans. Taliesin Jaffe imitates birds, and by the Everlight he does it well.

Next is Marisha “Sleeves are Bullshit” Ray, who is the peerless investigator of the group, constantly taking notes and trying to solve Matt’s riddles (sorry Nott, sorry Jester). Although I personally wasn’t familiar with Marisha before Critical Role, her extreme attention to detail as the Creative Director for the web series showcases the beautiful way she works - the new set for campaign three with the weather and lighting effects is just… Marisha, it’s amazing. In the show, she plays Keyleth of the Air Ashari, the half-elf druid who, quite like the Lorax, speaks to the trees. Though Keyleth is on a journey of duty, a voyage that, upon completion, would make her the leader of the Ashari, she doesn’t yet resemble a leader. As Patrick Rothfuss said and I extend, both Keyleth and Marisha have the heart of a gardener: they understand growth, change, impermanence and imperfection, and that is simply why we love them both.

And finally, though oft blindsided by prior acting obligations and thus absent from the table, comes Ashley Johnson. She is the voice of Ellie in both The Last of Us and The Last of Us 2, Terra in Teen Titans, and Tulip in Infinity Train, but in the show, she plays Pike Trickfoot, the gnomish cleric of the Everlight. The soft-spoken voice of good and reason often lies in wait, observing her friends and waiting for the moment to reveal either a profoundly deep aspect of her character or the joke that no one else has thought of but her. Like Travis, Ashley has the potential to be extremely chaotic; she’s quiet, and she’s dangerous. 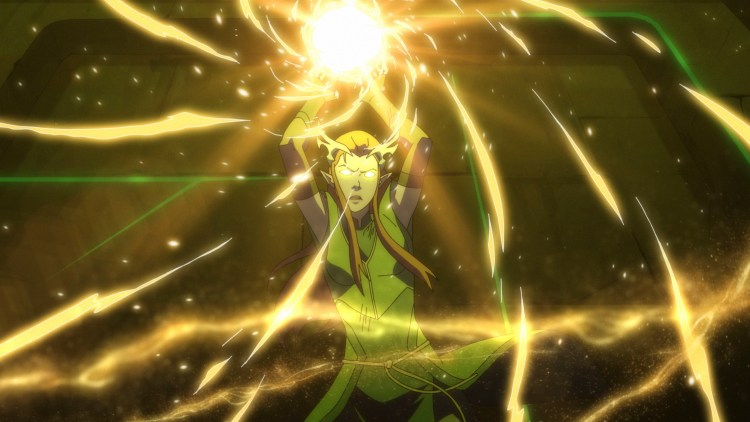 This is all for context, not only of the characters you will see in The Legend of Vox Machina, but also paint the history of the show, and why fans are so invested in a proper adaptation of the source material. Not only do we care for the characters, we care for the players. This is years of dedication to something that may have seemed silly to outsiders, culminating in the production of an animated series based on Matt’s world and the player’s characters.

But adaptations are always a trick to balance. Between appealing to veteran loremasters seeking accuracy and good faith, beginner viewers looking for a reason to connect to the characters, industry executives with a formula for success and less familiarity with the canon, and the cast who are deeply emotionally attached to their characters proper representation, there is simply a lot to contend with.

So, to start, let’s focus on the art direction.

The mixed 2D/3D style present in The Legend of Vox Machina feels right. The animation style resembles that of Avatar: The Last Airbender, or The Legend of Korra, where large set pieces are 3D, and everything else seems hand-drawn. The fight scenes are fluid, the composition of shots displays the ensemble gracefully, and much of the character’s personality is displayed through background actions and expressive movements. It’s the right direction to take a show with such a storied history in American voice acting. (And although I wish not to say much, be on the lookout for references to all the campaigns hidden throughout the visuals.)

The character design is, without a doubt, proper, and I say it as such because we have had character art, fan art, animatics, art books, and miniatures representing their design for years.

If the character design strayed too far from earlier representations, it would instantly feel off, and it doesn’t. 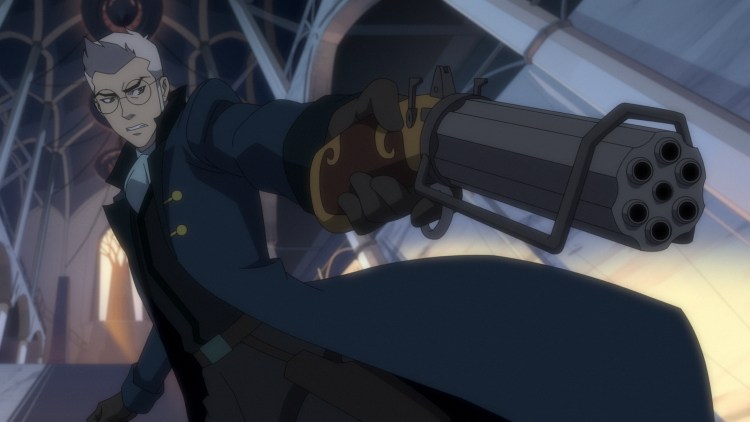 Alas, this feeling may appear when a veteran listens to some of the voices. I can only guess as to the reasons why this may be, but Grog sounds a smidge different. It is in no way off-putting, but a veteran may have a knee-jerk reaction to Grog being, from a layman’s point of view, a bit less gravelly. Just to recognize the possibility, it is potentially due to the sonic characteristics of the microphones used during recording being different from those on the set of Critical Role, but I think it is more likely a choice made to differentiate Grog’s iconic “I would like to rage!” battle cry and the associated rage state, from his calmer, gentler persona outside of the rage. It is different and potentially jarring at first, but the choice is motivated and only serves to elevate Grog’s on-screen presence. Past that, the voice acting is spot on, with only a tiny bit of performative clarity added on to what is usually a more casually performed improvisation.

Matthew Mercer has made a consistent theme of the nature of fate and choice throughout all of the campaigns. To me, if the outcome of events changes because an executive thinks it tells a better story and checks off boxes on their beat sheet, I would be remiss not to criticize it. Luckily I sheathe my blades at this moment as it seems the creators of the show feel the same.

Although small details of circumstance have been altered to simplify the show for the beginner, larger moments of consequence play out in immense detail. As I said previously, Percy tends to deal in remorseless aggression, and while the show’s animation takes inspiration from Avatar: The Last Airbender, the show’s tone does not.

In the source material, there is room for both humor and darkness. Throughout a three-hour episode, the pendulum will swing from a legendary performance by Scanlan to a violent dismemberment by Percy, back to Grog wishing people bidet, to a moment of extreme emotional vulnerability from Keyleth. The show does not shy from this.

The pace of the show is delightfully quick, with bouncy dialogue, and switches between these aforementioned tones at a remarkable rate. It’s different from what you see in most things on the popular market, and it’s so refreshing because of this.

It’s new, it’s exciting, and I think that is the truth behind The Legend of Vox Machina.

This is the first-ever adaptation of a Dungeons and Dragons campaign to a visual medium. Not only does the show depart deliberately from the norm by carving this path through independent storytelling, but Matthew Mercer and the cast of Critical Role have also set a precedent for other storytellers to find their voices.

And that’s the goal, right? Over the summer, we saw Exandria Unlimited, a show in the same world of Exandria created by Critical Role, with a new Game Master, Aabria Iyengar. With a new story came new friends: Robbie Daymond, Aimee Carrero and Anjali Bhimani. And with new friends, came new life, new representation, and a promise for more guests and more diversity.

It doesn’t stop there. With sourcebooks outlining the world of Exandria, anyone and their friends can find their voices through storytelling in this wondrous world.

This is the goal of Critical Role and The Legend of Vox Machina: to help people find their voice.

I've found my voice over the years of watching people make choices and live the consequences, mediate tense relationships, fall in love, make enemies, and represent the often underrepresented.

This is the first adaptation of a modern oral story, but it isn’t the last.

As always, remember to love each other.

Is it Thursday yet?