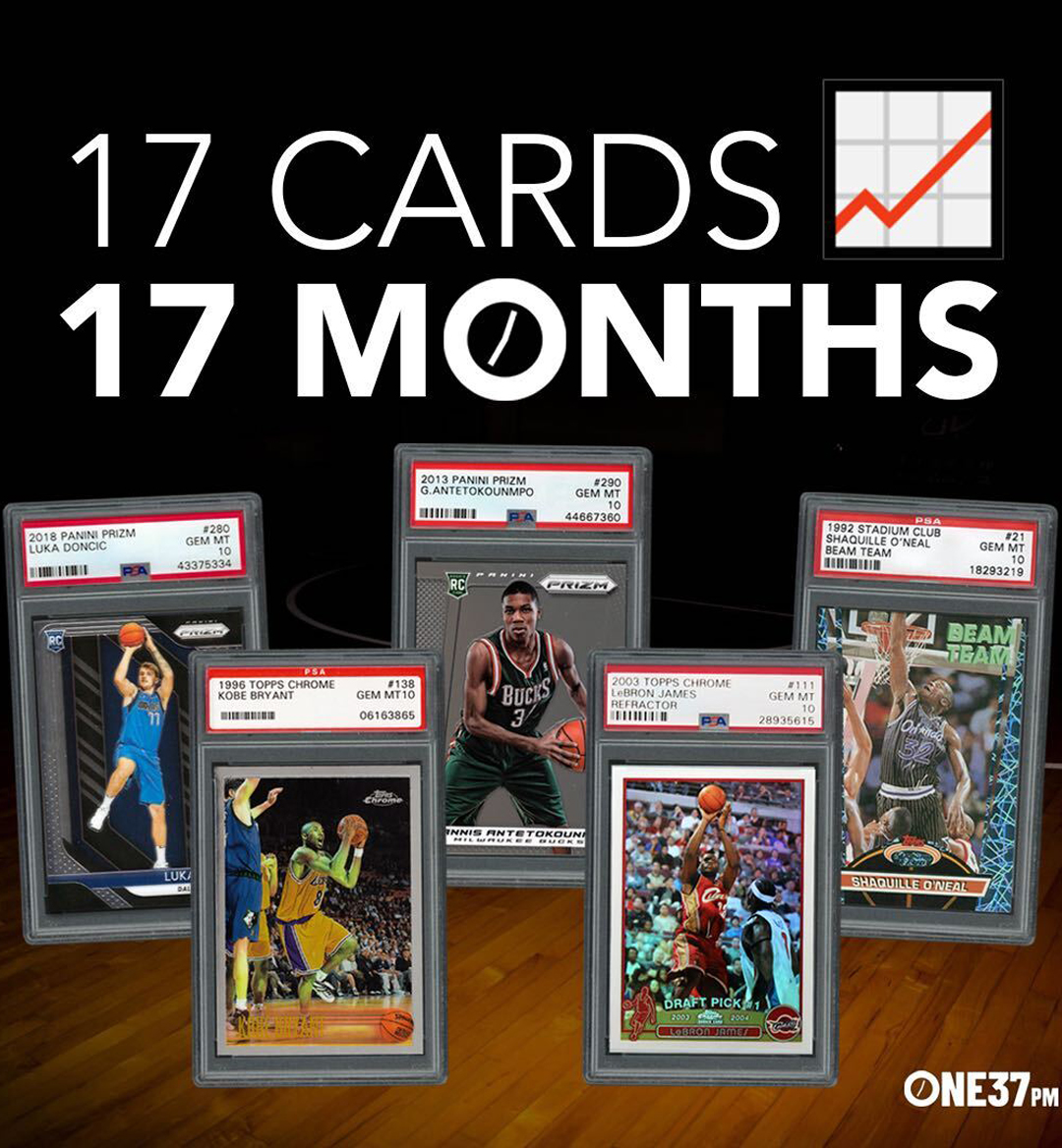 This article about the best basketball cards on the market right now was written by Gary Vaynerchuk, Raghav Haran, and Tyler Schmitt.

Before we go into these 17 cards below that have seen crazy spikes, and before you read other articles like this on ONE37pm, just know that the entire collective sports card market has completely exploded in the last 24 months.

These are just 17 that we’re fascinated by here at ONE37pm. 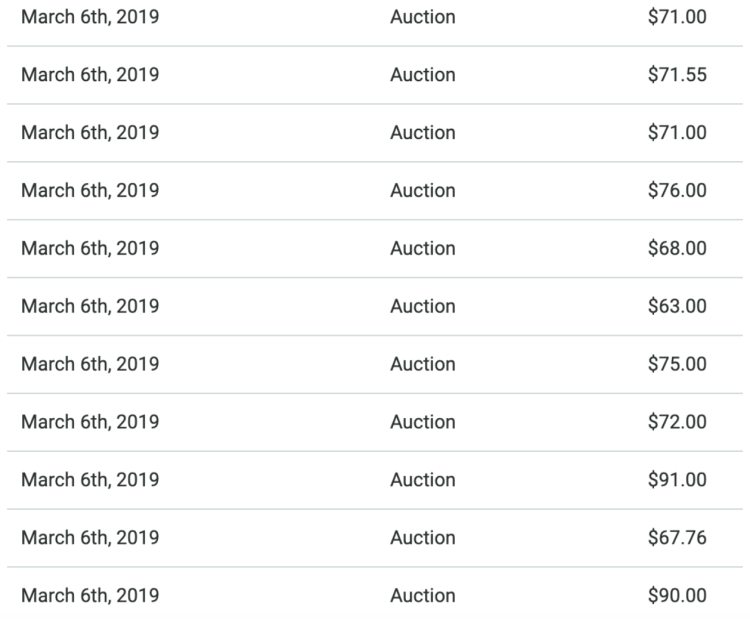 Here’s a graph of how the value’s been moving since October 2019: 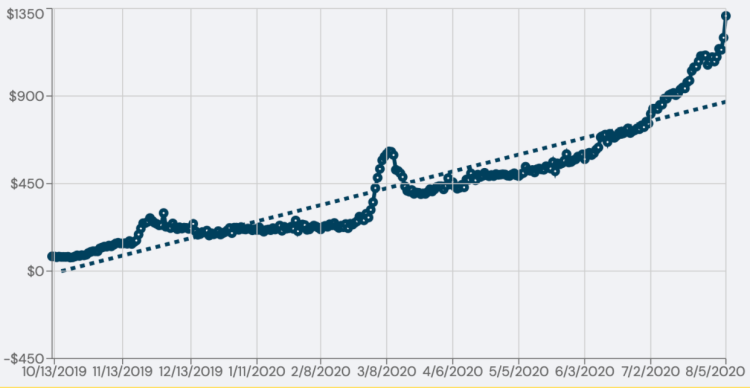 Luka’s proven himself to be a potential all-time player since the start of his sophomore year and an MVP contender. And if he ends up winning the MVP title, who knows where this card could go.

If he ends up winning the NBA title or MVP, there could be a lot more potential here - not to mention that Giannis is a charismatic and good guy off the court. He’s a front-runner to be the next face of the NBA, which could, of course, push his card values up even more.

Lebron’s Topps Chrome rookie refractor was another significant spike—starting at around $5400 in March 2019 and selling for $46,500 in June 2020. While this card carried a higher price point from the original date we’re looking at; the returns are still insane.

The refractor is a variation of the 2003 Lebron James Topps Chrome rookie card, which is currently selling for $14,500+ as of August 2020. If you check the population reports on PSA’s website, you’ll see that the refractor is in far lower supply, which is an indicator of why the price is so much higher.

Kobe is an all-time great basketball player who was admired by just about everybody who watched or played the sport. His legacy will only continue to grow over time, and he’s a legend in LA (the entertainment capital of the world), which could make this card an attractive long term investment. As demand continues to grow for sports cards, many entrants will look to Kobe as their first purchase. The base Topps card (non-chrome) is also something to keep an eye on.

Jayson Tatum’s 2017 rookie card went from around $20—$30 in March 2019 to $787 in August 2020. Jayson continues to show growth year over year and has become the centerpiece of the Boston Celtics franchise. If Tatum is able to lead the Celtics to a title, who knows where this could go.

Trae’s an example of a player who’s widely anticipated to be a future star in the NBA and someone whose popularity has grown over time. As the three-point shot becomes more of the focus in today’s NBA, Trae is primed to be the face of the league for a long time. It’s yet to be seen whether he’s able to turn the Hawks franchise around and how winning will factor into the sales of his card.

This is an interesting one since it shows the evolution of how the “most desired” rookie card can change over time. Much like Jordan, Kobe, etc., Shaq is an icon of the game and a player even the most casual of fans refer to on a first-name basis. His off the court business savvy & awareness has and will lead to lifelong notoriety. There’s an argument to be made in this case that the Shaq beam team is becoming “the” rookie card for Shaq, which could create a lot more demand for this card over time.

The 2012 year was the first year Panini had the NBA license, and subsequently, the first year that Prizm was released as a product. Since 2012, Prizm has become the center of basketball card culture and the most widely sought after product. Because this was the first year of the product, it was printed much less than the years following - the entire 2012 set has seen a massive increase in demand. When a player’s rookie card goes up in value (like LeBron’s Topps Chrome card) to the point where people can’t afford it anymore, demand for other cards of that player goes up. People start collecting second-year cards, or first-year cards with a specific team.

Kawhi’s growth as a player has been incredible to watch—he’s regarded by many as one of the best players in the NBA right now, with a high likelihood of adding another title soon. 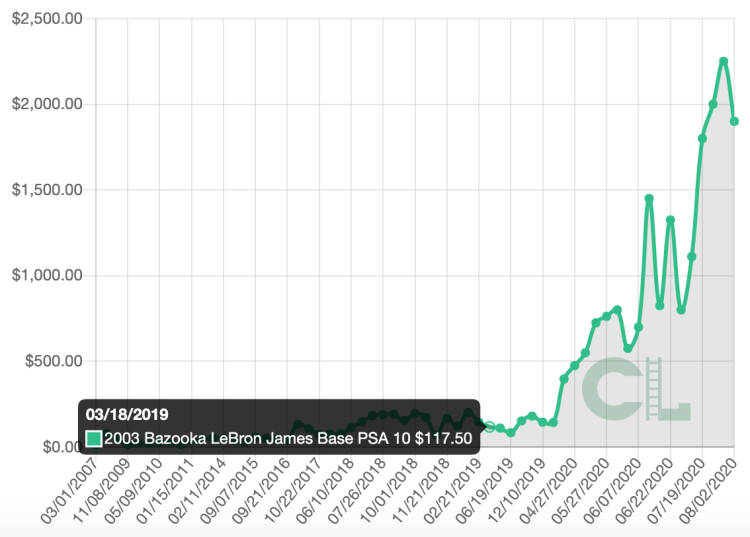 As mentioned before, when a player’s rookie card gets out of reach, other cards start to move up in price. One reason for the price increase might have been the unique “comic book” design which makes it different from other cards. Two icons on one card, what more is there to say.

This card is a little different from the design compared to other cards—given the iconic Jordan pose, it could appeal to those who are new and just getting into the hobby. It’s worth paying attention to. Also, there’s something to be said about the feel of large slabs! 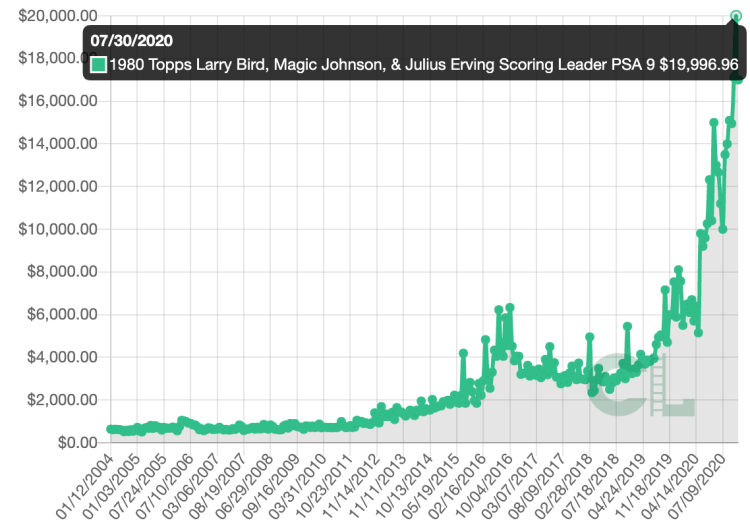 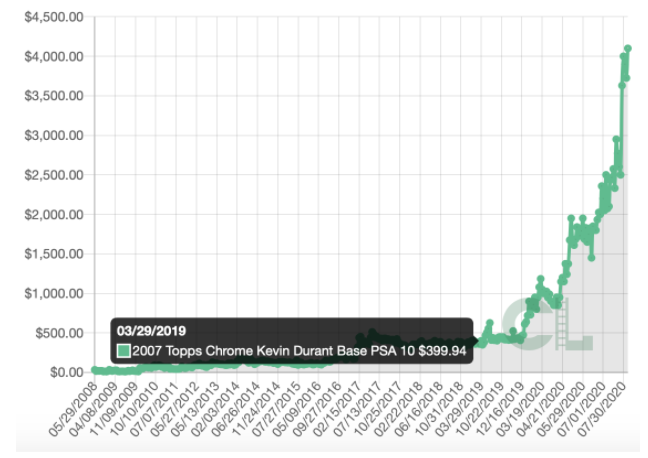 Kevin Durant’s Topps Chrome rookie card went up over 10x—from $399 in March 2019 to over $4.5k in August 2020. Arguably a top-five scorer of all-time with some uncertainty ahead due to his return from injury, but if he never played again he is a 2x NBA Champion & Finals MVP.

This card started out at $660 in March 2019 and sold for $3570 in July 2020. One of the most iconic players in league history combined with incredibly low population & those that remember him in his prime being of older age and more disposable income could see this continue to rise in value.

Hakeem’s rookie card went from $510 in March 2019 to nearly $850 in August 2020. The 86 NBA Fleer set is about as iconic as they come & with such low population compared to modern-day cards, some say there is no slowing down on these anytime soon. 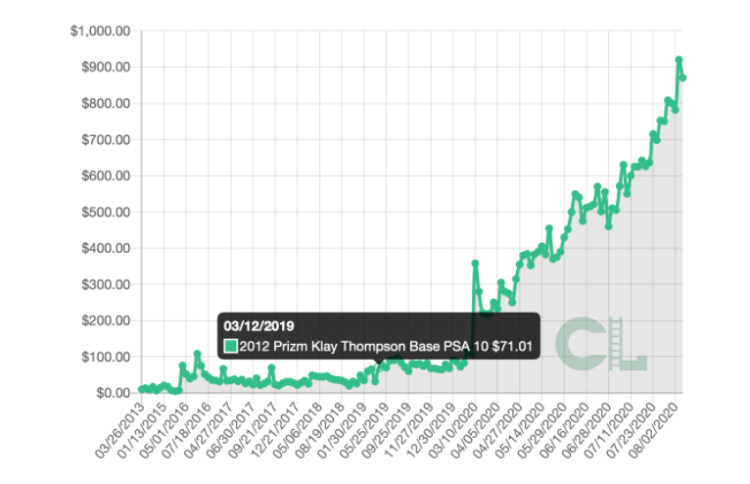 Klay Thompson’s rookie card went from $71 in March 2019 to $920 in August 2020. Similar to the stated above, all things 2012 Prizm continues to go crazy! Klay holds the record for points in a quarter and has been part of one of the most lethal backcourts in history.

Anthony Davis’s rookie card went from around $80 to $3500 in the past 17 months. His move to the Lakers & playing alongside Lebron has brought awareness he didn’t have the first few years of his professional career. One could argue we’ve never seen a player like Anthony Davis in this league before

Image Provided by Team Gary Vee
Slide 1 of 3
Did you like this article?