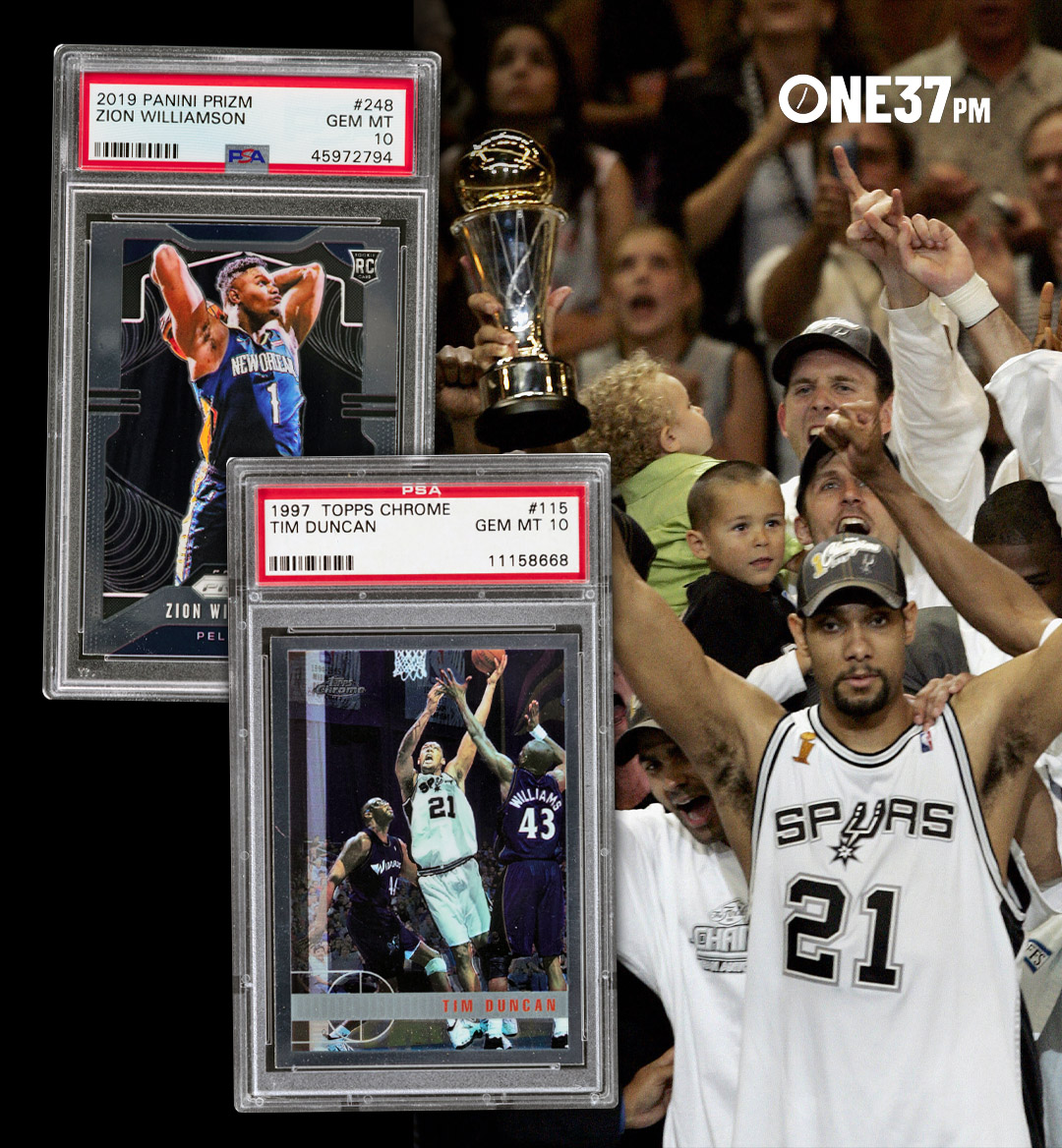 In the latest installment of our 'Data Debates' series, in which we aim to help newcomers understand the process of evaluating supply and demand and identify which cards are overvalued vs undervalued, I put the rookie cards of the legend, Tim Duncan, against those of the young emerging phenom, Zion Williamson.

The Case For Tim Duncan 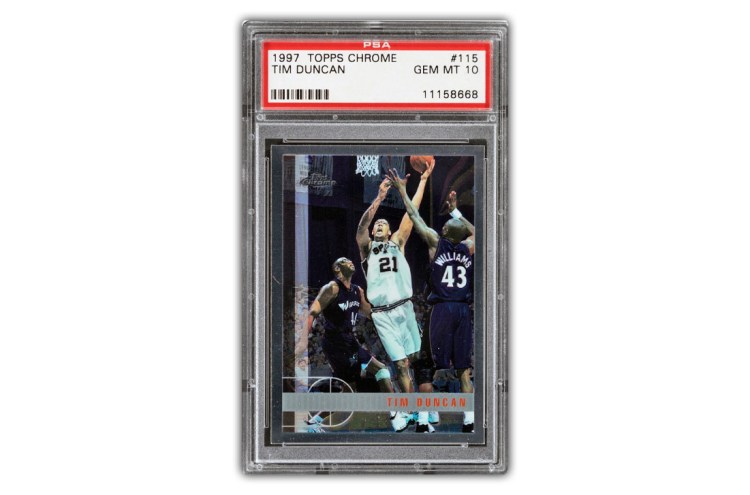 Tim Duncan played 19 seasons for the San Antonio Spurs and was one of the famed “Twin Towers,” alongside teammate and fellow Hall of Famer, David Robinson. He is considered by most to be the best power forward in the history of the NBA and a top 20 player of all-time.

His accomplishments in basketball are eye-popping:

Nicknamed “The Big Fundamental,” his unique skill set for a big man was as understated as it was flawless. After winning their third NBA Championship together in 2005, Coach Greg Popovich said, “Duncan’s complete game is so sound, so fundamental, so unnoticed at times, because if he didn't score, people think, 'Well, he didn't do anything.' But he was incredible, and he was the force that got it done for us."

Duncan is one of only four players in NBA history to win three NBA Finals MVP’s, along with Michael Jordan, Shaquille O’Neal, and Magic Johnson. He is a member of the iconic NBA Hall of Fame Class of 2020 and will be inducted this May (after being rescheduled because of the pandemic) alongside two legends, Kevin Garnett and Kobe Bryant.

The Case For Zion Williamson: 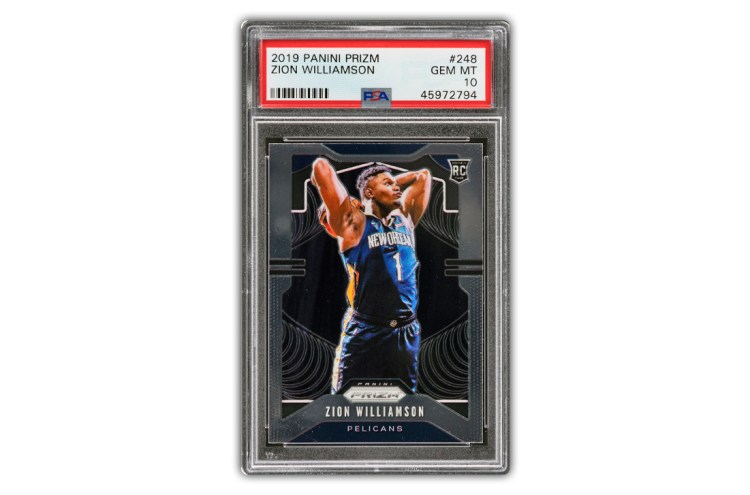 Zion Williamson was the first overall pick in the 2019 NBA Draft after playing only one year at Duke University. However, since his days at Spartanburg Day School, he has been in the public eye, where highlights of his dunks seemed to pop up daily on ESPN and throughout all social media platforms. While in high school, Williamson won three straight South Carolina state championships and was named South Carolina Mr. Basketball after his senior year.

Williamson’s rookie year in the NBA was cut short after he tore a meniscus in the preseason, which held him out for the first three months of the season. He wound up playing in only 24 games, averaging 22.5 points and 6.3 rebounds per game.

Off the court, Williamson signed a five-year, $75 million sneaker deal with Jordan brand, which is the second-largest ever of its kind, next to LeBron James's $90 million rookie sneaker deal he signed back in 2003. 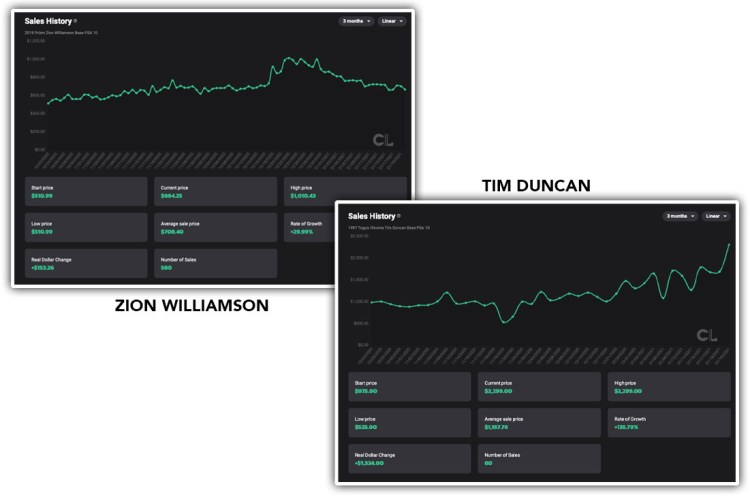 Who is the Better Investment? 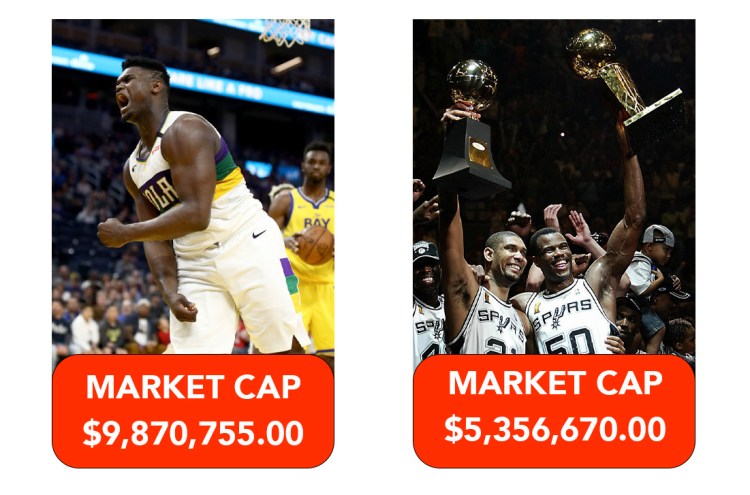 You might be asking yourself exactly what I am doing here. Obviously, there is no comparing the two players in terms of on-court accomplishments. Duncan is arguably a top 10 all-time player. Zion has only played in parts of two seasons. It’s almost disrespectful to Duncan’s legacy to compare the two... Right?

Now, let’s go back and look at the numbers of just how many Zion Williamson base rookie Prizms there are in PSA’s population report. With 14,860 of them out there, a number that is sure to rise to around 20-25,000 once PSA gets through their backlog, and who knows how many left inside of packs that have yet to be opened, I would like to reverse that previous question with a question of my own:

“What exactly is the hobby doing here?!”

Zion’s market cap on his PSA 10 ($9.87 million) is already almost double Tim Duncan’s ($5.35 million), and I can’t figure out why. Is there anybody who believes that by the end of Zion’s career, he will have come close to matching Duncan's accomplishments? Two MVPs? Three NBA Finals MVPs? Five Championships? He would have to, in order to justify the numbers people are currently paying for his cards.

With that said, is Tim Duncan the most underpriced superstar of all-time?

In May of 2020, ESPN did a “Top 74 NBA Players of All Time” list, and they placed Tim Duncan at #8, one spot AHEAD of Kobe Bryant and one spot below Larry Bird.

It’s time we put some respect on Duncan’s name. He is about to be inducted into the Hall of Fame with Kobe. He is ranked one spot ahead of Kobe on ESPN’s all-time list, and yet, the market cap on his PSA 10 rookie cards ($5,35 million) is 25% that of Kobe’s? I can definitely see a big bump coming at Duncan's prices around May, around the time of his induction ceremony.

Was Duncan "boring to watch," as some fans say? Sure. He didn't have the highlight reel dunks like Zion, which obviously matters in the current market. Zion is way more marketable and relevant to the modern-day collector. But that only matters until it doesn't.

As a cautionary tale, let's compare Zion's early popularity to that of Derrick Rose, who was also drafted first overall in 2008, was the 2009 NBA Rookie of the Year, and was the youngest player to ever win an NBA MVP in 2011, at just 22 years old. The sky seemed to be the limit for Rose, but injuries took their toll, and his career never was able to take that next step.

I can't even imagine the prices Derrick Rose's rookie cards would have been selling for in this current market after his MVP season, but a quick glance at the current market cap for his 2008 Topps Chrome PSA is currently at $39,790. That should scare the hell out of Zion investors, especially with his size, body type, and already have dealt with injuries of his own.

If you think that the stars will align and that Zion Williamson will someday be mentioned in the same breath as Kobe, Magic, Larry, Wilt Chamberlain, and Shaq, maybe you can begin to justify his current prices. However, that is a longshot at best. When this Zion bubble likely bursts at some point, many people will be left holding the bag.

Zion vs. Duncan = Gambling vs. Investing... and we all know how that Friday night trip to the casino typically ends. I'm playing this one safe, and my money's on "The Big Fundamental."