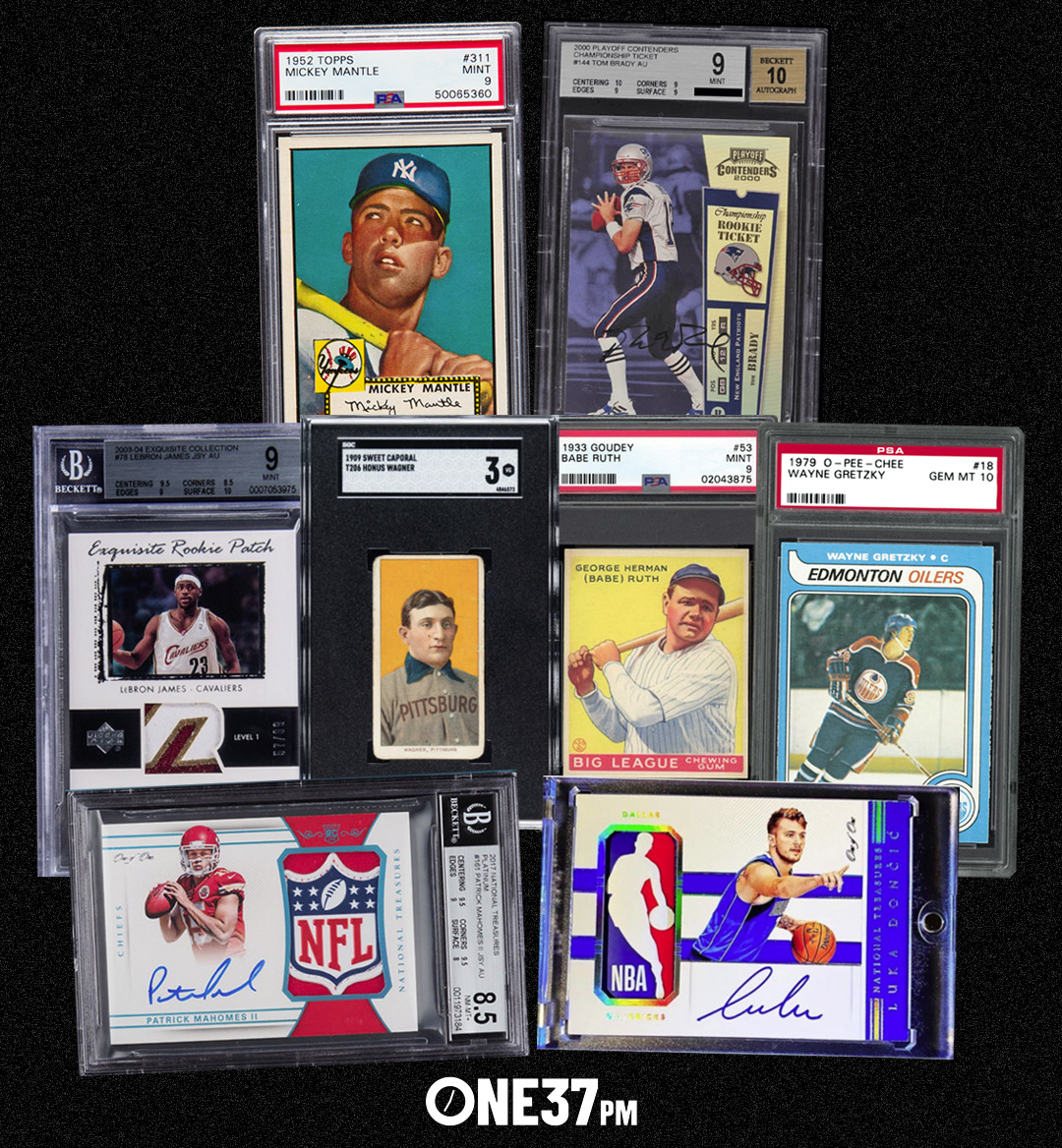 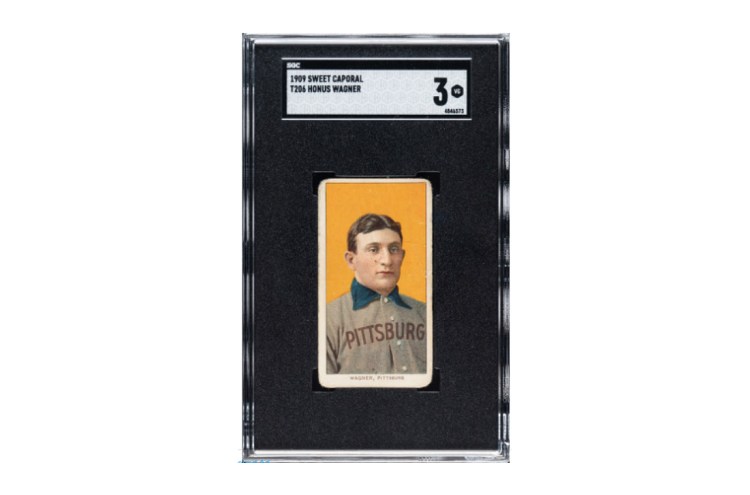 It’s estimated that there are just 57 Honus Wagner T206 cards in existence, a supply cut short given that Wagner did not approve of the American Tobacco company producing any more of his cards. The set originally intended to produce 200 Honus Wagner cards in that year alone. The set continued to run through 1911 with thousands of additional cards but Wagner’s is the most scarce on the planet.

On August 16th, an SGC 3 graded copy of this card sold for $6.6 million, a record for any sports card, all time.

It’s not just the scarcity of this card that draws big demand — it’s Wagner’s history in Major League Baseball. He debuted for the Louisville Colonels in 1897 and finished his career in 1917 for the Pittsburgh Pirates.

He hit .300 or more in 15 consecutive seasons, earned 8 NL batting titles, and finished his career with 3,420 hits and 1,732 RBIs. He was part of the first group of baseball players elected into the Hall of Fame (1936) and played in the first modern World Series. After his career, he coached part-time for the Pittsburgh Pirates until his death in 1955. 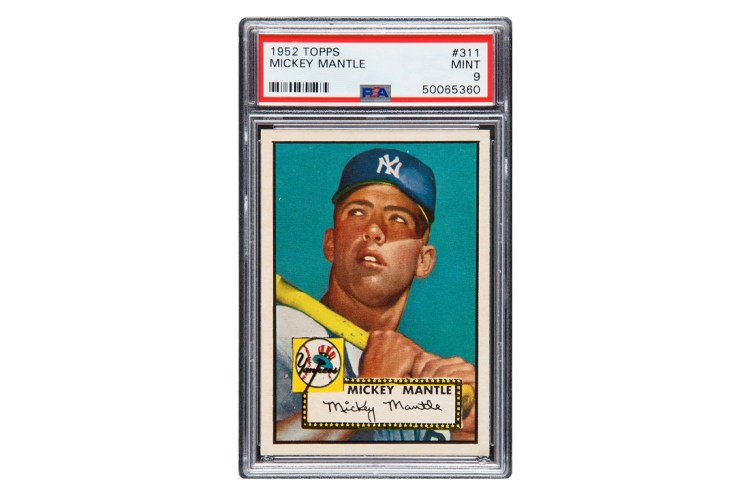 If there were one card to potentially challenge Wagner’s prominence in the hobby, it would be the Topps 1952, Mickey Mantle. Up until the Wagner sale, a PSA 9 copy of this card held the record for the most expensive sports card ever sold when it was purchased by actor Rob Gough for $5.2 million in January.

There are just 6 copies of this card in a PSA 9 grade and only 3 in a PSA 10 grade. A Gem Mint PSA 10 Mickey Mantle is estimated to be worth somewhere between $15 million and $30 million.

Like Wagner, Mantle was a star of the game, winning 7 World Series with the New York Yankee and holds the all-time record for most home runs, RBIs, walks, extra-base hits, total bases, and runs scored in the World Series.

Also, like Wagner, Mantle’s 1952 Topps card supply was cut short after the card’s creators sent thousands of these cards to the trash dump after dismal sales and needing to create more storage space.

Technically, the true Mickey Mantle rookie card was the 1951 Bowman #253, but given the Topps brand, and this being Mantle’s first Topps card, it commands the most value on the market. 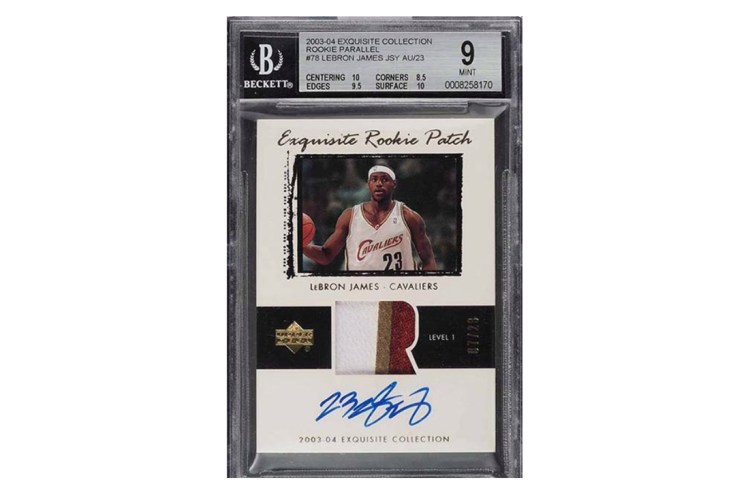 ESPN ranked LeBron James as the 2nd best basketball player of all-time behind Michael Jordan. Fortunately for LeBron he entered the league at a time when card companies were producing Rookie Patch Autograph cards (Jordan did not have such a card).

This parallel is limited to just 23 copies and features a 3-color patch and took back the reigns of the most expensive basketball card ever sold from Luka Doncic.

This card sold in April of this year via a private sale. 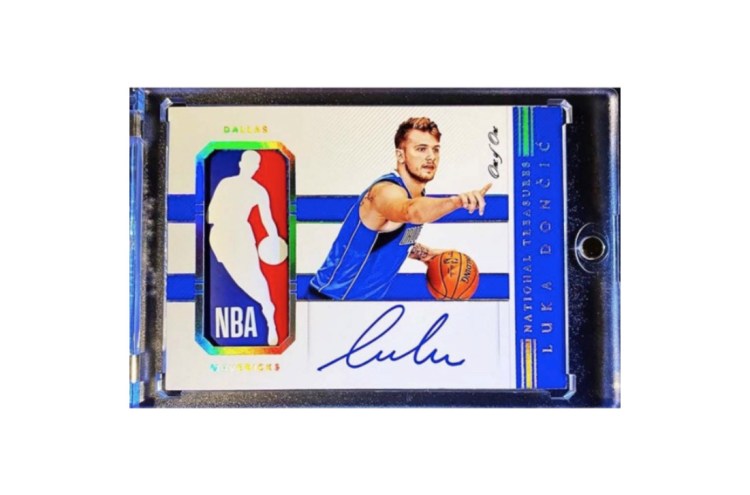 Back in February, this 2018 National Treasures Luka Doncic Rookie Patch Autograph 1/1 Logoman held the record for the most expensive basketball card ever when it sold via a private deal.

Unlike Mantle and Wagner’s cards, this rookie card has built-in scarcity as it was designated a unique one-of-one by Panini. Despite being ungraded, and Luka only played 3 seasons, this card still fetched $4.6 million.

Doncic has averaged 25.7 points per game to go along with 8.3 rebounds and 7.8 assists per game so far in his career. He’s drawn comparisons to LeBron James and Michael Jordan, but is only in his fourth season and has yet to win an NBA championship or MVP award.

This Patrick Mahomes BGS 8.5 National Treasures 1/1 Shield Patch Auto holds the record for the most expensive football card ever sold. In July, PWCC privately brokered a deal for the sale of this card to LJ’s card shop for $4.3 million dollars.

Patrick Mahomes is currently in his 5th NFL season and has already won an NFL MVP award and a Super Bowl. Mahomes is off to an extremely hot start to his career and has been dubbed the NFL's most exciting player.

Like Doncic’s record card, there is built-in scarcity for this true one-of-a-kind Mahomes rookie card. However, as Tom Brady still plays at a high level even at age 44, Mahomes has big shoes to fill to live up to this record price. 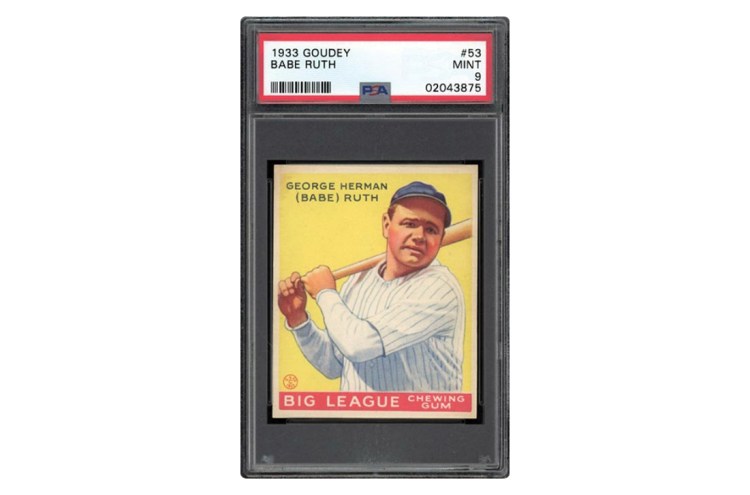 The 1933 Goudey set featured four Babe Ruth cards in total, but the yellow background is acknowledged as the toughest grade of the four with just 1 PSA 9 in existence.

This card sold for $4.2 million over the summer, a record for any Babe Ruth card, and came out of the collection from a Florida Doctor who passed away this past January.

Ruth is considered to be one of the greatest hitters to ever play the game of baseball, but he started his career as a pitcher and went on to win 89 games between 1915 and 1919 putting up an ERA of just 2.16. Ruth was a 4x World Series Champion. 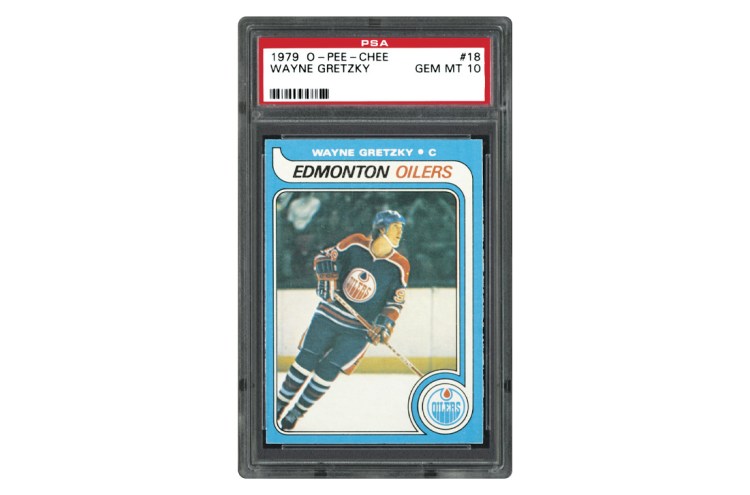 There are just 2 copies of Gretzky’s 1979 O-Pee-Chee rookie card in a PSA 10 grade and one copy sold for a record $3.75 million in a private sale this past May.

This sale is the record for any card ever sold and finally put hockey cards on the map in the ranks of Basketball and Baseball. Gretzky is considered one of the greatest hockey players and athletes of all time and still holds numerous unbeatable records. Over the course of his career, Gretzky won 4 Stanley Cups. 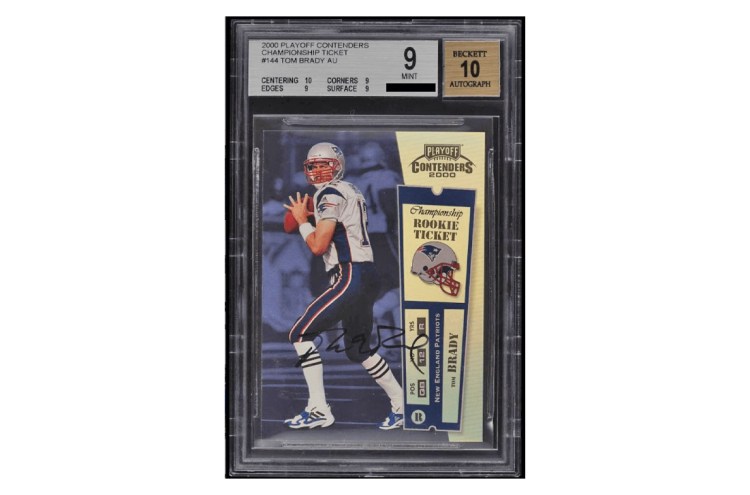 There are 7 copies of the 2000 Playoff Contenders Tom Brady Championship Ticket Autograph cards in a BGS 9 grade. One for each Super Bowl that Brady has won. The former sixth-round pick has effectively had three Hall of Fame careers wrapped into one.

Brady is in his 22nd NFL season and is currently the MVP favorite at 44 years old. He’s played in 10 Super Bowls, winning 7 and the Buccaneers are currently favored to win it again this year. His current performance further solidifies that he was not a product of New England Patriot head coach Bill Belichick’s system and that he seems to defy his age. 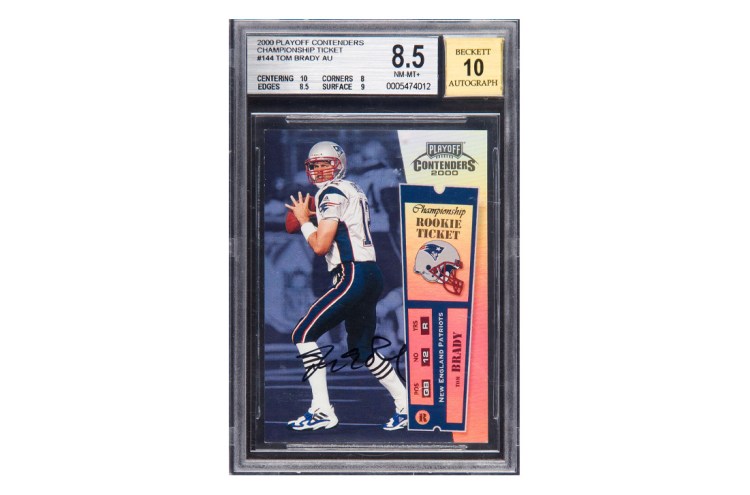 Tom Brady holds two spots on the top ten most expensive sports cards sold in 2021. This BGS 8.5 copy of his championship autograph ticket /100 sold for $2.25 million via Leland Auctions this past April, a record for any football card sale at the time.

This card could have been purchased in 2014 for just $3,062 after Brady had already won 3 Super Bowls. 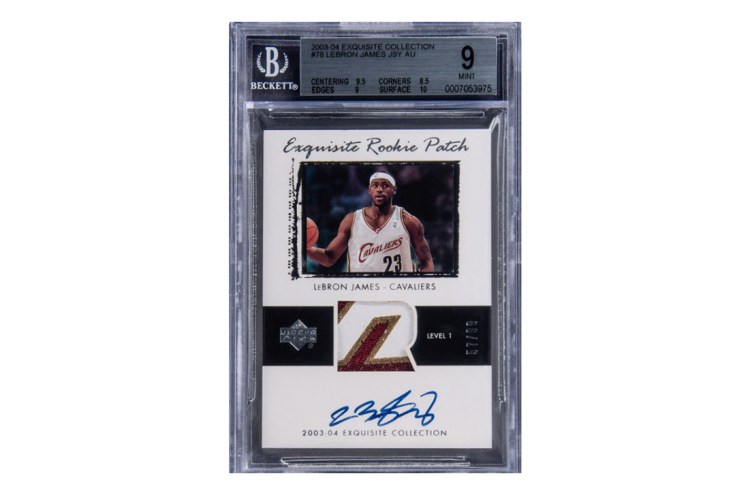 Goldin Auctions sold this BGS 9 copy of LeBron James’ exquisite rookie patch autograph card (numbered to 99 copies) for $2 million dollars, a record sale for the non-parallel of this card.

There are 41 copies of this card in a BGS 9 grade (with a 10 autograph) and another copy sold earlier in the year (April) for $1.72 million.