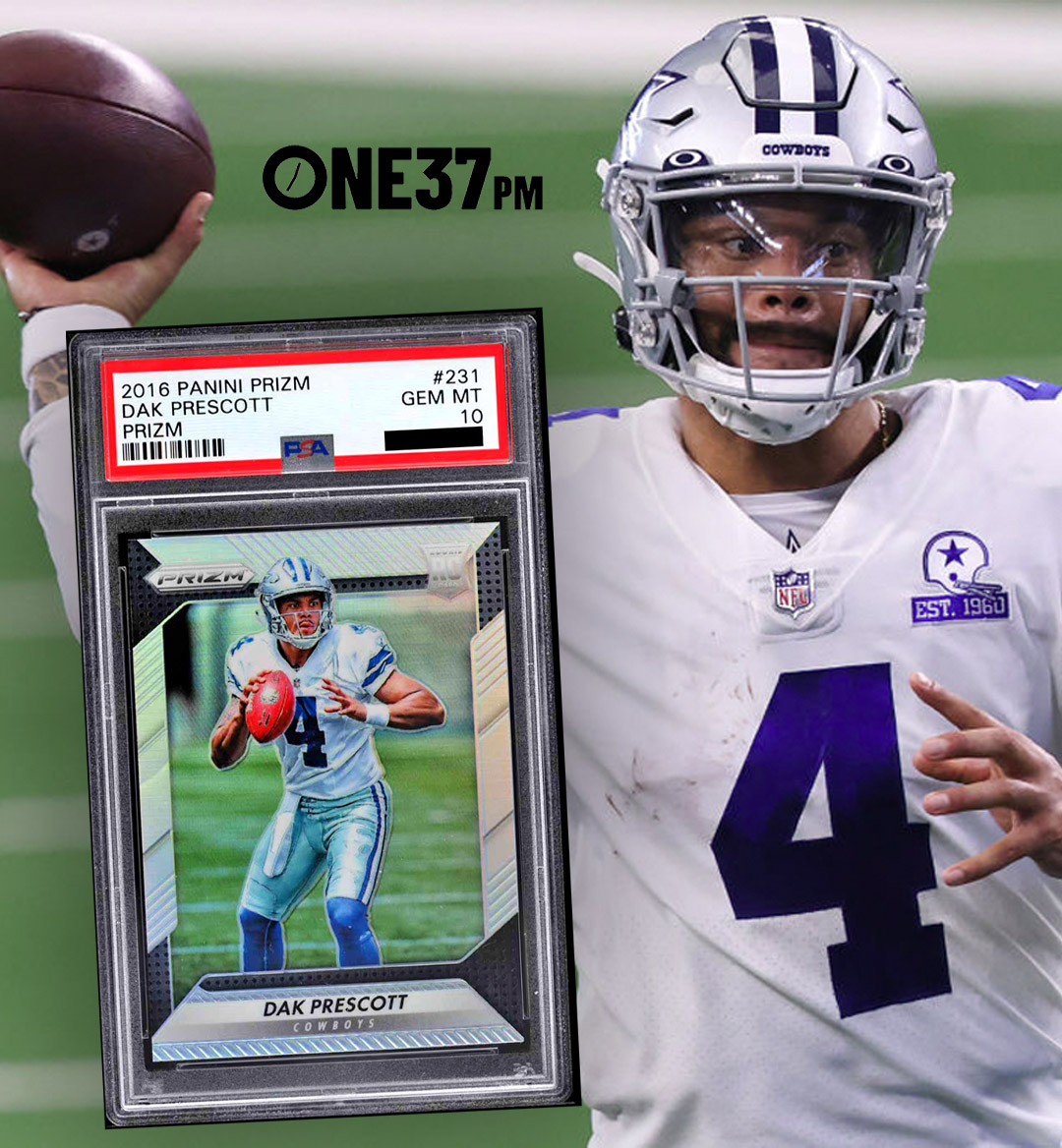 NFL free agency is a great way to plug holes in a team's roster and reinvigorate a fanbase. Seconds after ESPN reporter, Adam Schefter announces any trade, fans of all 32 teams can be seen on Twitter saying things like: “My team signed (insert name here)?! He was so underrated on his old team. Our coaching staff will turn him in to a Pro Bowler!“ Or on the flip-side, “Not a big loss. The (insert team's name) WAY overpaid for him. He wasn't even that good!“

As we have learned, relevancy is probably the number one factor when flipping cards. When a player is acquired via free agency or a trade, they immediately become a relevant talking point through local and national media.

As an example, earlier this offseason we saw that scenario play out in the Matthew Stafford card market almost immediately after he was traded from Detroit to Los Angeles. On January 23rd, his 2009 Topps Chrome PSA 10 was selling for around $300. He was traded on January 31st, and within two weeks, the same card was moving at around $1250.

The energy that sends fans to Twitter, excited to welcome their "free agent steal" (or so they are convinced), will also send folks to eBay to purchase their rookie cards. After all, if fans are convinced that the player was under-utilized and under-appreciated in his former city, investing in that card makes all the sense in the world, right?

Here is a list of my top 10 players that were available during this free agency period and why their cards might be a good buy: 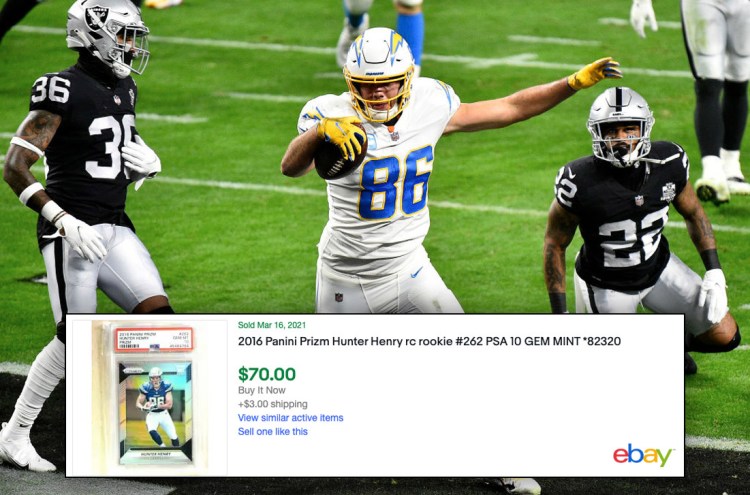 Hunter Henry is very much in play as the #1 tight end in a Bill Belichick offense. The Pats also signed tight end Johnnu Smith, as they historically like to run two tight end sets. Both are certain to see a lot of balls thrown their way, but I see Henry as the one with higher upside and I wouldn't be shocked to see him end up in the Pro Bowl this year.

There are two reasons why he isn't higher on this list:

There aren't too many graded Hunter Henry rookie cards, but you can scoop up some of his—even numbered rookie autos—for well under $100. 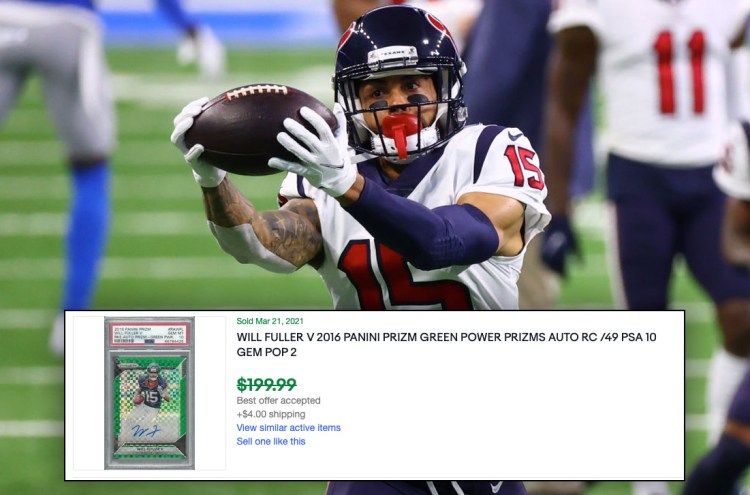 Will Fuller is a former first round draft pick (2016) who played in a high-powered offense (featuring Deshaun Watson) and had some big moments. His biggest problem was his ability to stay on the field, missing a total of 27 games in his first five seasons and never once playing in more than 11 games in any season outside of his rookie campaign.

That said, last year, Fuller had 53 catches for 879 yards and 8 touchdowns. He appeared to be on the verge of a HUGE season before being suspended for six games for violating the leagues policy on PED's—a suspension that will carry over through week one of the 2021 season.

He signed a one-year deal in Miami, where Tua Tagovailoa is currently slotted to start the season as their number one quarterback. I don't love Tua, and that could certainly be an issue, but on a one-year deal and with plenty to prove, Fuller has me intrigued. He is obviously going to be motivated to prove that he can be a number one guy and earn a big pay-day next offseason. His current low numbered rookie card auto prices are VERY cheap. I love low risk plays like this, but don't go too crazy. 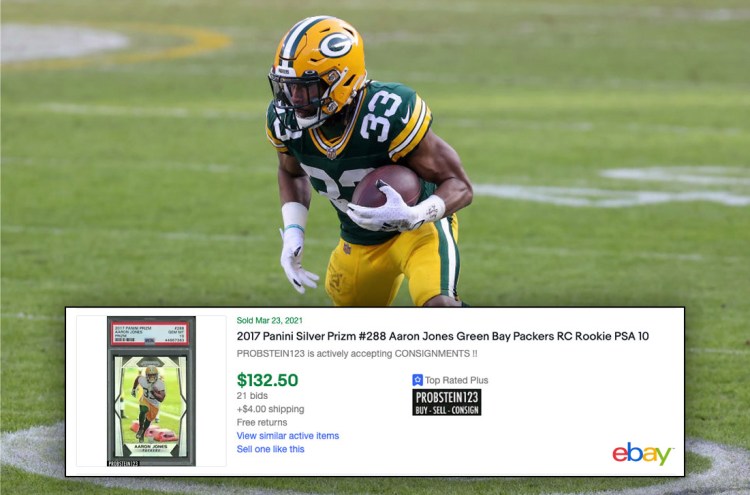 Re-signed with Packers for 4 years, $48 million

I just want to start off by saying that I am very surprised that Aaron Jones wound up back in Green Bay after they spent a second round pick last season on AJ Dillon.

Bringing Jones back on a four year deal does two things: 1) It solidifies him as the number one running back in a high powered offense and 2) it simultaneously crushes the hopes of anyone who was sitting around collecting AJ Dillon cards.

With all of that said, Aaron Jones is a very good player who made his first Pro Bowl in 2020. He was tied for first in the NFL in rushing TD's in 2019, and has run for a combined 2188 yards over the past two seasons.

Green Bay could very well make another deep run this year, possibly all the way to the Super Bowl, and you can still find rookie autos like this Prizm Cracked Ice /75 for $89. His PSA 10 2017 Prizm rookies currently sell for about $135. 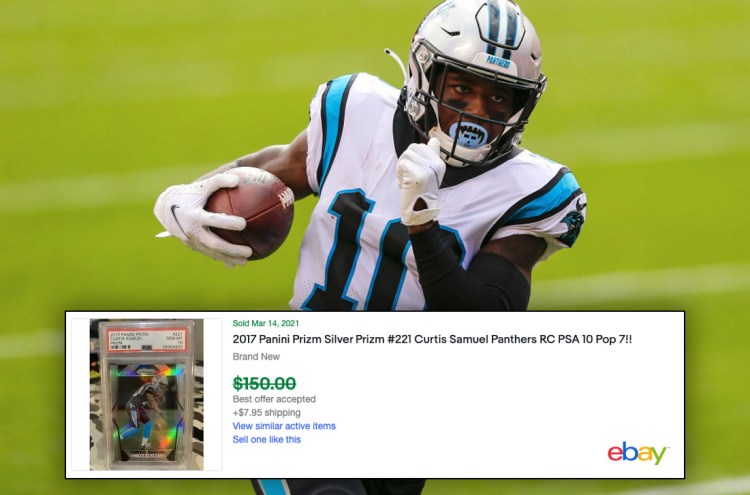 Signed with Washington for 3 years, $34.5 million

Curtis Samuel is a very good, extremely versatile player, who will have plenty of opportunities in Washington after signing a three-year deal. The Ohio State alumni will be paired up with fellow Buckeye alum Terry McLaurin in a "scary" 1-2 combination.

Will the quarterback be newly signed journeyman Ryan Fitzpatrick? Or will Taylor Heinicke prove that his fantastic surprise playoff start last season was no fluke? Whichever direction Washington goes with the quarterback, they will certainly have some nice weapons down field.

To show how my "relevancy is the number one factor" theory works, I found this Curtis Samuel National Treasures rookie patch auto /99 in a $5 bin at the Dallas Card Show. I listed it on eBay for $50 or best offer the night that he signed with Washington. It sold within days for $35. Not my biggest play, but I will take those returns all day. You would be surprised if you saw the Samuel rookie autos that are available for under $25. Again, low-risk plays are some of my favorites. Don't expect to make a fortune, but there is plenty of room to double, or even triple, your money at those prices if he has a big year. 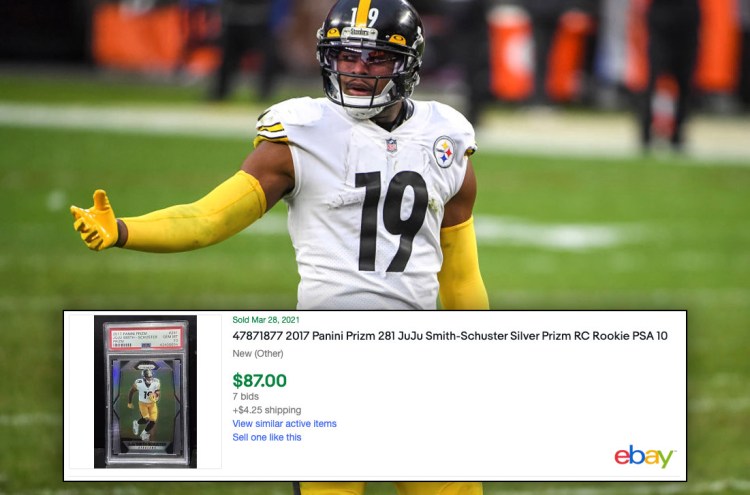 If Juju scores a touchdown, you are going to hear about it. In the relevancy market, Juju is almost always relevant. With that said, his Prizm rookie auto recently sold for just $68 and much like Will Fuller, Juju is on a one-year deal in an effort to cash in next offseason if he puts up big numbers.

I like investing in low risk buys of players that I know will be motivated, especially ones who command a ton of media attention. Juju checks all the boxes. 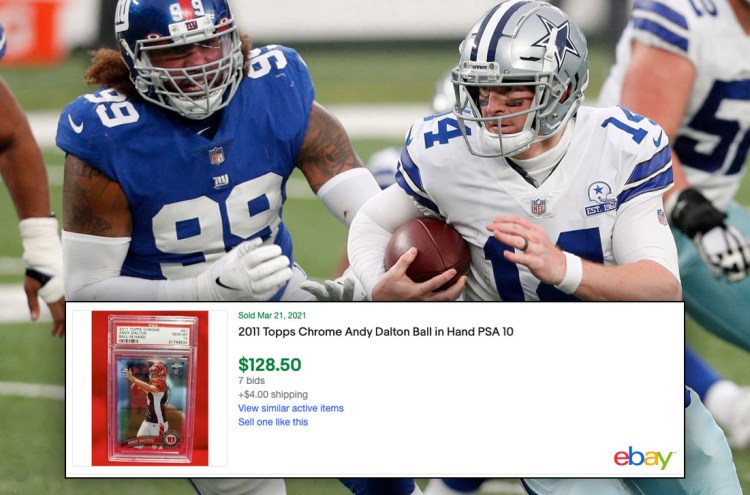 I am not in any way a believer in Andy Dalton, the quarterback. He was objectively awful in Dallas this past season after Dak Prescott went down, so there is really only one reason to have him so high on this list.

Starting quarterbacks are always relevant and in-play. The Bears have a fantastic defense and one of the most underrated wide receivers in the NFL (Allen Robinson) back on a franchise tag. The Bears went 8-8 this year with Mitch Trubisky and Nick Foles, so if Andy Dalton can just be a little bit better than that, it's not crazy to think the Bears could go 10-6 and sneak in to the playoffs.

You can find his Topps Chrome rookie autos for under $50. I promise that if he can somehow take this team to the playoffs, the entire city of Chicago will love him and the prices of his rookie cards will have a nice run. I will definitely enter this season owning a few as yet another low-risk play that could accrue big dividends. 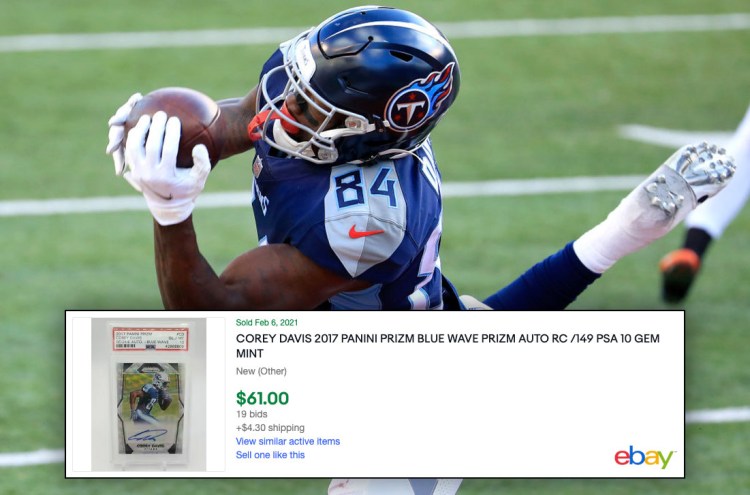 (Full disclosure: I am a die-hard Jets fan.)

Corey Davis was the fifth pick in the 2017 NFL Draft and never quite lived up to the hype. However, with 945 yards and five touchdowns in 2020, he had his most productive season and seems to be coming in to his own.

Davis enters the bright lights of the New York City media market, and is positioned to get the lion's share of the receptions with just Jamison Crowder, Denzel Mims and newly signed Keelan Cole filling out the rest of the wide receiver room.

The Jets franchise is starved for a 1,000 yard receiver (something that hasn't happened since 2015) and will likely be selecting quarterback Zach Wilson with the number two pick. If he truly is the franchise quarterback that they say he is, he will need a number one receiver. Davis would seem to be that guy.

The reason I have him so high on this list is because you can get a Corey Davis 2017 Silver Prizm rookie auto for under $20. I absolutely love the low cost of entry on a guy who could absolutely become a star in New York. 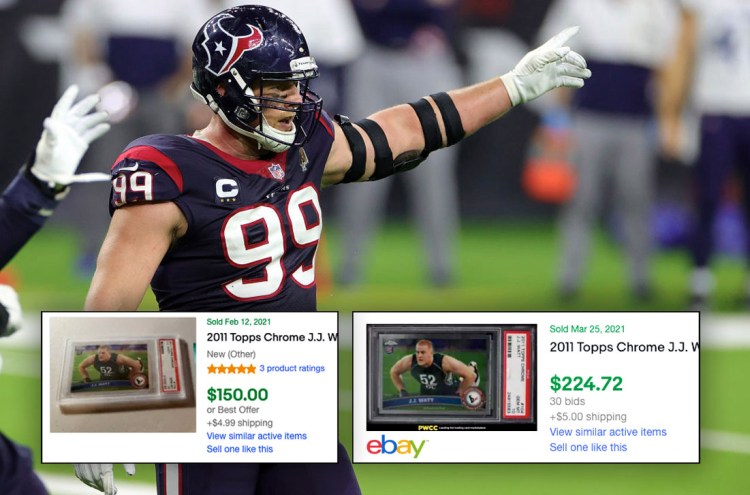 J.J. Watt is already a legend who is playing out the stretch run of his storied career in Arizona where he will be reunited with DeAndre Hopkins in the "get me the hell out of Houston" tour.

The Cards have a ton of weapons and could be a sleeper team to this year after underachieving in 2020. If J.J. Watt gets to the playoffs, the stories of his greatness will be all over the media— much like Tom Brady this past season.

Historically, defensive players don't typically sell that well. But J.J. Watt is not your typical player. The fact that his Topps Chrome rookie cards are selling raw for around $20 is wild to me. Buying clean copies and grading them could turn out to be a fantastic play if the Cardinals and Watt make some noise. Watt's cards have already seen a nice relevancy run with his prices up about 50% since signing his new deal in the desert (as illustrated in the photo above). 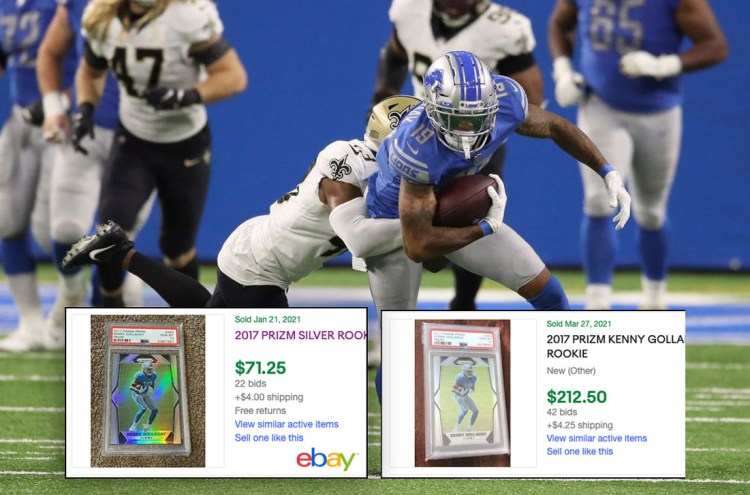 We might be a little late on this player. You could have gotten his PSA 10 Prizm rookies back in January for just $71, but they are currently selling for just over $200—a 3x relevancy return in just two months.

Golladay is a very talented receiver, who (like Matthew Stafford) managed to get out of the Detroit abyss this offseason. He landed in a fantastic spot with the Giants where he will be the top receiving weapon for Daniel Jones on an offense that also features a returning Saquon Barkley and the emerging Sterling Shepard.

Golladay was a 1,000 yard receiver in 2018 and 2019, with 16 TD's in those two campaigns. I would not be surprised if he topped 1200 yards this year. The cost of entry is a bit higher than some of the other guys on this list, but there is still plenty of upside, especially if you are patient and find a great buy like this one. 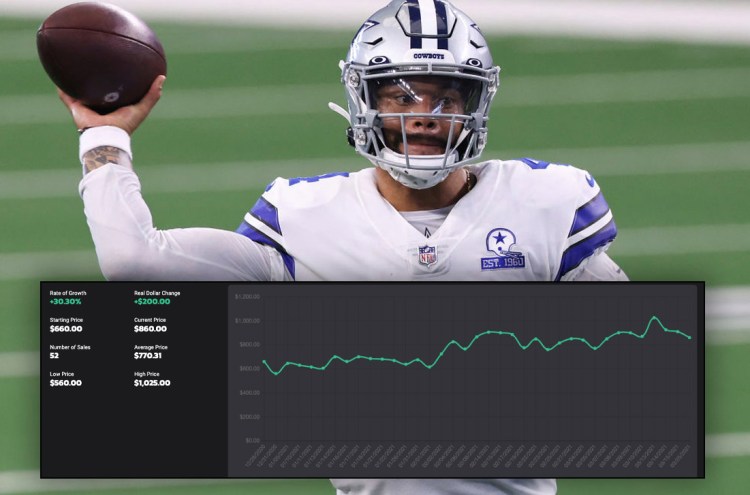 It finally happened. The Cowboys finally committed to Dak Prescott and gave him the long term contract he has been asking for... but now what? Can he live up to the contract?

Dak is positioned better than any quarterback in football outside of Patrick Mahomes, with a supporting cast that is out of this world. He has a top-notch offensive line, Zeke Elliot, Amari Cooper, Ceedee Lamb and Michael Gallup. That offense should be absolutely elite.

His 2016 Prizm rookie PSA 10 has seen a nice run since the end of the season, where it was selling for just $560 on 12/31 and is currently going for around $860. There is still plenty of room for it to go up, especially since he plays for the most valuable franchise in professional sports, with a rabid fanbase. Watch what happens to his prices if he takes the Cowboys to the playoffs.

For comparison, the other quarterback in Texas—Deshaun Watson—has a market cap on his 2017 Prizm rookie PSA 10 that is more than twice what Dak's is, according to CardLadder.

I expect the Cowboys to make the playoffs this year, and fully expect Dak's cards to run up accordingly.