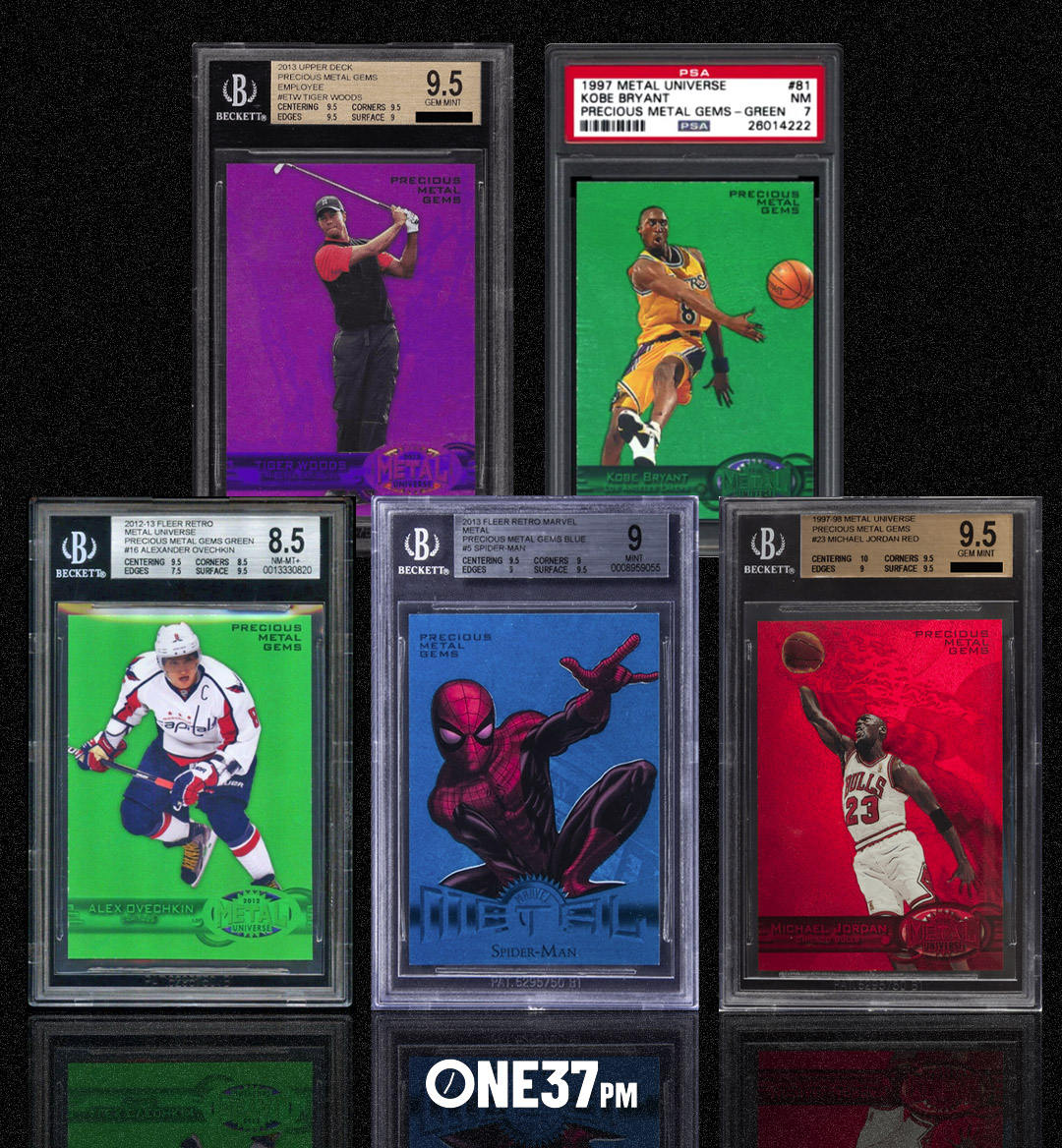 Precious Metal Gems, “PMGs” for short, was released in 1997 as part of the larger Skybox Metal Universe basketball and football card sets. Since then, PMGs from the 1997–98 basketball set have become some of the most iconic and collectible inserts in the hobby.

PMGs are significant because they represent the earliest implementation of what saved the hobby from the junk wax era and helped create the engine for the modern collecting economy we enjoy today: artificial scarcity.

Throughout hobby history, we’ve seen vintage cards sell for record prices largely due to natural scarcity instead of artificial scarcity.

Famous cards that have sold for millions of dollars like the Honus Wagner T206, Mickey Mantle 1952 Topps, and Babe Ruth 1933 Goudey benefitted from natural scarcity. Fewer cards were produced, and even fewer survived in good condition over the years.

However, as the hobby grew, collectors got smarter about preserving the condition of their cards, and companies like Ultra Pro released protective sleeves in the mid-nineties.

In the late 1980s and early 1990s, the hobby almost died out because card companies produced millions of cards. This caused hobby shops to go out of business, and sports card companies to nearly go bankrupt.

Card companies had to do something to create scarcity to increase collectibility, so they started adding serial numbers to cards that limited their supply in the marketplace.

In 1990, the first serial numbered sports card was released. It was a holographic card numbered to 10,000 (meaning only 10,000 copies were printed), featuring the Vince Lombardi Super Bowl trophy: 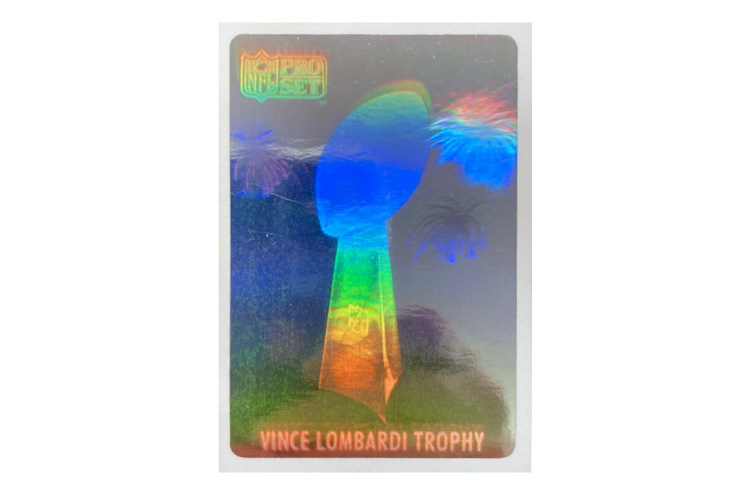 The cards still actively sell on eBay for around $150 for a non-graded card and $300 for a PSA 7, which goes to show that artificial scarcity created by sports card companies can make cards more valuable.

Despite numbered cards preceding its release, Precious Metal Gems had quite a few advantages that helped make their mark in hobby history:

1. The Design Aesthetic and Cultural Relevance 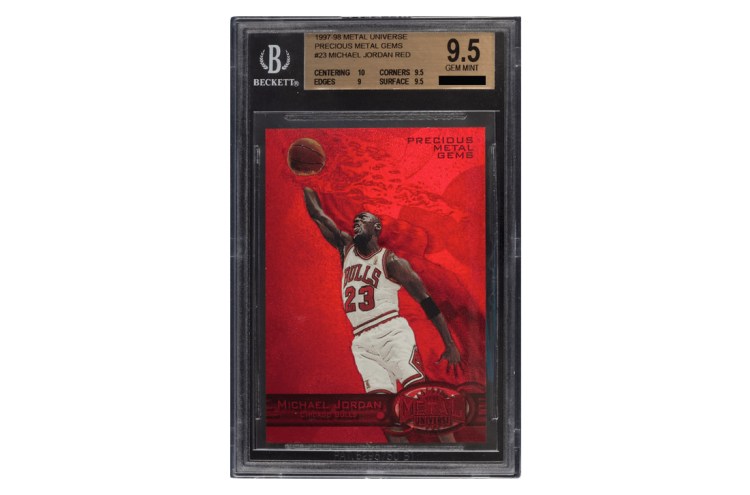 The Vince Lombardi trophy doesn’t have a lot of eye appeal and doesn’t depict an athlete on the card. On the other hand, the inaugural PMG set featured all-time greats like Michael Jordan, Patrick Ewing, Kobe Bryant, Shaquille O’Neill, Tim Duncan, and more with attractive green and red-colored cards.

The set also happened to release during the 1997–98 season, a pivotal one for NBA basketball.

It was Jordan’s final season with the Bulls when they went on to defeat the Utah Jazz in the NBA Championship. Marking the end of one era, but the start of another with young superstars like Kobe Bryant entering the fold.

Anybody holding a PMG from 1997 is immediately sucked in with nostalgia to one of the greatest eras in basketball. 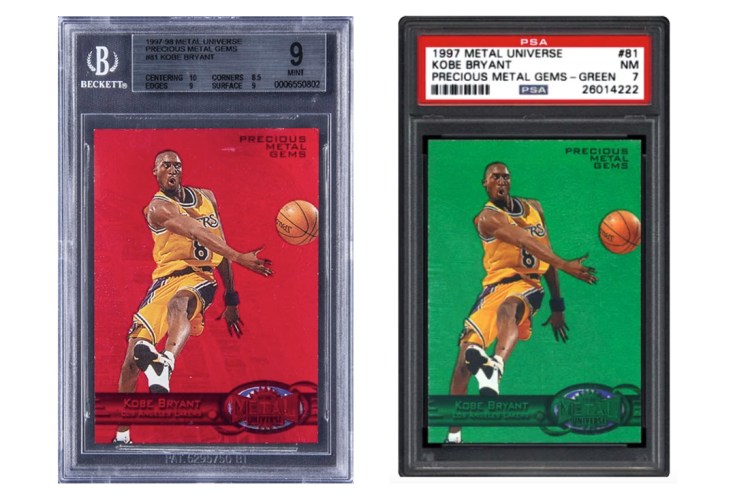 There were only 100 copies of PMGs printed for each player, with 10 green copies, and 90 red Copies.

For perspective on how rare these cards are, the odds of pulling a Michael Jordan PMG insert from a pack was 1 in 17,500.

These were the only parallels in the set, unlike modern releases.

For example, the 2018 Prizm basketball product has 36 parallels. 20 of those parallels are numbered to 99 copies or less. If you want a rare parallel from the set, you have plenty of choices.

3. The Set is Condition Sensitive 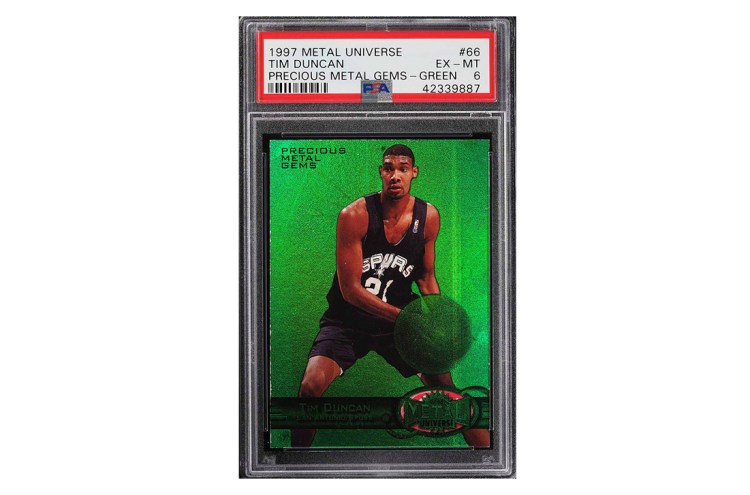 Condition sensitivity can recreate the same type of scarcity vintage cards have. PMGs are hard to keep in pristine condition, which kept the supply of high-grade copies low. Out of 501 total graded copies of basketball PMGs by PSA, only one has received a PSA 10 grade. 310 (62%) of all the cards graded received a PSA 6 or lower.

4. The PMG Revival and Expansion 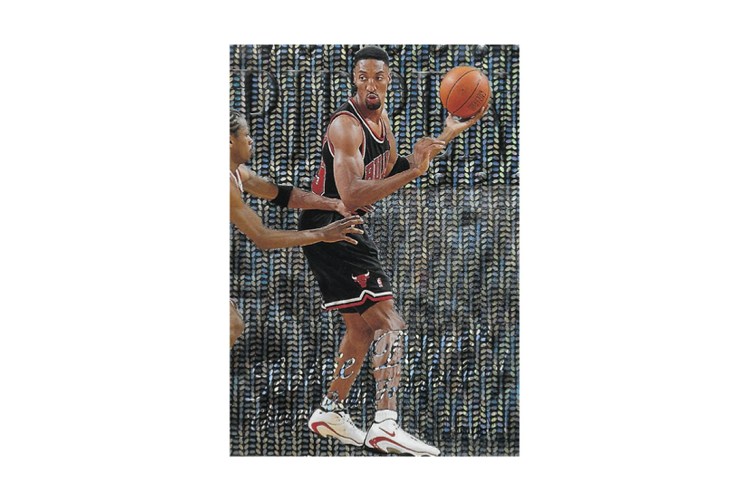 In the ten years following the release of the Metal Universe cards, only one new basketball set was released, 1998–99 Metal Universe.

This time around, the design was altered and the PMGs had a print run of 50 with a one-of-one PMG Masters parallel.

While there was a 1999 Metal Universe baseball and football set produced, the set faded into relative obscurity until Fleer/Skybox went bankrupt and was acquired by Upper Deck. Upper Deck relaunched the product for basketball in 2008–09, but used a different design: 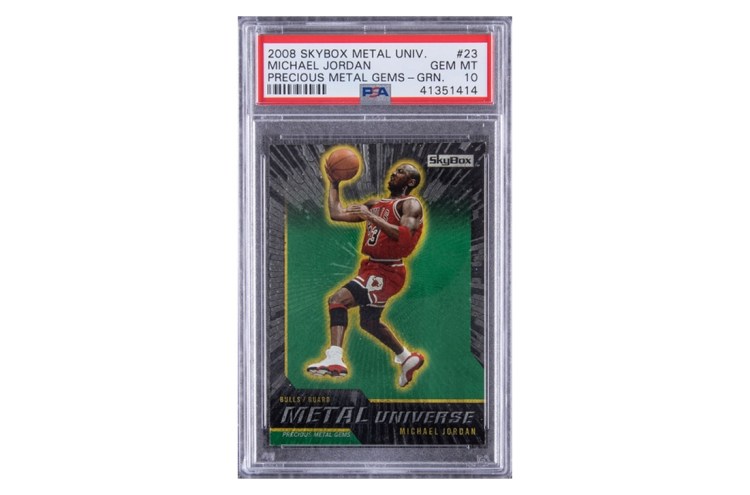 This PSA 10 copy of the Michael Jordan Precious Metal Gems (numbered to 10 copies) sold via Goldin Auctions for $222,630, but it wasn’t until 2012 and 2013 releases that the set expanded into other sports. In 2012 and 2013, Fleer Retro used the same design as the original precious metal gems and released for Basketball, Football, Baseball, Hockey, Golf, Boxing, Wrestling, and Marvel: 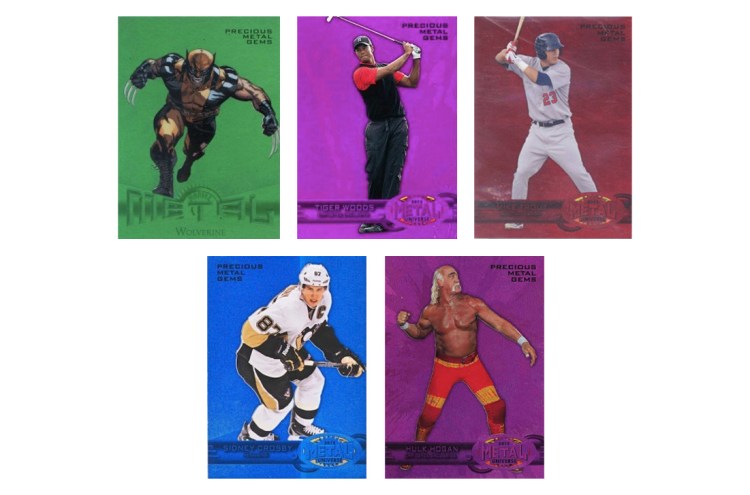 The iconic and original Precious Metal Gems sets and design have permeated more of the hobby and have now become popularized through its resurgence.

This resurgence culminated with a $915,000 sale of a 1997 Michael Jordan Green PMG by Heritage Auctions. 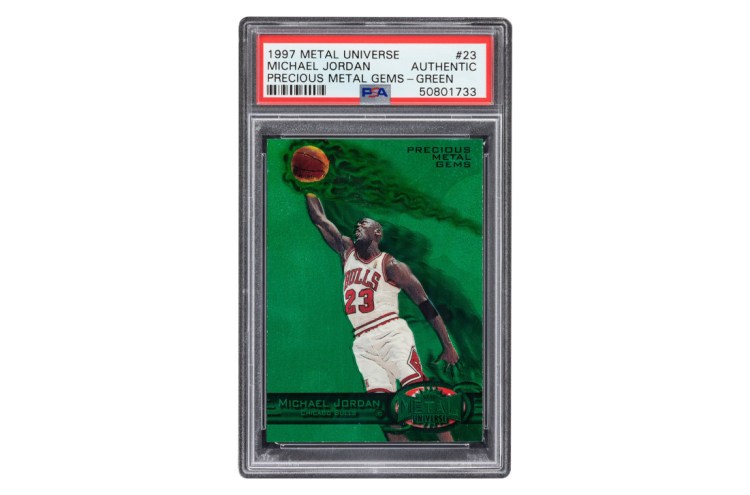 That $915,000 marked the most expensive PMG ever sold. It was an Authentic PSA copy of the Green PMG Michael Jordan (numbered to 10 copies) in December 2020. 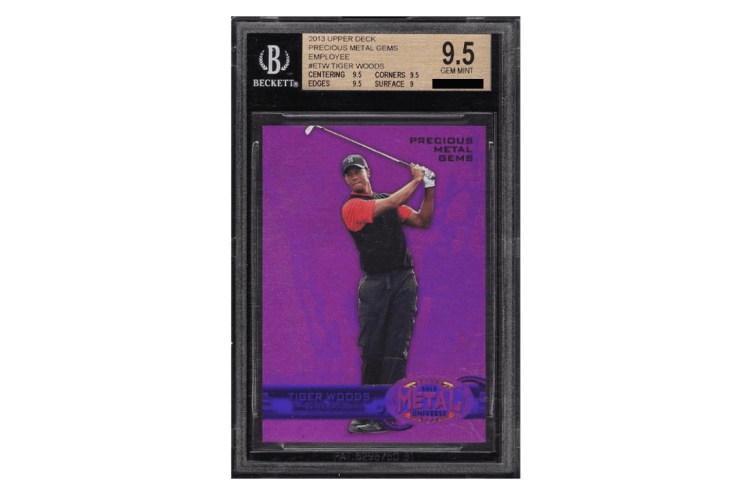 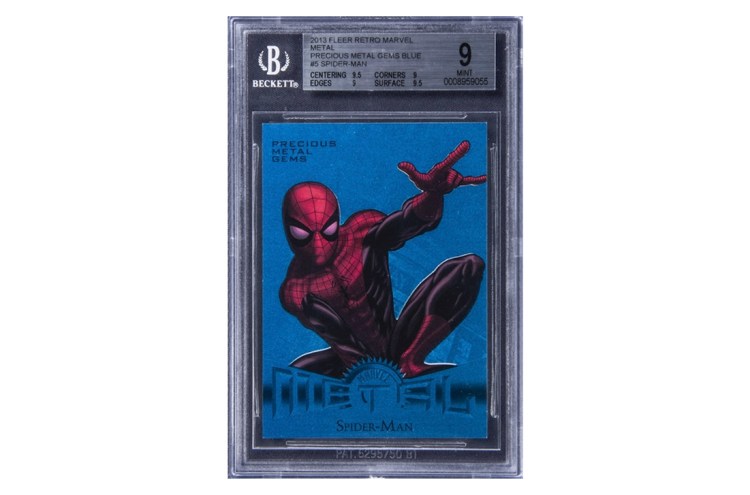 This card is numbered to just 10 copies and maybe our first instance of in-theatre performance affecting a card’s value.

Spiderman: No Way Home was released in mid-December and just passed Titanic to become the sixth-highest grossing film (domestic) of all time.

We’ve written about how an athlete’s performance can affect the value of cards and the popularity of the new Spiderman film seems to have the same effect. 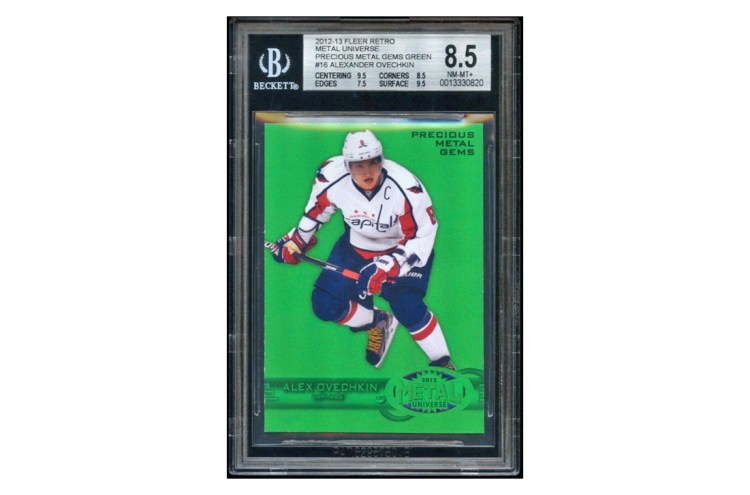 On Friday, December 17th, a seller accepted a $42,500 offer on this Alex Ovechkin Green PMG BGS 8.5 out of 10 copies. Ovechkin is an accomplished hockey player who could surpass Wayne Gretzky’s record for most all-time goals scored in the NHL.

Add this card to the list of non-1997, non-basketball PMGs hitting record numbers in the last few months. 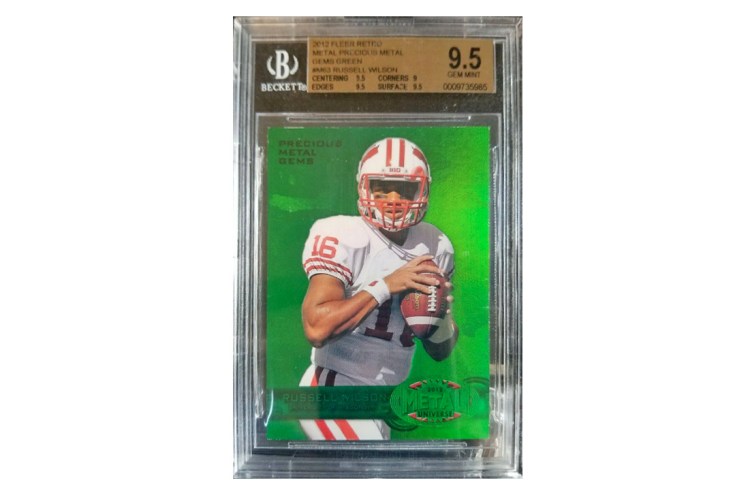 This Russell Wilson Green PMG is numbered to just 10 copies and sold on November 23rd for $20,000 via Buy It Now on eBay. This is the only copy of the card in a BGS 9.5 and there are no copies graded higher (including PSA).

The Seahawks struggled this season and did not make the playoffs, but Wilson is a Super Bowl Champion and has the 2nd highest career passer rating of all time. Although the card features Wilson in a college uniform (collectors tend to prefer pro uniforms) the $20,000 sale further confirms collector interest in PMGs outside of the iconic ‘97-’98 basketball set.