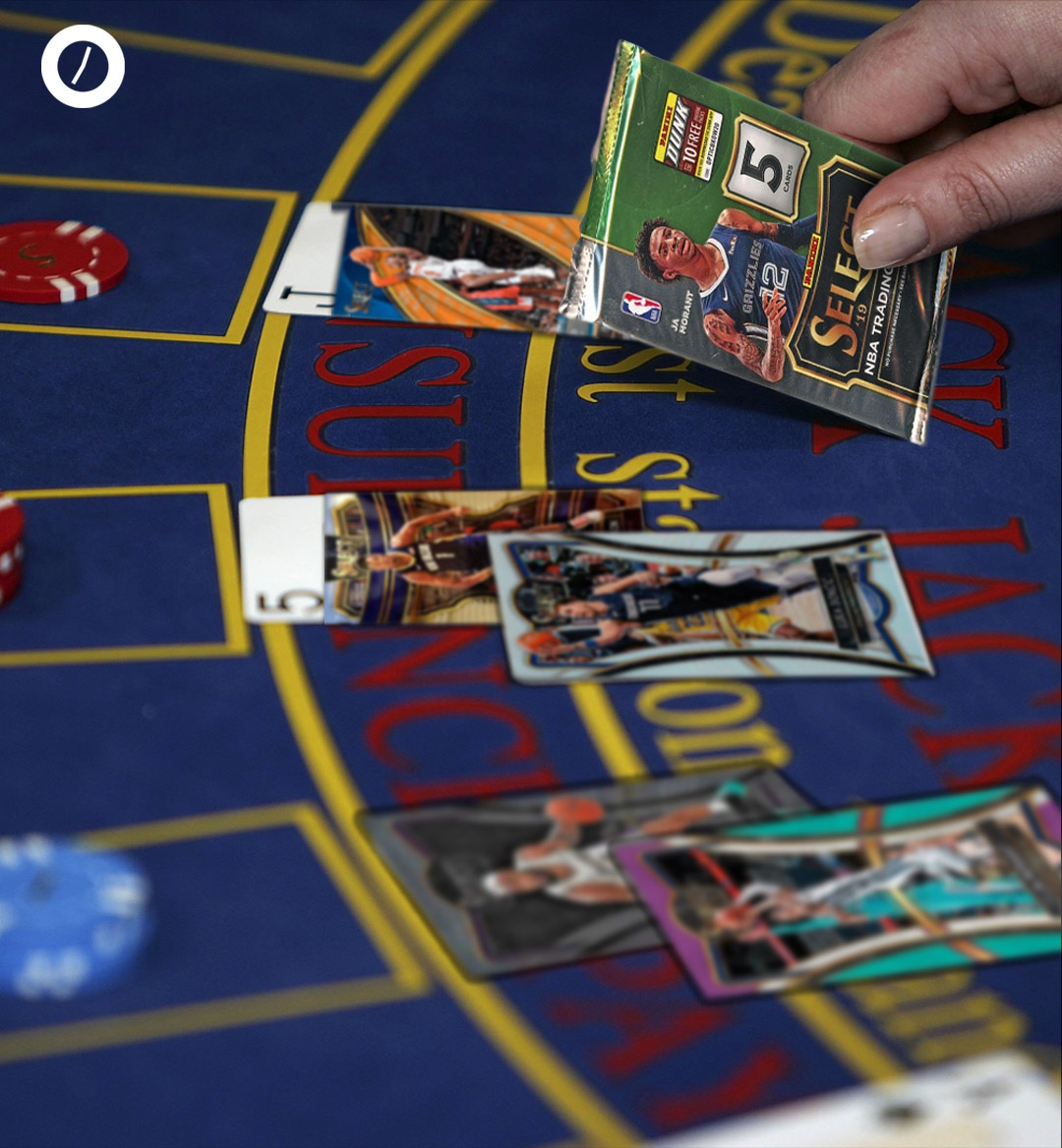 “I was literally shaking and almost crying because Kobe touched this card. It was an on-card gold auto. It was amazing.”

Ryan Shapiro has opened countless packs of cards over the past six months, but he knew he hit something special this time. His company, PullKingz, is one of the leaders in the emerging sports card breaking industry. For those who are unfamiliar with what a “break” is, followers of pages like PullKingz buy “spots” for a share of a box of sports cards in what has become 2020’s version of a casino, merging the camaraderie and fun of a blackjack table with the draw of an immediate slot machine type of jackpot. The gambling aspect of card breaks is one of its biggest attractions, and it’s no coincidence that it exploded during the quarantine when professional sports were shut down, giving sports gamblers nothing to bet on.

If it were a blackjack table, PullKingz would be the dealer. On that night, Shapiro was ripping open a box of 2017-2018 Panini Noir NBA that has only ten cards inside of it. Each of the ten spots cost $140, and every spot would receive only one card in a “hit draft” format, which means that everyone is randomly assigned a number from 1-10. If you are lucky enough to draw #1, you get your choice of what you think is the best card in the box. If you are unlucky enough to draw #10, you get the last card remaining after everybody else has taken their pick. The lucky person who bought into this particular break for $140 and drew the #1 spot was rewarded with a Kobe Bryant card worth over $7500. 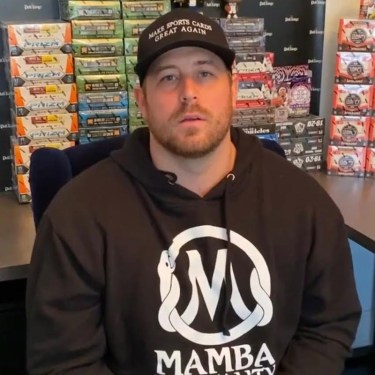 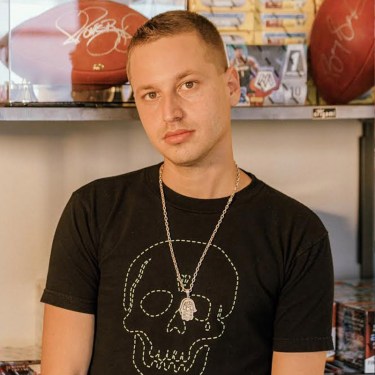 Shapiro collected cards as a kid but was entirely out of the game as recently as early 2020. While working at the luxurious Fontainebleau Hotel in Miami, he saw a social media post by Gary Vaynerchuk stating that he would “rather invest in sports cards than real estate”. From that point forward, Ryan was hooked.

“I hid in the extra bedroom in my house from my girlfriend, watching and buying cards”, said Shapiro. “I was a consumer. My girlfriend didn’t get it. She was like, “what are you doing?” We started PullKingz downstairs in my living room. I had to text my friends to jump into the breaks just to fill them. I never gave up, and I kept going.” PullKingz now has over 13k followers on their Instagram page and fill those same breaks within minutes.

Besides Gary Vee, Shapiro credits Mike Vinokur, owner of the wildly popular Pullwax Marketplace, for inspiring him to get into the breaking industry. Both reside in South Florida, which has become quite a hotspot for these types of pages.

“Mike from Pullwax is a true inspiration to me. When I first started this, I watched Mikey when he only had five people in his life, and I was buying in his breaks. It’s so crazy how life works. We work together now. I love Mikey. He motivates me to be better.”

For those that have never watched a Pullwax break, it is one of the best shows currently on social media. Vinokur and his team of young breakers - most notably “Lil P” - unbox an endless stream of valuable cards nightly.

“What Pullwax has always wanted to do is take the esports world and the sports card world and kind of mesh them together. Sportscards have been around forever. Esports is brand new. They are two totally separate generations, and I want to mix the two. When an athlete comes into my store, I want to sit down and play video games with them and then open a box.” said Vinokur, who credited his parents for getting him into sports.

“As a kid, I was a die-hard sports fan. My family came here from Russia as immigrants. The one thing they loved about America more than anything else was sports. Miami Dolphins, Miami Hurricanes, and the Miami Heat. When I was 13, I became a die-hard Pittsburgh Steelers fan. I loved Ben Roethlisberger. I went against my roots, and my family almost threw me out.”

Like Shapiro, Vinokur collected sports cards as a kid but was out of the game for a while before starting Pullwax. His first business was a successful high-end sneaker store in Miami named Sneak Peek Luxury.

“I was collecting in 2003-2004 when LeBron, Carmelo, and Wade were rookies. As time went on, cards were just not cool anymore.” Vinokur said. “I learned everything from sneakers. With SneakPeak, I developed great relationships with so many athletes from every league. I just got tired of being the sneaker guy. I wanted to get closer to sports.”

Breaking has become big business, with some products bringing in eye-popping dollar amounts. “The biggest break we’ve ever done was Panini National Treasures First Off the Line NBA”, said Vinokur. “One box. We had 500 people in the live. Each spot, I think, was $1800 to get in. There were 15 spots. Two teams per spot. It was NUTS.”

Celebrities and influencers have become commonplace in both Pullwax and PullKingz live broadcasts. One of the coolest things about joining one of their live streams is that you never know who will be in there.

“Everybody is watching it,” Shapiro said. “Steve Aoki did his first break with us. Now he is doing Aoki’s Card House. We had rapper Lil Pump in our live the other night also.”

NBA on TNT analyst Adam Lefkoe is a mainstay in the Pullwax live, talking sports cards and basketball with followers almost nightly.

“When I first started using Instagram to consume sports content, I was fascinated by the live breaking,” said Lefkoe. “Of all the channels, I found Pullwax to be the most entertaining. The music, the knowledge of modern boxes, the energy in the chat. It was like sitting at the blackjack table where everyone was high-fiving, not cursing out the dealer. That’s more of my vibe.”

Concerns in the Hobby?

Unlike some of the newer breakers, Ryan Johnson, owner of Card Collector 2, a brick and mortar store in Grove City, Ohio, has been running sports card breaks on his Instagram for over four years.

“I started breaking back in 2016,” Johnson said. “I got into it when my Instagram started to pop off. I got a couple of boxes at a show and decided to go live and see how quickly we could move them. It filled pretty quickly. It was an eye-opening thing for us and something I thought we could build on it, and it just led to more and more breaking.”

The @CardCollector2 Instagram has become one of the most popular sports card social media channels in the hobby with over 36k followers, and Johnson says that he has never seen anything like these past six months.

“We have had a pretty substantial increase in sales since the pandemic. A lot more people in-store and new faces getting in the hobby that are asking all sorts of different questions. Breaking has taken off. The store has taken off. Everything in general about the hobby is really hot right now.”

One might think that with the amount of time and effort it has taken to build such a large following and product allocation, that there might be some resentment towards newer breakers who are experiencing such relatively immediate success. However, Johnson doesn’t see it that way.

“It’s not really frustrating. If you’re brick and mortar, you have the option to break as well to get more product. You wanna get as much product as you can. If you break the product and you order more, you will get more. It doesn’t really bother me that these new breakers get a lot of it because they break a lot of it, and they take a lot of the junk too.”

It’s fair to wonder how a return to normalcy in the coming months will affect the industry. As things continue to re-open and people have more choices of how to allocate their discretionary income, are the current prices of a box of cards sustainable?

“The sustainability of prices and boxes going up so much is not really there,” Johnson said. “You are basically pricing out new consumers who don’t have super deep pockets because the hardest part about it is these boxes have gotten to these values in time. It used to be if I buy a box of Prizm, a year from now, it’s worth two or three times as much. When Prizm basketball came out last year, they were $440. Now they are $2500. So you are seeing a 5x increase in an eight-month period rather than a 2x in a year. When COVID happened, the product wasn’t available as much, so that shot everything up. I think over time, as product catches up, there won’t be as much of an increase.”

It will be exciting to see how things shake out in the coming months and years. Will the rise of card breaking popularity during the pandemic begin to fade? Will all of these new faces in the hobby find something else to spend their money on? Or was COVID the perfect storm that opened up the eyes of mainstream society to a new way to gamble on sports? Only time will tell, but this feels to me like the start of something huge.