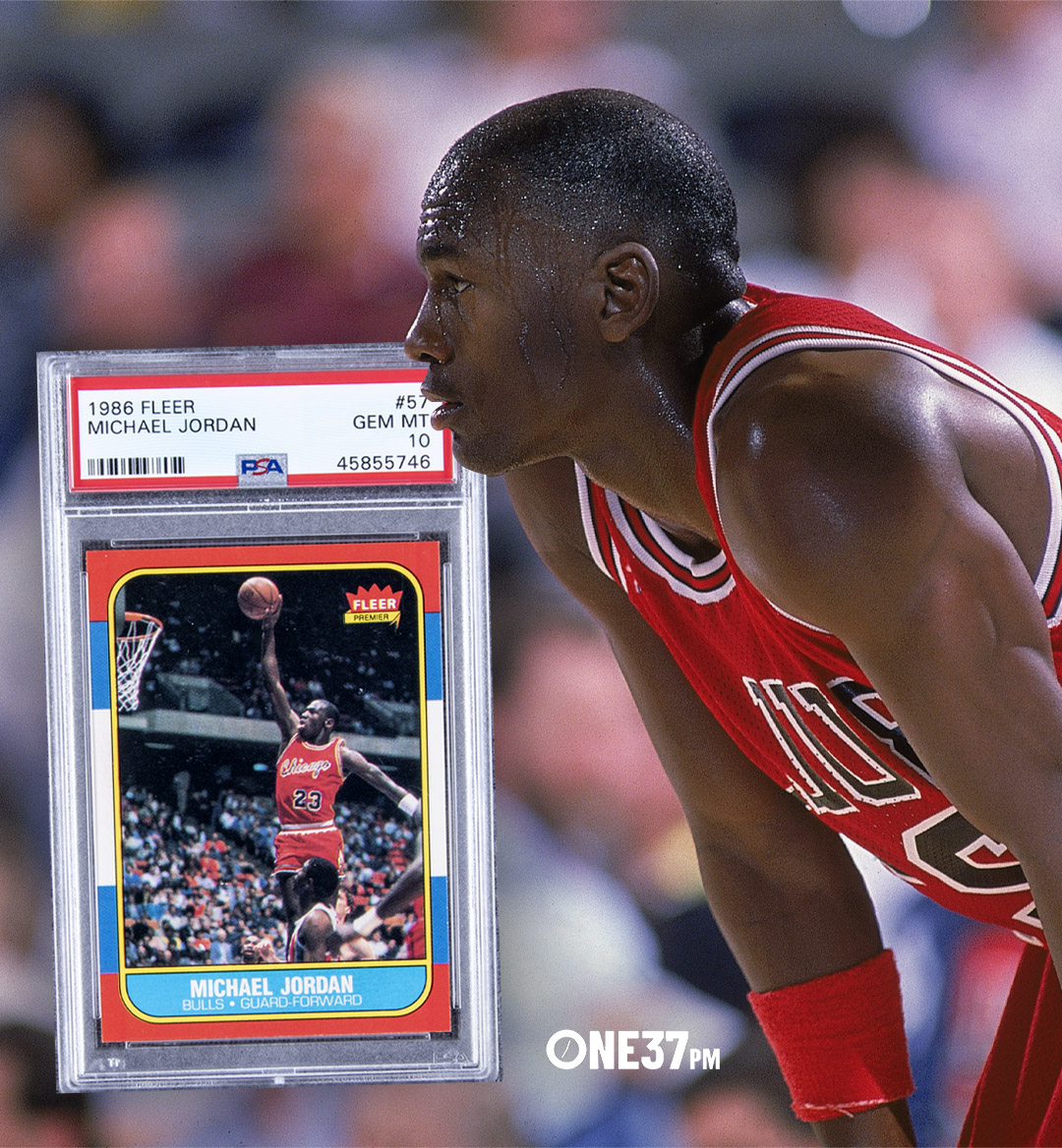 The sales created a frenzy of national media attention on platforms like CNN and many began predicting that the card would reach $1 million in value.

Values of the same card in a lower grade began skyrocketing (for example, the PSA 9 appreciated 340% from the end of December to the first week of February), and many people took on a “to the moon!” mentality with other established, retired veteran players and their rookie cards. 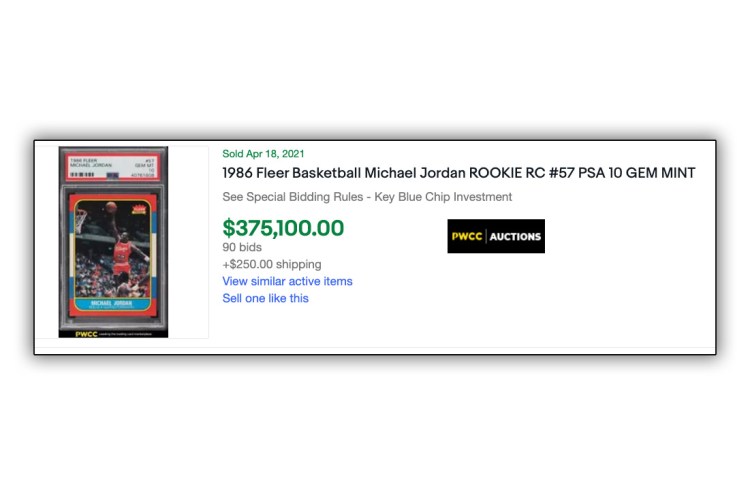 This represents a price drop of 49%.

While you can argue not all PSA 10s are created equal (some have better centering than others) and that bidders may be scared to spend a large amount of money outside of an auction house, this card has generally trended downward since its record price set January 30th.

This downtrend isn’t just limited to Jordan’s iconic rookie, we’ve seen similar trends with other cards and it might leave you thinking about what might happen next.

Before we panic and start to think the card world is falling, we can look at some data to help us normalize these trends and create confidence in our collecting and investing endeavors.

Am I Too Late? 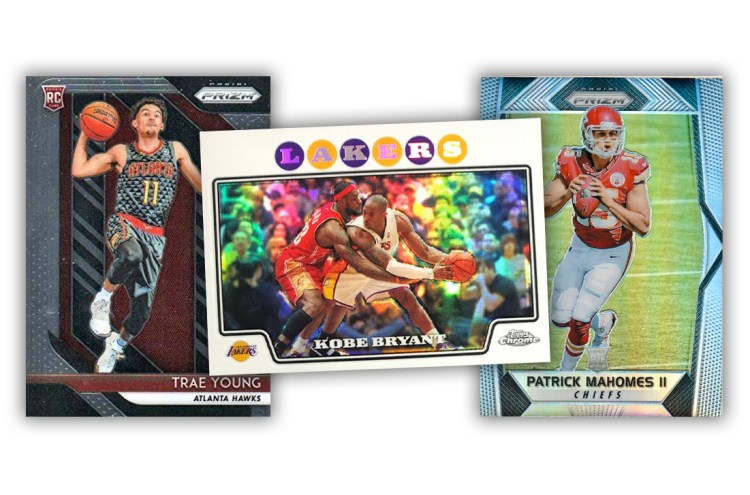 You might read that $375,000 for a sports card as a worrisome decline means you missed the boat big time to participate in the hobby, but read on.

When I first started buying sports cards, paying $75 for an ungraded Patrick Mahomes Prizm rookie or $5 for an ungraded Trae Young Base Prizm rookie was overpriced. I felt like I was reaching when I paid $450 for a 2008 Topps Chrome Refractor featuring Kobe Bryant and Lebron James (a card that sells for around $25,000 in a PSA 10 grade today).

This was about 2 years ago, and at that point, you could have bought just about any sports card in existence and it’s likely worth much more today.

When I tell people that, their first question is always whether or not it’s too late to get into sports cards. It always depends on your goals, whether it’s collecting, investing, or both, but there’s always an opportunity to find awesome cards at a great value.

The reality today is that it’s harder (and more expensive) to get into sports cards, so your biggest opportunity to do well is to understand the market better.

Understanding the market better starts with you thinking for yourself and not blindly following advice (mine included). You didn’t need to be savvy two years ago, you just needed to buy cards to ride the market-wide wave. Now, it’s the opposite, you need to be savvy and you need to get ahead of the wave before it forms.

We’ll use a few different cards as our case study for developing savvy and understanding how and why those metaphorical waves (demand) form and crash.

Is it Surprising That the Jordan Card Dropped in Value? 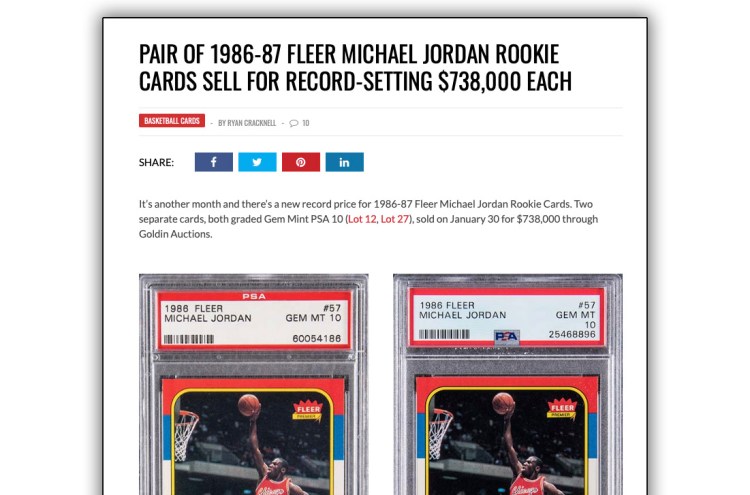 Over the last 2 years, I’ve watched various cards hit new highs, slowly retreat, plummet, and slowly increase again. It’s hard to be objective in the moment, especially when fear of missing out emotions hit, but doing so will make you a savvier buyer, and a savvier seller.

In order to better understand those trends, I use Cardladder, but there are plenty of options available to you. Let’s look at a price history graph for a specific card below, which they’ve hilariously dubbed “the middle finger graph”.

The middle finger graph looks like a middle finger - a rapid ascent on the left side into a peak, and then a rapid decline, leaving those at the peak feeling a little bit like the card value has given them the middle finger. 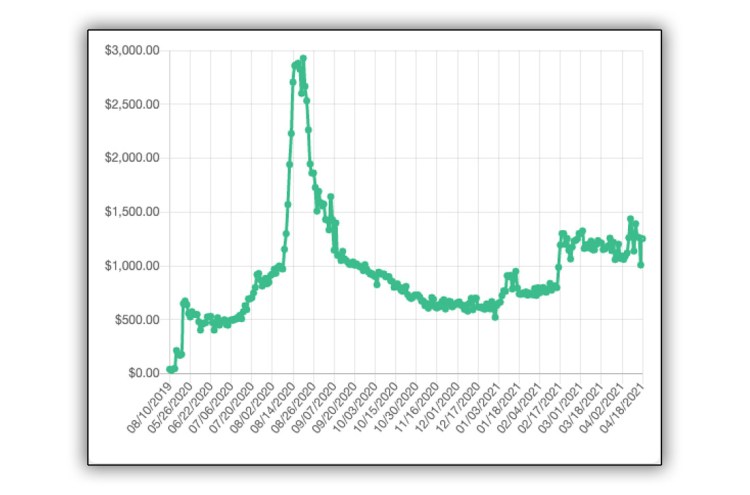 This chart represents the Kylian Mbappe 2018 World Cup Prizm Base PSA 10 card. It tripled in value in a matter of weeks, then continually and gradually retreated for a few months before making a resurgence near the end of February.

If you want to be savvier in sports cards, what lessons can you take away from this?

Let’s look at another, similar graph: 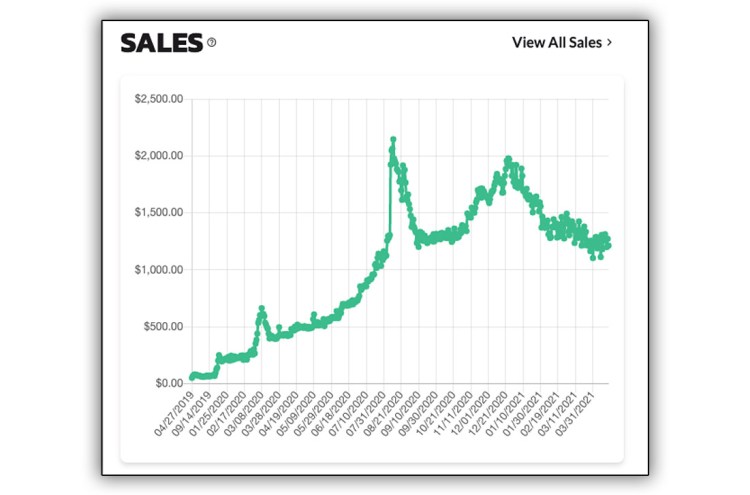 While both of these graphs represent higher population cards of younger, less established players, it can help you understand that the market is cyclical, and there are much better times than others to buy and sell.

As you think about timing, consider a few factors:

When most people buy cards, they’re looking for clues from the market (other buyers like you). Consistent price increases signals that other people believe a card has value and sometimes logic can escape us when we enter a bid or hit the Buy It Now button.

One way to combat this is to think about the opportunity cost. Before you spend $3,000 on a base prizm Kylian Mbappe, what could that instead have gotten you? At the time of its peak, $3,000 could have gotten you a Kevin Durant Topps Chrome Rookie Refractor BGS 9. A short print (limited copies produced), of a top 20 (maybe 15) basketball player of all time.

But now, it’s time to turn our eyes back to the Michael Jordan card.

After seeing two “middle finger charts” for other players, would you be totally surprised if the same thing happened to Jordan’s rookie card?

While the cards themselves are not an apple-to-apple comparison (MJ is MJ and he only has one true rookie with a population significantly less than Mbappe and Doncic) the consumer behaviors are similar: 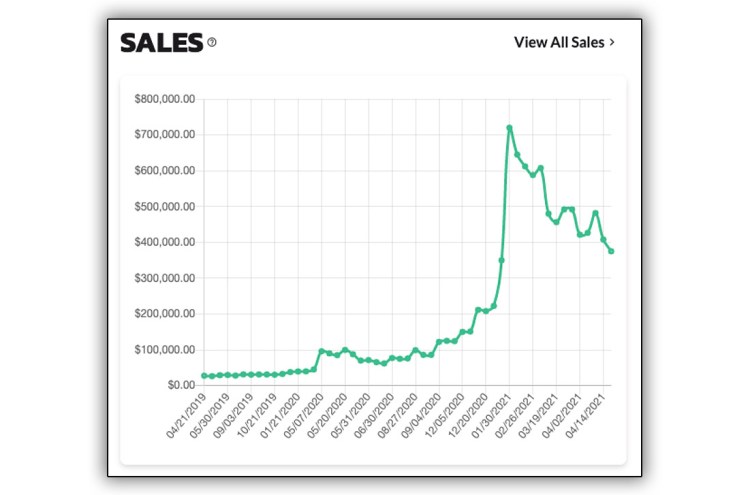 There are far fewer sales of this card given its lower number of copies in the market, but we can still see some peaks and valleys, with record prices followed by some declines, and we can see the beginnings of a “middle finger graph” forming after the most recent high.

As a savvy sports card collector and investor, this shouldn’t totally surprise you. Sports card values aren’t always linear and there are peaks and valleys that occur.

While it’s been nearly three months since the 2021 record sale of this card, we’re seeing a similar percentage drop of 49%.

This teaches us that we can use data from other card sales, and historical trends from the same card sale to help us understand where a card may be going next (if a wave is forming or ending).

Supply and Demand Should Always Be Your Guide 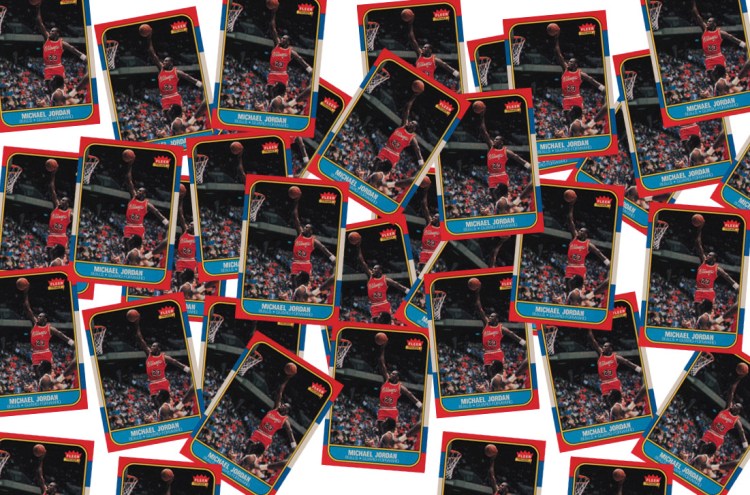 For those trying to find the competitive edge in sports card collecting and investing, the edge always goes back understanding supply and demand. Supply is measured in the number of copies of a particular card in a particular grade (it’s easier to understand for flagship rookie cards).

It gets a little trickier with modern players, parallels, dual autos, sets, etc., but there are a lot of resources to understand supply.

Demand is much harder to understand and people who are in-tune with it can see when new waves are forming.

In the case of the Michael Jordan Fleer 1986 PSA 10 - it has a lot going for it. Relatively low population. The recognized single rookie card for Michael Jordan. One of the greatest and most popular basketball players of all time. That’s why even in a decline, it still commands a nearly $400,000 price tag.

That price tag is one of the most overlooked influencers of supply and demand.

In May 2020 there were a total of 7 copies of this card on public record. That represents 2% of the population of the card.

Remember when I said that paying $75 for an ungraded Patrick Mahomes Prizm rookie felt expensive? Well, at that time, you could have purchased a Fleer Jordan rookie PSA 10 for $27,000.

As prices increase to certain levels, it’s hard for people to hold onto a card, no matter how much they love it.

The card sold 20 times from March of 2019 to March of 2020 publicly. That means that there are at least 20 people who could now make life-changing money by selling their copy (and many others who bought privately or before March 2019).

The dozen or so copies of this card that have sold in 2021 are likely not going to be for sale for a very, very long time.

As more copies sell in 2021, the lower the available supply becomes. Most collectors have a price, but as more and more of them sell for significant gains, it's going into the hands of people who can be patient and won’t sell, even on a decline.

It would take a new record for them to send their cards into the auction houses.

We can see the same trend with the 2018 Kylian Mbappe Prizm Silver PSA 10: 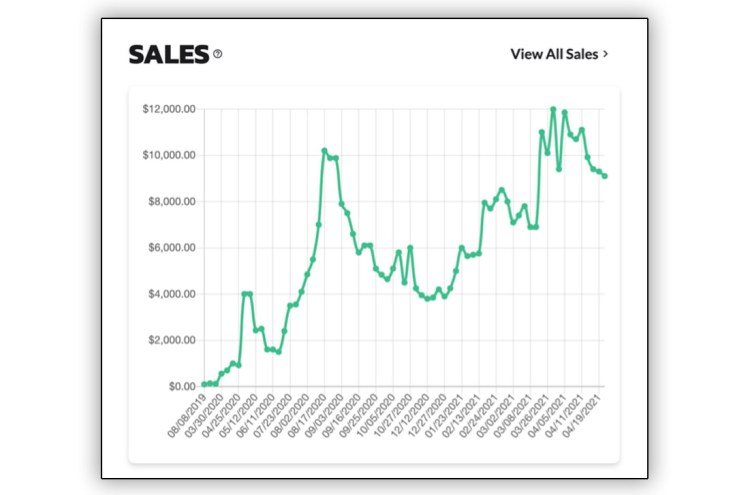 The card hit a new low of $3,800 back on December 12th, 2020. 4 more copies sold leading up to 12/30, about 2% of the total population. We can infer that a few people saw a downward trend and decided to sell their copies. 5 total copies of the card sold in December, but the next copy wouldn’t sell until January 21st. It jumped back to $5,000, and within 3 weeks and started to gain momentum. The card got as high as $8,500 on February 25th, before coming back down to $6,800 on March 5th. In January, this card sold just twice, but in February, it sold eight times. In March, it sold nine times, getting as high as $11,988. Eight copies of the card have been sold in April, with a week left in the month.

12% of the population of this card have now sold at new highs, and those 25 copies probably won’t be sold until a new level is reached, thus diminishing the available supply.

This is the likely explanation for the cycles of high prices followed by declines (sometimes in a very short period of time) - supply dries up and a buyer who really wants a card will overpay in the moment. After that overpay, other owners may decide it's time to sell that particular card. Supply increases, and it’s usually followed by a price dip because you don’t have to overpay to secure the only copy of a card available.

But as more and more people buy at higher prices, it raises the bar (price) for when they in turn will sell their copy if they chose to do so. At least 16 copies of the Jordan Fleer rookie have sold in 2021 and those buyers aren’t likely in a rush to sell. That leaves 300 copies across collectors and investors who still may choose to sell and take profits, but as more and more sell, available supply will decrease.

Once someone buys your card for $6,000, it likely would take $9,000 for them to consider parting with it. If the supply is low enough, and there are enough new owners who have set a new “floor price”, supply will dry up and the cycle will continue.

Tying It All Together 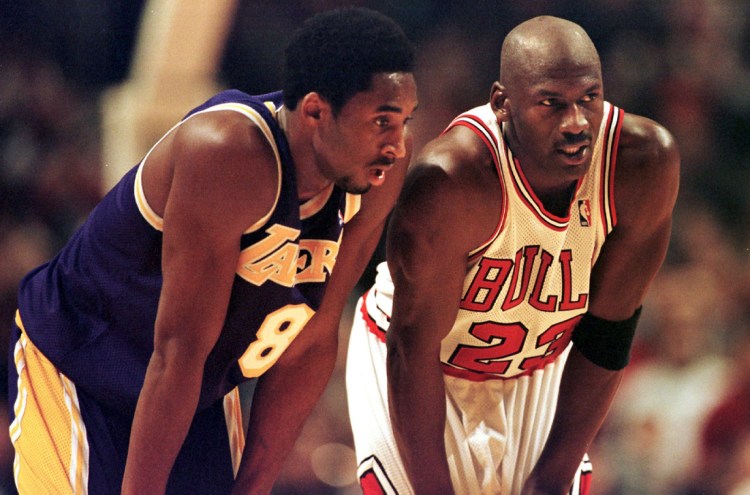 Studying the market and trying to learn the “why” behind price trends will serve you well in the sports card market. While most of us may never be able to afford a 1986 Michael Jordan Fleer PSA 10 rookie, it doesn’t mean we can’t use it as a case study to further our own buying and selling habits.

Buyers and sellers exhibit similar patterns, whether it’s for a $70 card or a $700,000 card and your opportunity is how non-linear those trends are:

The path to this being a $1M card, if it ever will be, is not a straight line. pic.twitter.com/EIsFAtbz26

There are lots of strategies to get ahead of the market, but thinking for yourself and understanding the data goes a long way for finding opportunity. To me, this is why buying, selling and collecting sports cards is so fun - it moves so fast it creates inefficiencies and opportunities for everyone. The quicker you can recognize the patterns, the more likely you are to be in “early” on something else.