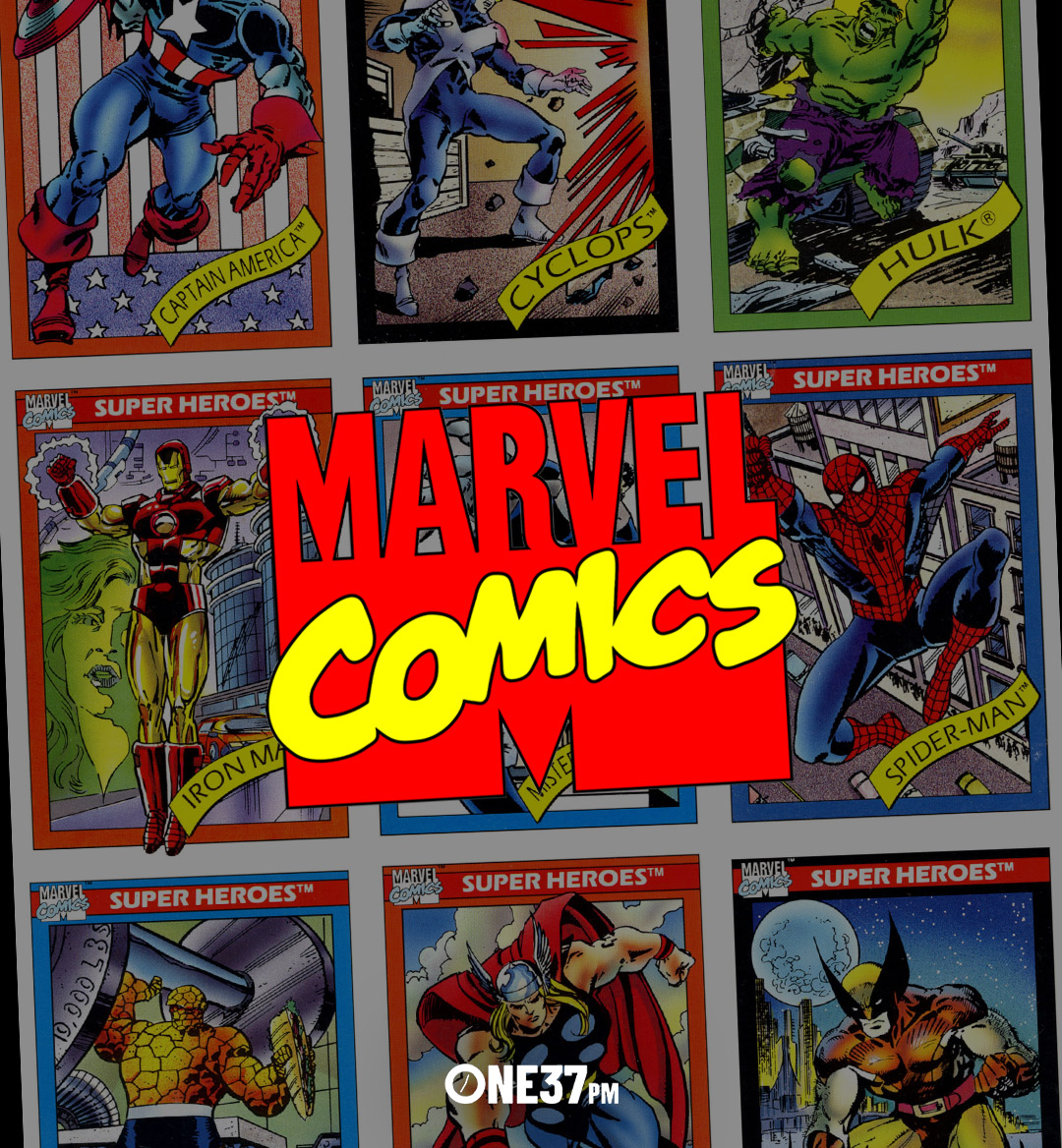 Sports cards are on our minds a lot these days, especially rookie cards. And for good reason! There’s nothing better than landing a gem mint copy of your favorite Hall of Famer in the closing seconds on eBay—and bonus points if it’s a flagship card from that player’s rookie season.

Rookies tend to be the most coveted of all players' cards among collectors, and from the investment side, they also tend to inflate the most when things are going well. Whether it’s Prizm or Select Silvers in basketball, 1st Bowmans in baseball or Young Guns in hockey, when it comes to rookies, those familiar with the hobby know right where to go.

But have you ever given non-sports rookie cards a chance? Not just the first edition Pokémon cards that are out there, but the “superhero gold” from storied brands like Marvel?

In this guide, I’ll break down the top Marvel trading card “rookies” to keep your eye on. But first... 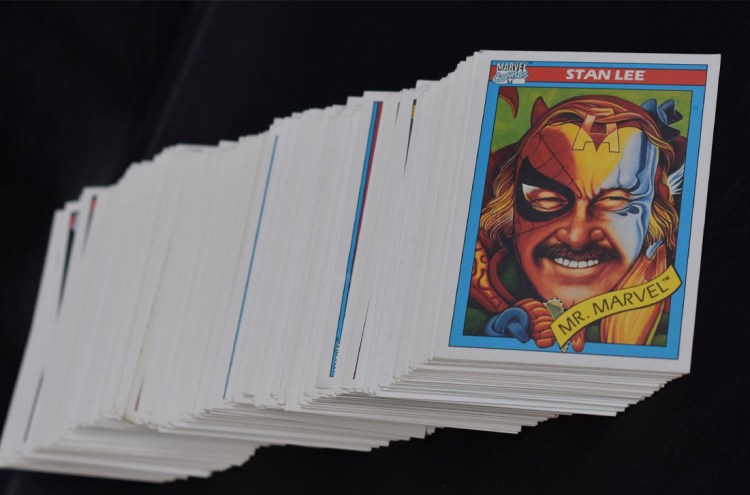 I can think of many reasons. Here are three of the best:

Given the above, I see a lot of upside, especially in the long term. Don’t get me wrong, there’s short-term value here too, especially if you follow a particular character’s hype.

But forget the movie release calendar for just a moment and consider this: Superhero rookie cards aren’t like sports cards; there hasn’t been a ton of them graded to date. As kids, we didn’t really think to take care of them either, so there can’t be very many gem mint 10s.

Does it feel like I’m building a pretty solid case yet? Let’s dive into it a bit further. 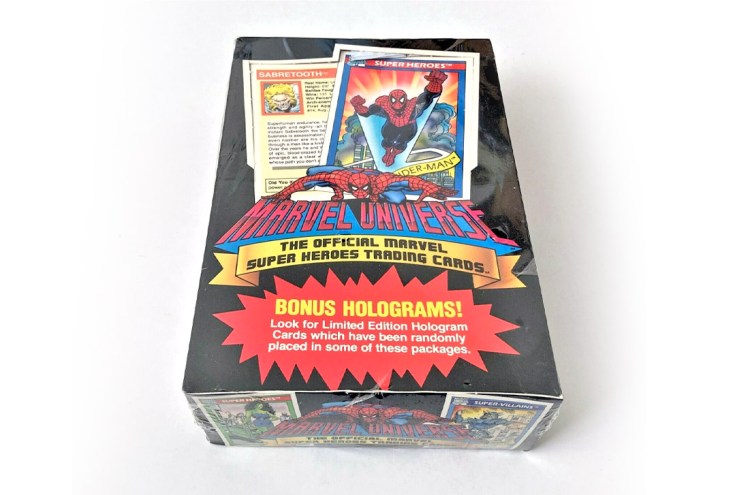 When you search eBay for “Marvel rookie PSA” cards, you might be as surprised as I was to discover that most of the popular cards that come up are all from the very same set.

I did some digging, and as it turns out, the first of four sets from Impel (and SkyBox as they later became), happens to contain the inaugural “rookie” cards of all your favorite Marvel superheroes and villains. That should make things easy, right? Let’s get into it.

The 1990 set has a 162-card checklist. The first half is dedicated to individual hero cards, while the second half includes several subsets. There are even six cards labeled "rookies" that could prove to be a play if you’re a Ghost Rider or Guardians of the Galaxy fan.

You could flip a high-grade version of pretty much any card from this set because they’re all quite rare. And since it’s the de facto Marvel rookie release, you can bet there are a lot of collectors out there trying to piece together the whole thing.

Here are a few of the favorites, listed in the order they appear in the set: 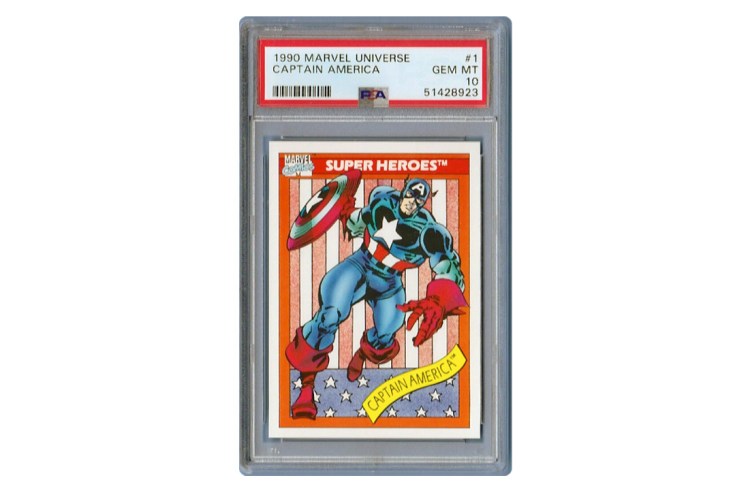 Leading off the set, as one might expect, is “the Cap” himself: Captain America.

Fun fact: There’s a Captain Britain rookie card in this set as well, card #40. It has a PSA 10 population count of just 2, making it extremely rare. 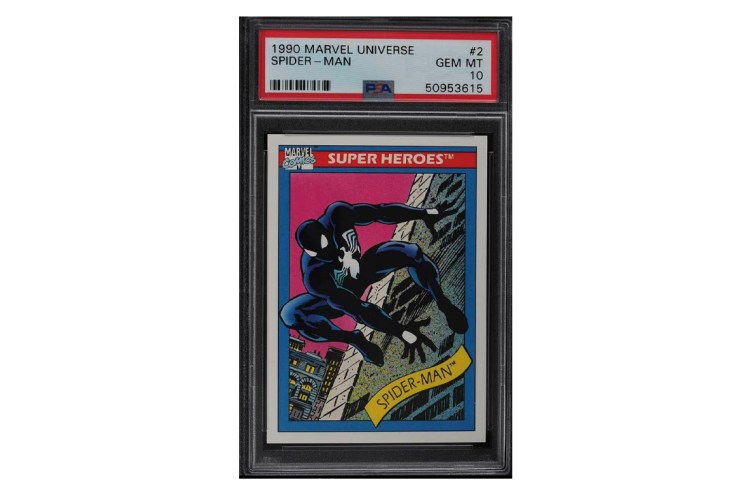 Spider-Man is the next hero up in the set and he’s featured throughout in several different spots (more on that in a moment). In the #2 spot, though, he’s rocking the black suit, courtesy of his Secret Wars storyline with archnemesis Venom. In fact, if you’re into this card, you might want to look into picking up the graded comic book (Secret Wars #8) too. 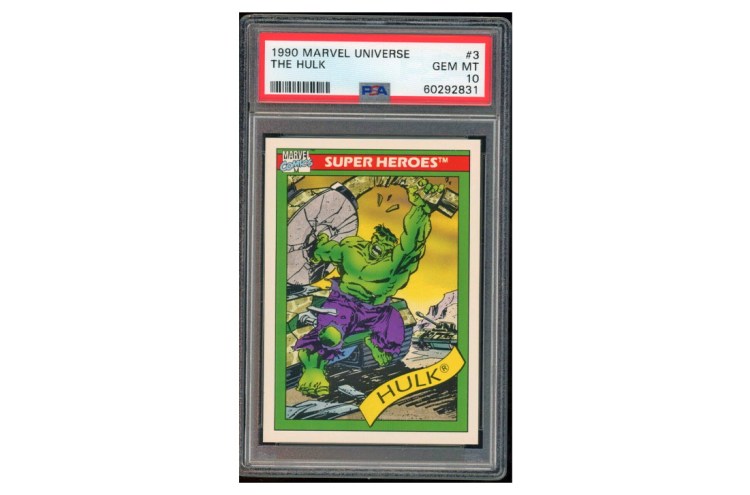 Next up is everyone’s favorite green monster, the Hulk. Hulk’s rookie card last sold at auction for a cool $1,000, probably because there are only 21 PSA 10s! The card itself is pretty badass, showing the Hulk doing what he likes to do best: SMASH. 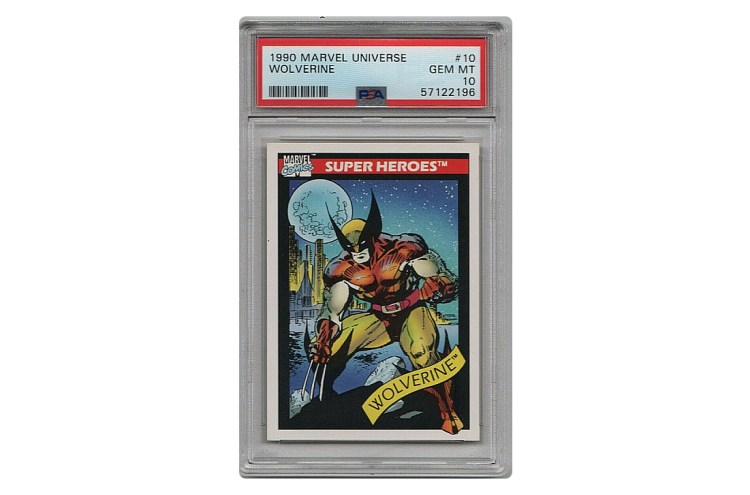 Wolverine is always a safe rookie card bet—he tends to be featured a lot in movies and is many people’s favorite character among all the X-Men. He has multiple cards to choose from as well in terms of this particular set. 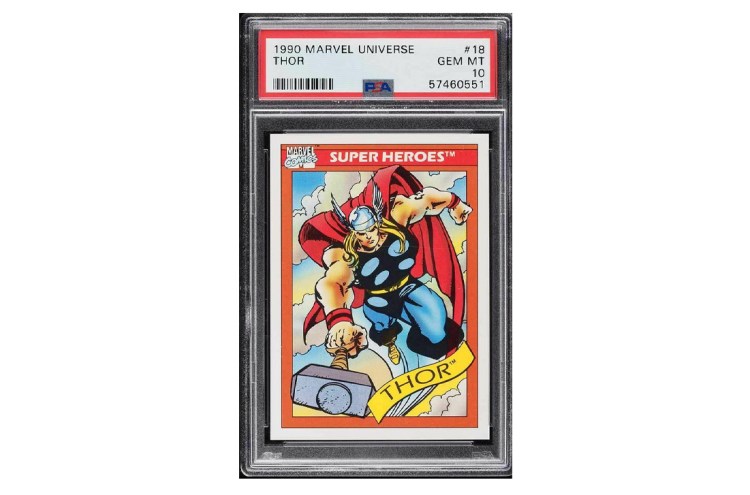 You may have noticed you can find a lot of key Avengers rookie cards throughout this set. Thor is no exception. This one’s tough to find and will run you between $900-$1,000 on eBay right now in the form of "Buy It Now." 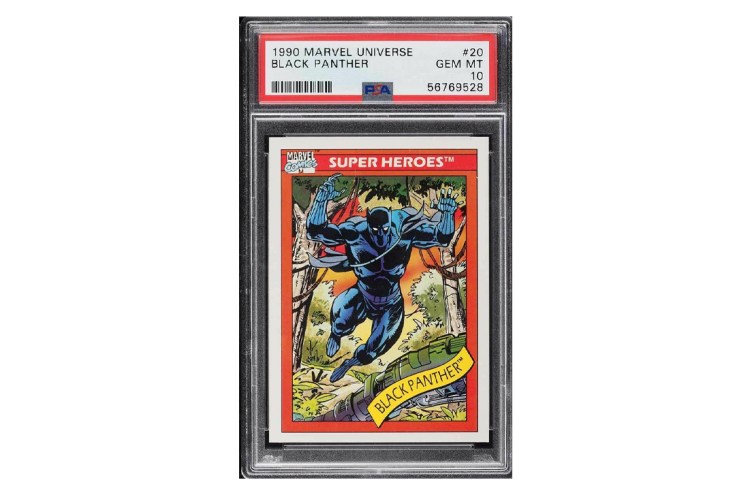 Let’s be honest, Black Panther was making this list regardless, but with Black Panther: Wakanda Forever set to release in July 2022, this rookie card’s a no-brainer. 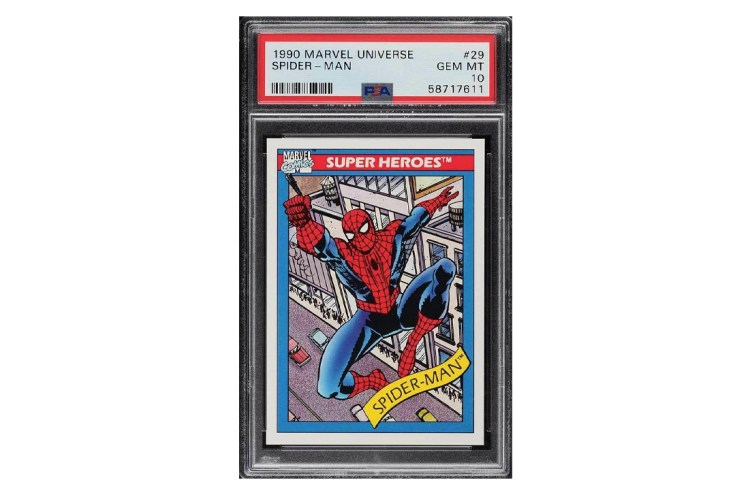 Now, this may be the second official Spidey card in the set, but it’s actually the first to feature him in his classic blue and red uniform. That alone makes this one a hidden gem. 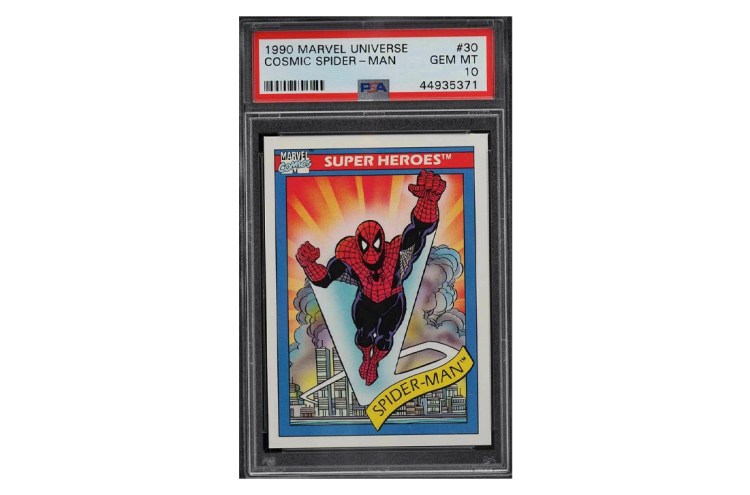 With just 14 PSA 10 copies, “Cosmic” Spider-Man isn’t very easy to find either, which is why I’m featuring the third base Spider-Man rookie here as well. Personally, I like the look of this classic Spidey card better and the extra level of rarity goes a long way.

Also, this card comes in a super tough hologram variation at a rate of 1:36 packs. If you factor in that it’s just 1 of 5 chase cards in the hologram set, then your odds are more like 1:180 packs. 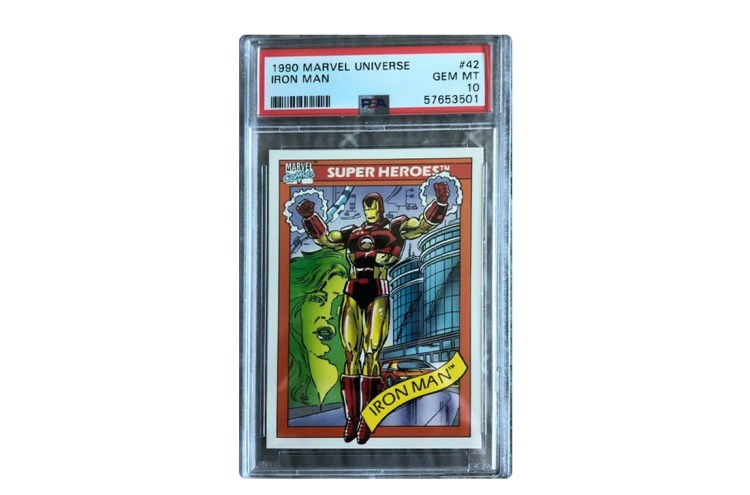 You might’ve been wondering when we were going to see Tony Stark in this set! That’s right, you know Iron Man’s rookie has to be worth a lot. With just 15 PSA 10 copies, you’re looking at paying $1,500 for this card. 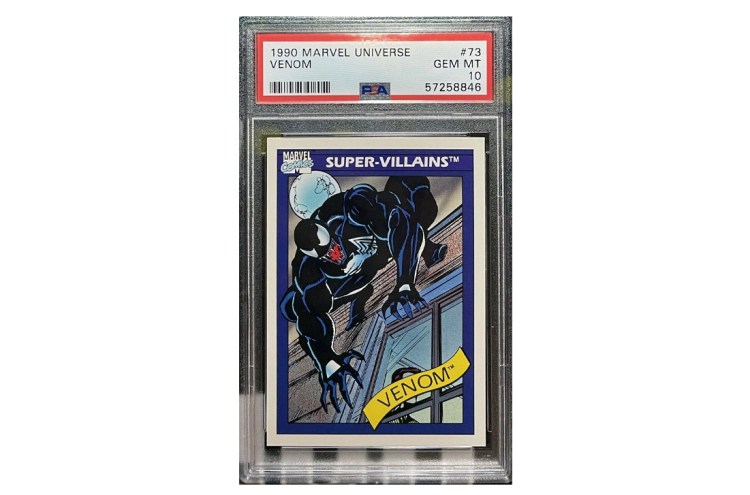 Venom: Let There Be Carnage is set to release in theaters on September 24th, so it’s high time to stock up. There are 62 PSA 10s floating around and one just sold on July 3rd for $700, so there’s still plenty of upside left.

One thing to note: Carnage is not featured in this 1990 Impel set. The 1992 Marvel Universe set, however, does feature him. 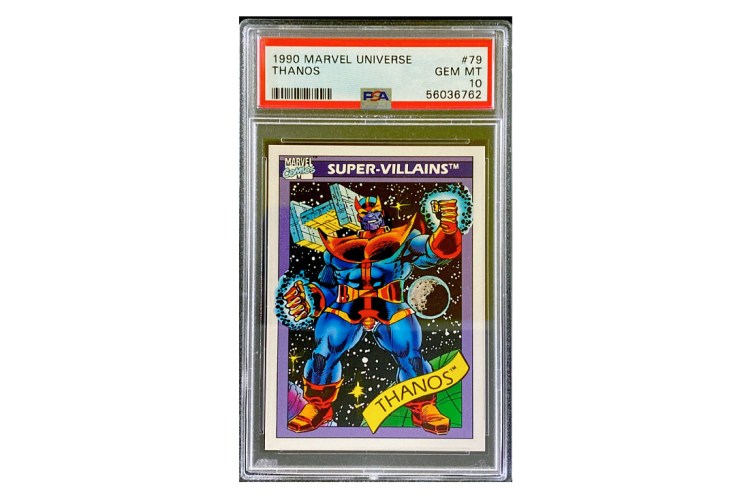 In recent years, the Marvel cinematic universe helped put Thanos on everyone's minds and on everyone's maps. As such, the value of his rookie card has already skyrocketed. Of the 42 gem mint copies, those for sale on eBay will currently run you between $750 and $1,500. 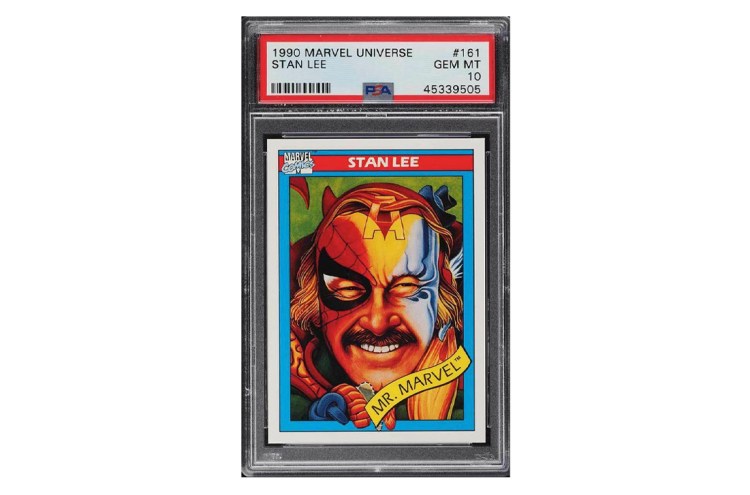 Last but not least, Mr. Marvel himself. The next-to-last card in the entire set (minus the checklist), no Marvel rookie set would be complete without Stan.