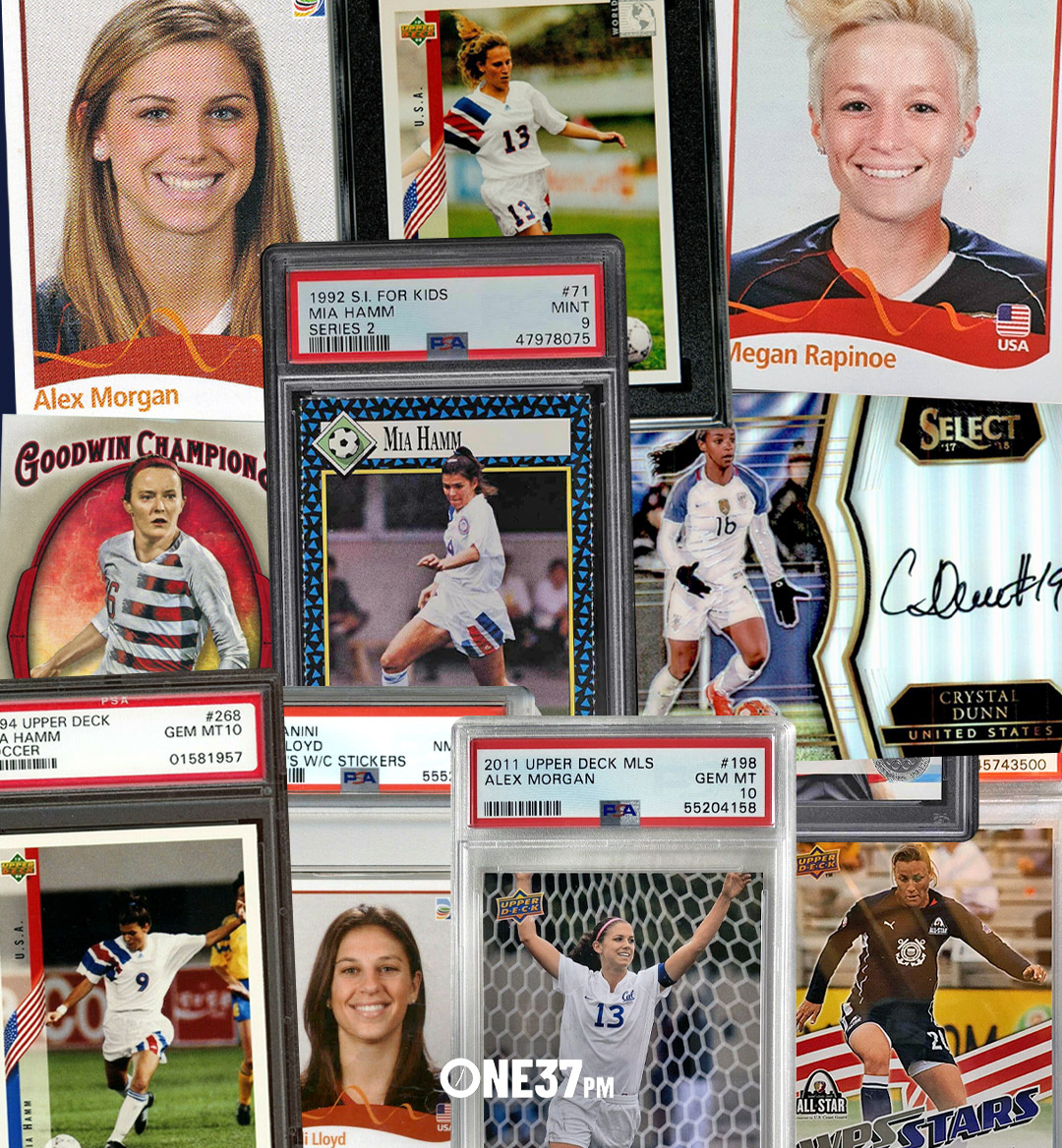 With the Tokyo 2020 Summer Olympics postponed due to the COVID-19 pandemic, they are finally set to kick-off on July 23, 2021, putting the world's top athletes on the grandest stage.

For me, the Olympics are such a fascinating event because sports that I would never normally watch get to be front-and-center, turning medal-winners into household names throughout the world. When I think of athletes like Jackie Joyner-Kersee, Simone Biles, Carl Lewis, and Michael Phelps, I can remember where I was when I watched them dominate in their events. I also remember the sense of patriotism and pride I had watching as they stood on the podium to receive their medals alongside the American flag.

In the sports card hobby, an event like this presents an interesting opportunity. I always like to talk about "relevancy" when discussing which cards I typically invest in. A good example was in January, when I was at the Dallas Card Show and saw a tweet from Adam Schefter that Detroit Lions quarterback Matthew Stafford was about to be traded. I immediately bought up every Matthew Stafford rookie card that I could find, knowing that once the trade went down, Stafford would be in the public spotlight, likely sending the value of his cards soaring. Sure enough, he was traded that night and within a week I sold all of the Stafford cards I purchased, tripling my money.

Soccer is the most popular sport throughout the world, and while the United States men's national team (USMNT) failed to qualify this year (for the third consecutive time), the women's team (USWNT) is absolutely dominant, winning the gold medal in 1996, 2004, 2008 and 2012 before losing in the quarterfinals to Sweden in 2016.

After the game, there was a lot of tough talk from USWNT goalie Hope Solo calling the Swedish team "cowards" because of their style of play and saying the the "better team lost." Amazingly, they won't have to wait long for payback, as they drew Sweden in the first game of this year's Olympics.

“We have very high standards for the team, which is championship or total failure, so we felt like total failures. It definitely left, I wouldn’t say a bad taste. I think it left a fire under people to never let that happen again.”

Needless to say, there will be a lot of juice behind the USWNT's attempt to recapture the gold medal, and in my opinion, that attention will have collectors in full buying mode.

This list of 12 cards includes some USWNT current players, as well as former players whose legacies will be discussed at length in the coming months. 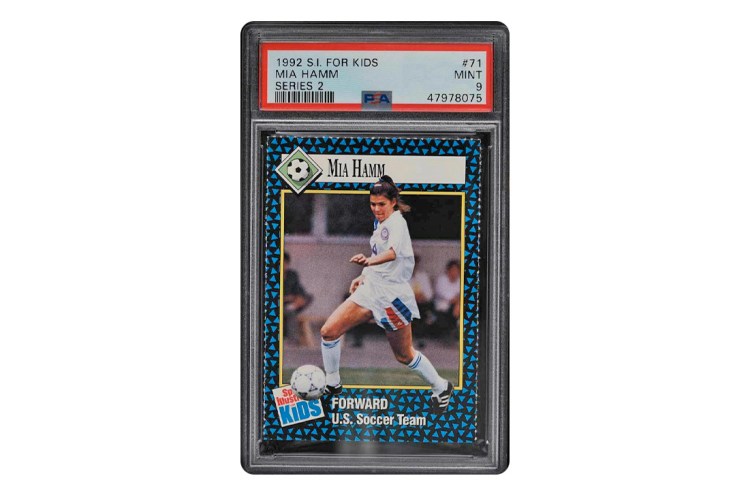 With only (1) PSA 10, (25) PSA 9s and (25) PSA 8s in the population, it comes as no surprise that this Mia Hamm Sports Illustrated for Kids card is the "Holy Grail" of women's soccer cards. Simply put, Mia Hamm is the greatest women's soccer player in the history of the sport, and this is her most coveted card.

Obviously with a card this rare, they will not be easy to come by. It will be interesting to see what happens to the value of the ones that are already graded as the stories of her greatness are told repeatedly during the games, reminding the world just how dominant she was.

If you head over to eBay, there are plenty of raw examples for sale, but these cards are perforated and torn off of a full sheet, making them very difficult to grade.

There are actually two versions of this card in the 1994 Upper Deck World Cup set, the standard one and the English/Spanish variation. There are only (35) PSA 10's of the standard card in the population, with only (8) of the English/Spanish one receiving PSA's top grade. If you can't find a 10, PSA 9s might be the play here, as there are only (66) in the population and sell for around $200. I really like the combination on this card of relevance, rarity and GOAT status. 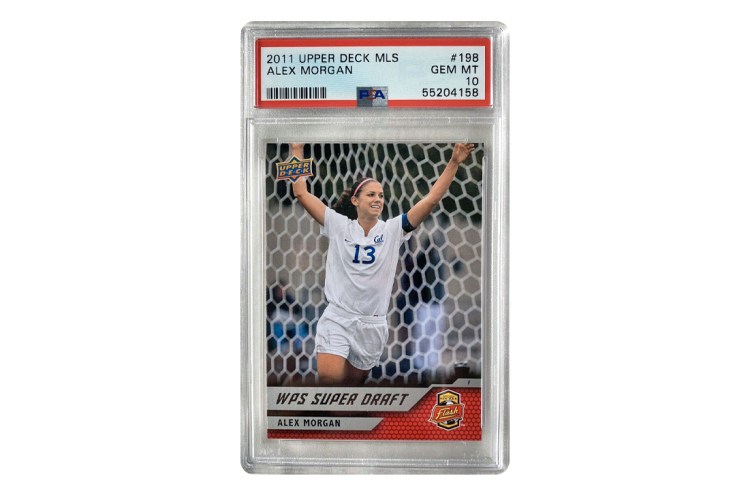 Alex Morgan is the first current player to hit this list, and for good reason. She is the most mainstream, with endorsement deals ranging from Nike, Panasonic, AT&T, McDonalds, P&G, Mondelez Int'l and Coca-Cola. She was on one of three covers of the 2019 Sports Illustrated Swimsuit Issue, the other two being models Tyra Banks and Camille Kostek. Needless to say, she will be a huge star in this upcoming Olympics, and the value of her cards should see a nice bump because of it.

This particular card came as a part of the 2011 Upper Deck MLS set, which mixed in women's soccer stars. There are 220 of these cards graded by PSA with (157) of them receiving a PSA 10. With such a low number of the face of the team's rookie card, this could be an absolute steal. If you want to gamble, you can buy the card raw and send it off to be graded, or even get a box of the sealed wax and have some fun ripping open the packs! 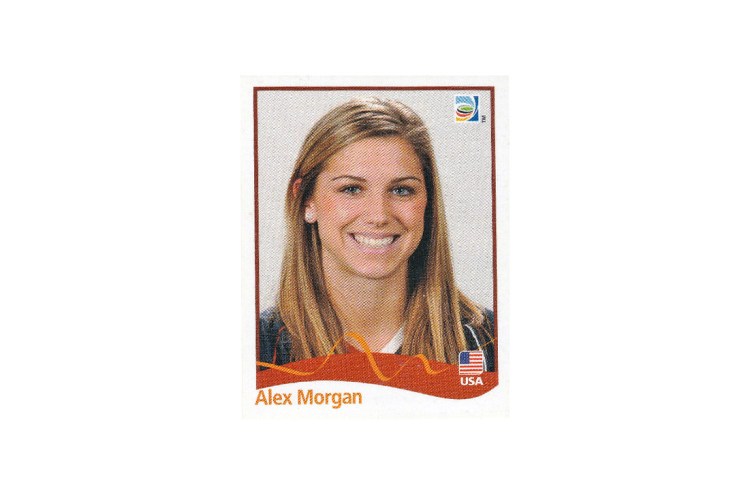 This set is absolutely fascinating. Panini has been printing soccer stickers for over 50 years, but this 2011 World Cup set was the first time they ever produced Women's World Cup soccer stickers. Operating under the assumption that there would be little interest in the product, they only released it in the host country of Germany in small quantities.

Because of the rarity of this set, there are only 10 graded examples (4) PSA 10s and (4) PSA 9s of Alex Morgan's true rookie sticker. Finding a sealed box (or packs) is near impossible, and while raw examples do pop up on eBay, they typically come from Europe.

One of the PSA 9s recently sold for $800, and I can't stress enough how good I feel about the idea of getting these stickers any time they come up for sale, especially if you can grade them in time for the Olympics. This is my favorite play on this list, considering the rarity and cost-of-entry, and you will be seeing it again on this list shortly! 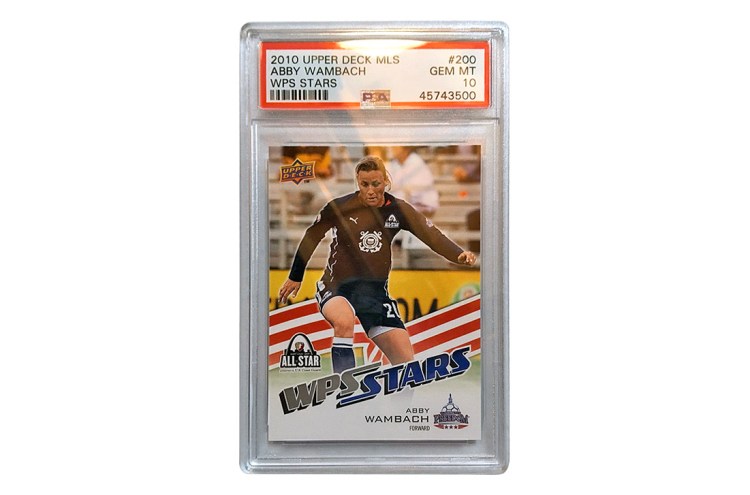 Only seven of these cards have ever been graded with six of them receiving a PSA 10, so this is another card that won't be easy to find. Wambach ranks as the highest all-time goal scorer as a forward for the USWNT, so much like Mia Hamm, we will likely be seeing and hearing a lot about her dominance on the pitch in the coming months. 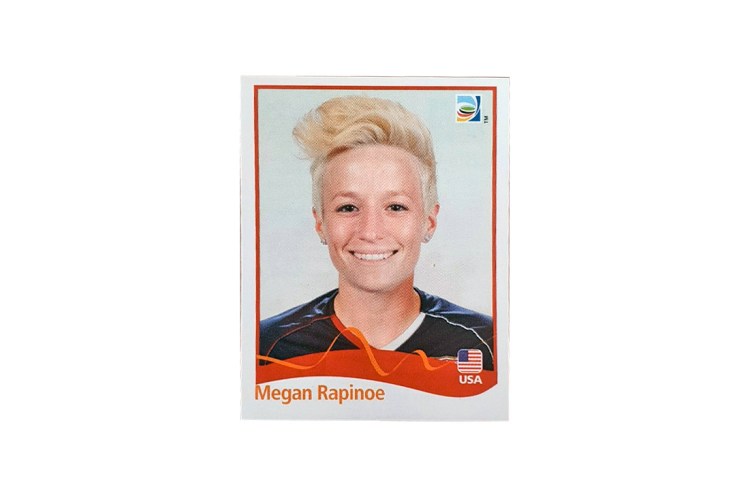 As the USWNT's outspoken leader, you can be sure that you will be seeing a lot of Megan Rapinoe in the mainstream media, not just because of her fantastic play on the pitch, but also because of her ongoing battle for equal pay.

In a recent trip to the White House, Rapinoe (while on stage with President Biden) declared, "I have been devalued, I’ve been disrespected and dismissed because I am a woman,” going on to say, "Despite all of the wins, I am still paid less than men who do the same job that I do. For each trophy— of which there are many—for each win, each tie and for each time that we play, it’s less.”

This will certainly be a storyline throughout the Olympics. If Rapinoe can help the USWNT recapture the gold, the focus of the world will be on her. I already spoke about the rarity of these 2011 Panini World Cup stickers, but that set also includes Rapinoe's rookie sticker with a PSA 10 population of just two and only (7) PSA 9s backing it up.

There are a few of these available raw on eBay but you better move fast if you want one. 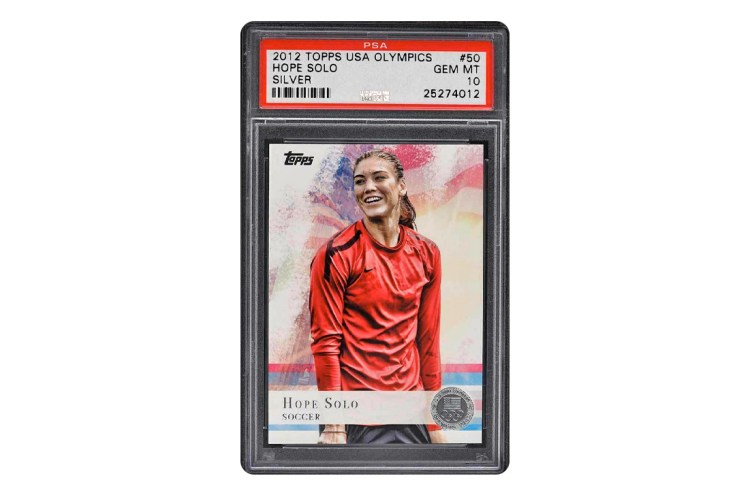 How often did we hear about Hope Solo's post-game comments about the Swedish National Team after the 2016 loss? Will Sweden use it as motivation to prove that 2016 was no fluke? Will the USWNT prove that Solo was correct in her assertion that the "better team lost" on that day?

Either way, Solo is considered one of the greatest goaltenders of all-time, with two gold medals, a World Cup and was named U.S. Female Athlete of the Year in 2009. It doesn't necessarily have to be this particular card, there are some really cool Hope Solo numbered autos on eBay, and she is also in the 2011 Panini World Cup sticker set that I love so much. 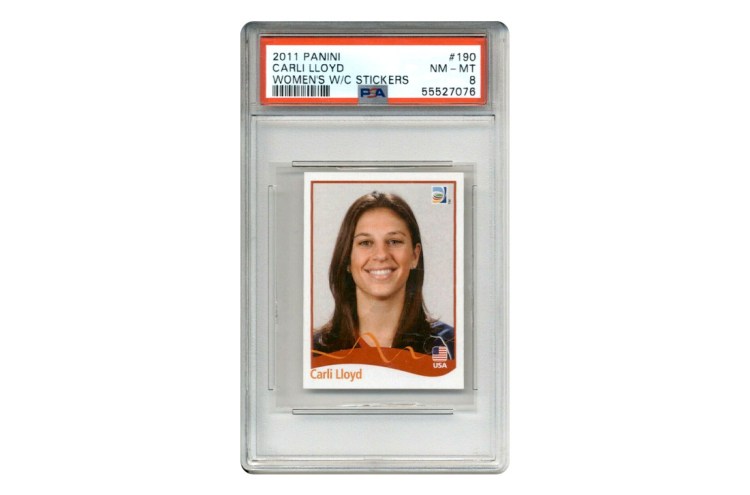 Lloyd will be suiting back up for the USWNT in the Olympics at 38 years-old and is most well-known for scoring a hat-trick in the 2015 FIFA Women's World Cup Final against Japan, the first woman to ever pull off that feat in a final game.

You can pretty much copy everything I keep saying about this 2011 Panini World Cup sticker set and paste it in here. In order to avoid being redundant, I will also point out that Carli Lloyd has some other rare and fun cards on eBay. I especially like the 2019-20 Panini Gold Standard cards of hers, as well as the 2019-20 Panini Obsidians. 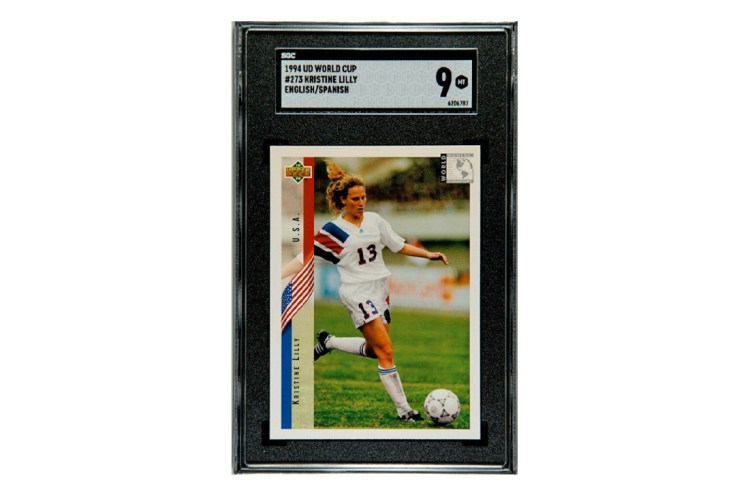 Her rookie card can be found in the same 1994 Upper Deck World Cup set as the Mia Hamm rookie, presenting nice consolation prize potential to somebody who buys a few packs searching for the Mia Hamm card. 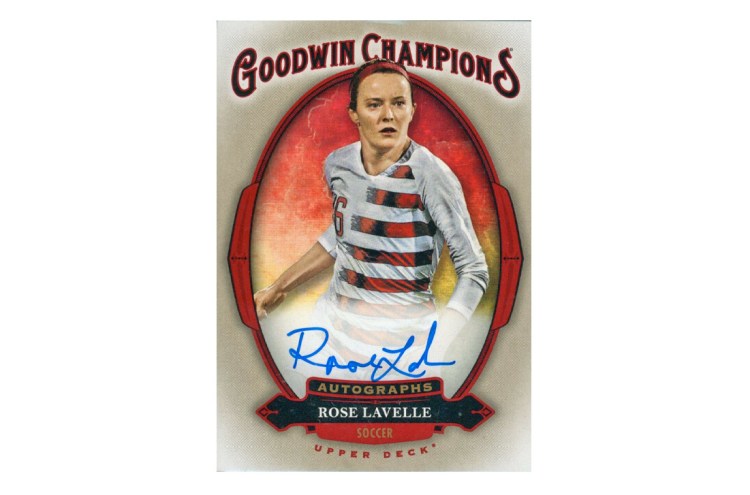 At just 25 years-old, Rose Lavelle is one of the up-and-coming stars on this year's Olympic squad. This is her first Olympics with the USWNT, but she played on the 2018 CONCACAF Women's Championship, the qualifying tournament for the 2019 World Cup, scoring three goals in five games and helping the team to their second straight CONCACAF championship.

She started all six games in the 2019 World Cup in France, scoring three goals and was awarded the Bronze Ball as the third best player in the tournament.

I like this 2020 Upper Deck Goodwin Champions card because it has beautiful eye-appeal, and she doesn't have many autos out there currently. I also love her 2019 Panini World Cup stickers, especially due to the cost-of-entry on some raw ones.

There is a very good chance that Lavelle becomes the new face of the USWNT, and if she does, what do you think will happen to the value of her cards? I'm a buyer on all things Rose Lavelle.

Others to Look Out For 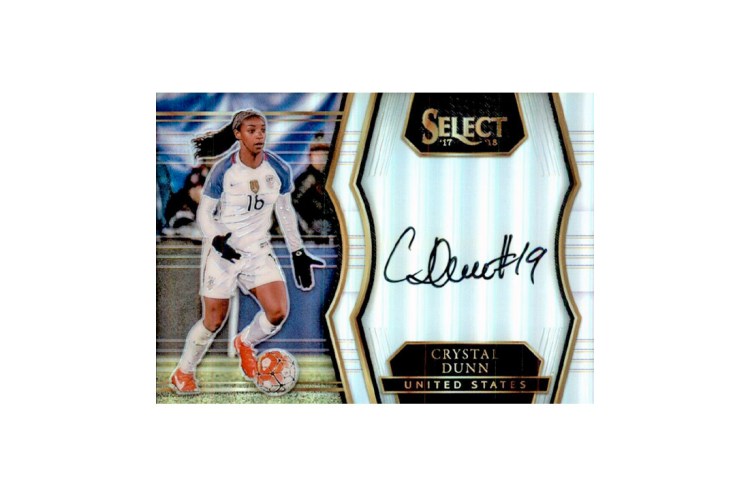 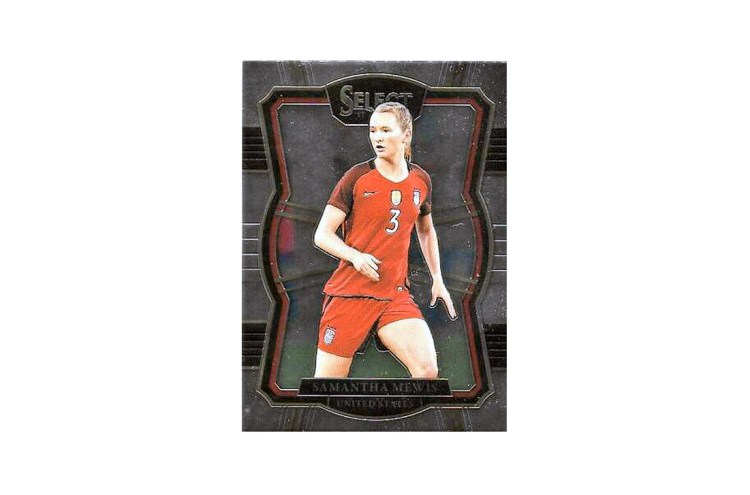