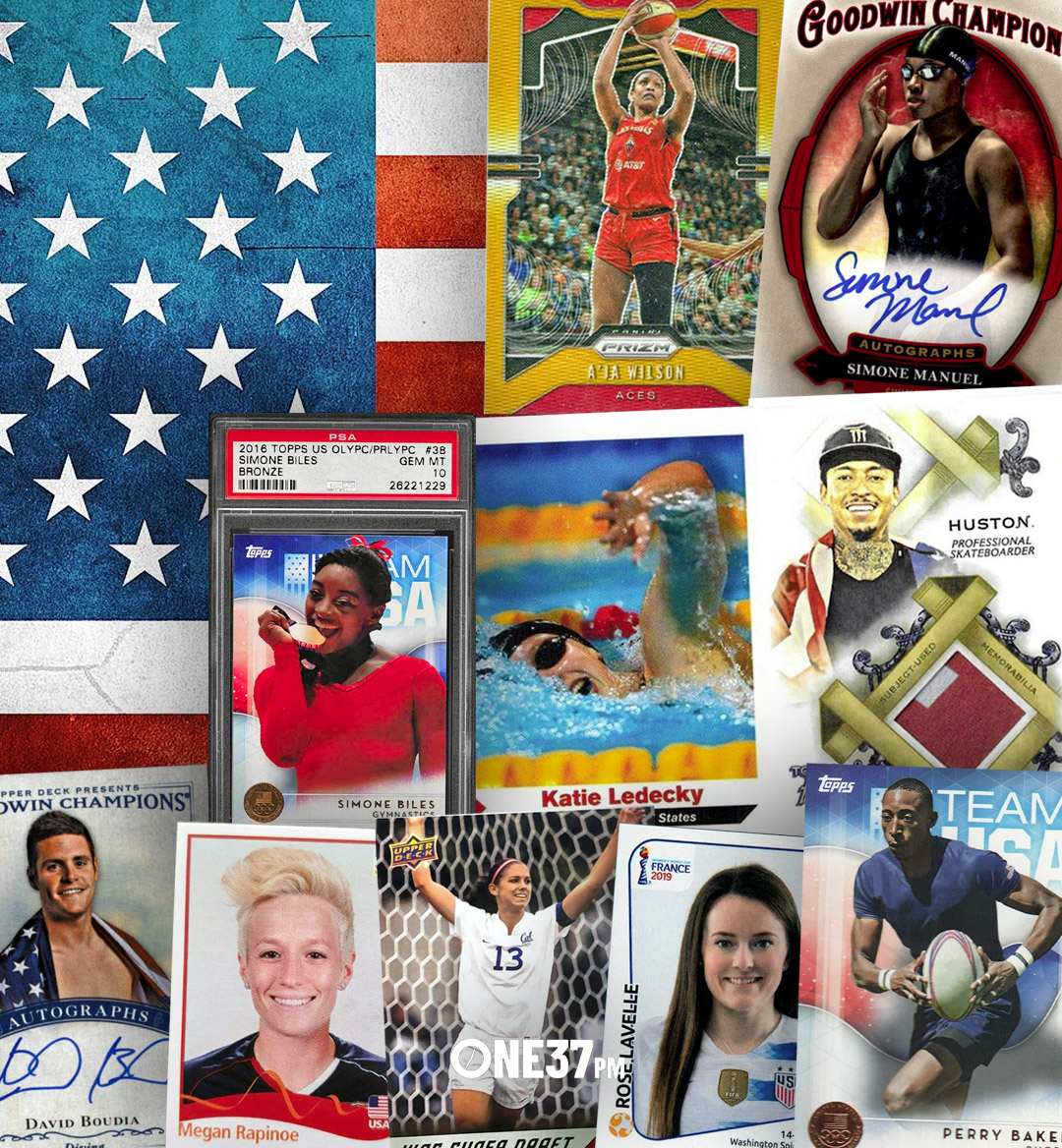 Every two years, some interesting buying opportunities arise in the card market centered around the Olympics. For a few weeks during the Summer and Winter Games, individual athletes take center stage the world over and become household names in their countries from sports that typically don't get much attention in the hobby.

Because of the low supply of cards for most of these athletes, combined with relatively low cost of entry on most of their cards, you can do very well by prospecting which athletes are poised for greatness in the upcoming Tokyo 2021 Summer Olympics.

The list below breaks down my top 10 athletes representing the United States in Tokyo, their story lines, and some of their best cards to look out for. 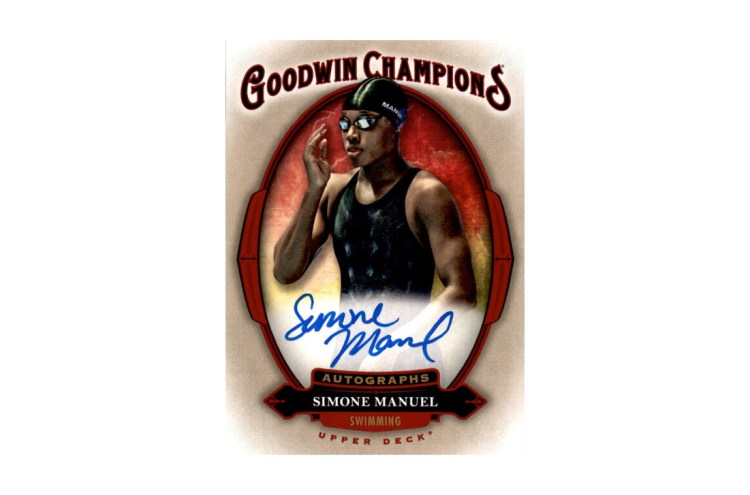 Simone Manuel is a two-time Olympic gold medal winner and the first African-American woman to win an Olympic gold in an individual swimming event. She is also the two-time defending world champion in the 100-meter freestyle, and won a combined eight titles in the 2017 and 2019 World Championships. The pre-Olympics buzz centers around her chase for a potential six gold medals in Tokyo, which would be the most ever won by a female from the U.S. at any single Olympics. If she pulls it off, she'll be a household name.

Manuel actually has quite a few different cards out there, including the 2018 Sports Illustrated for Kids and 2018 Sportkings, but my favorite cards are the autographed 2020 Goodwin Champions (pictured above). If you're lucky, you might even find one of the 25 cards on which she hand numbered and inscribed “2x Gold Medalist” below her name. 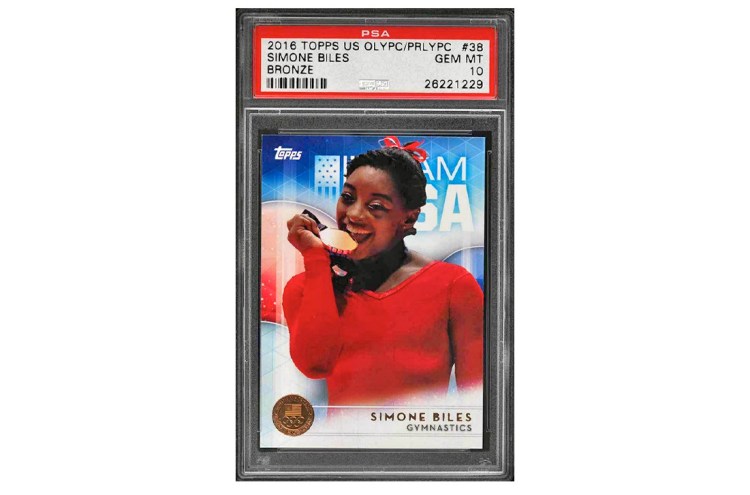 Simone Biles is already a household name and would likely be number one on my list, if not for the fact that her cards are already doing some big numbers. She currently has a combined 30 Olympic and World Championship medals—the most ever for an American gymnast and third most all-time behind Vitaly Scherbo (33) of Belarus and Larisa Latynina (32) of Russia.

Biles, like Simone Manuel, could surpass five gold medals in Tokyo and break the record, which will make for quite a fun few weeks in the national media. Her 2014 Sports Illustrated for Kids PSA 9 recently sold for $1,800 and she also has popular 2016 Topps USA Olympics base, parallel and auto cards that are pretty easy to find. 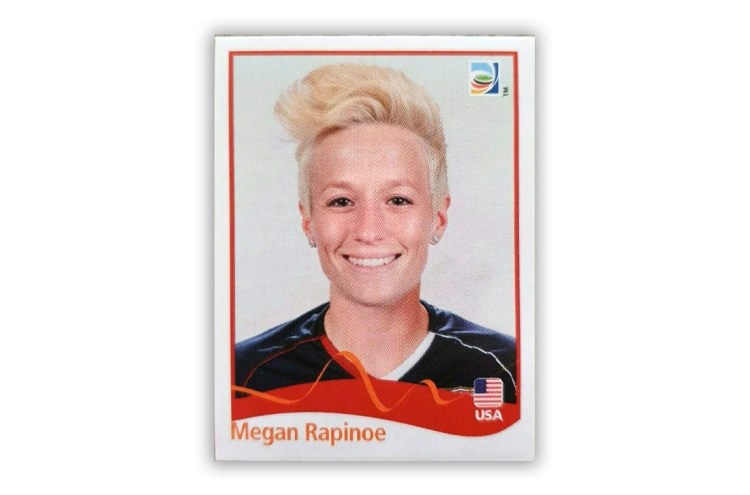 I recently wrote an article about the USWNT cards to look out for, and Megan Rapinoe is at the top of the list. She's been the public face of the team's demand for equal pay and subsequent lawsuit against U.S. Soccer and recently took the fight to the White House. “I have been devalued, I’ve been disrespected and dismissed because I am a woman," she said. "Despite all of the wins, I am still paid less than men who do the same job that I do. For each trophy—of which there are many—for each win, each tie and for each time that we play, it’s less.”

This will surely be a major story throughout the Olympics, and with the USWNT among the favorites to win the gold medal, you'll be seeing a lot of Rapinoe in the mainstream media.

She has a ton of cards available, but my favorite is the super-rare 2011 Panini World Cup sticker that was only produced in Germany in small quantities. That set features the rookie stickers of both Rapinoe and Alex Morgan, and due to its low supply, it’s one of my favorite buys in quite a while. 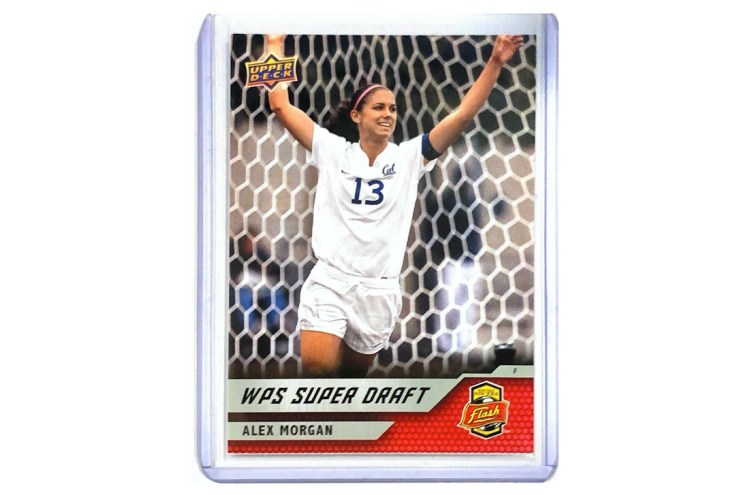 You can basically copy and paste everything I said about Rapinoe and fill it in for Alex Morgan as well. These two have been stars of the USWNT for almost a decade, and if they go on a gold medal run in Tokyo, they'll be everywhere in the media.

I obviously love that 2011 Panini World Cup sticker set, but Morgan also has a rookie card in the 2011 Upper Deck MLS set that does some big numbers, with a PSA 10 recently selling for $722. She also has a 2012 Topps USA card that recently sold for $389 and some beautiful autos and game-worn jersey patch cards all over eBay. 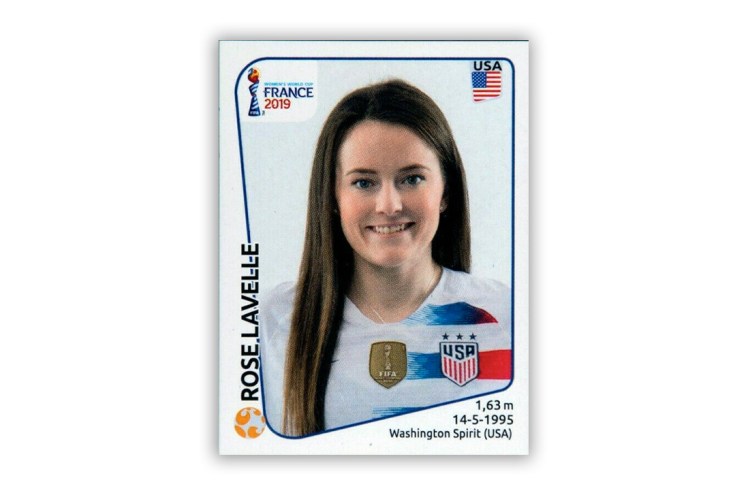 While Alex Morgan and Megan Rapinoe have been the face of women’s soccer in the United States, it’s likely that Rose Lavelle is the future of the USWNT.

Lavelle had a huge 2019 World Cup, scoring three goals and winning the Bronze Ball, given to the third best player in the entire tournament. If she can take the next step in Tokyo at just 25 years old, the endorsements will come rolling in. As I always say, relevance is the most important thing in modern trading cards. Lavelle will be relevant for years to come.

Her 2019 Panini World Cup sticker is quite a play, especially considering you can snag them on eBay for around $20. She also has some beautiful cards in the 2020-21 Panini Obsidian set, with this Electric Etch Green parallel selling raw for $672! (I guess I’m not the only one fired up about Lavelle cards!) 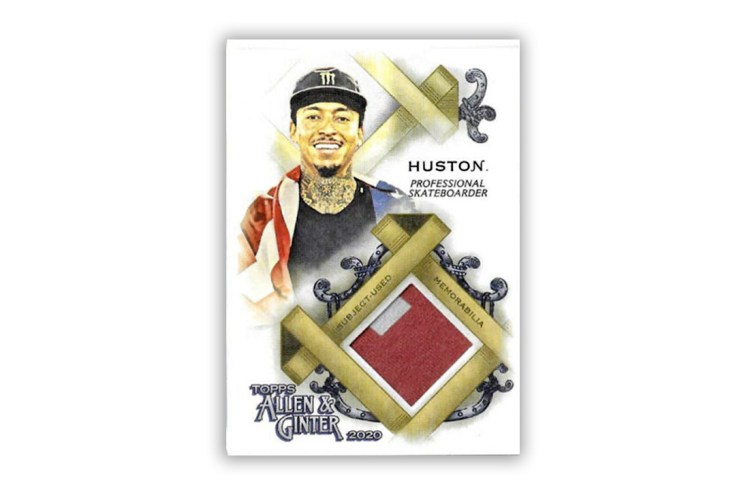 This is the first year that street skateboarding is an Olympic sport and Nyjah Huston is the top competitive skateboarder on the planet. He already has millions of followers on social media, is a YouTube star, and appeared in the HBO series Ballers. When you combine those factors with the relatively low population and availability of his cards, this has all the makings of a BIG play.

Before you scoff at the idea of investing in a skateboarder, take a look at the numbers that some Tony Hawk cards sell for.

Huston's only cards I can find come from the 2020 Topps Allen & Ginter set, and there are all kinds of refractors, patches and autos to choose from. 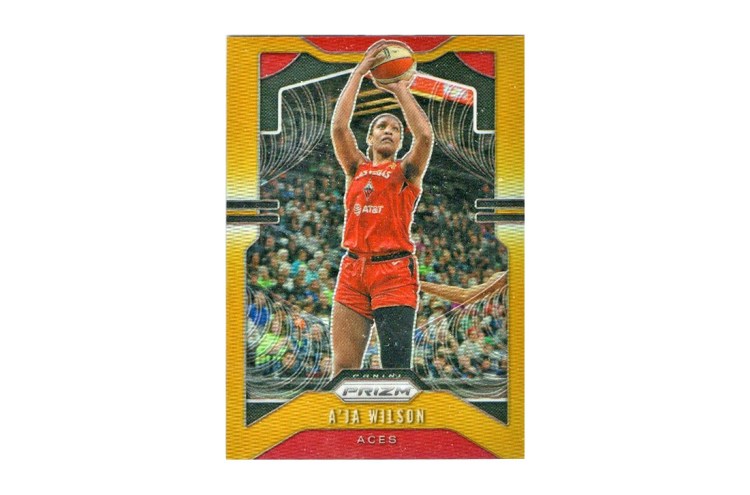 A’ja Wilson was selected first overall in the 2018 WNBA Draft by the Las Vegas Aces and has certainly not disappointed. The 2017 NCAA Tournament Most Outstanding Player, 2018 WNBA Rookie of the Year and 2020 WNBA MVP is now poised to shine in her first-ever Olympic Games.

Panini just began making WNBA Prizm cards in 2020, and there are quite a few of her cards available on eBay, with a gold parallel recently selling for $220. Her actual rookie was in the 2018 WNBA Rittenhouse set, and there are all kinds of base cards and autos out there from that set that look very interesting. 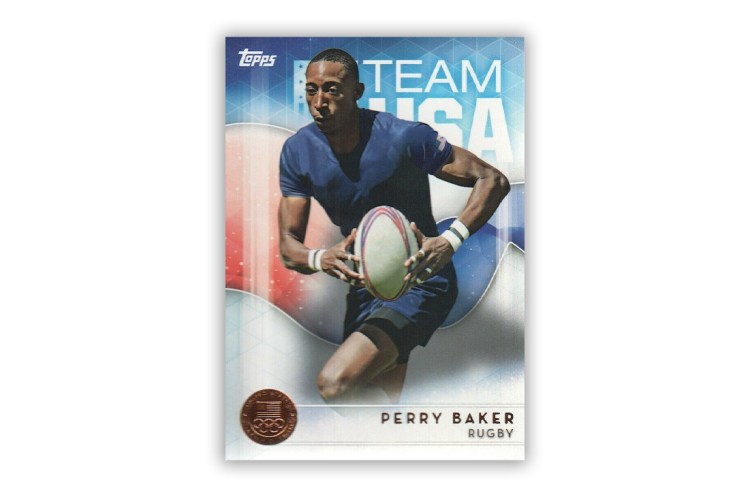 Perry Baker is an absolute star in Rugby and considered one of the best players in the world. He only started playing the sport after a brief professional football career during which he failed a physical for the Philadelphia Eagles (2011) due to a knee injury, and spent two years in the Arena League playing wide receiver for the Pittsburgh Power (2012-13).

I think rugby could be one of those sports, like curling in the Winter Olympics, that could get some views from mainstream sports fans who wouldn’t typically watch it any other time. I love Baker’s story, and have a feeling many others will too.

He doesn’t have many cards out there, but the 2016 Topps U.S. Olympics Team set contains his rookie card. It isn’t easy to find, but there are a few on eBay and for 99 cents, how can you go wrong? 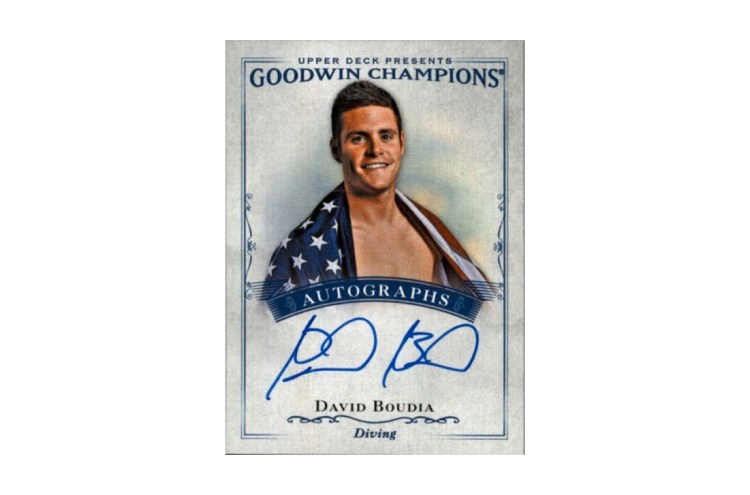 Boudia is a four-time medalist, winning the gold in the 10-meter platform during the 2012 Summer Olympics. He suffered a concussion in 2018 after a training error led him to crash his head and stomach into the water. Afterwards, he switched events to the three-meter springboard and is poised to match Greg Louganis for the most medals in United States diving history with just one more in Tokyo.

Who doesn't love a good comeback story? Boudia has quite a few cards on eBay under $20, including some autos and patches that could make for a good play if he has a successful showing in Tokyo. 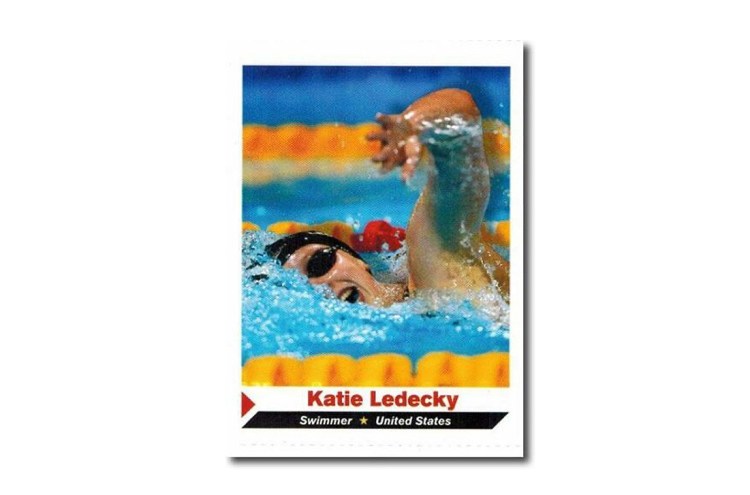 Ledecky has five gold medals to her name, winning one at the age of 15 in 2012, and four in the 2016 Olympics. She joins both Simone Biles and Simone Manuel in the chase for five gold medals in Tokyo, and the only reason she isn’t higher on this list is because the only cards that seem to be out there come from Sports Illustrated for Kids.

These are just so difficult to grade, so I'm not typically a fan of buying them raw. However, she is an absolute star and if you can get a good deal on a graded one, it might pay some dividends.