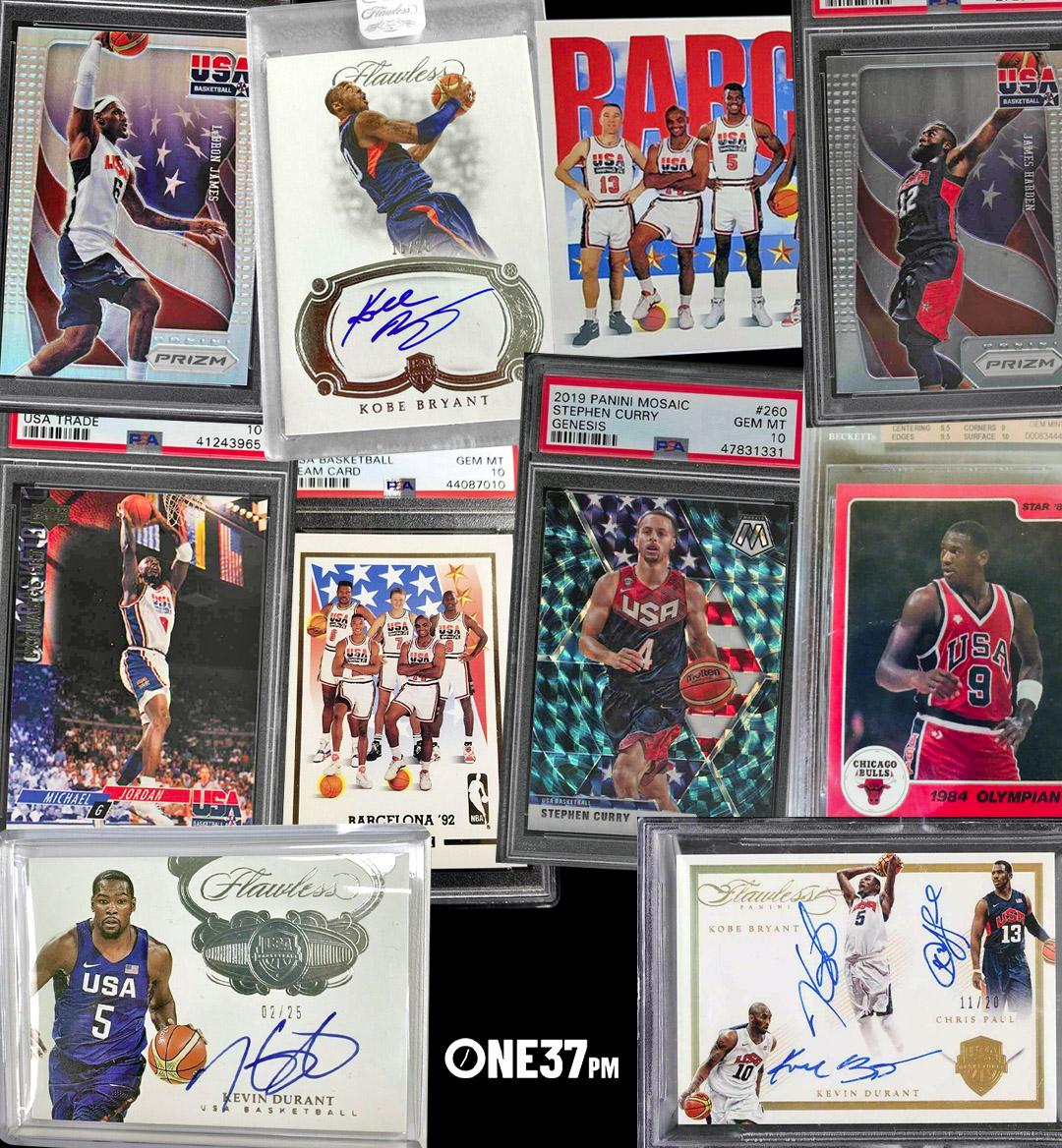 Baseball might be known as "America's pastime," but basketball is truly the sport the U.S. dominates in international play. The United States men's basketball team has won medals in all 18 Olympics that they've competed in, taking home 15 golds.

In 1988, our final "amateur" team—which featured future NBA players Dan Majerle, Stacey Augmon, Danny Manning, J.R. Reid, Mitch Richmond, Charles Smith and David Robinson—shockingly lost to Russia in the semifinals and wound up winning the bronze medal, the worst finish ever for the U.S. team in International play at the time.

In April of 1989, the International Basketball Federation (FIBA) amended the rules stating that NBA players were not allowed to play in the Olympics, giving way to the 1992 "Dream Team" that featured 11 eventual Hall of Famers including Michael Jordan, Larry Bird, Magic Johnson, Karl Malone, David Robinson, Charles Barkley and Patrick Ewing.

That squad, thought of as the greatest sports team ever assembled, famously dominated their opponents by an average of 44 points en route to winning the gold medal against Croatia.

The 1996 and 2000 teams also won the gold. But after disappointing showings in the 2002 World Championships (6th place) and the 2004 Olympics (bronze medal), stars such as Kobe Bryant, Dwyane Wade, LeBron James and Carmelo Anthony announced their commitment to play in the 2006 World Championships and the 2008 Olympics, where they would be nicknamed the "Redeem Team." In Beijing, they went 8-0 and brought the gold medal back to the United States, beating Spain 118-107 in the final game.

The 2012 and 2016 teams also captured the gold, sending the 2021 squad to the upcoming Tokyo Olympics as winners of six of the last seven games. Will they again step up on the international stage and make it seven out of eight? They are strong favorites, currently sitting at -305 to win the gold at Draft Kings, with Serbia and Spain their closest competition both at +800.

Trading cards and collectibles that feature these gold medal teams remain extremely popular in the hobby. With the upcoming Tokyo Olympics set to kick off in late July, will memories and nostalgia drive prices up? That remains to be seen. However, while these stars typically play for a team that represents just one city, every four years for just a few weeks, the entire country roots for them. As you'll see from the list below, there are some really cool USA Basketball cards out there that can be found on eBay if you're feeling patriotic! 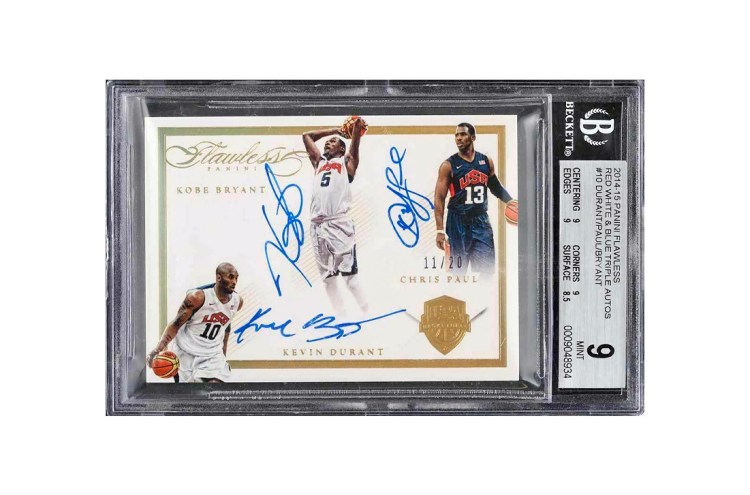 This card features one Hall of Famer (Kobe) and two players who are sure to be inducted once their storied careers come to an end. To have all three of their autographs on the same card is extremely unique. In fact, only 20 of them were produced.

One thing I do find a bit strange about this card is that Kobe signed his name above Kevin Durant's text, while Durant signed his name by Kobe's text. However, with a $14,400 sold listing attached to it, it doesn't appear the buyer was too concerned about that quirk. 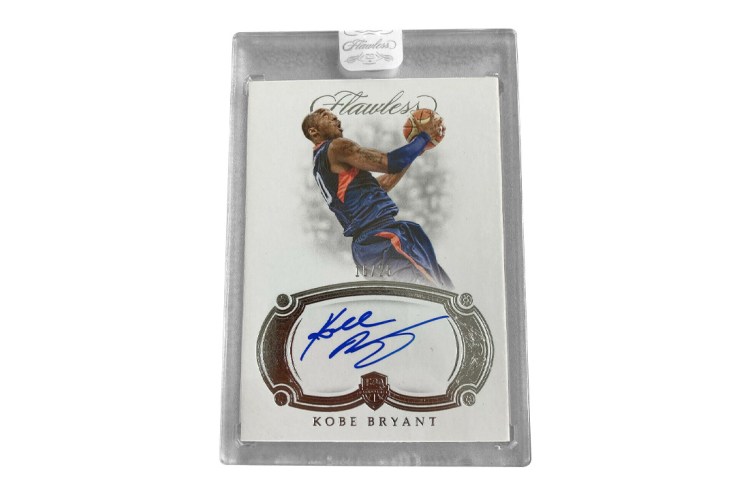 This card is absolutely gorgeous, featuring Kobe going up for a reverse jam. Numbered to just 25, it's no surprise that it sold for $8,888 (a nice touch by the buyer with all of those jersey #8's).

Flawless is one of the most high-end, well-designed products that Panini produces. They knocked this one out of the park. 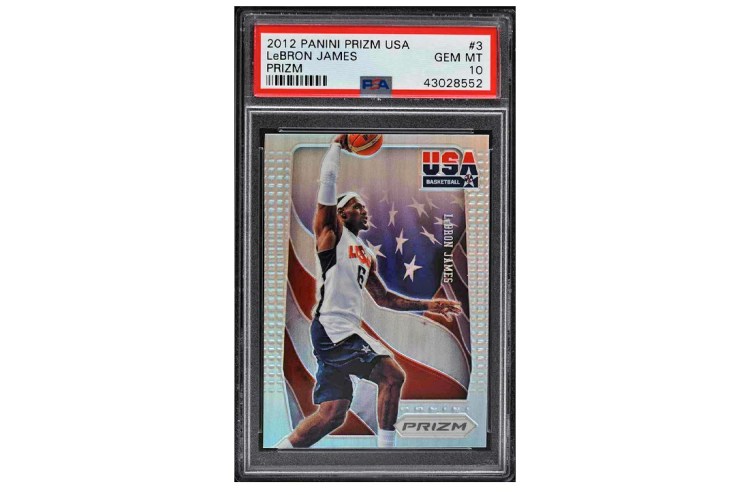 2012 was the first year that Panini Prizm basketball was produced, and they honored the gold medal-winning 2012 USA Basketball team with a special insert in the set. There are also silver, green (retail) and gold (#/10) Prizm parallels of these cards.

This particular LeBron James card is a PSA 10 Silver Prizm with a population of just (6). 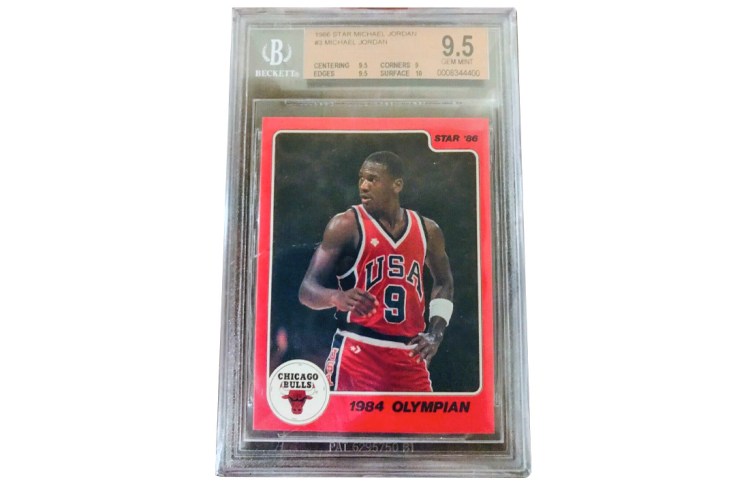 The Star Company is most known for its 1984-85 set that featured the first NBA-licensed cards of Michael Jordan, pre-dating the iconic 1986 Fleer set.

You won't find Star cards that are graded by PSA, as only Beckett will authenticate and grade them. The 1985-86 set that this particular card came from was Star's final set and was short printed, making this "1984 Olympian" card extremely rare with just (167) BGS 9's, (119) 9.5's and no 10's in the population. 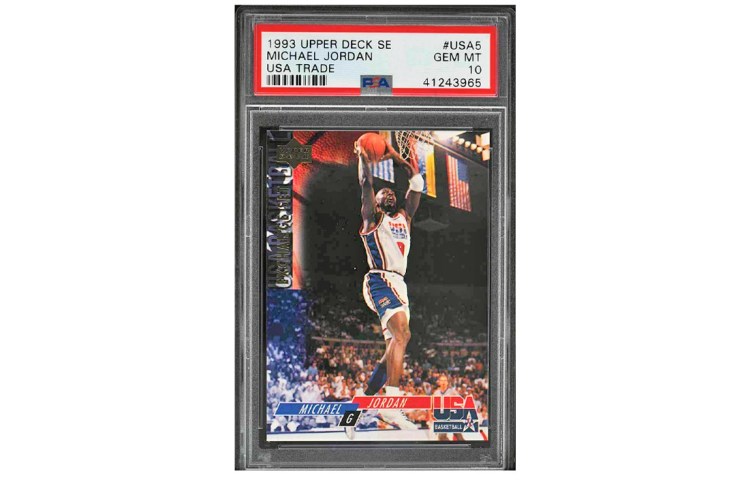 This 24-card set was only available by exchanging an Upper Deck SE USA Trade Card which was randomly inserted in one out of every 360 packs. This set was a preview of the upcoming 1994 Upper Deck set that featured the players selected to play on "Dream Team II" as well as 11 players from the original "Dream Team." 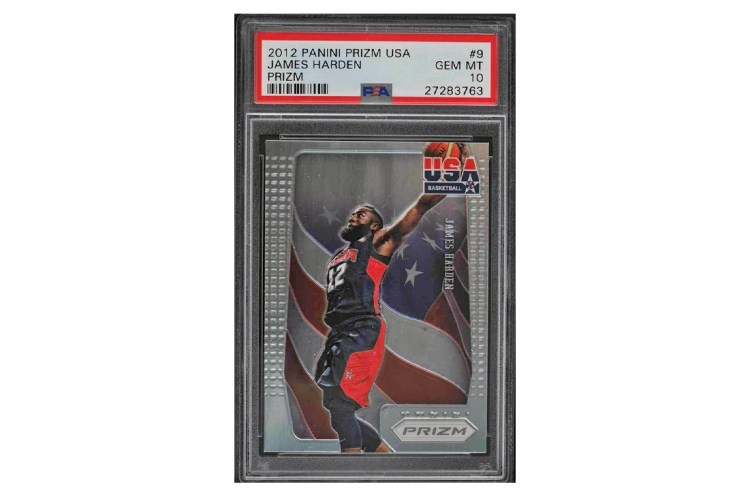 Harden received one of the two final roster spots on the 2012 gold medal-winning team along with Blake Griffin (who was later replaced by Anthony Davis after injuring his knee). He didn't play a significant role, however, averaging just 5.5 points per game in London.

Like the aforementioned LeBron James 2012 Prizm USA card, this James Harden silver Prizm parallel PSA 10 is extremely rare, with a population of just (5). While the $898 price tag is steep, if you like this card you can find raw (ungraded) copies for about $40. 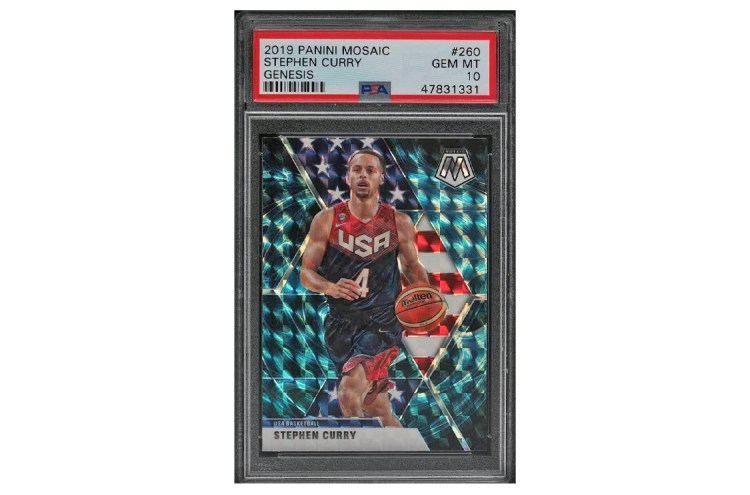 What's interesting and unique about this card is that Stephen Curry never actually played for the United States in the Olympics. However, he did win gold medals with USA Basketball in the 2014 FIBA World Cup, 2010 FIBA World Championship and 2007 Global Games and is a finalist to compete in the Olympics this year. He had to withdraw from the 2016 games in Brazil because of injury concerns.

The PSA 10 population on this card is just (30), and with Curry's popularity combined with the rarity and beauty of this Genesis parallel, I think this card has plenty of upside. 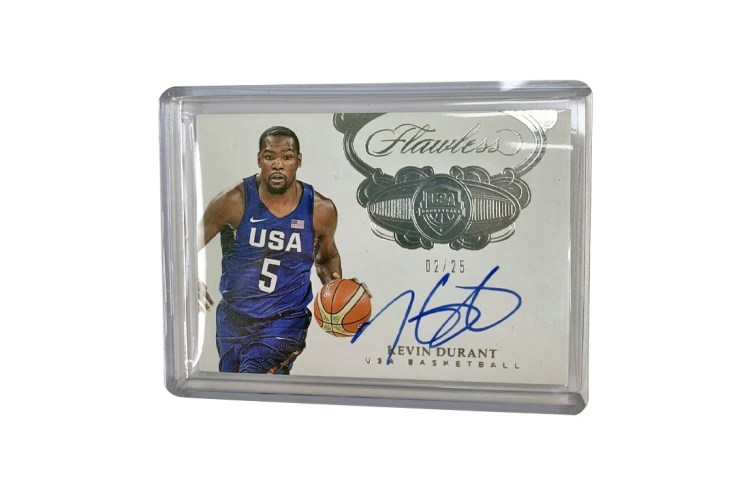 This card features an on-card auto and is numbered to just 25, but Durant's market is currently free-falling. While that's not a good thing if you already hold his cards, it presents an interesting buy-low opportunity if you're looking to pick one up! 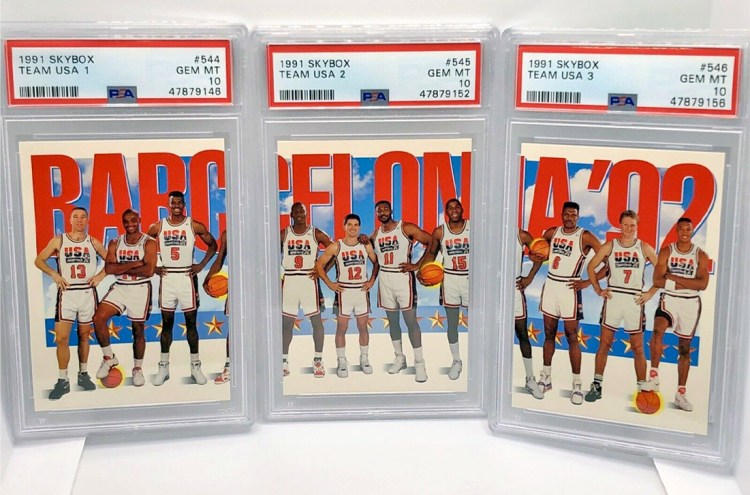 I was 12 years old when this set came out, and at the peak of my card-collecting days. I remember how cool I thought it was that you had to assemble a "poster" out of three separate cards that I was chasing in packs. I had the left one and right one thumbtacked to my wall, and ripped what seemed to be an endless number of packs before finally landing the middle piece to the puzzle.

Thirty years later, the thought of picking up all three of these cards slabbed as PSA 10's seems really cool. It won't be easy to pull off, as the populations on these cards are low, especially the left side (#544) with Chris Mullin, Charles Barkley and David Robinson—there are only (175) of them. I wish I saw this listing sooner! 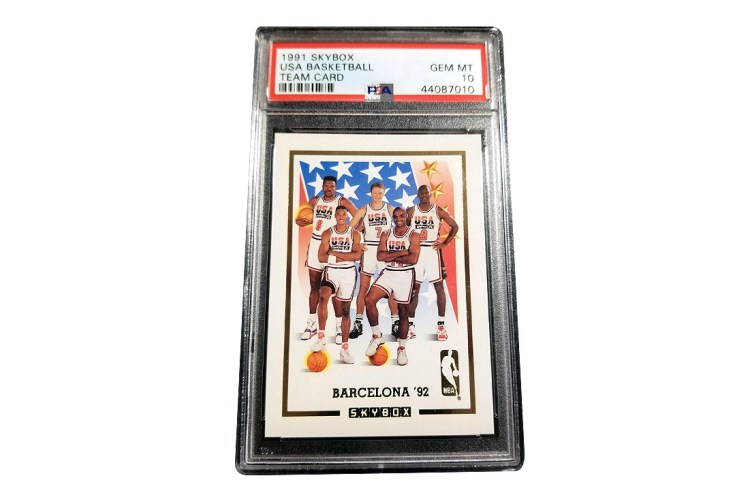 This is another piece of "Dream Team" history, with just (49) of these graded as PSA 10's in the population. It features Michael Jordan, Larry Bird, Charles Barkley, Scottie Pippen and Patrick Ewing on the front and Magic Johnson, John Stockton, Chris Mullin, Karl Malone and David Robinson on the back.

The gold foil border and flag in the background really makes this card pop. With all of those Hall of Famers on one card, and with a population that low, how could you go wrong?