The 10 Best Spider-Man Games of All Time 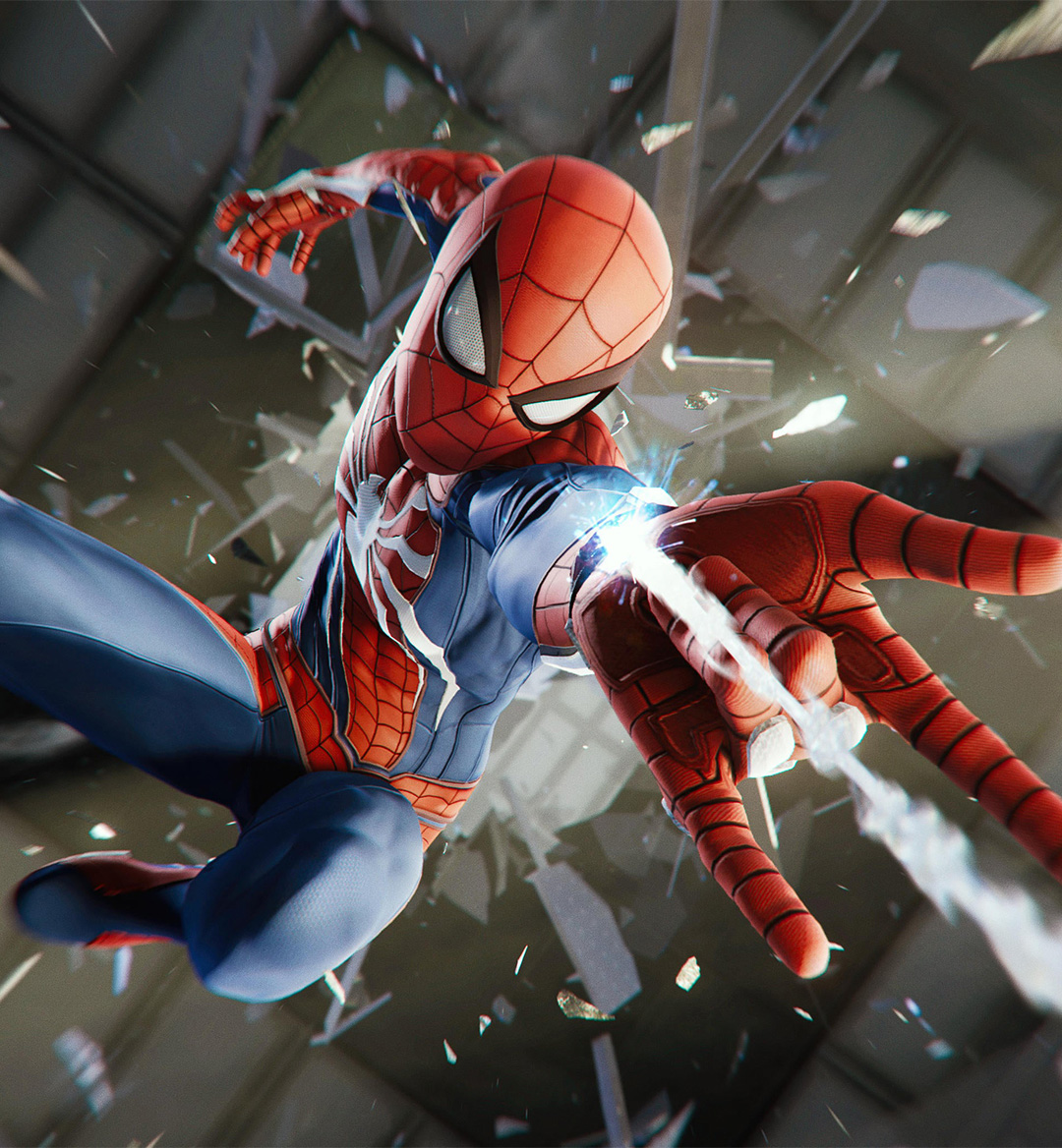 We're guessing the license holders for the world's most famous wall-crawler uttered that line to every video game publisher/developer that was given the right to utilize him. Notable names, such as Sega, Activision, and Sony Interactive Entertainment, were all tasked with giving one of its talented development teams the tough task of creating an "amazing" video game adaptation that encapsulated everything people love about Spidey. Your friendly neighborhood Spider-Man has been featured in everything from arcade beat 'em ups and top-down action RPGs to legendary open-world adventures.

And through it all, Spider-Man has had his fair share of memorable games that still stand tall when compared to the finest comic book video games of all time. The 10 games we're about to wax nostalgia for are the most preferred way to take control of the lovable web-slinger and act out his most heroic feats in playable form.

If a franchise was hotter than fish grease back in the day, chances are it was given a video game adaptation of some kind. And seeing that video game adaptation implement side-scrolling beat 'em up mechanics was usually a given. Sega did just that once it got to play around with Marvel Comics' avenging web crawler. This arcade beat 'em up was simple and straight to the point - get you and three buddies together to choose from Spider-Man, Black Cat, Namor the Sub-Mariner, and Hawkeye.

Then proceed to smash a bunch of evildoers on your way to clashing with bigger baddies, such as Kingpin, Venom, and even Doctor Doom. The game's visuals were quite striking at the time as it presented each character as bold and tall heroes that elicited comic book sound effects from their foes every time they hit 'em. Spider-Man: The Arcade Game is another classic Marvel beat 'em up that we still can't get enough of.

That red SNES cartridge blew everyone's minds at first sight. It still wows us every time we spot a random image of it on eBay or some retro gamer forum. That color change went hand in hand with the vicious villain at the heart of the struggle in Spider-Man and Venom: Maximum Carnage. The comic book series itself made a huge impact and so did the game based on Carnage's coming out party across the pages of his story arc.

Maximum Carnage is another one of those 16-bit beat 'em ups that always gets mentioned among Marvel's best video games. Those who played it look back fondly on Spider-Man and Venom's crusade through NYC as they vanquished a whole army of thugs. The coolest part of this game is the way in which superhero assists could be called on - by finding specific items, allies such as Captain America, Black Cat, and Iron Fist would pop in to lend a hand. This game kicked our asses plenty of times, but we could never put it down. Someday we're finally gonna get to the end and put Carnage down for good!

Fun fact - this Activision-published Spider-Man game actually relied on Tony Hawk's Pro Skater game engine for the PlayStation. At the time of its release, many regarded it as the best Spider-Man game ever made. While it may not hold that high honor anymore, this 3D foray into the dangerous world of Spider-Man still deserves plenty of praise.

While the icon Stan Lee narrated, players took control of Spidey as he fought to clear his name after being framed by a doppelgänger. And on top of all that, players also had to combat an incoming symbiote invasion. Webbing around this game was such a joy, plus webbing up foes and getting into some wild boss fights with familiar members of Spidey's Rogue's Gallery was equally engrossing. Clashing with a giant-sized Mysterio will always stick out in our minds regarding this awesome Spidey simulator. We gotta hand extra props to the Sega Dreamcast version, by the way!

All praises are due to Activision for packaging this slept-on Game Boy Advance Spidey game with X2: Wolverine's Revenge. For someone that owned a GBA, it was actually worth getting your hands on this game since it was way better than most licensed portable video games at the time.

Spider-Man: Mysterio's Menace was a pretty straightforward side-scroller, but it performed its job quite well. You navigated numerous stages, webbed up & knocked out random bad guys, and met a recognizable supervillain at the end. It didn't get any more complex than that, but we were fine with that! Throwing hands with the likes of Hammerhead, Rhino, and even the often ignored Big Wheel played the part of final bosses during their associated stages. Spider-Man's best handheld adventure is most definitely this one.

Tobey Maguire is still held up as the best onscreen interpretation of Peter Parker/Spider-Man by a good majority of comic book movie fans. Seeing as how crowded theaters full of those same fans lost their minds when he appeared onscreen in Spider-Man: No Way Home, it's easy to see that Tobey's Spidey still gets a ton of love.

The video game adaptation of Tobey's 2002 blockbuster adventure is a damn good time. The open environments gave way to some solid web-slinging segments and brawls with various assailants that made us truly feel like the hero himself. The visuals really shined here and shone brightly, especially when you got to swing around the city under the guise of some dope alternate costumes (those Matrix Spidey and Shocker skins were our faves!). We gotta give Treyarch plenty of love for doing right by Spider-Man with this game and its astonishing follow-up!

The follow-up to the original Spider-Man movie game is a massive improvement in every way, shape, and form. This sequel threw players into a truly open world that allowed Spidey to glide through the air in a beautiful rendition of the "Big Apple."

Spider-Man 2 gave everyone so much to do as the hero everyone in the big city relied on - you saved countless kids' balloons, stopped plenty of speedy cars, rescued numerous construction workers while they're falling to their death, etc. And alongside all that was Spider-Man's conflict with Doctor Octopus, which gave way to an intriguing storyline that everyone already adored from the movie itself. Spider-Man 2 is a goated comic book video game for another reason, by the way - it's narrated by the great Bruce Campbell!

The Ultimate Spider-Man comics presented one of Marvel's most iconic heroes in a new light during the imprint's storied run. And once Treyarch got the green light to make a game based on that spinoff universe, gamers got treated to something on par with Spider-Man 2 with the release of Ultimate Spider-Man.

The game's cel-shaded visuals still look amazing to this very day (it's awesome how games that stuck close to that animation style stand the test of time!). The main crux of the fun from this game came from being able to venture through Manhattan and parts of Queens as Spidey and his nemesis/ally Venom. In the case of Venom, his playstyle allowed for more destructive behavior that felt like a mix between Rampage and Grand Theft Auto. Ultimate Spider-Man is pretty much a prettier version of Spider-Man 2 that sticks closer to its comic-book roots.

Before Spider-Man: No Way Home took a trip into the multiverse of the famed web-slinger, Spider-Man: Shattered Dimensions did it in video game form. Beenox put forth a great game that not only featured the traditional "amazing" Spidey fans instantly recognize but also showcased Spider-Man Noir, Spider-Man 2099, and Ultimate Spider-Man.

With four different Spider-Men in tow, this game introduced four different playstyles that kept a full playthrough of the game fresh throughout. Spider-Man Noir stuck out as the most unique thanks to his stealthy segments, while Ultimate Spider-Man's bigger focus on chaotic combat added to the game's fun factor. We hope Sony and Insomniac Games revisits the concept of Shattered Dimensions with a video game adaption of Into the Spider-Verse someday!

When news came out about a PlayStation 4-exclusive Spider-Man game, everyone's hype levels went through the roof. And upon its official reveal at E3 2016, it was clear that this highly-anticipated release was in capable hands. Insomniac Games, which is the studio most known for its work on the Ratchet & Clank series, did a bang-up job with its open-world foray into Spider-Man's difficult trials as a citywide superhero.

Everything was on-point here - the web-swinging, combat mechanics, alternate costume lineup, side missions, etc. all came together to produce the greatest Spider-Man game of all time. If you played through this game to the point of getting the platinum trophy and experienced all of its DLC, then you certainly got your money's worth. Spider-Man for the PS4 encapsulates everything that makes him great and perfectly showcases his Rogues Gallery as one of the very best in the comics industry.

After the last game on this list threw Miles Morales into the mix, it was only a matter of time before the lightning-infused Spider-Man got his own playable experience. Once the PS5 hit the scene, Miles got just that via a short yet oh so sweet foray into his coming-of-age adventure. Shout out to Insomniac once again for their quality work on Marvel’s Spider-Man: Miles Morales.

Miles stood apart through his signature special abilities that made zipping through the air and putting down a whole set of baddies even more lively. And with his very own struggle to get engaged in while Peter Parker is away, Miles came into contact with some lethal villains and even one that's been close to him since childhood. And the mood was set just right by the proper representation of Afro Latino vibes in NYC and the original soundtrack. Miles Morales' solo endeavor is definitely on equal footing with Peter Parker's PS4 epic.