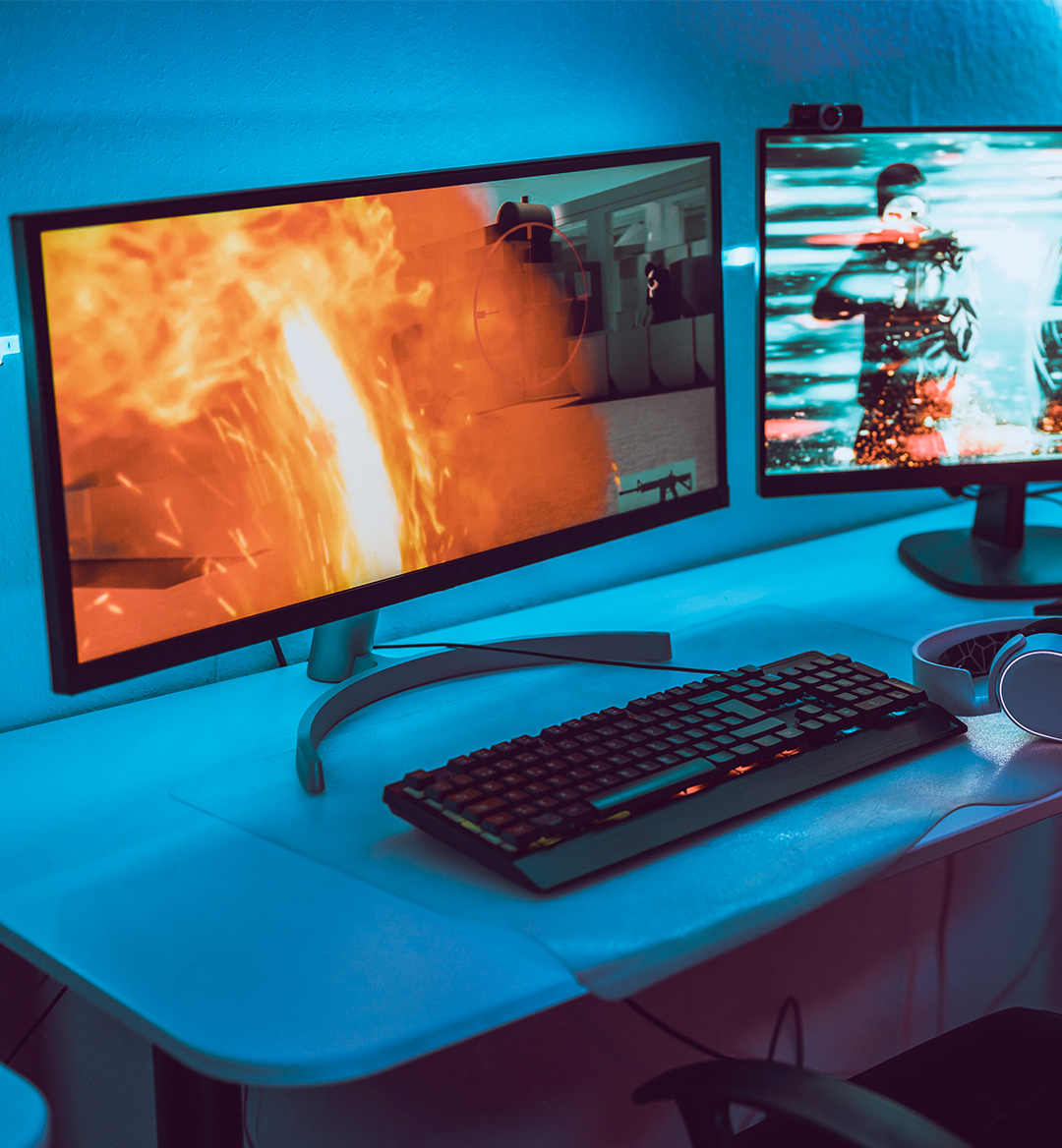 2020 marks the beginning of a generation of gaming consoles, which means new games taking advantage of the latest in cutting edge technology. It can be an expensive time for gamers, particularly those who prefer PC over console. Making sure your graphic cards and other parts can keep up with the demands of the current generation can get costly. Luckily, more frugal PC gamers have options when it comes to enjoying their favorite titles affordably, so we compiled the 11 best gaming PCs under $1,000. 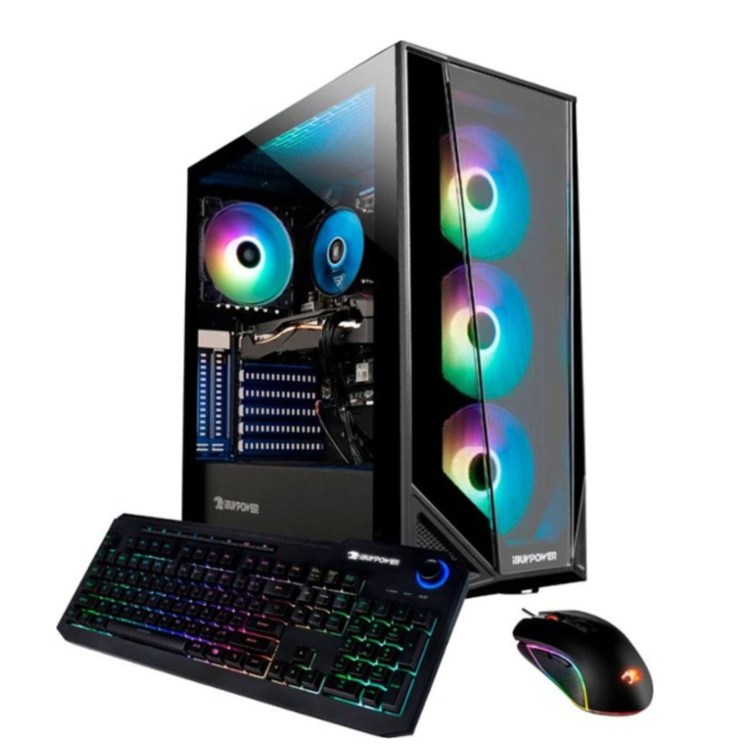 Not everything has to be a name brand, especially if you are prioritizing affordability above all else. The iBuy Power may be a bit obscure but it gets the job done with 8GB of memory, a solid state drive, and an Nvidia GeForce GTX1650. With a $600 price point, the gaming rig seems almost too good to be true. Almost as alluring as the price is the ease with which you can get started. While some gaming PC’s require additional set up work, the iBoy Power Gaming Desktop boasts the lowest learning curve with a truly plug-and-play design. This is largely the reason why this brand, despite not having mainstream success, is considered a cult-classic among those in the know of gaming PCs. For many of those who prefer PC gaming, the iBuy Power is their first foray into gaming sans console. The rig also allows for modding, though not quite to the extent of other featured computers. The iBuy Power is truly a jack of all trades when it comes to PC gaming which is why it lands on the top of this list. 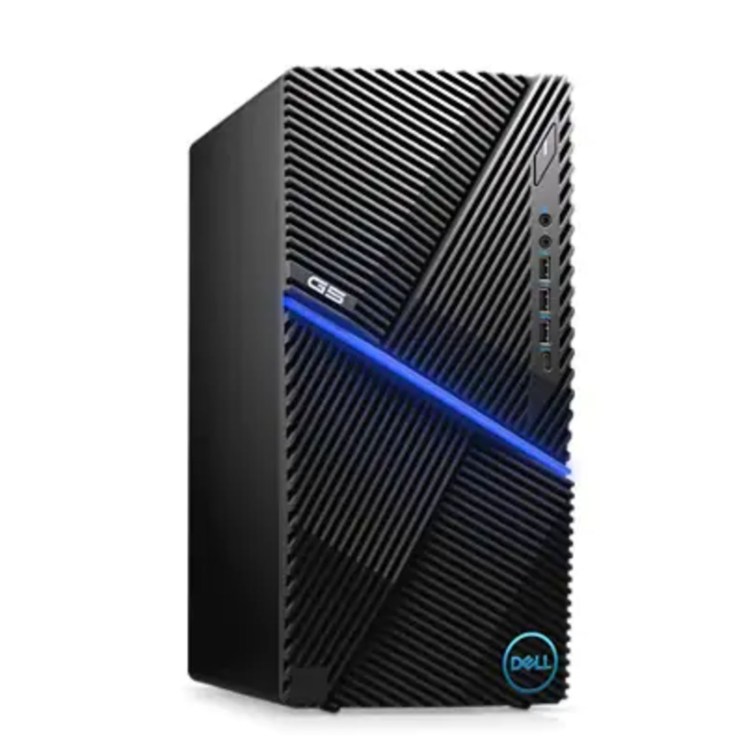 The Dell G5 is a gaming rig designed from the ground up to be affordable, at least relatively. With a base price point hovering around the $700 range, this system isn’t likely to break the budget for most people in the market for a new gaming PC. The system makes use of Intel’s 9th generation of chips, one of many minimum standards to run graphic intensive games, although the company’s Coffee Lake chipset could probably still suffice. The system pairs Intel’s 9th generation chips with Nvidia’s GTX and RTX graphic cards, considered to be among the most powerful on the market. The Dell G5 makes the top of this list for packing as much as possible into an affordable package. 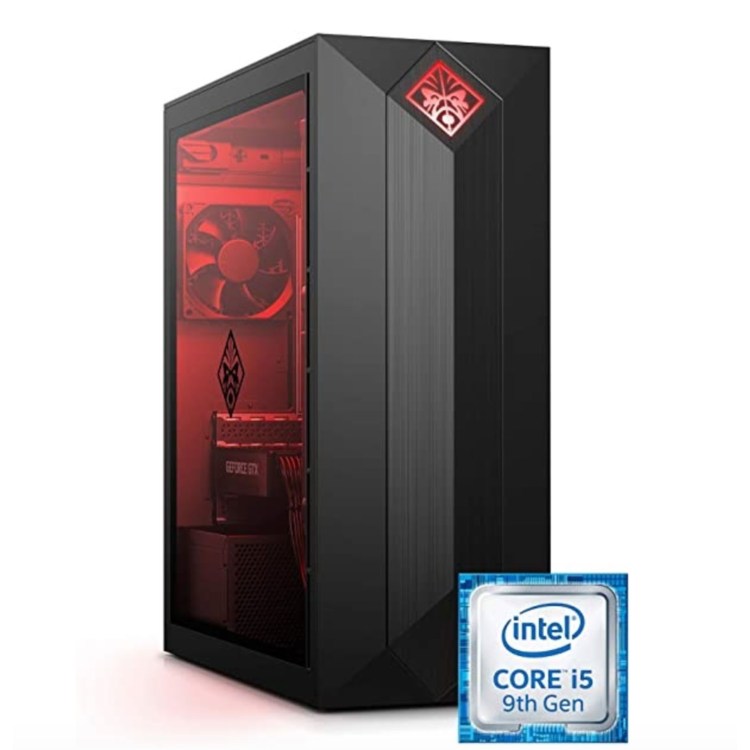 The HP Omen Obelisk finds itself squarely in the domain of a more serious gamer. A no nonsense tower, the HP Omen Obelisk comes out of the box ready to handle just about anything you can throw at it, perfect for those who want nothing more than to just game. At $959 for the base model, the HP Omen Obelisk is another piece of equipment with an impressive price and the chassis allows for some rudimentary customization.

The system plays nice with most peripheral equipment, whether it be monitors, keyboards or mouses. This is thanks to several USB ports the system comes pre-installed with. Engineers built this PC with customization in mind. Unlike other PCs that require tools, the HP Omen Obelisk allows for easy access of its internals. This makes swapping out graphic cards and the like an easy proposition. The system starts with an Intel COre i5 - 8400 with 32GB of RAM. It’s graphics come courtesy of Nvidia’s GeForce GTX 1050 Ti. 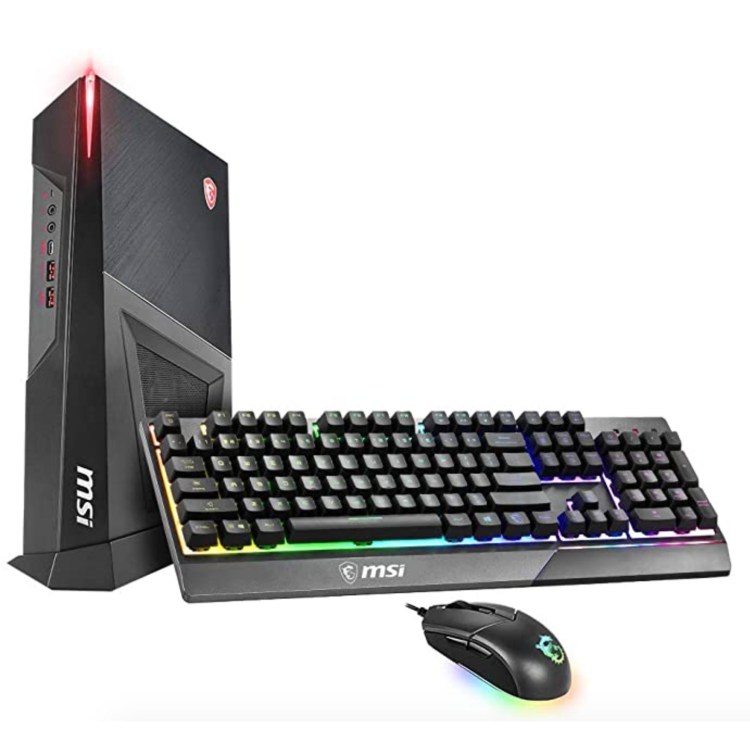 At $999, the MSI Trident is perhaps on the pricier end of the spectrum. But, for the money spent, you get a gaming PC that is future-proof for years to come. The MSI Trident comes with the 9th generation of the Intel Core i7 processor. Nvidia handles its graphics with the company’s GeForce RTX 2060 Super. This combination makes for a system that hits well above its price range.

Engineers did, however, have to cut corners to bring it down to its price point. The system boasts a slightly less than ideal 8GB of RAM but has storage of up to 1TB.

The MSI Trident 3 is one of the more popular entries on this list and the 9th generation is one of the most beloved iterations of the device. Though it allows for limited aesthetic customization, it’s internals can be drastically upgraded to compete with some of the priciest computers on the market. This makes it a staple for anyone wanting to make a tentative foray into the world of PC gaming. 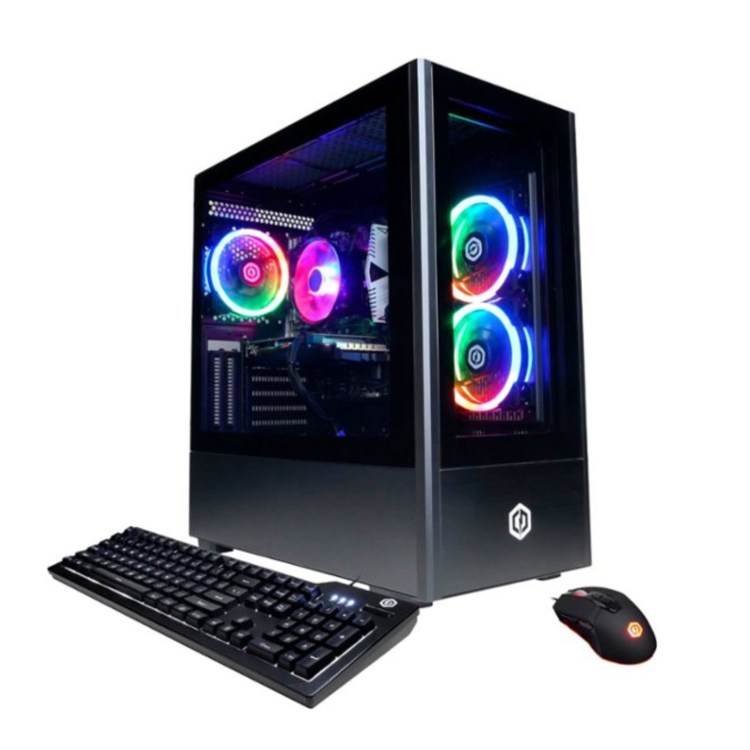 In much the same way you shouldn’t judge a book by its cover, you shouldn't judge a gaming rig by its, admittedly absurd, name. The Cyberpower Gamer Xtreme will set you back $849, to start with. The system features both the Intel Core i5-8400 and NVIDIA GeForce GTX 1660 SUPER, a combination that allows for impressive performance.

The system features a red light aesthetic that matches perfectly with its name. Like the HP Omen Obelisk, the system allows for easy access to its internals making it ideal for those who love tinkering with hardware. While increasing its specs to match more expensive rigs might be prohibitively expensive for many, the option to do just that is always there. 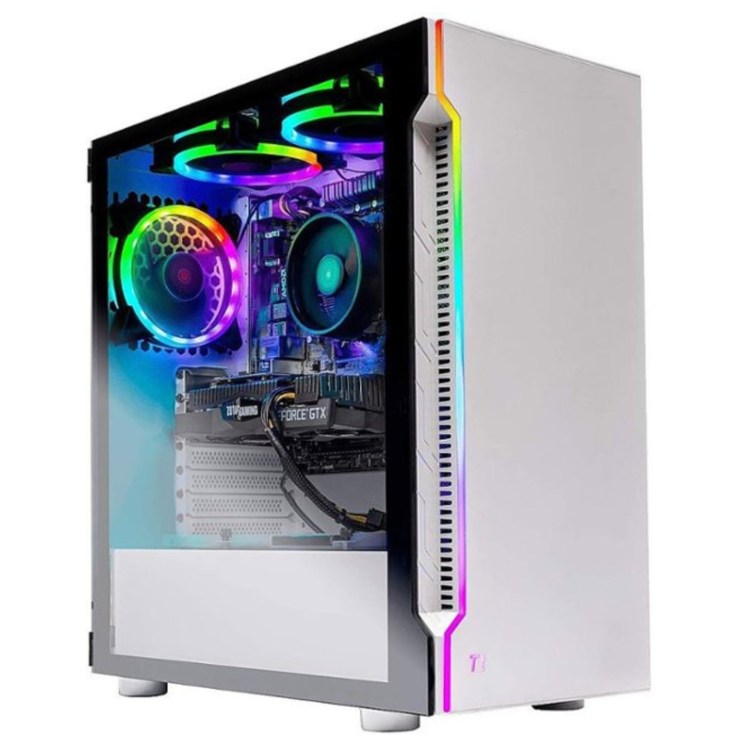 The SkyTech Archangel is the first of this list that has the eye-catching aesthetic that high-end gaming PCs are famous for. The SkyTech Archangel makes use of lighter colors and strategically placed internal lights to give it the look of hardware from the distant future.

Unfortunately, its internals aren’t as impressive as it looks. The system comes stock with an AMD Ryzen 5 Series CPU and a Nvidia GTX 1050 Ti 4GB GPU. It has 16GB of ram and 500GB of storage and does not come with a solid state drive, though you can add one if needed.

Those specs don’t seem as daunting when you consider the system is $850 to start, making it one of the cheaper items on this list. 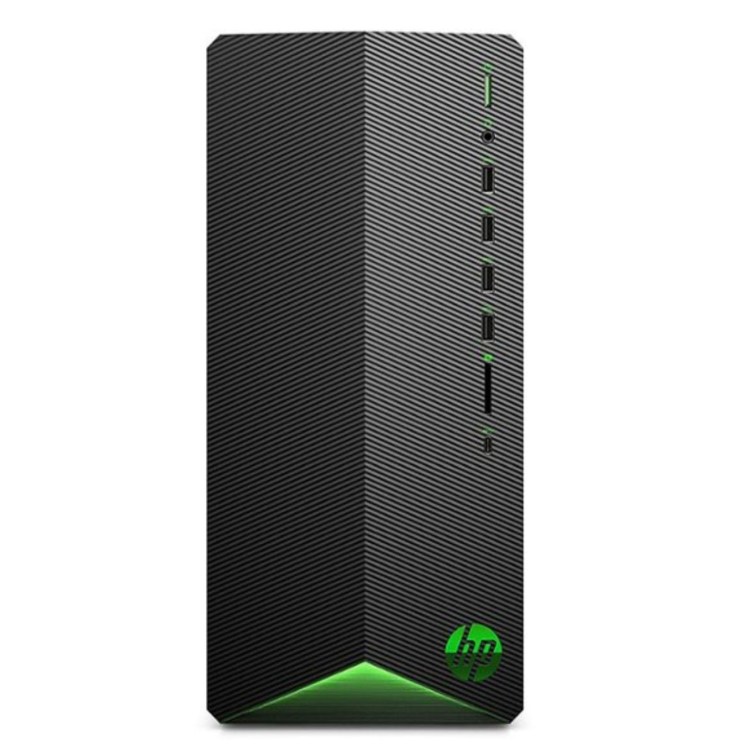 No frills, no neon rainbows, only gaming. If you were to ask me what PC to get to ease into PC gaming I would direct you to the HP Pavilion Gaming Desktop. At a starting price of around $650, the HP Pavilion Gaming Desktop provides quite the bang for your buck. It comes standard with an Intel 10th Generation Core i5 and an NVIDIA GeForce GTX 1650. With 8GB of Ram and 256GB of storage, the HP Pavilion Gaming Desktop is able to keep up with and sometimes even outperform gaming rigs that are several times more expensive. It’s a system with staying power, one that you’ll continue to play even as games learn to take advantage of next generation hardware. Will it remain relevant by the end of the upcoming generation? Probably not, but, then again, at its current price point, it doesn’t really need to. 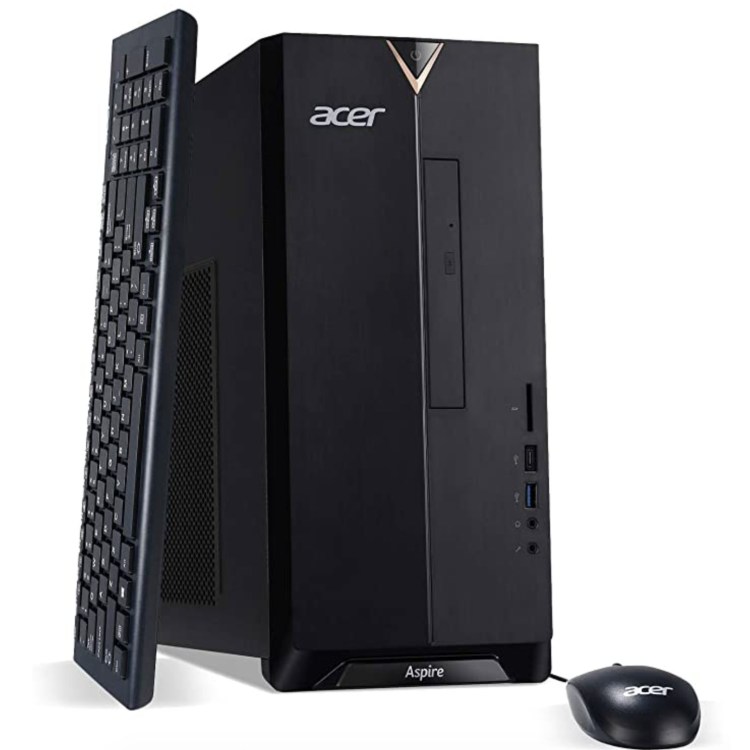 Acer has a reputation for making cheap versions of high end products. It’s a reputation the company hasn’t been able to shake off despite the fact that it has created some quality computers in recent years. One of those is the Acer Aspire TC-895-UA91. It takes the award for least flashy gaming desktop on this list. But don’t judge it by its appearance. This model boasts stellar performance by taking full advantage of its internals. The CPU and GPU are Intel Core i3 and Intel UHD Graphics 630, respectively. It comes with a solid state drive, which isn’t always the case with gaming rigs at around this price range. The included SSD is 512 GB. What is most alluring about this rig is that it is, for the most part, future proof. While other gaming PCs simply won’t be able to withstand the rigors of games three to four years in the upcoming generation, this model will likely only need a few internal upgrades, making this system truly a bang for your buck. 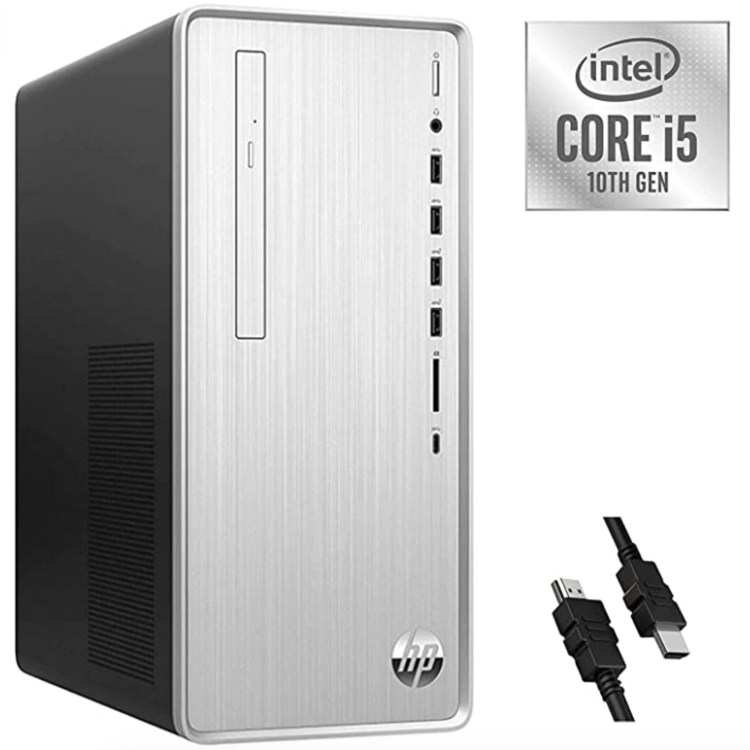 The HP Pavilion line of computers has more than one contender when it comes to cheap gaming rigs. The 10th Gen Flagship HP Pavilion is another no-nonsense computer that makes up for its lack of aesthetics with a Core i5 CPU and a host of proprietary parts. The system will set you back $799. You get what you pay for, which means you shouldn’t expect this computer to be able to handle Cyberpunk 2077 in 4K. Then again, the same can be said for most of the gaming rigs on this list. The HP Pavilion will be able to handle most games at modest settings and it will do that without breaking your budget and that, ultimately, is the primary concern for most in the market for a cheap rig. 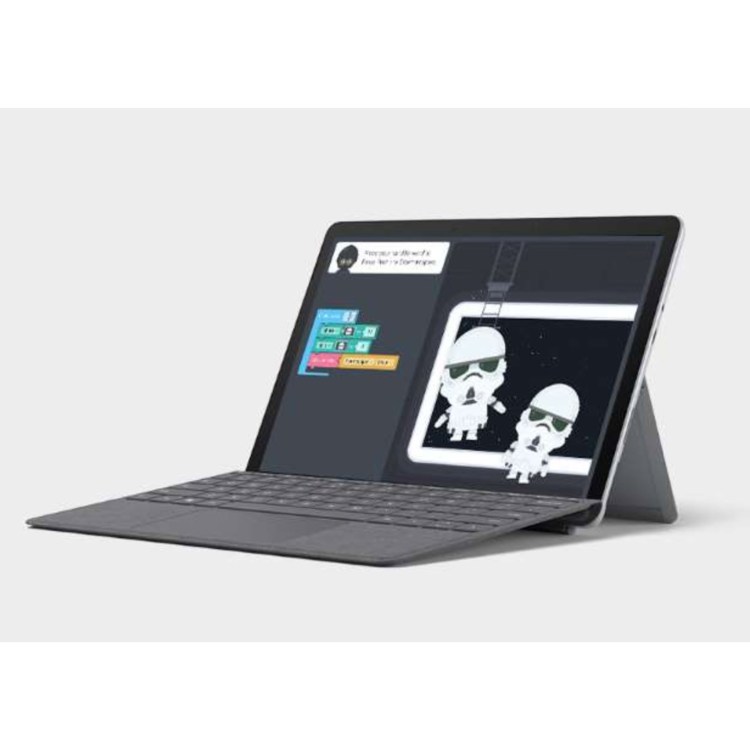 With all this talk of gaming rigs, it’s easy to forget that computer towers aren’t the only things that can play games. Laptops, and even tablets, have come a long way in recent years. Gone are the days of laptops running hot and overheating at the mere mention of Crysis. Modern laptops and their tablet counterparts are able to keep up with mid-tier gaming rigs. It would be foolish for those in the market for a gaming computer to overlook them in favor of a super-cheap tower that may or may not have the same ability to play AAA titles.

The Surface Go 2, while far from perfect as a gaming rig, is perfectly competent at playing just about any game you throw at it. Doubly so if you’re blessed with a solid enough internet connection to make use of a gaming cloud service. While services like Stadia and others might have been critically panned, largely for reasons only tangentially related to the services themselves, they are a solution for gaming on a system you fear might not be able to handle the rigors expected of a top tier gaming rig.

If you want something done right, sometimes you have to do it yourself. Building your own personal gaming rig might seem like a daunting task, but in reality, it isn’t nearly as difficult as most people would imagine it to be. There was probably a time when putting together your own personal computer required some measure of technical expertise, but these days, the practice has gone mainstream. Everyone, from the Twitch streamer next door to UFC fighters and celebrities like Terry Crews, has documented themselves successfully putting together their own gaming rigs. There are kits you can buy that simplify and streamline the process, and endless online how-tos.

Most importantly, opting to put together your own gaming rig allows you to have direct control over what goes into your computer. You can add this and skip that to make a gaming PC as cheap as you want it be. For example, I likely wouldn’t have to pay more than $300 to put together a gaming rig with a CPU consisting of an AMD Ryzen 3 3200G with an Ubuntu user interface and other cheap parts. It is, by far, the most cost effective method.